The most valuable metal detecting finds ever

Queens Jewels, LLC / Facebook
From coin hoards to shipwrecked treasures, metal detector finds can hold huge historical significance and be worth millions of dollars. So it’s no wonder a host of hobbyists are out there trying to strike it lucky. Click or scroll through to find out 26 of the most valuable metal detector finds of all time, adjusting pre-2010 valuations for inflation.

In January 2019, metal detectorist Michelle Vall was searching in Balloch, Loch Lomond, Scotland, when she struck gold. The gold in question was a 17th century ring, dated back to between 1640 and 1680, and it was believed to have once belonged to a courtier of King James II of England before he took the throne. In September, it went up for auction and sold for an impressive $18,000 (£14k). It wasn’t the first time Vall had found treasure: in 2017 a rare gold coin she had found sold for $52,800 (£40.8k) at auction. 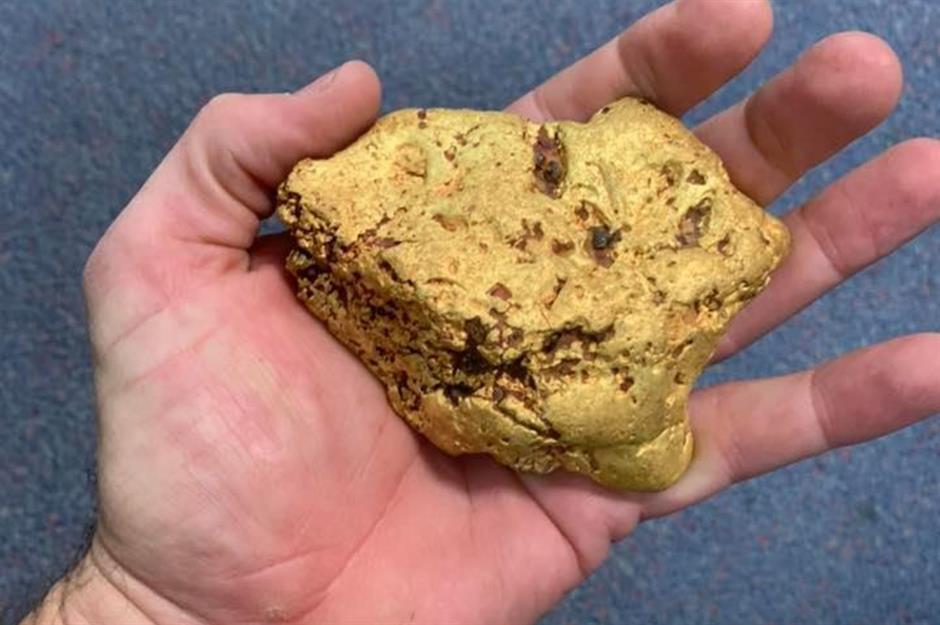 One lucky metal detectorist struck gold while prospecting in Western Australia, chancing across this giant 3lb (1.4kg) gold nugget in May 2019. The unnamed man walked into a shop in Kalgoorlie, Finders Keepers Gold Prospecting, to show them his discovery. Such a large gold nugget is rare to find and the treasure was valued at AU$100,000 ($66.9k/£51.8k). 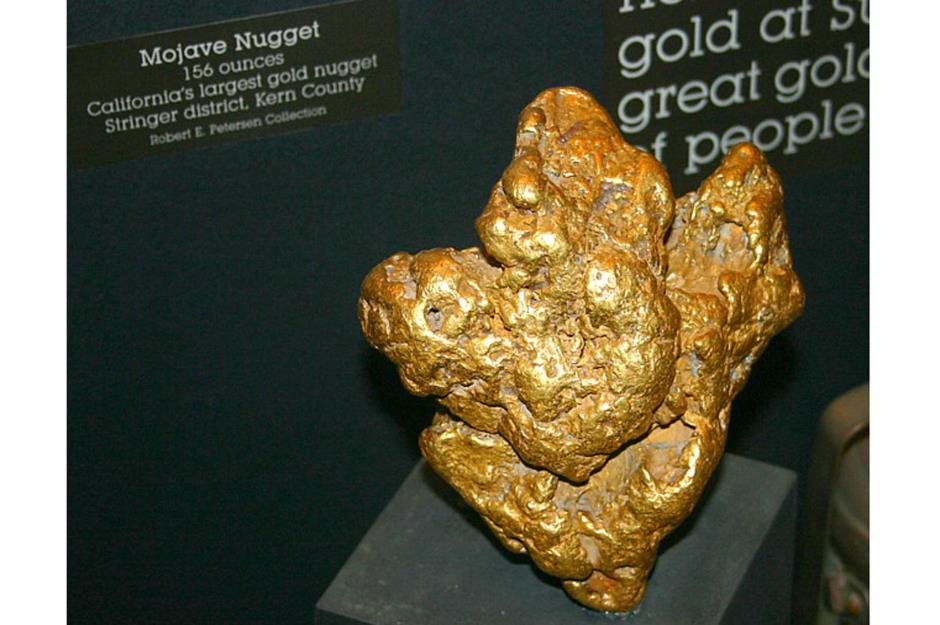 The largest gold nugget discovered in California, this famous 156-ounce chunk of gold was found in 1977 in the Mojave Desert by prospector Ty Paulsen, using his trusty metal detector. In October 2014, the nugget was sold for $400,000 (£310k) to Margie and Robert E Petersen, who later donated it to the Natural History Museum of Los Angeles County. 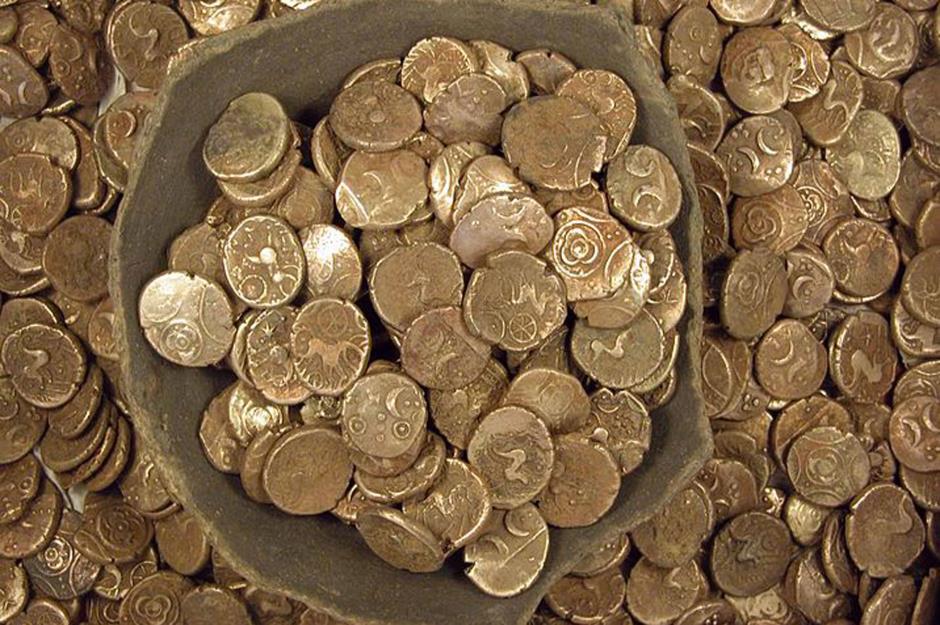 Using metal detectors, Michael Darke and Keith Lewis located this hoard of 840 Iron Age gold coins back in March 2008 in a field at Dallinghoo near Wickham Market in England. Following a two-month long campaign to keep it in Suffolk, in June 2011 Ipswich Museum announced they had managed to raise the $407,400 (£315k) needed to purchase the coin stash. The reward was split between Darke, Lewis and the landowner Chris Green. 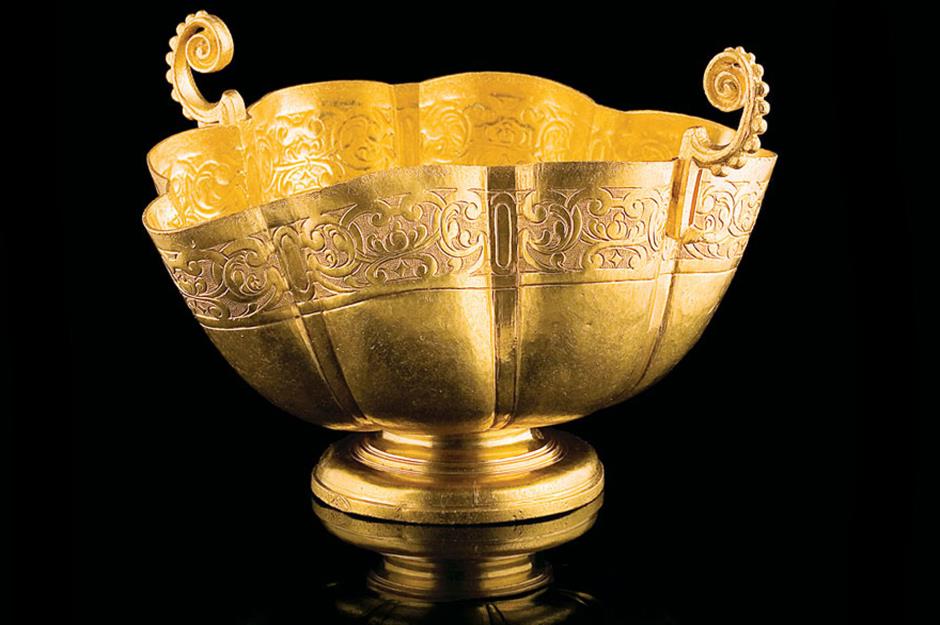 This incredible find was discovered by a diver involved in searching the Santa Margarita shipwreck from 1622 off the Florida Keys in June 2008. Michael DeMar thought he'd come across a discarded beer can when his metal detector beeped during the dive, yet amazingly he'd discovered a gold chalice that was lost in the shipwreck of the Santa Margarita. In August 2015, the chalice sold at auction in New York for $413,000 (£319k). 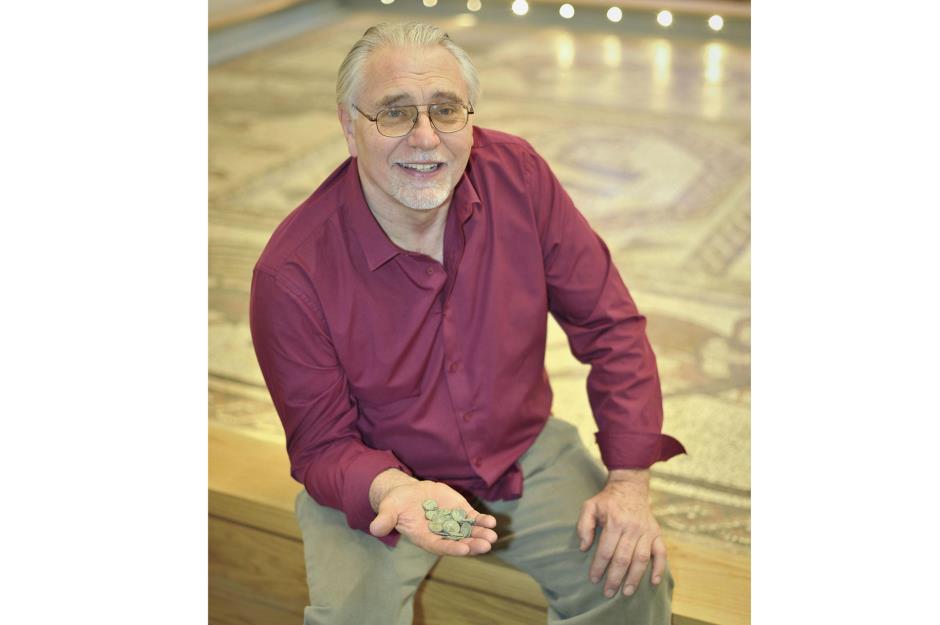 Buddies Mark Hambleton and Joe Kania hit the headlines in December 2016 when they discovered four Iron Age gold torcs in a field in Leekfrith, Staffordshire, England. Dating from 400-250 BC, the torcs are thought to be the oldest pieces of Iron Age jewellery found in the UK. At least 80% gold, the hoard was valued in 2017 at $420,400 (£325k). 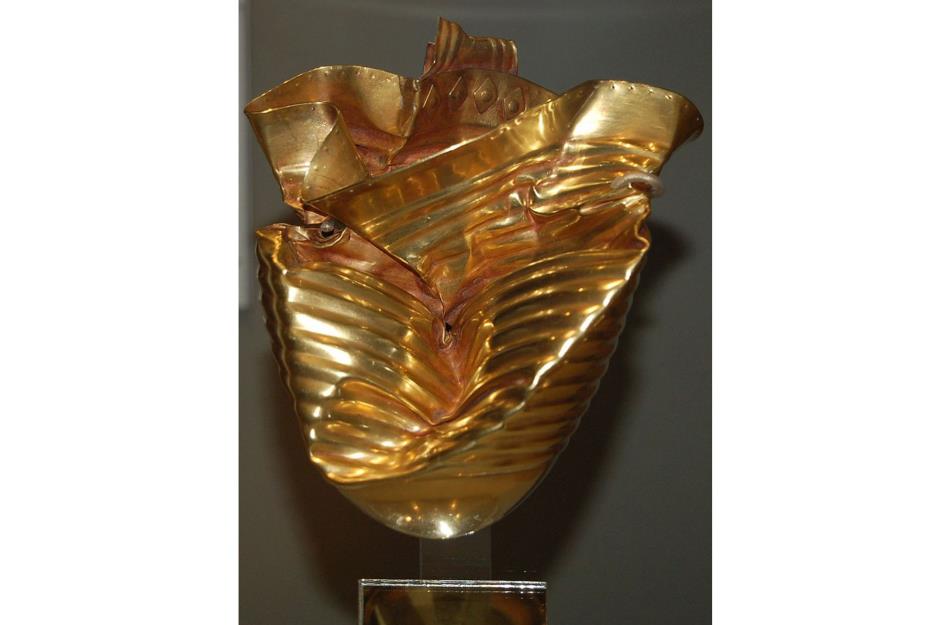 In November 2001, metal detectorist Cliff Bradshaw stumbled upon this crushed gold cup in a field near Sandwich, England, which turned out to be a Bronze Age chalice dating from 1700-1500 BC. In 2002, the artefact was snapped up by the British Museum for £270,000, which would equal £442,500 ($572k) today when adjusted for inflation, and the cash was split between Bradshaw and the landowner.

In September 1998, amateur treasure hunter Martin Elliot was trying to teach his cousin to use a metal detector, when he came across a Roman coin just 10cm below the surface of the ground. Digging deeper, the pair discovered a massive hoard of more than 9,000 silver denarii coins, dating between 1st century BC and 3rd century AD. The coins, named after Shapwick in Somerset, England, where they were found, were valued at £265,000 in 2000, the equivalent of £449,000 ($580k) today. They were sold to Somerset County Museum at this price. Even more surprisingly, the hoard was reportedly found using a £2 ($2.60) metal detector.

This ancient stash of gold torcs and bracelets was found by amateur treasure hunters Michael Rutland and Gordon Heritage in a field near Milton Keynes, England, in September 2000. The hoard was purchased for £290,000 by the British Museum, which would equal £491,800 ($635.6k) today, with the finders receiving a 60% cut from the sale.

In February 2005, tree surgeon Maurice Richardson couldn't believe his luck when his metal detector beeped in a field in Newark-on-Trent, England and he unearthed this stunning Iron Age gold alloy torc. Newark Museum bought the torc for £350,000 in 2006, equivalent to £510,200 ($659k) today, and the proceeds of the sale were divided between Richardson and the landowner, Cambridge University. 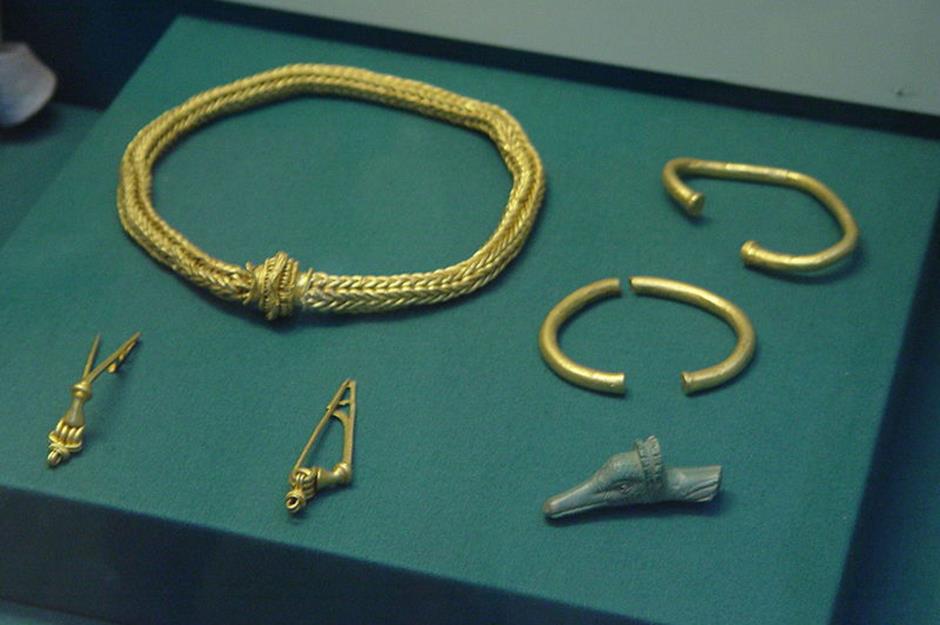 This treasure of Iron Age gold jewellery was discovered in December 2000 in a freshly ploughed field near Winchester, England by retired florist Kevan Halls. The trove of exquisite gold pieces was purchased by the British Museum for £350,000 in 2003, which would be the equivalent of £557,500 ($720.5k) in today's money.

In September 2009, rookie metal detectorist David Booth found this hoard of Iron Age gold torcs in a Scottish field during his very first treasure hunt – some people really do get all the luck. The hoard earned Booth a reward of £462,000 at the time, which would be equivalent to £596,840 ($771k) in today's money. 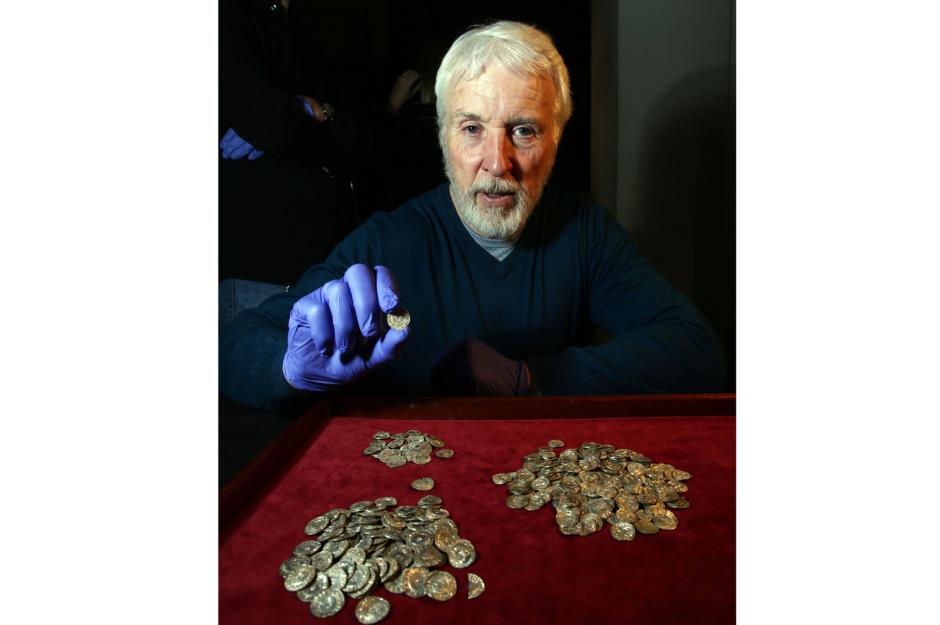 This hoard of more than 5,000 late Anglo-Saxon coins was found buried in a field near Lenborough, England in 2014 by metal detectorist Paul Coleman. In June 2016, the Treasure Valuation Committee gave them a valuation of $1.75 million (£1.35m), which went to Coleman. The coins were purchased by the Buckinghamshire County Musem in 2017 after raising money from donations and grants. 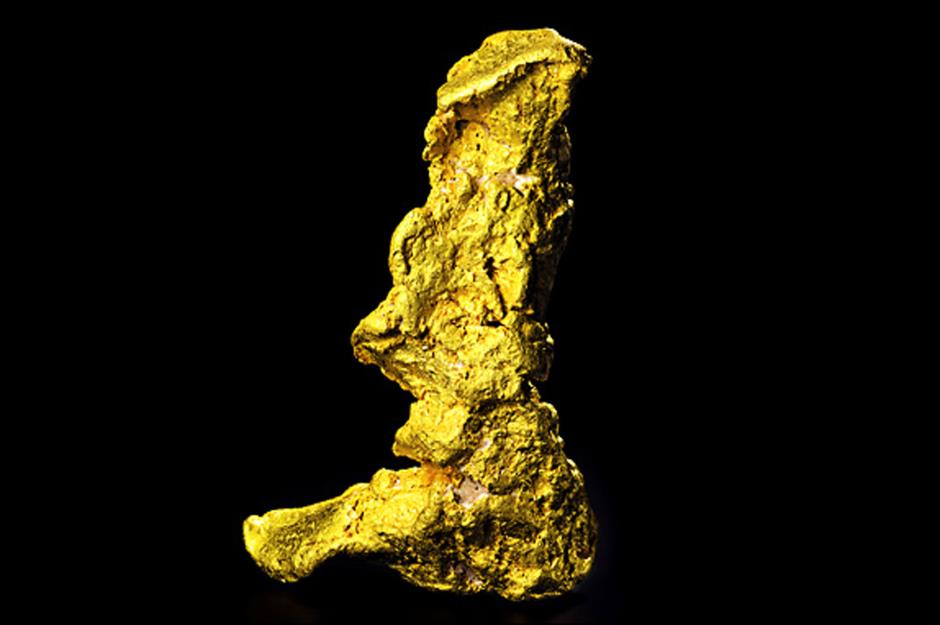 The largest surviving gold nugget found in the Western Hemisphere, the 389-ounce Boot of Cortez was discovered in 1989 by a prospector in Mexico's Sonoran Desert using a cheap metal detector. A lucrative find, the huge boot-shaped nugget went on to fetch $1.55 million at auction in 2008, equivalent to $1.85 million (£1.4m) today, adjusting for inflation.

Metal detecting hobbyist Derek McLennan struck lucky when he chanced upon a treasure trove of more than 100 ingots, jewellery, gold and silver from the Viking period in a field in Dumfries and Galloway, Scotland in 2014. Three years later, National Museums Scotland acquired the hoard for a whopping £2 million ($2.6m).

The largest gold nugget ever found using a metal detector, the 960-ounce Hand of Faith was discovered by Kevin Hillier near Kingower, Australia back in September 1980. Six months after being found, the giant gold nugget was, fittingly, sold to the Golden Nugget Casino Las Vegas for $1 million, which would be equal to around $2.83 million (£2.2m) in today's money. 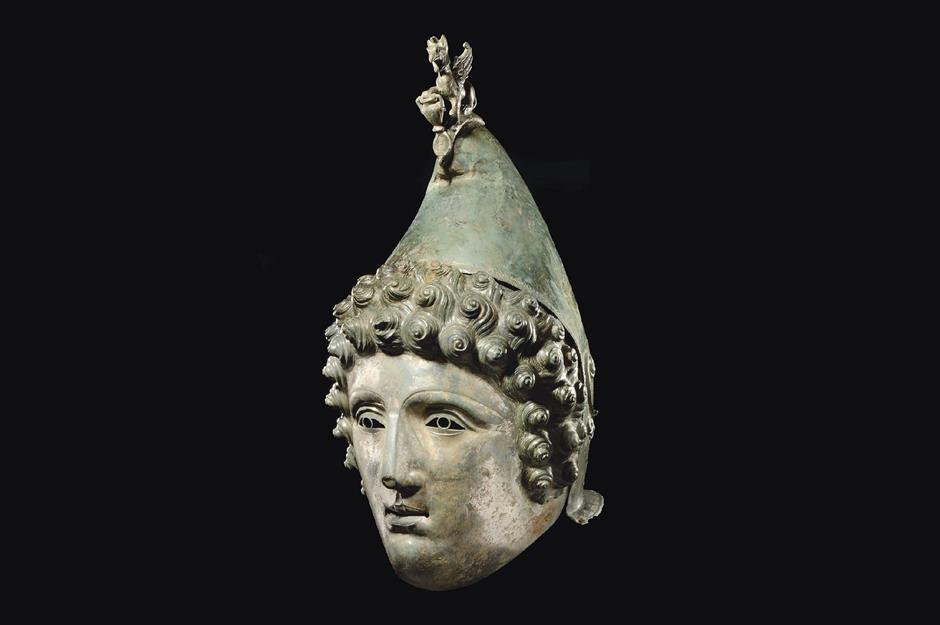 This rare bronze helmet, discovered at Crosby Garrett in Cumbria, UK, is one of just three of its type ever found in the UK. Discovered in May 2010 by an unnamed metal detectorist, the helmet was in 67 pieces but was reconstructed by auction house Christie’s before going up for sale. Following a telephone bidding war, the winning bidder paid a massive £2.3 million ($3m) for the helmet – more than eight times the estimated price. 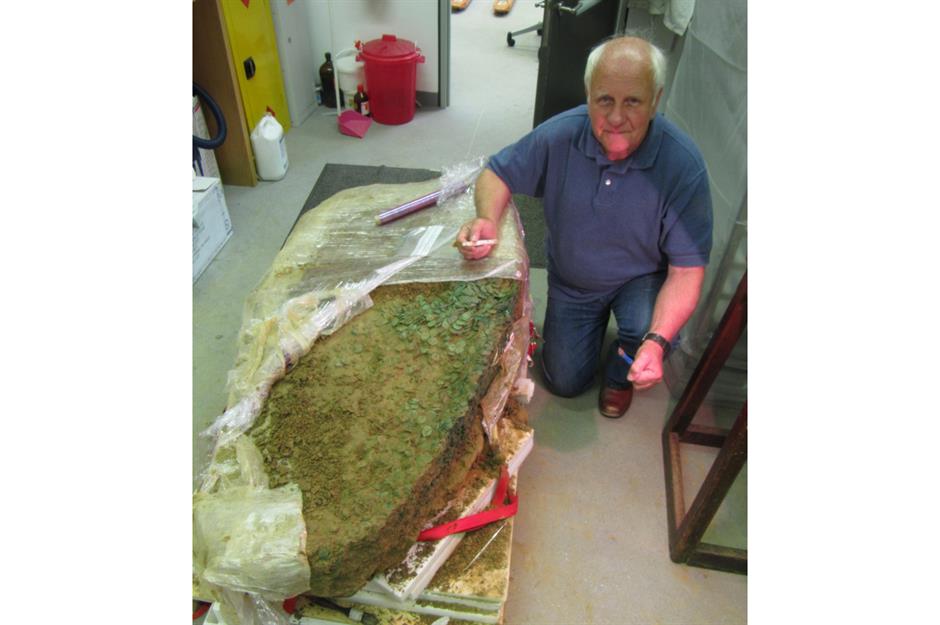 Discovered by two metal detectorists in a field in Jersey, England, this hoard of 74,000 Celtic coins, along with torques and gold and silver jewellery, was recently valued at up to £2.5 million ($3.2m) by the Treasure Valuation Committee. The giant clump of corroded-together metal was discovered in June 2012, by Reg Mead and Richard Miles, and was declared the world’s largest Celtic coin hoard ever found.

It’s a high-value hoard – with a twist. In June 2015, metal detectorists George Powell and Layton Davies (pictured arriving at Worcester Crown Court late last year) found a selection of Anglo-Saxon coins and jewellery on a farm near Leominster, Herefordshire, in the UK. The hoard contained 300 coins as well as a gold ring, bracelet and crystal ball pendant, valued at an estimated $3.9 million (£3m) in total. Yet the treasure hunters didn’t declare the hoard and instead illegally sold much of it off to the black market. In November 2019, the men and two accomplices were found guilty of the theft, with "leader" Powell receiving a sentence of 10 years, while Davies was set to be jailed for eight-and-a-half years. As much as 90% of the hoard remains missing.

In 2015, diver William Bartlett, along with a treasure hunting team, discovered treasure worth $4.5 million (£3.5m) from a shipwreck from 1715 off the coast of Florida. The haul included 350 gold coins, nine of which were rare examples known as 'royal eight escudos', which were still in impeccable condition after 300 years underwater.

Now discover the stories of America's luckiest ever treasure hunters 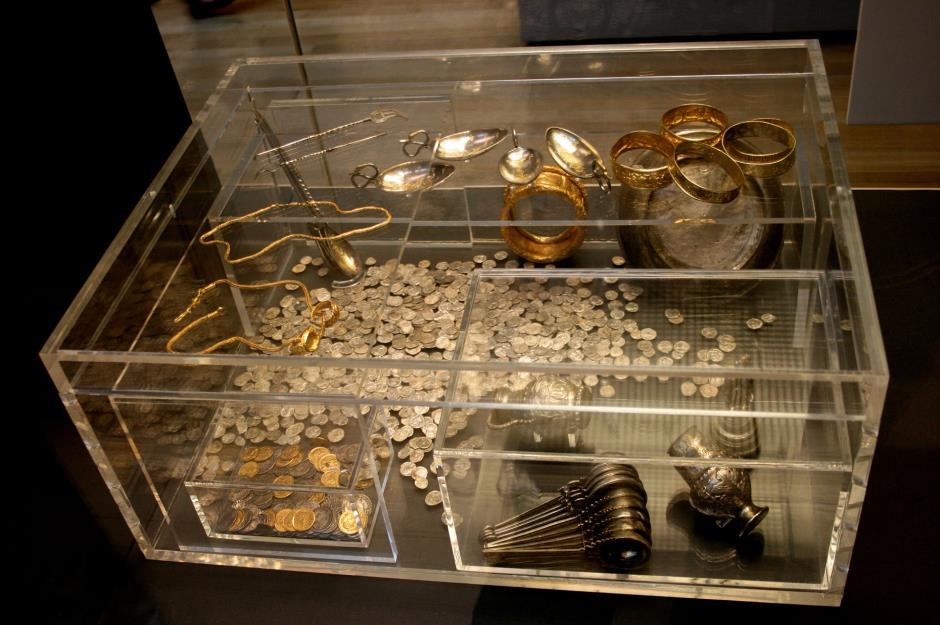 The largest stash of late Roman gold and silver discovered in Britain, the Hoxne Hoard was found by metal detecting whiz Eric Lawes back in November 1992 buried in farmland near Hoxne, England. Valued at £1.75 million in 1993, the find is worth £3.6 million ($4.7m) in today's money. The money was shared between Lawes and the farmer Peter Whatling.

This metal detecting discovery is the largest hoard of Anglo-Saxon gold and silver metalwork ever found. Terry Herbert stumbled upon the stash of 4,000 artifacts in a field in Staffordshire, England belonging to farmer Fred Johnson back in July 2009. The pair shared a windfall of £3.28 million when the hoard was bought jointly by the Birmingham Museum and Art Gallery and the Potteries Museum & Art Gallery, that's the equivalent of £4.4 million ($5.7m) today. 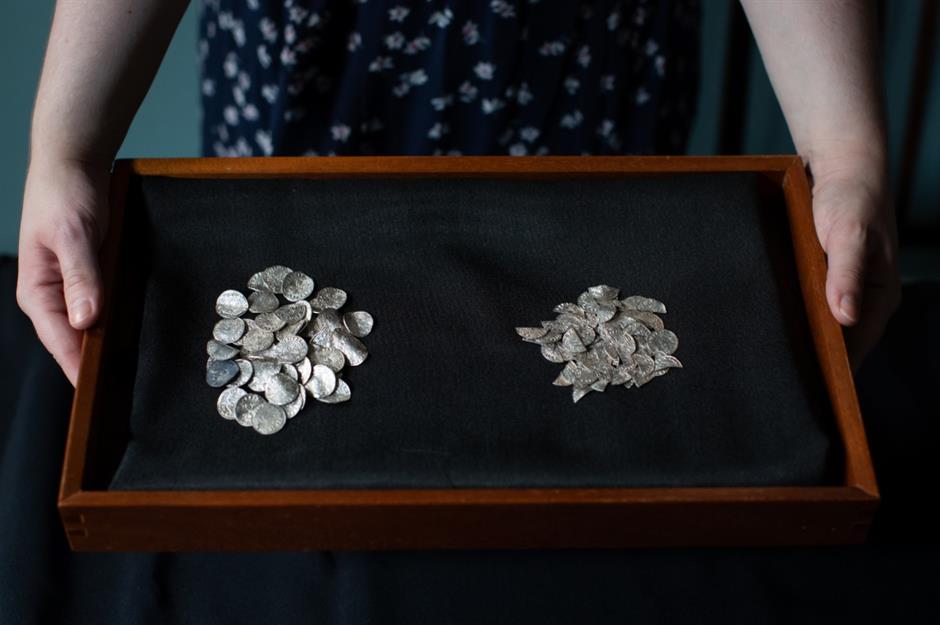 You might think tax evasion is something new – but as a recent discovery in the Chew Valley, Derby, goes to show, it may have been around for centuries. The hoard, discovered by couple Adam Staples and Lisa Grace in August 2019, consisted of 2,528 coins from the year 1066, some of which had been tampered with and showed different designs on either side. The discovery was given an estimated value of £5 million ($6.5m) and is the largest Norman treasure find since 1833. 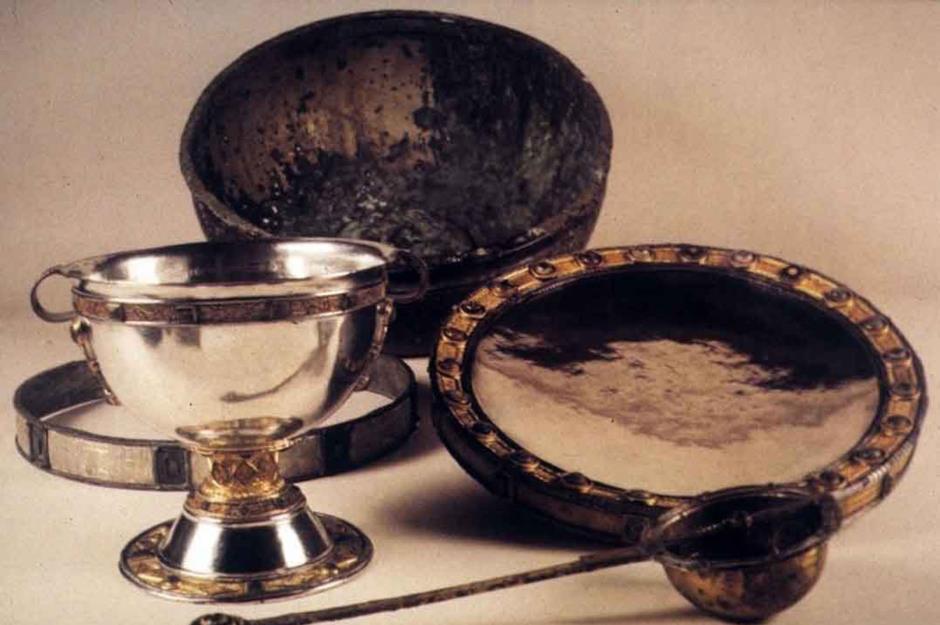 One of Ireland's most important archaeological finds, the Derrynaflan Hoard was discovered by Michael Webb and his son Michael Junior in February 1980 near Killenaule, County Tipperary. The Webbs failed to get the correct permission to dig and, as a result, the treasure of five 9th-century liturgical vessels was confiscated by the authorities. The pair ended up receiving just 50,000 Irish pounds for it, the equivalent of €124,000 ($136k/£105k) today, despite it having been valued at 5.5 million Irish pounds in 1986, the equivalent of €13.7 million ($15m/£11.6m) today. 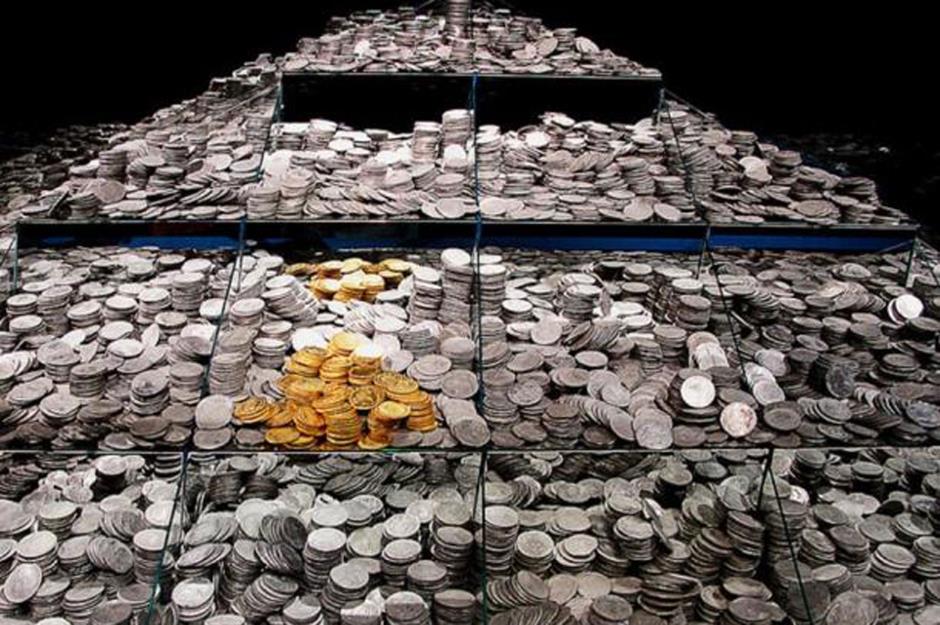 In 2007, Salvage firm Odyssey Marine Exploration used metal detectors to find a staggering stash of gold and silver coins, which went down with a Spanish frigate off the coast of Portugal in 1804. Valued at $500 million at the time, which would be $619.7m (£480m) in today's money, the treasure was eventually claimed by the Spanish government following a legal battle with Odyssey in the US courts.

Now find out about the world's greatest shipwrecks and their treasures