The world's most valuable autographs – and how to spot a fake 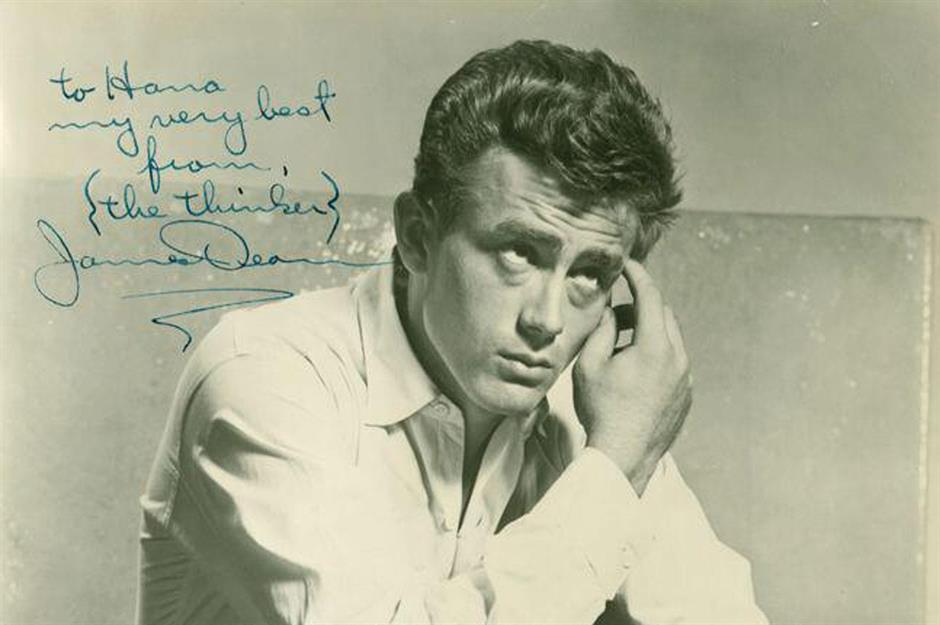 Paul Fraser Collectibles
Got the odd celebrity autograph gathering dust in your loft? It could be worth a fortune. We reveal the most valuable signatures in the world, from stars who are still with us, to those who have sadly passed away, according to Paul Fraser Collectibles' PFC40 Autograph Index. First let's start with those you can still get a signature from...

Wikimedia / Pbdesh01
An autograph from the head of the Catholic Church, Pope Francis, is the 10th most valuable for a living person at $227 (£175) in 2017. However, the value of his autograph has not risen in the past three years, making it one of the less appealing investments. Perhaps a little strangely, the price of his autograph is also the same as that of the President of Russia...

Win McNamee / Getty Images
Meanwhile, a signed photograph from the current President surpasses Barack Obama at $777 (£600) in 2017. This is a 33.3% increase on 2016, which is unsurprising as the American businessman and reality star took on the role of POTUS at the beginning of 2017 raising his profile around the world.

Astrid Stawiarz / Getty Images
A signed picture of Madonna could fetch as much as $1,289 (£995). The original Queen of Pop is still going strong at 60 years old, and has announced that she will be releasing more music next year.

Clodagh Kilcoyne - WPA Pool / Getty Images
Prince Harry's autograph was the best performing signature in the 12 months to October 2017, rising in value by 100% from $972 (£750) to $1,943 (£1.5k). While he was not yet engaged to now wife Meghan Markle, their relationship was under a lot of engagement speculation since they met in July 2016, especially after Markle's interview with Vanity Fair where she said: "We're in love. I'm sure there will be a time when we will have to come forward and present ourselves and have stories to tell..."

George Stroud / Daily Express / Hulton Archive / Getty Images
Ringo Starr's signature may not seem like a rare thing to get hold of, but the former Beatles drummer announced via video message in 2008 that he was going to stop signing memorabilia. Now, the 78-year-old's signature can fetch up to $1,943 (£1.5k), up 20% on 2016.

Toby Canham / Getty Images
JK Rowling – the best-selling author behind the Harry Potter books – is used to signing books, and a signed copy of one of her tomes could get you $2,526 (£1,950). That said, there has been no change over the past three years in the value of Rowling's signature. 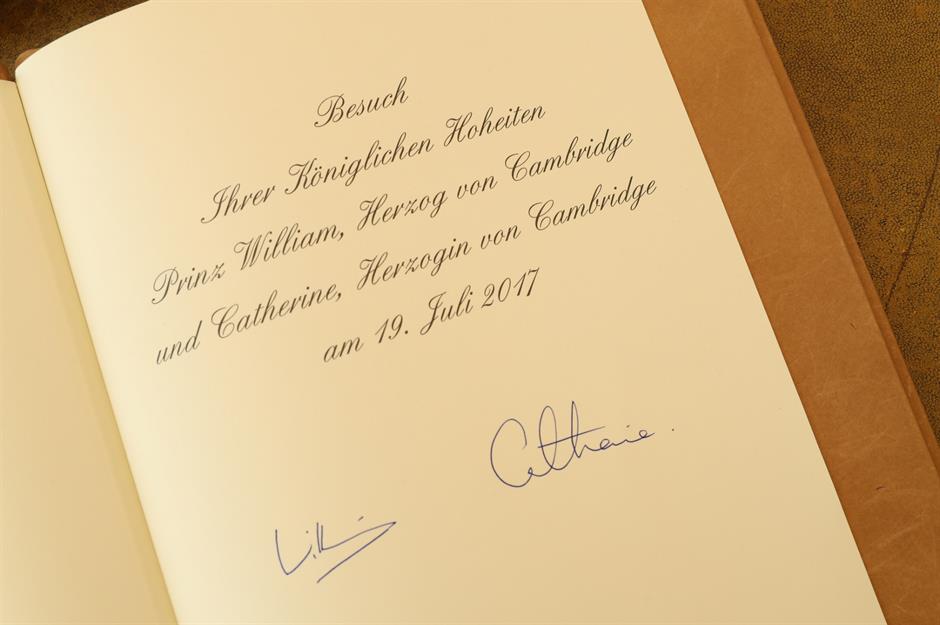 Sean Gallup / Getty Images
A signed album page by the future King of the United Kingdom unsurprisingly is worth more than that of his brother, Prince Harry. However, instead of the 100% increase in worth for Harry's signature, William's has only risen by 10% since 2016.

Out of the living celebrities, Sir Paul McCartney has the most valuable signature according to the Paul Fraser Collectibles' PFC40 Autograph Index. Commanding $3,822 (£2,950), the value of the 76-year-old's signed name has risen by 18% since 2016.

As well as autographs, check out the World's most valuable photos 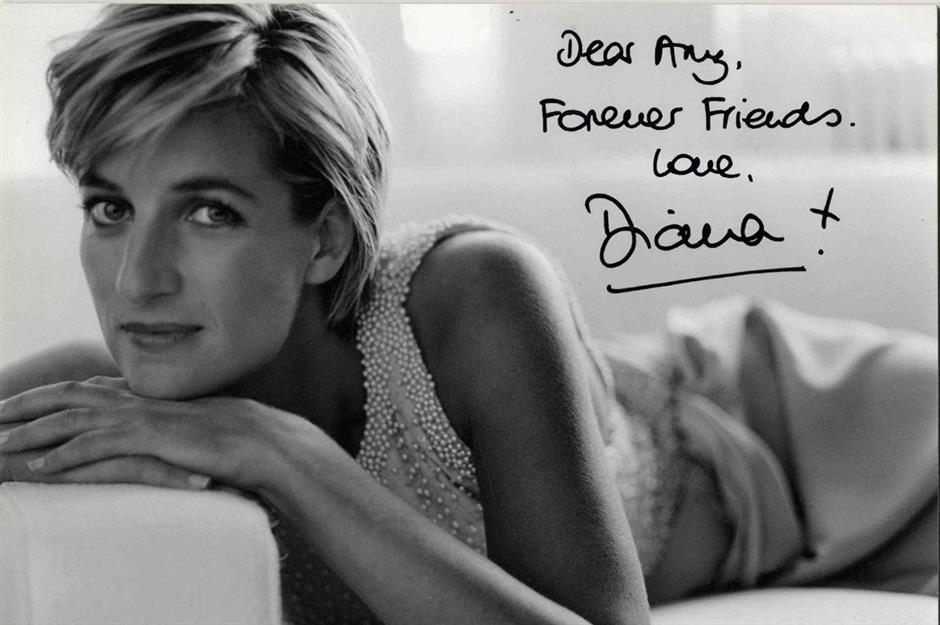 While getting the autograph of a living celebrity can be lucrative as we've proven, the real money is often to be found in the autographs of those who have already passed away. Here we list the most valuable autographs, and how to spot if you've got a fake...

Read: 27 collector's items you might not know you own 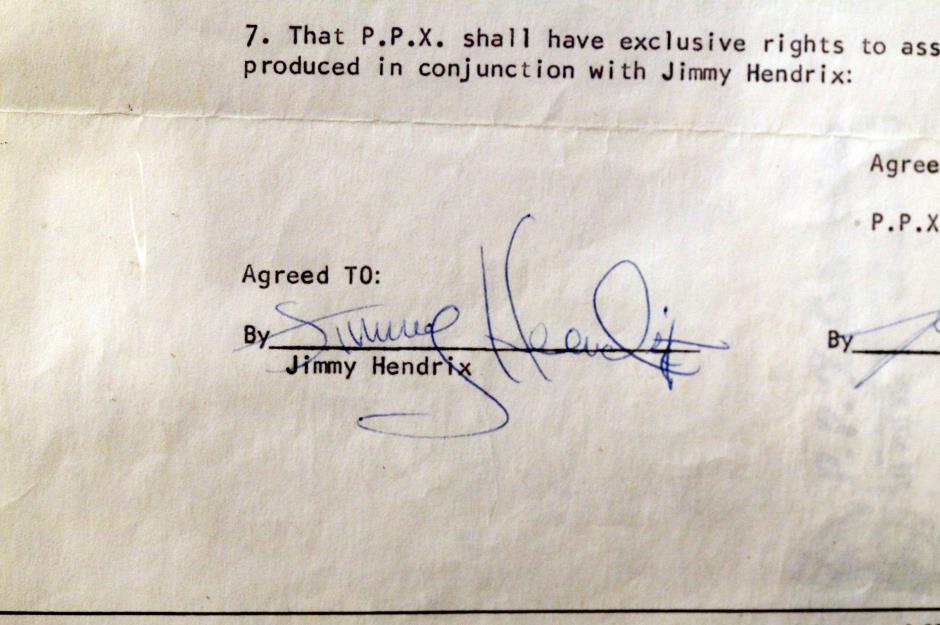 Astrid Stawiarz / Getty Images
Autographs of rock or movie stars who died young – particularly members of the infamous '27 Club' – command premium prices, and Jimi Hendrix's is no exception. Examples of his signature average $9,717 (£7,500) but the most prized autographs are worth a lot more – a signed Jimi Hendrix contract sold at auction for a staggering $200,000 (£136k) back in 2009. 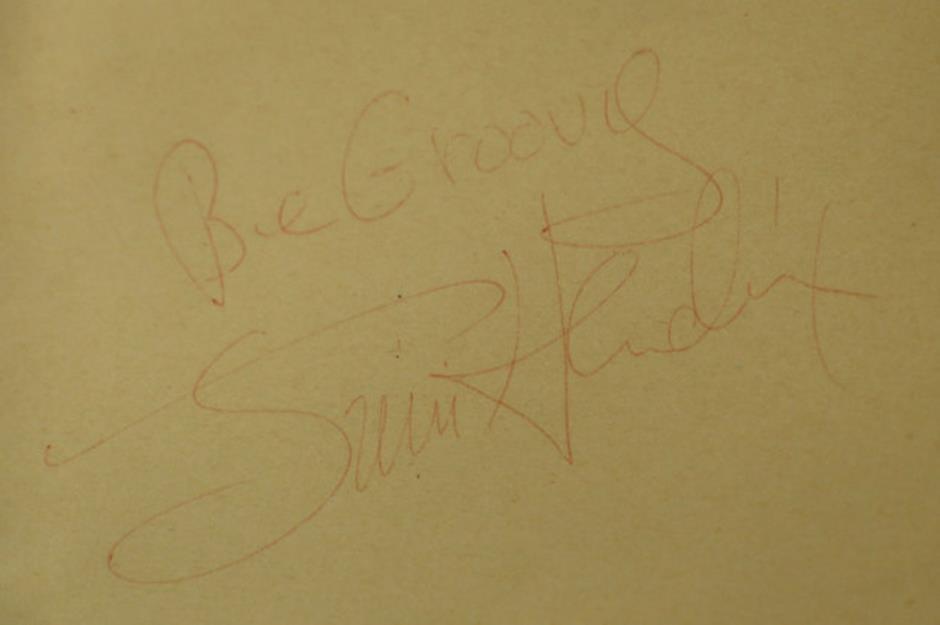 Courtesy Autograph Magazine
Jimi Hendrix autographs are some of the most faked according to the latest PSA/DNA Autograph Report, which lists the most 'dangerous', ie forged, celeb signatures. On first inspection, this dubious example may look genuine but the overly flamboyant capital 'J' and uncharacteristic flow actually show it's bogus. 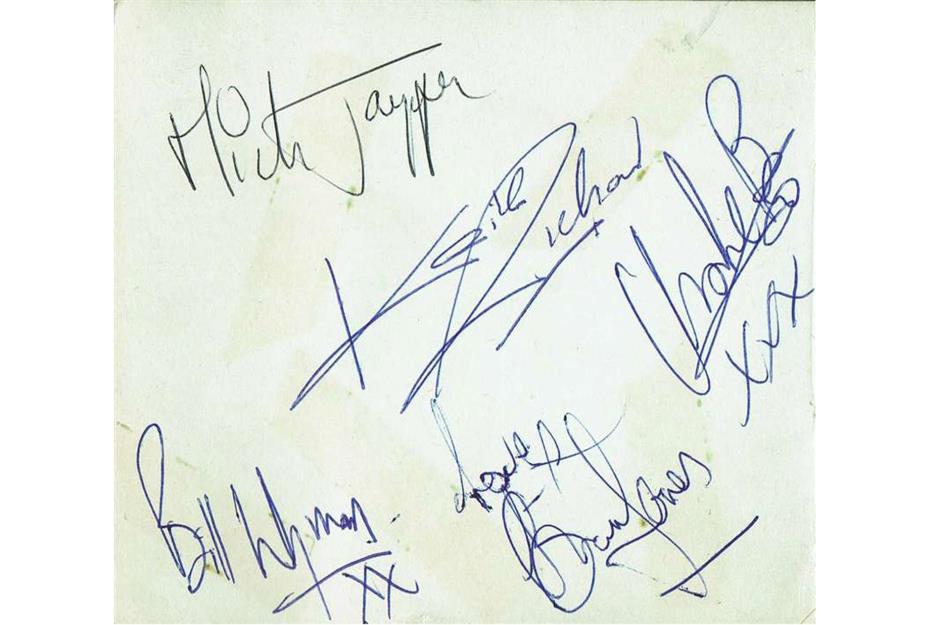 Paul Fraser Collectibles
Autographs of legendary 60s bands are much sought-after. Signed Rolling Stones memorabilia is particularly valuable and makes for a lucrative investment – the average price of a signed photo of the original 1960s line-up of the Stones has increased in value by nearly 500% over the past 11 years. 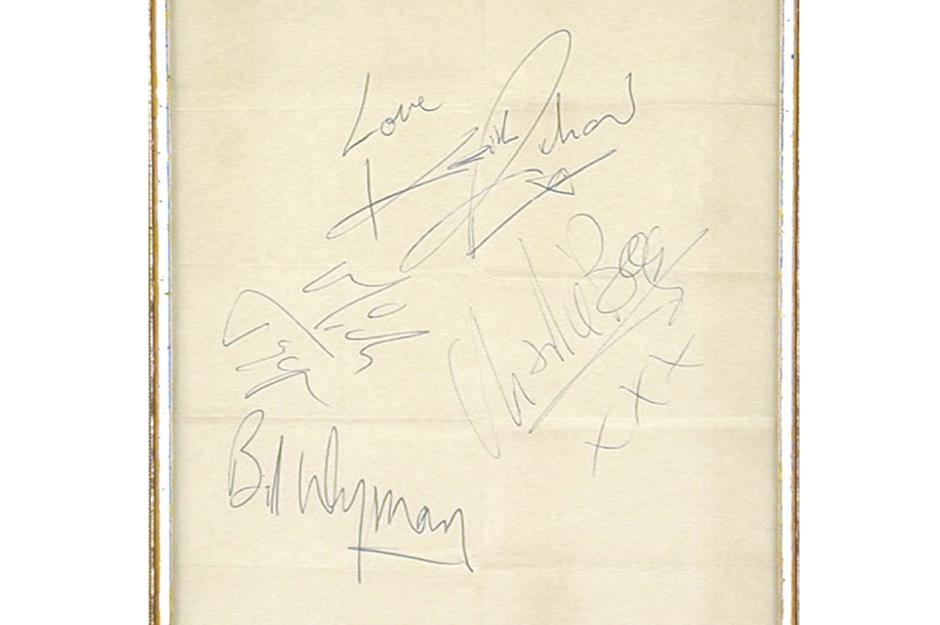 Courtesy Go Autographs
Bogus Rolling Stones autographs are all too common and, according to former bassist Bill Wyman, the band even used to forge each others' signatures when signing piles of records or photos for fans. To avoid fakes, do your homework, familiarise yourself with the band members' signatures and only buy from reputable dealers. 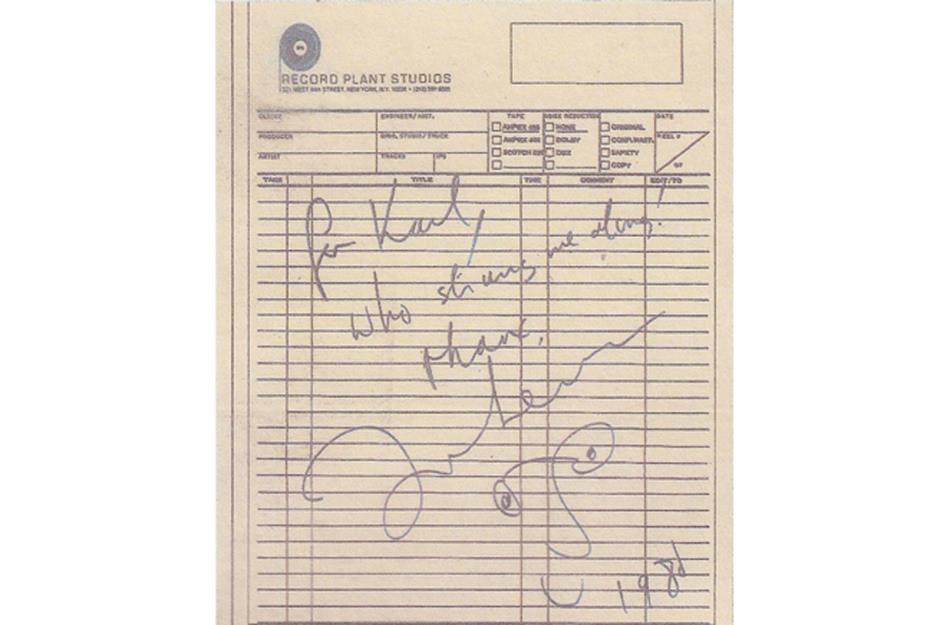 Paul Fraser Collectibles
Out of the original members of the Beatles, John Lennon's autograph is the most coveted, for obvious reasons. It's also a savvy investment – the average value of an album page signed by the Imagine singer has increased by 6% since 2016. 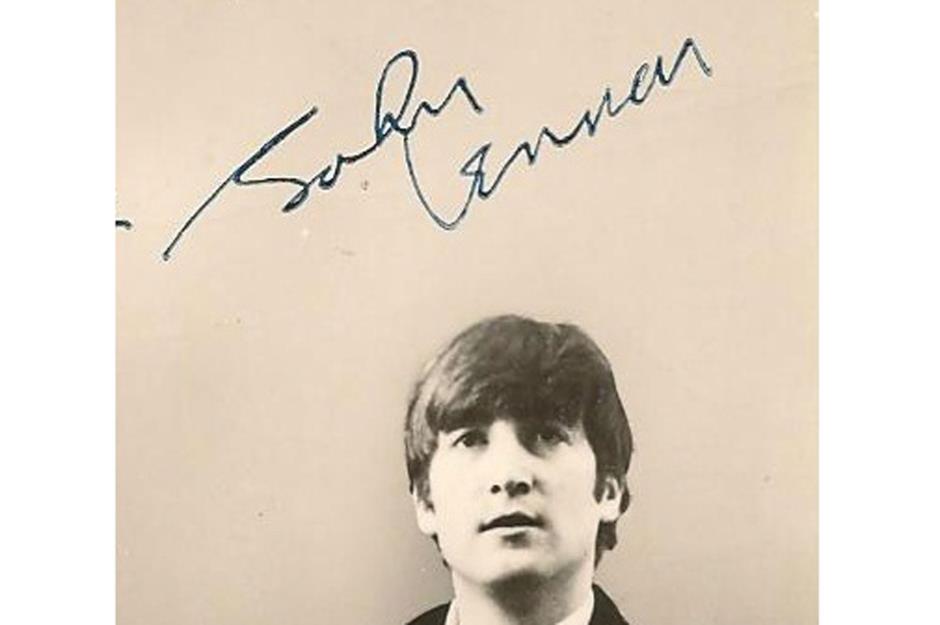 Courtesy Autograph Magazine
Unscrupulous dealers have no qualms selling fake John Lennon autographs to unsuspecting collectors, so it pays to swot up on the real deal. This fake would be obvious to a collector. The handwriting style is too angular for John Lennon – his script was more 'curvy' and the flow is all wrong. 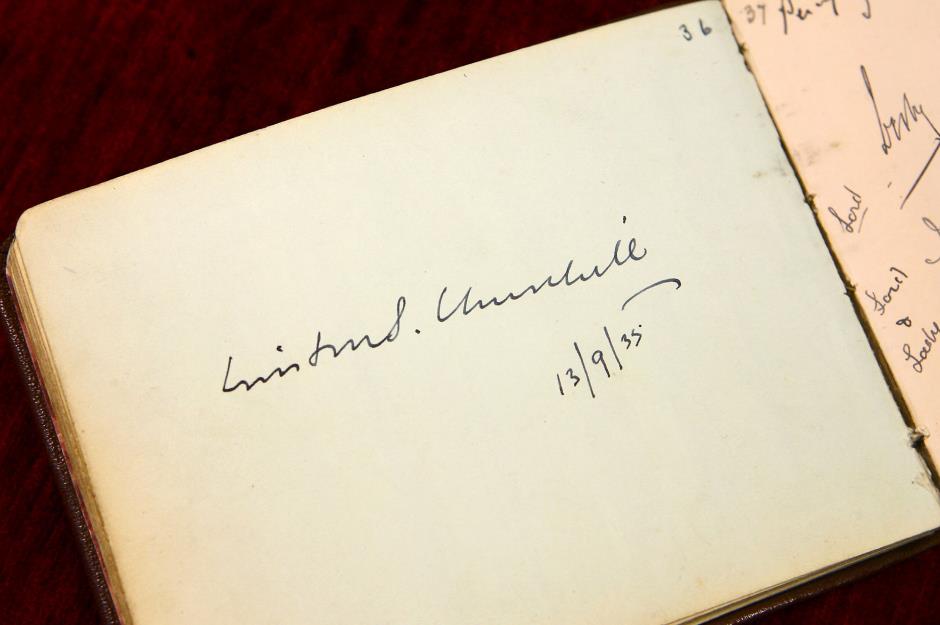 Gareth Fuller / PA
The wartime British prime minister was a prolific writer and note-taker, and many examples of his highly desirable signature exist, from signed government documents to personal correspondence and informal notes. 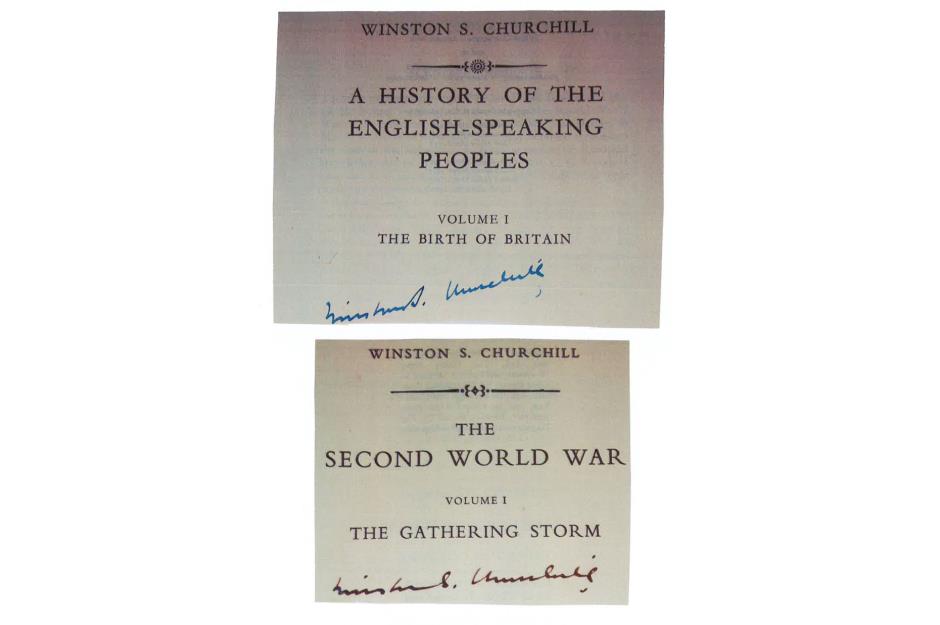 Metropolitan Police / PA
Look for handwritten letters or inscriptions rather than lone signatures as these are more tricky to fake. Again, only do business with reputable dealers. This signature was faked by a forger in Southampton, England, who was sentenced to 10 months' imprisonment back in 2012 for the crime. 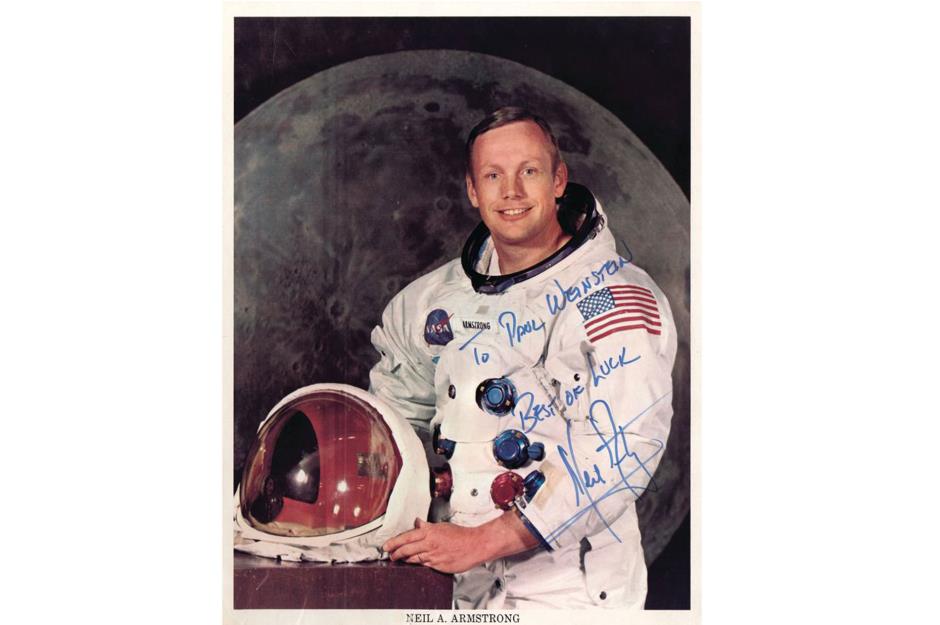 Courtesy Fraser's Autographs
The first person to walk on the Moon reportedly signed thousands of photos, letters and cards during his lifetime and while Neil Armstrong autographs aren't the rarest, collectors will pay top dollar for the best examples. 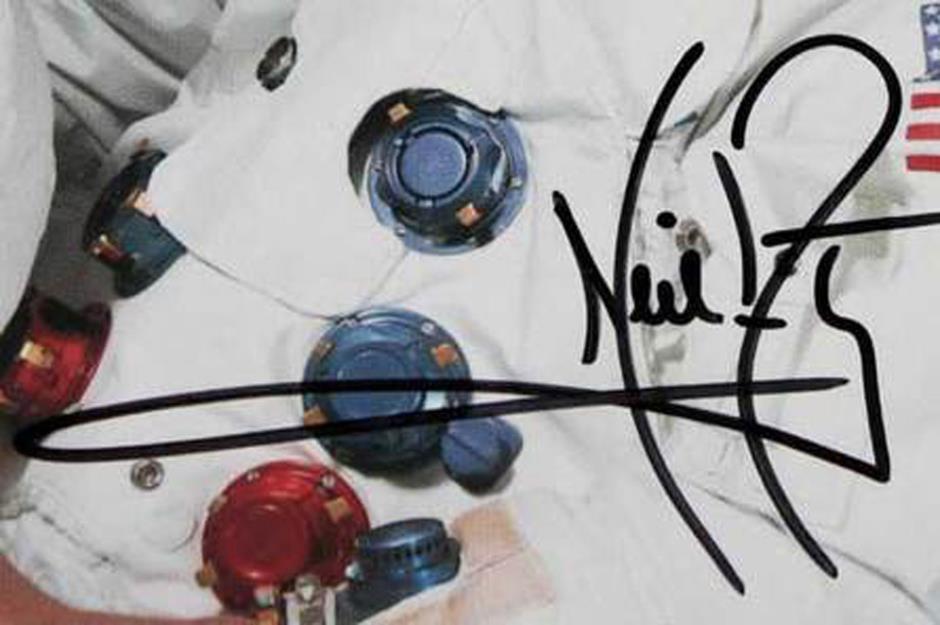 Courtesy Zarelli
Neil Armstrong autographs are considered high risk and the internet is littered with fakes. This is a prime example. Experts and amateurs with a keen eye will notice it lacks flow and 'speed', and the pressure is too uniform. All tell-tale signs of a forgery. 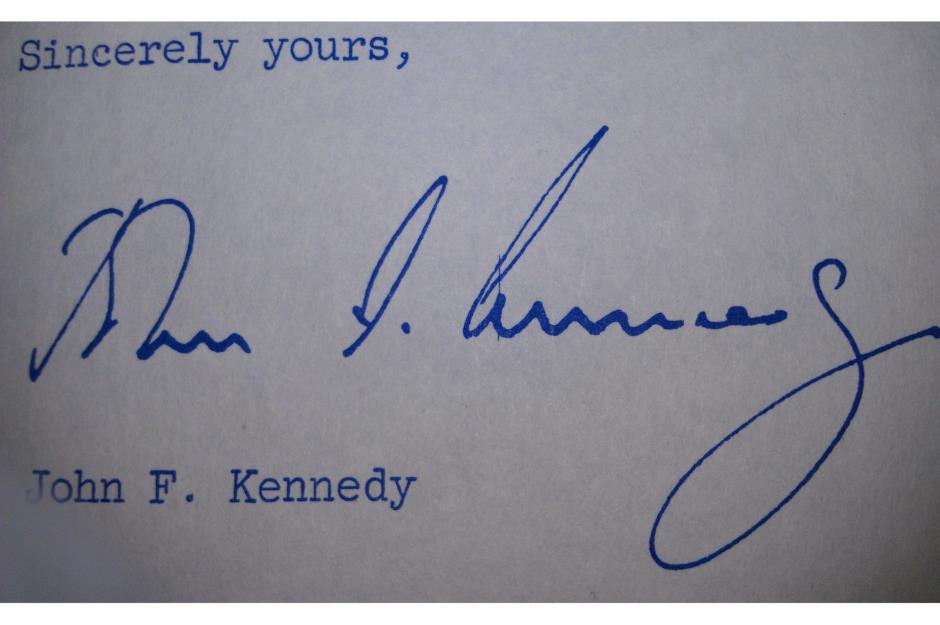 Courtesy Autograph Magazine
JFK's signature is extremely collectable and, while there are many examples in existence, the vast majority of them are either autopenned or printed. The rarer autographs that are signed by hand attract the highest prices. 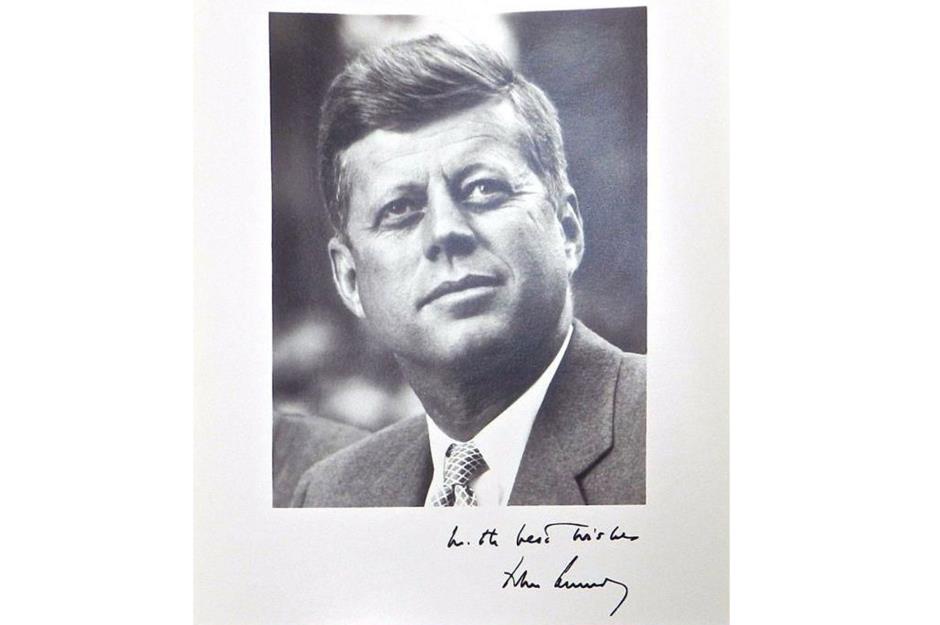 Courtesy Autograph Magazine
In addition to looking out for fakes, you'd want to make sure you're not unknowingly snapping up an autopenned or printed JFK autograph (pictured). Although they are valuable, the real deal handwritten signatures are worth a lot more. 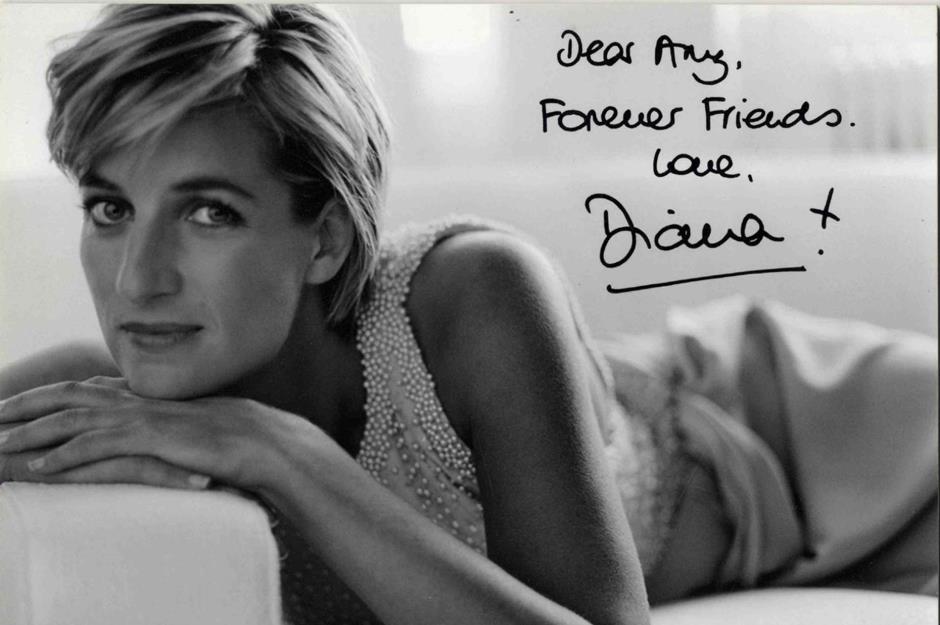 Courtesy Princess Diana Autographs
Dubbed 'the pinnacle of royal collectibles', Princess Diana memorabilia has surged in value since 2000, enjoying a compound annual growth rate of 12.7%. The average autographed item commands a price tag now of around $12,308 (£9,500). 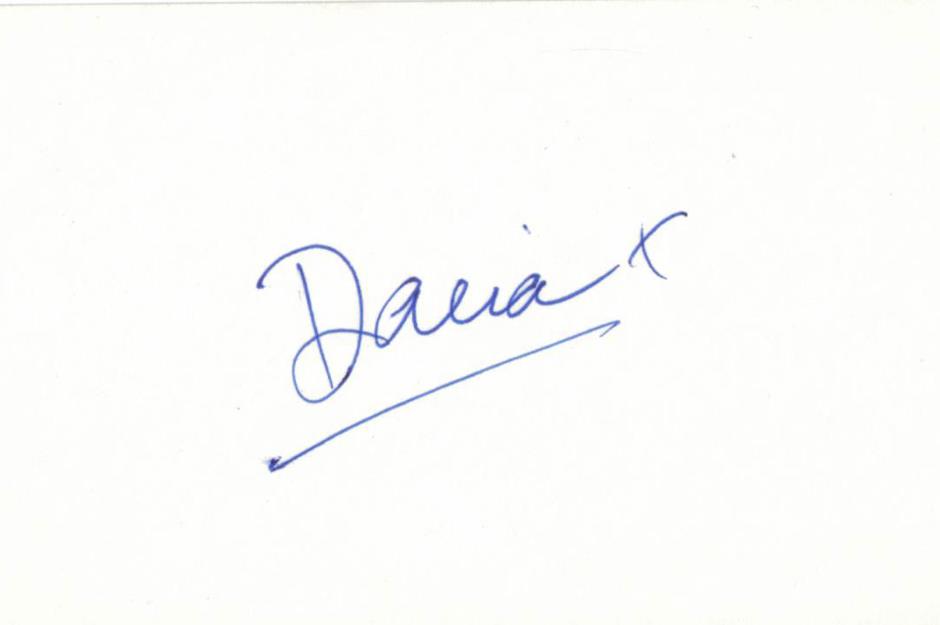 Courtesy Princess Diana Autographs
Princess Diana had the sort of handwriting graphologists describe as 'curvy' – a sign of a warm and affectionate nature apparently. A blatant forgery, this iffy-looking autograph is too narrow and angular to be attributed to the late princess. 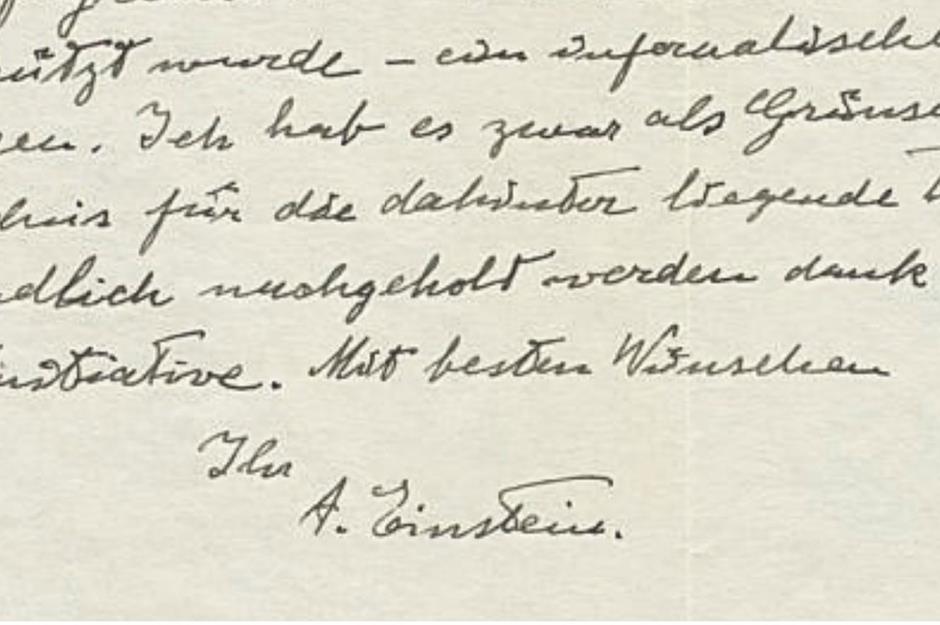 Christie's
Authentic documents or photos that have been signed by the most important scientist of the 20th century are perennially in demand. This letter was sold at Christie's London in 2009 for $7,288 (£5,625), a snip at the price. 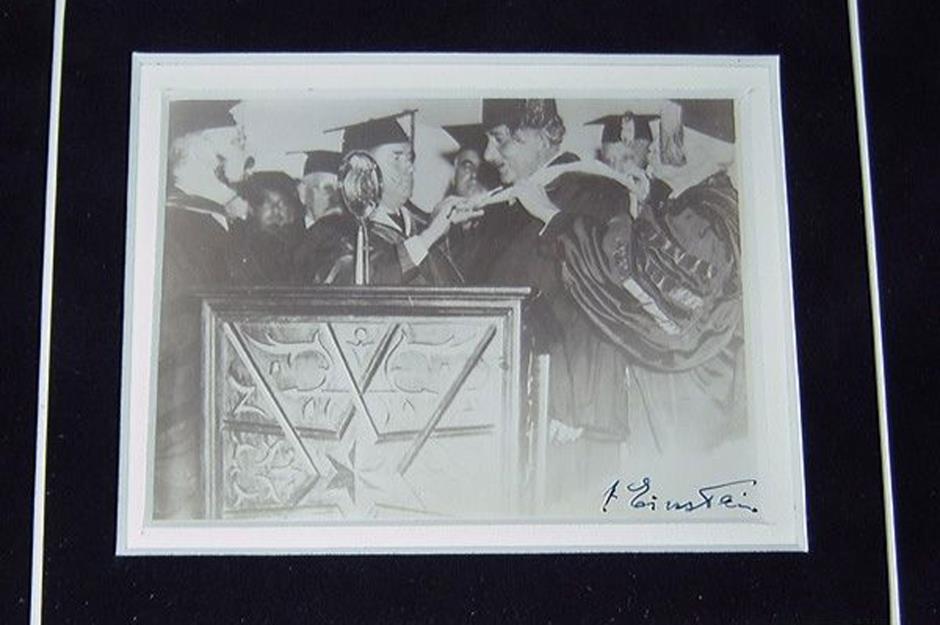 Courtesy Autograph Magazine
Einstein signature expert Gregory J. Mallon advises potential collectors to pay close attention to: the 'heaviness' of the script – Einstein had a light hand; the difficult capital 'E' – does it flow well; and the break between the 'i' and 'n' – authentic autographs tend to have a small space between these letters. 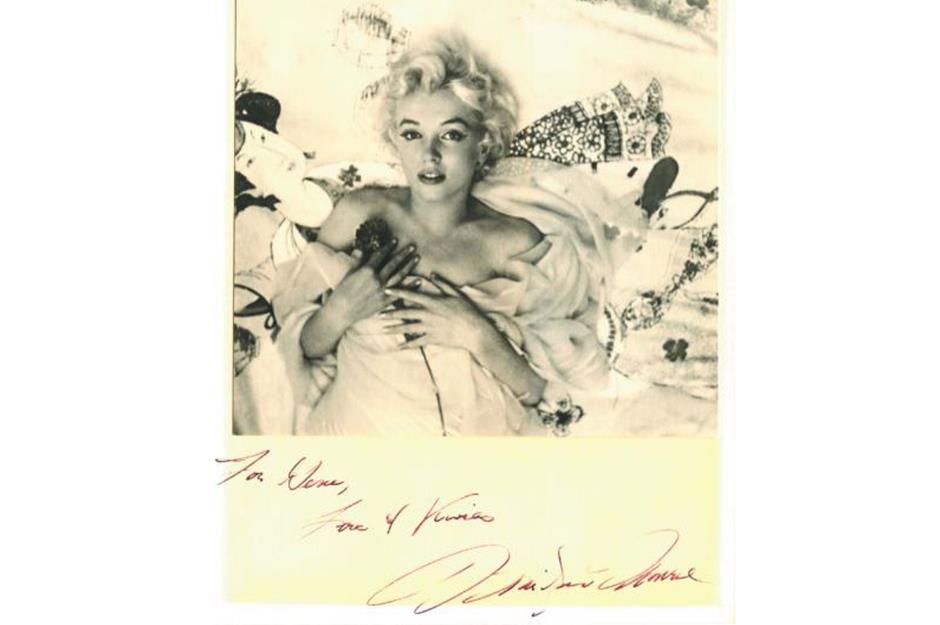 Courtesy Vintage Seekers
Another icon who departed far too soon, Marilyn Monroe left behind a wealth of collectibles, including many signed items. This 1956 signed photo of the blonde bombshell by society photographer Cecil Beaton sold for $25,263 (£19,500) in 2012. 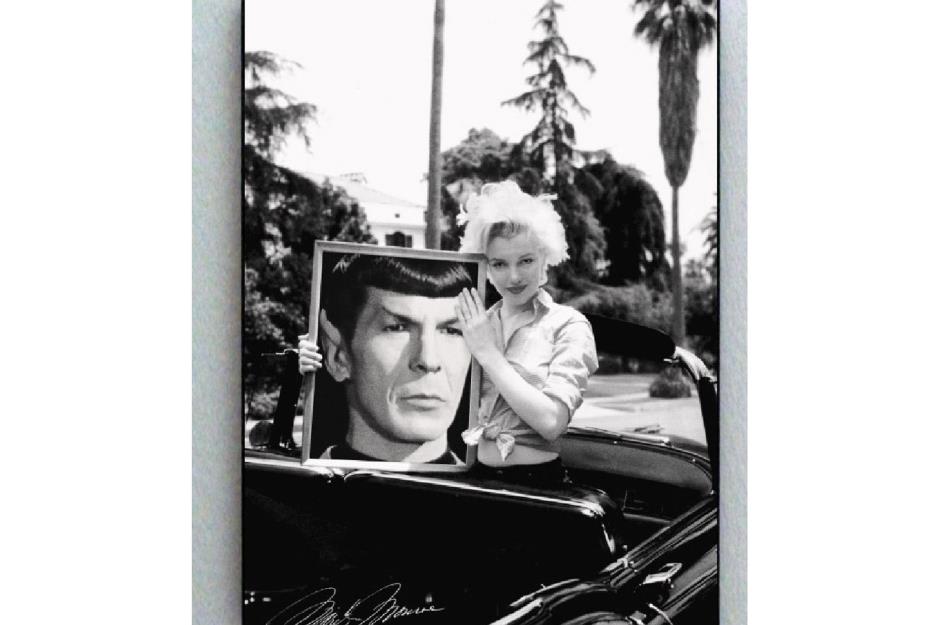 Courtesy eBay
Experts estimate that only 24% of Marilyn Monroe autographs are genuine. There are so many fakes around, even the experts have trouble sometimes distinguishing the real autographs from the fakes. Unless you're super-knowledgeable, only source your autographs from well-regarded dealers. 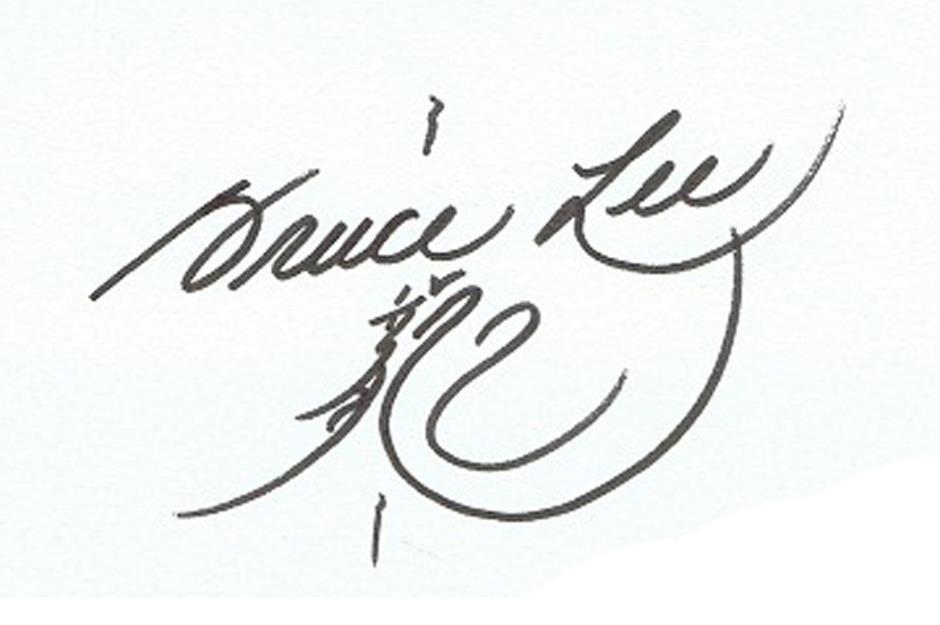 Courtesy Autograph Magazine
The martial arts legend is a collectors' favourite and Bruce Lee memorabilia is big business. Autographs penned by the Way of the Dragon star attract high prices and make for a money-spinning investment. Sale prices have increased by 12% since 2000. Pictured is a good example of a Bruce Lee autograph. 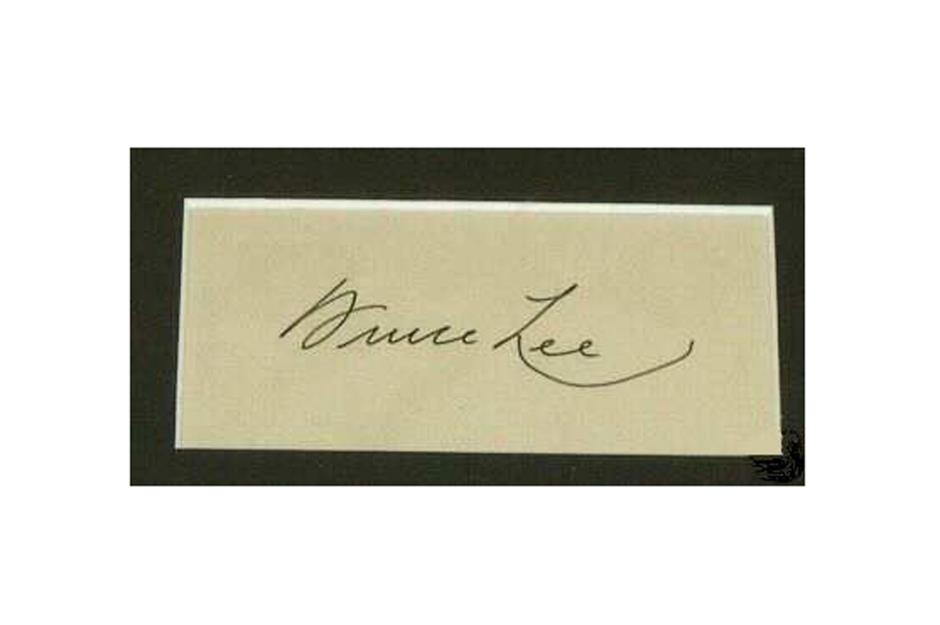 Courtesy Bruce Lee Autographs
Fake Bruce Lee autographs are ten-a-penny. As with most forgeries, they tend to be a lot more affordable than the genuine article – if something seems too good to be true, it probably is. Another thing to watch out for is signed Way of the Dragon posters. Lee never signed any of these, so if you ever come across one you'll know it's 100% fake. 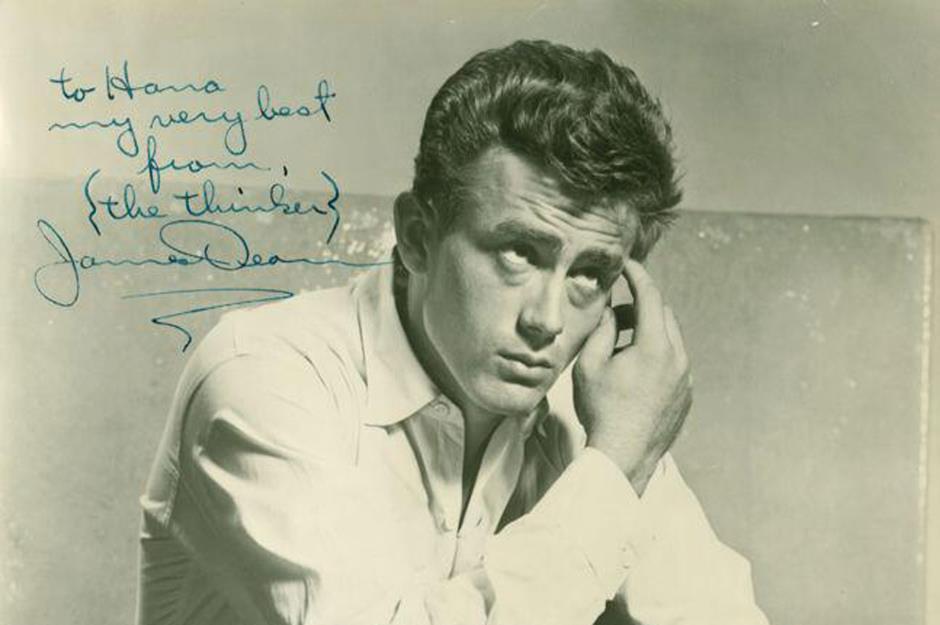 Paul Fraser Collectibles
James Dean's brooding good looks, method acting chops and untimely death at 24 have made him one of the foremost cultural icons of the 20th century. Needless to say, authentic examples of the 50s heartthrob's autograph, such as this inscribed photo, are worth a small fortune – in fact James Dean's is the most valuable individual autograph in the world. 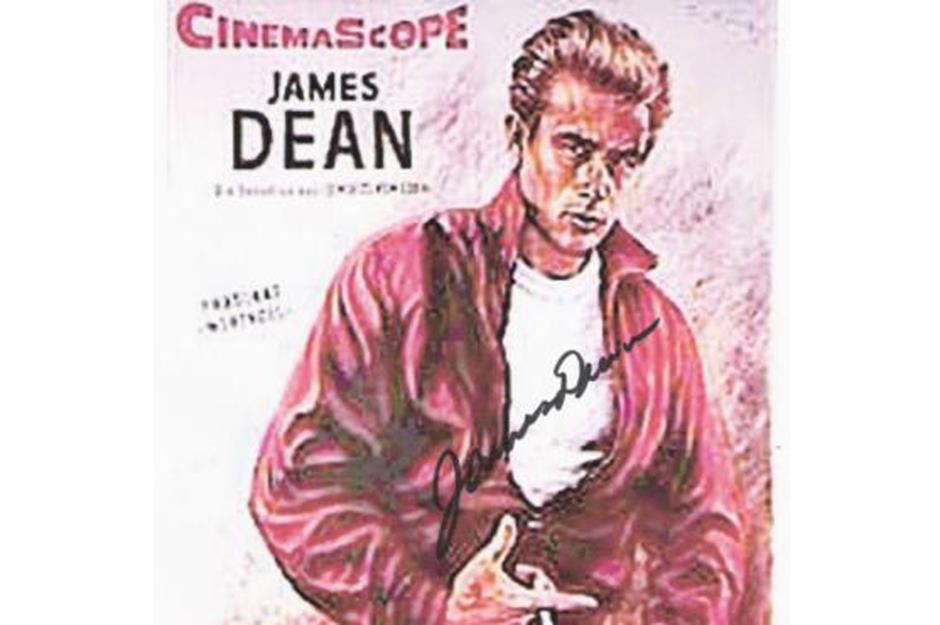 Courtesy Autograph Magazine
Spotting a fake can be challenging but it's worth noting that James Dean's signature pretty much stayed the same throughout his short adult life, so use the authenticated autographs as a visual guide. This signed poster features a rather blatant forgery – the slant is off and the 'J' and 'D' are too small in relation to the other letters. 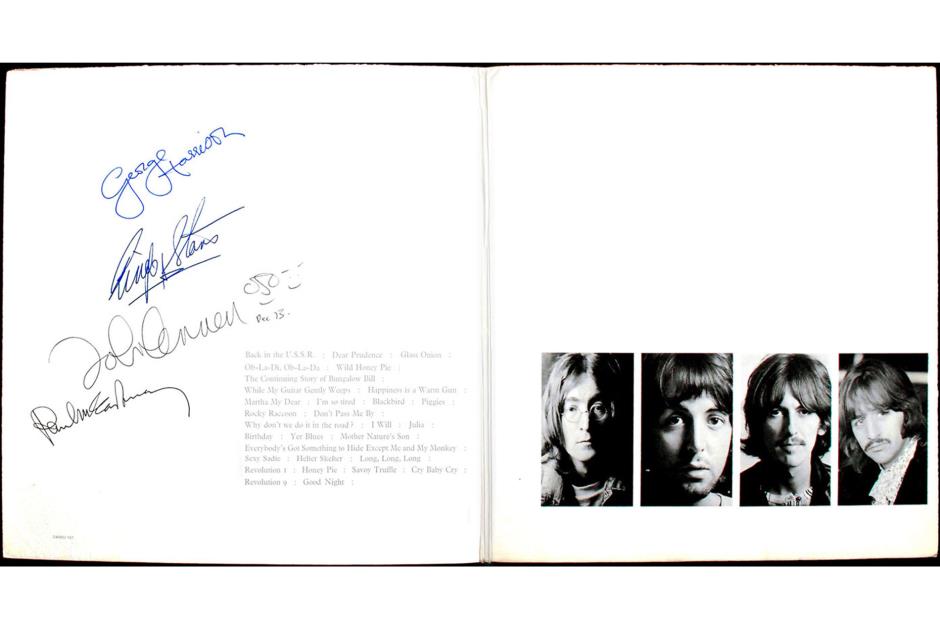 Do you own an old album or two? Read Valuable UK vinyl records you might have at home 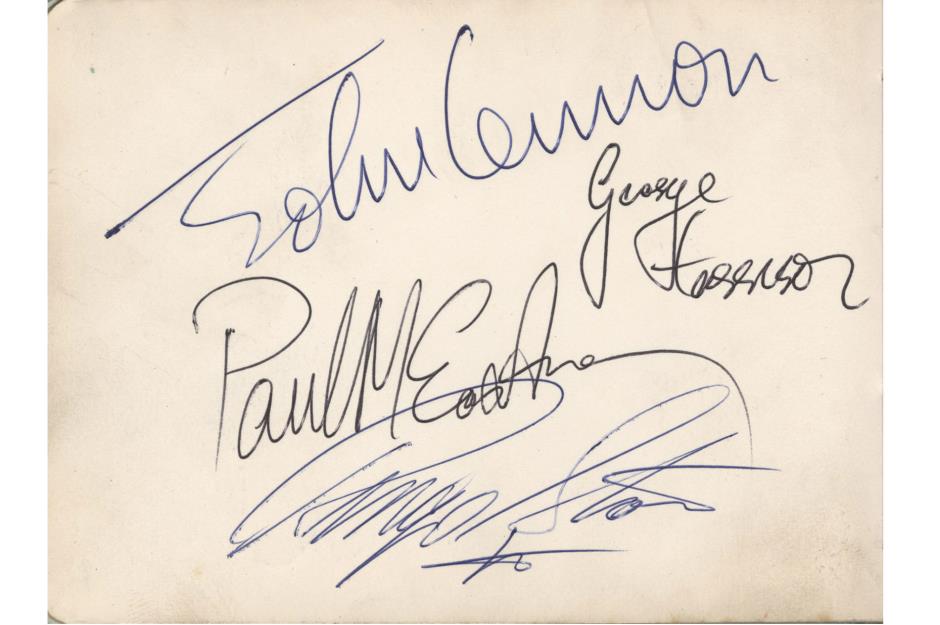 Experts predict only 6% of Beatles autographs on the open market are authentic. If you're interested in snapping up a genuine example of the Fab Four's signatures, study the authenticated versions and only buy from a reputable dealer. You also want to be extra-cautious with signed album pages post Sgt. Pepper's Lonely Hearts Club Band as these tend to be the most faked.

It's not just autographs that can be bogus, read: Fortune or fake: masterpieces on trial