The Big Bang Theory cast: who’s earned the most money?

Big bucks in The Big Bang Theory and beyond 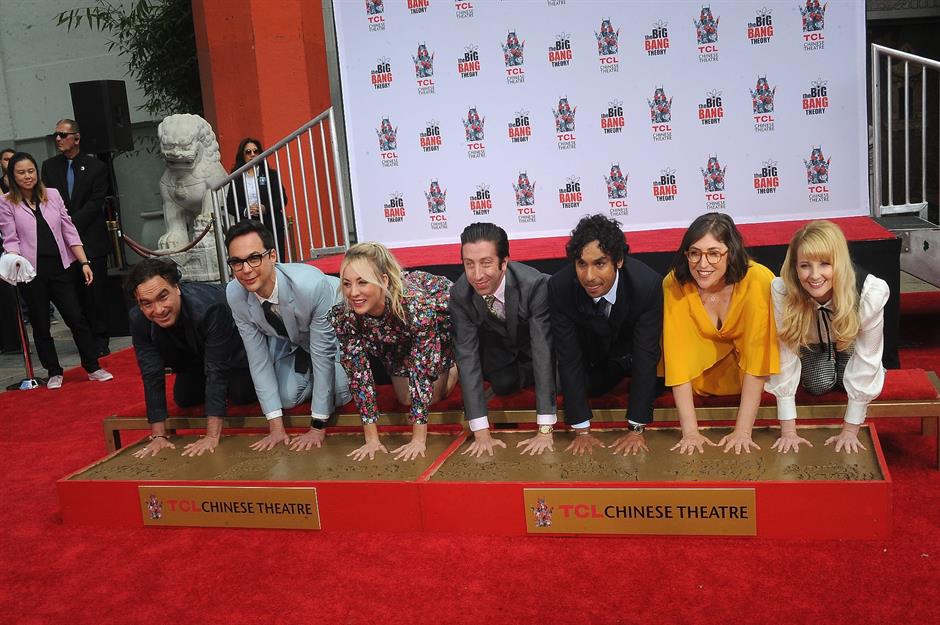 The Big Bang Theory (TBBT) was a US sitcom classic that spanned 12 seasons between 2007 and 2019. Thanks to the show’s enormous success, the lead actors’ combined salaries topped $130 million (£104.9m) by the time the show drew to a close, making them rich as well as famous. Since the show ended, its stars have gone on to a host of other lucrative projects, from starring in spin-off series to hosting game show Jeopardy!

But which of them has come out on top financially? Click or scroll through to discover which star of The Big Bang Theory took home the biggest paycheque and has made the most money since.

All dollar amounts in US dollars unless otherwise stated. 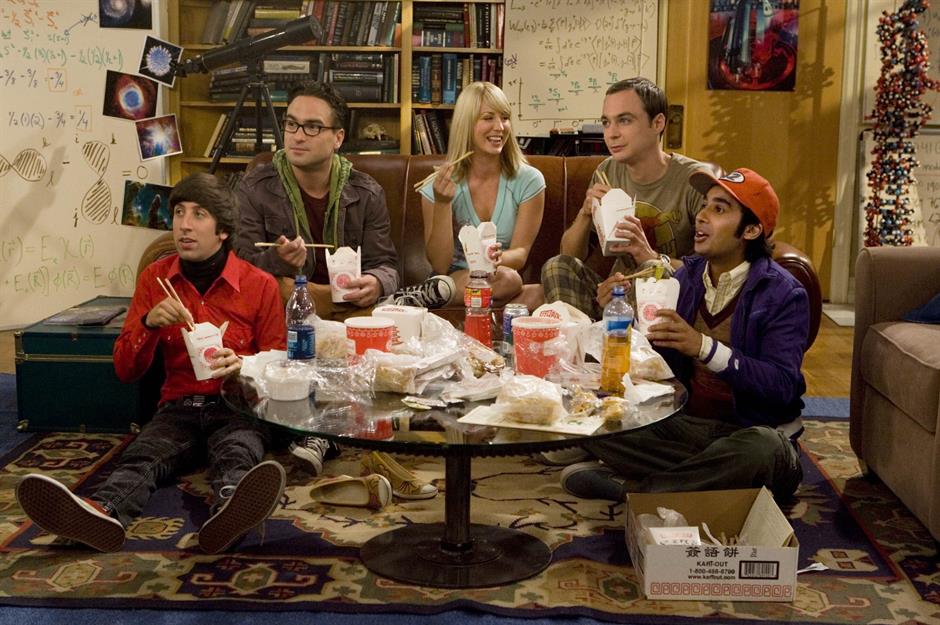 The Big Bang Theory didn’t start out as a massive success – in fact, the first pilot episode, which featured only Jim Parsons (Sheldon Cooper) and Johnny Galecki (Leonard Hofstadter) from the final cast, never even aired on TV. Writers Chuck Lorre and Bill Prady reworked the concept, freshened up the cast, and The Big Bang Theory, as we know it today, burst onto screens on CBS in America in 2007.

The show's 2019 finale drew in almost 18 million viewers, which is a serious increase compared to the 8.31 million who regularly tuned in during season one. 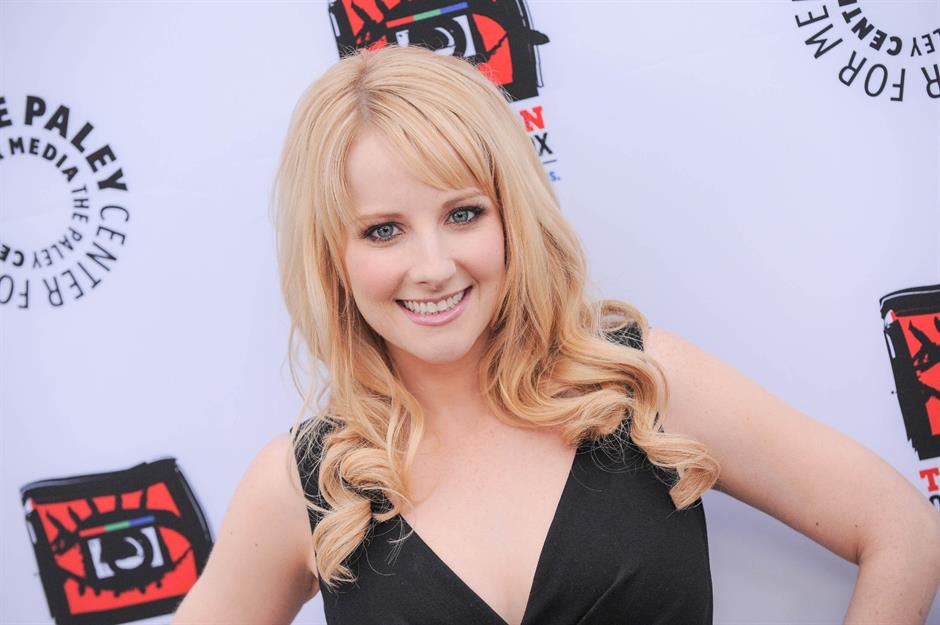 Melissa Rauch was the second female to join the core cast, taking on the role of Penny’s Cheesecake Factory colleague and microbiologist Bernadette, who went on to become Howard’s love interest.

Before The Big Bang Theory, the 4’11” actor had a couple of minor TV roles and a blink-and-you’ll-miss-it part in the rom-com I Love You, Man, but it was the science-based sitcom that really pushed Rauch into the limelight. 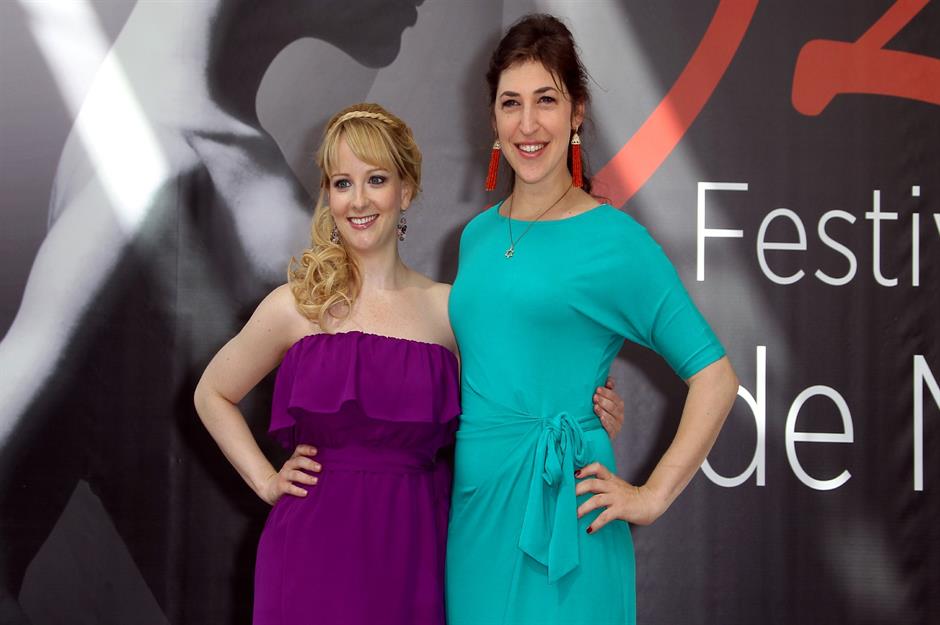 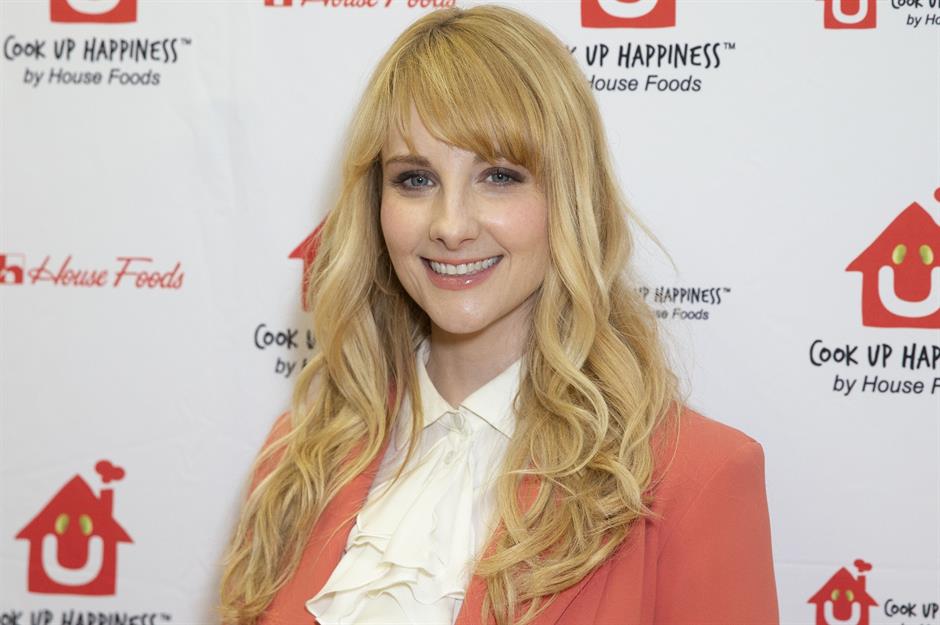 During TBBT, Rauch co-wrote the 2015 film The Bronze and voiced characters in Ice Age: Collision Course and Batman and Harley Quinn. Just as the show was wrapping up, she also released a free children’s book called The Tales of Tofu in an attempt to make healthy eating fun and accessible.

As for what's next for Rauch, she's set to star in upcoming sitcom Night Court, which is a sequel to the original 80s series. Rauch is also serving as an executive producer on the show.

With a plethora of TV and movie credits to her name, it’s not surprising that Melissa Rauch has amassed a reported fortune of around $20 million (£16.1m). 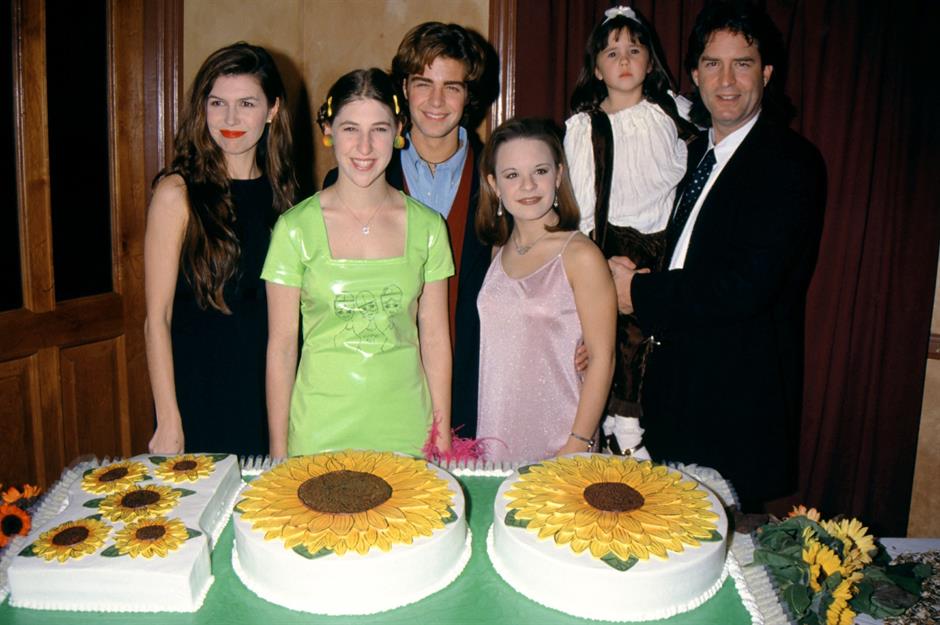 Mayim Bialik (pictured second from left) made her first Big Bang Theory appearance as Sheldon’s love interest, Amy Farrah Fowler, in the finale of season three in 2010. Before making her debut on the show, Bialik was already an established actor, having played the main character in NBC’s Blossom for four years in the early 1990s.

Being part of that show didn’t come with the same riches as TBBT though, and Bialik explained when she appeared on Jaleel White’s Ever Actor podcast that she "did not have the kind of financial success that would’ve set [her] up for the rest of [her] life". Luckily, playing the role of Amy Farrah Fowler was considerably more lucrative… 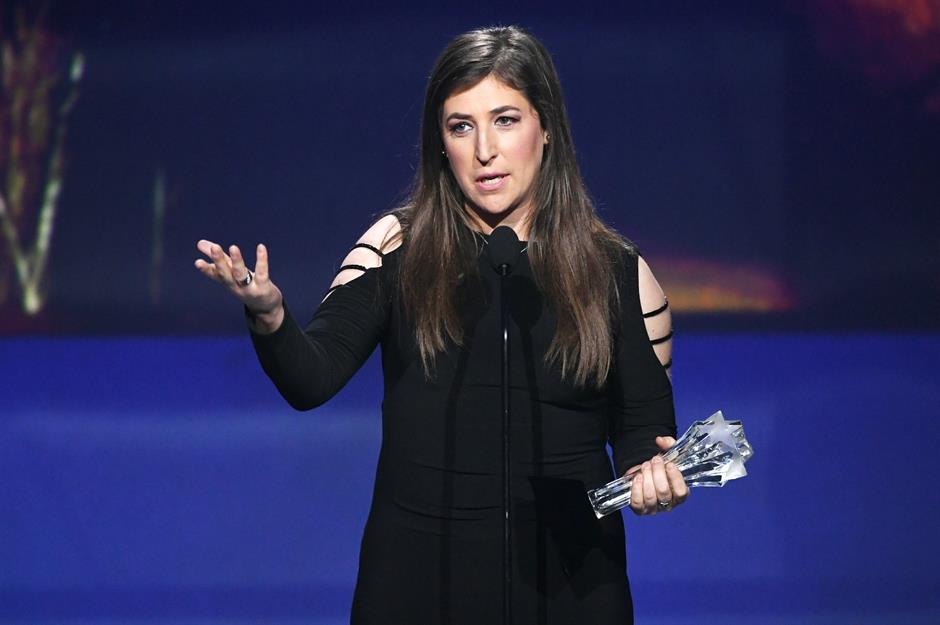 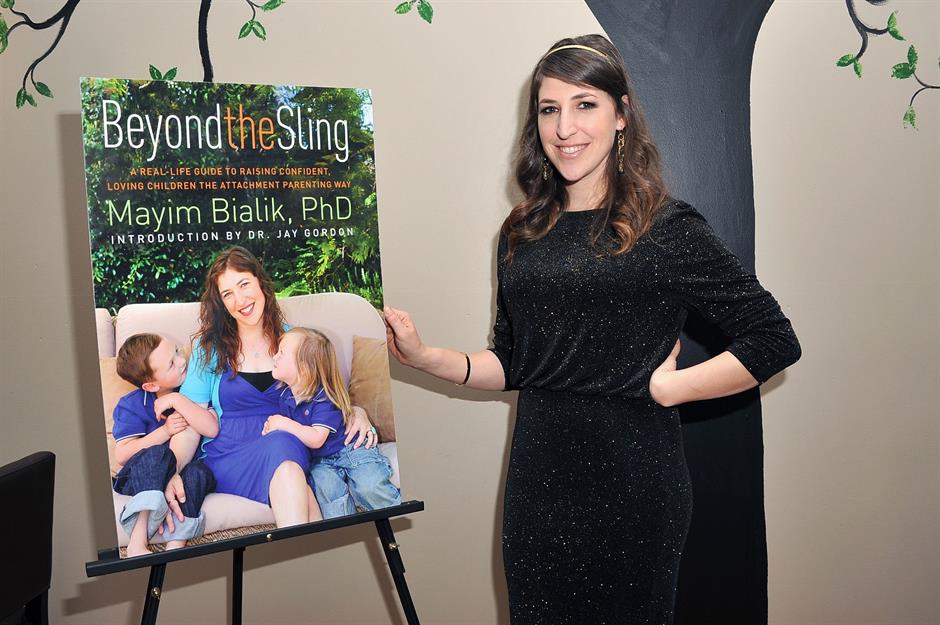 Bialik has more in common with her character than many would expect, as she also has a PhD in neuroscience and has been known to tweak the show’s often technical script if writers didn't nail the science. The long-time vegan also became the co-owner of plant-based restaurant Bodhi Bowl in Los Angeles when it opened in 2017 and has even penned her own vegan recipe book in collaboration with the restaurant’s chef, Ali Cruddas.

In addition to her cookbook, Bialik has written a parenting guide, two children’s books about growing up, and a collection of facts about superhero The Flash, who is adored by her on-screen partner, Sheldon.

Currently, Bialik is hosting the iconic game show Jeopardy! having landed the full-time gig after a successful stint as a guest host. It's thought that all of Bialik’s projects combined have garnered her a substantial fortune of $25 million (£20.2m). 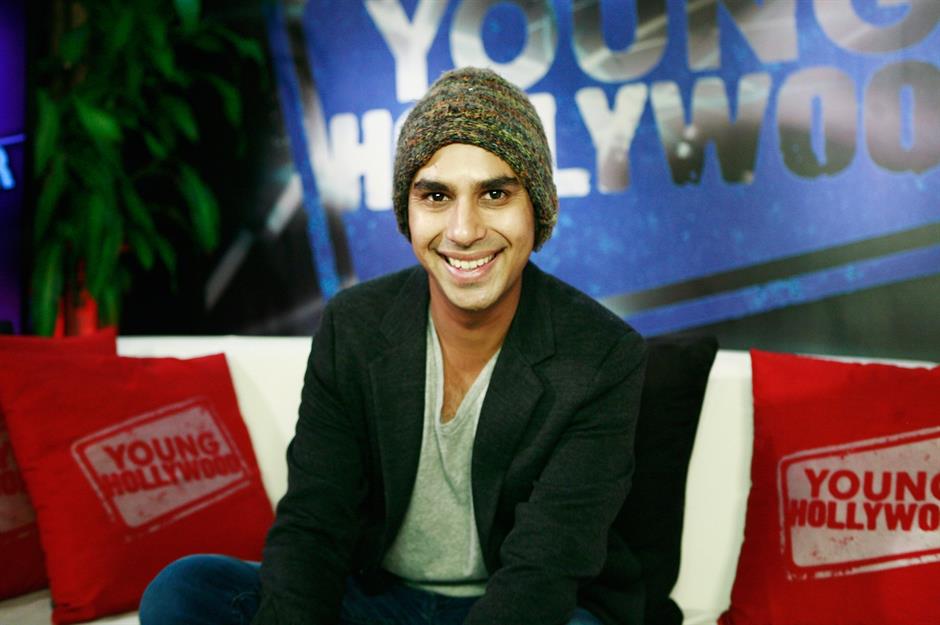 Kunal Nayyar first hit the big screen as a pizza delivery driver in rom-com movie S.C.I.E.N.C.E in 2004, after taking drama classes alongside his business degree and then completing a Master’s qualification in acting. 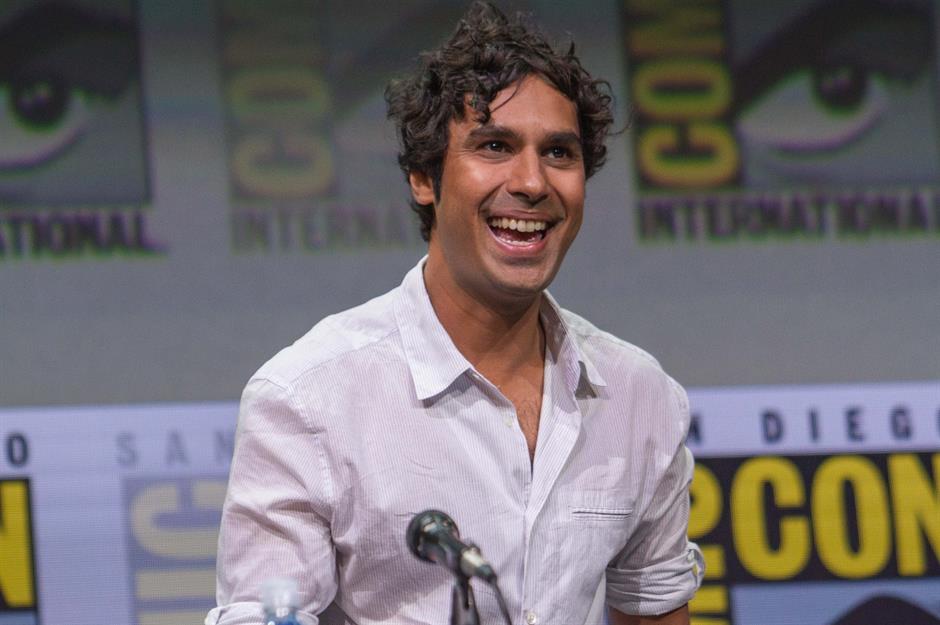 Ahead of season nine the five core actors in the show reportedly came together to negotiate equal salaries, with each eventually taking home $1 million (£807k) per episode. Their salaries were then renegotiated to $900,000 (£726.4k) to free up money to increase the salaries of their more recent co-stars. 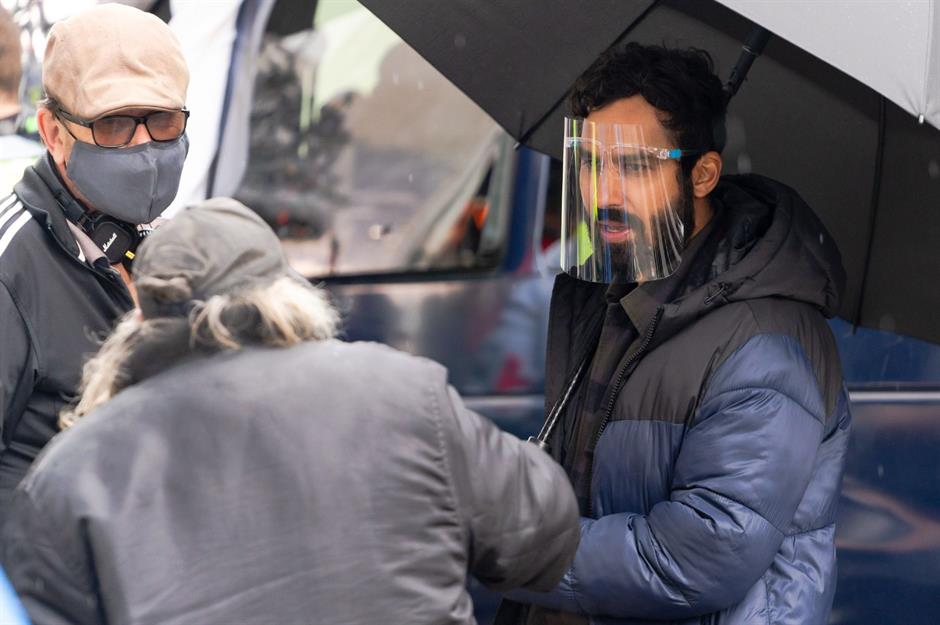 After The Big Bang Theory, Kunal Nayyar featured in the record-breaking movie Trolls: World Tour, having first voiced the character Guy Diamond in Trolls in 2016. Recently, Nayarr has dabbled in more dramatic TV series, including Criminal: UK, Mira, Royal Detective, and Apple TV+ thriller Suspicion (which he is pictured filming).

As for what's next for Nayyar, he's set to star in the upcoming science fiction movie Spaceman alongside Adam Sandler.

Having been catapulted to fame by the success of The Big Bang Theory, it’s estimated that Kunal Nayyar is now worth around $45 million (£36.3m). 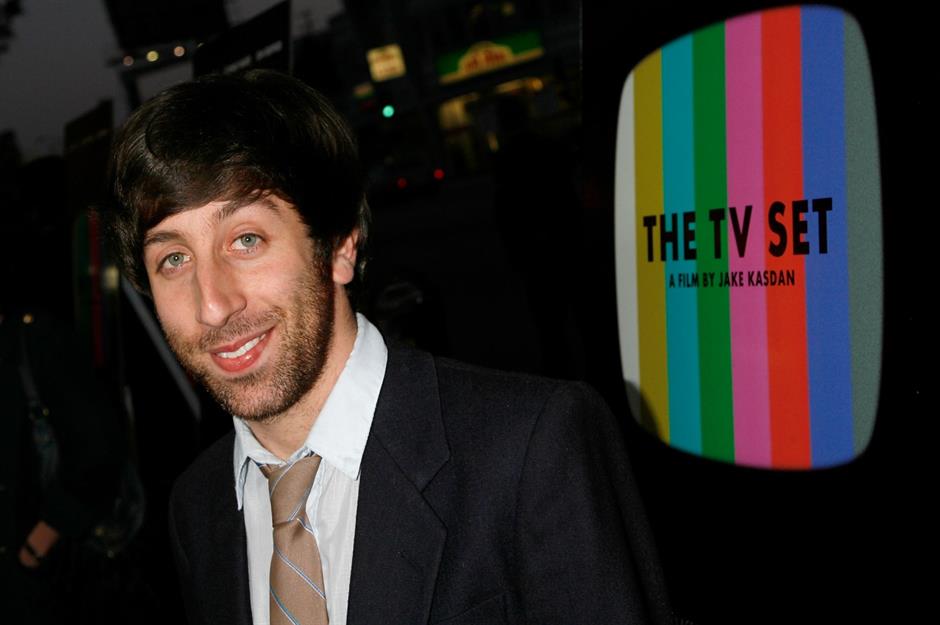 Simon Helberg had a good eight years of acting credits under his belt before he brought The Big Bang Theory’s Howard Wolowitz to life, including small parts in the Hilary Duff movie A Cinderella Story and in the 2005 George Clooney blockbuster Good Night, and Good Luck. 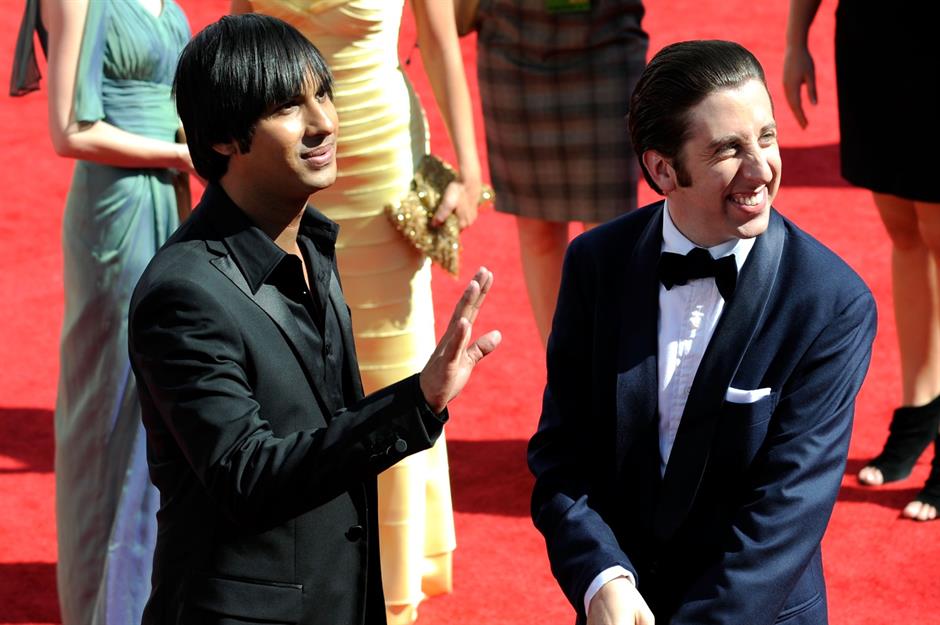 Taking up a similar supporting role in The Big Bang Theory to Kunal Nayyar, Simon Helberg’s salary saw the same incremental increase from $45,000 (£36.3k) in season one to a high point of $1 million (£807k) per episode in later seasons.

With such similar salaries, it’s unsurprising that Nayyar and Helberg shared third place in the list of the highest-paid TV actors in the world in 2018 during the show’s final season, having each secured annual paycheques of $23.5 million (£18.9m) since June of the previous year. 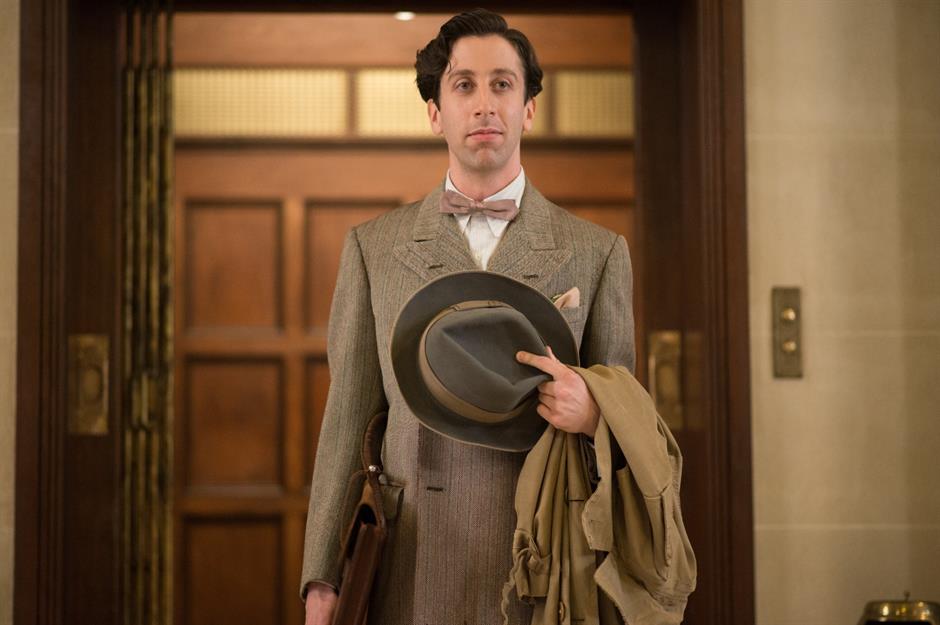 Alongside filming for The Big Bang Theory, Helberg featured in a Kung Fu Panda TV series between 2011 and 2016, and even got to play piano alongside Meryl Streep in Florence Foster Jenkins in 2016 (pictured).

More recently, Helberg played The Conductor in the musical film Annette and starred in As Sick As They Made Us, which was written and directed by former co-star Mayim Bialik. And to the delight of fans, he reprised the character of Howard Wolowitz as a voice role in the TBBT spin-off, Young Sheldon, in 2021. 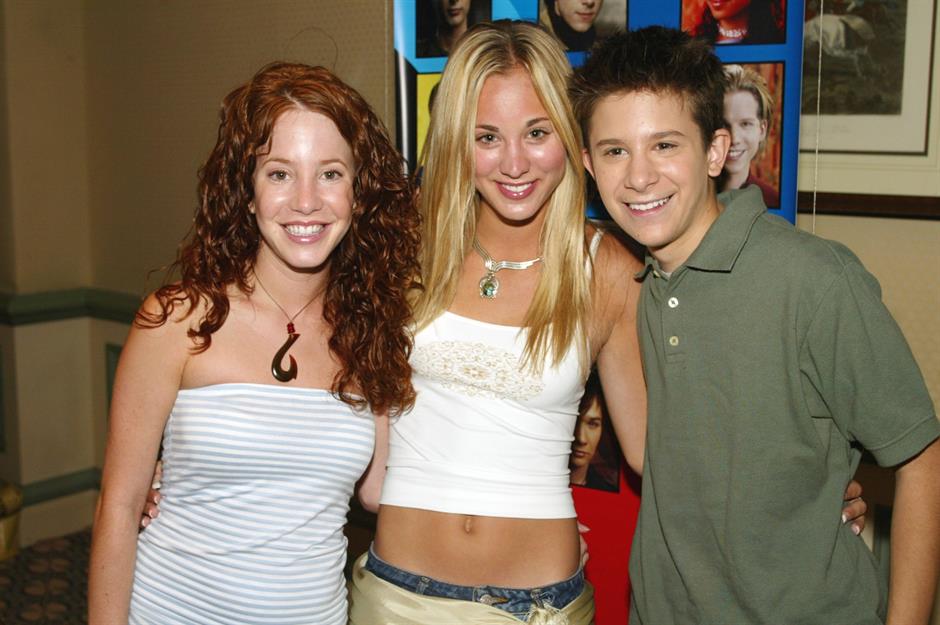 Kaley Cuoco (pictured centre) had already made her debut in the world of TV long before she starred in The Big Bang Theory, including a lead role in comedy 8 Simple Rules, which ran between 2002 and 2005. TBBT is what really shot her to fame though, and by 2017 she was the world’s second-highest paid female TV actor. 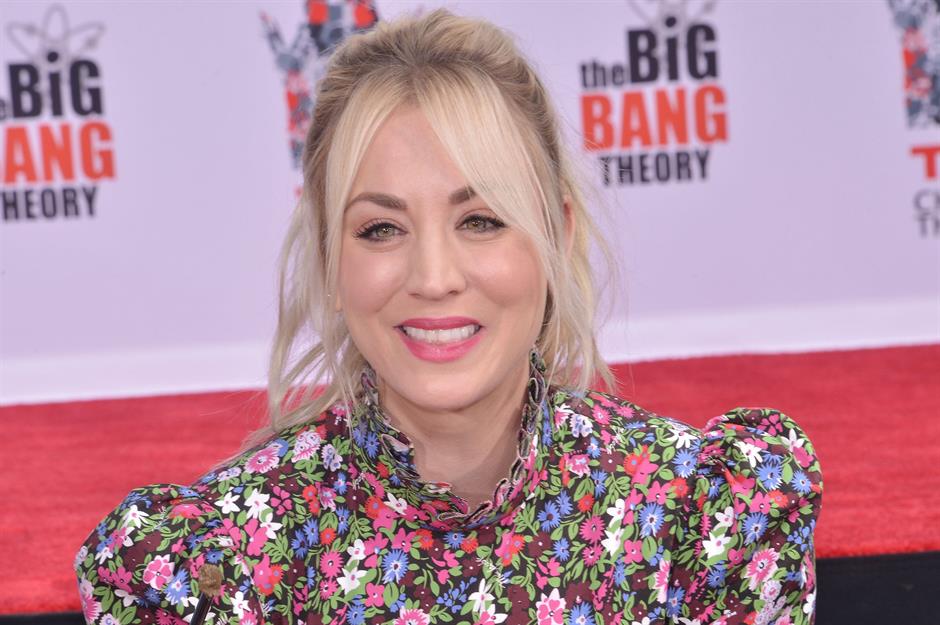 During later seasons of The Big Bang Theory, Cuoco, along with Johnny Galecki and Jim Parsons, negotiated a deal that would land each of them 1% of the show’s backend equity. One percent may not sound like much but, given Warner Bros was believed to be generating $1 billion (£805m) every year at the show’s peak, it meant the trio received an additional $10 million (£8m) in their paycheques.

As the show was part of the Screen Actors Guild, the cast also would’ve been entitled to 80% of their paycheques during the show’s first year of re-runs, and they will continue to profit while the show remains on streaming sites and is shown on TV networks across the world. 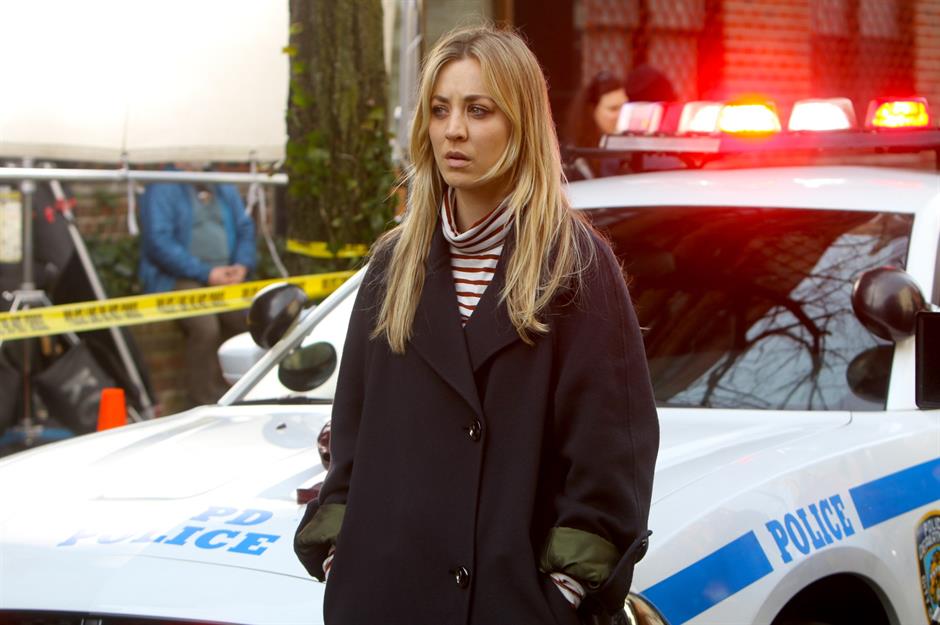 In an interview on British chat show The One Show, Cuoco revealed that she had been anxious about finding another role after the huge success of The Big Bang Theory.

She needn’t have worried, as she went on to land a leading role in HBO’s hugely popular comedy-drama The Flight Attendant (pictured), which she currently still stars in. She's also set to star in upcoming romantic comedy Meet Cute alongside SNL alum Pete Davidson.

Discover the celebrities who own franchises 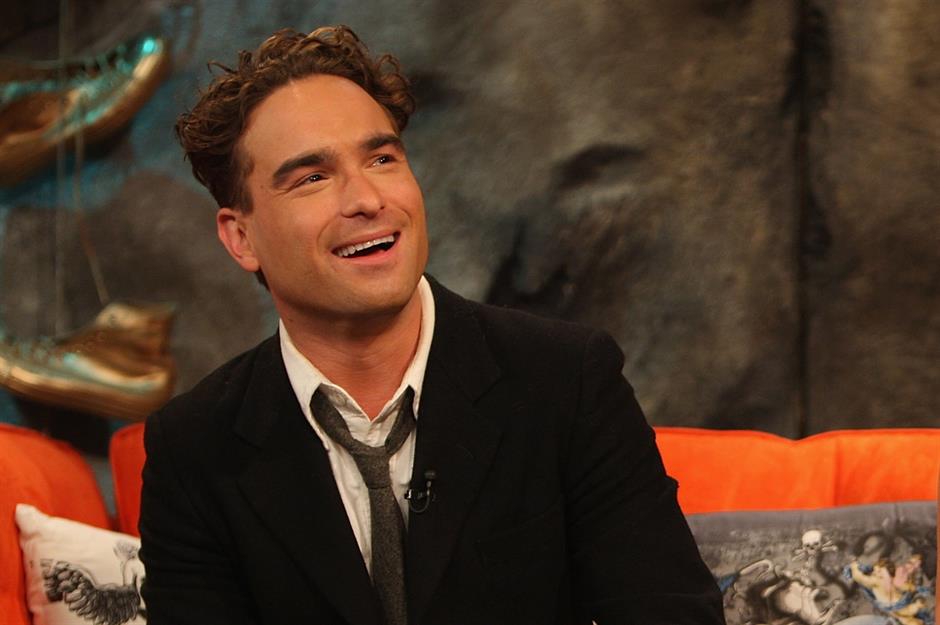 Johnny Galecki secured his first paid acting role aged just 12 when he featured in Murder Ordained in 1987. He then racked up a number of roles in big-name movies and TV shows, including National Lampoon’s Christmas Vacation, Roseanne, and Blossom, alongside future TBBT co-star Mayim Bialik.

Taking on the role of Leonard Hofstadter eventually led to Galecki being named the second highest-paid TV actor in the world, after he earned an enormous $25 million (£20m) in 2018. 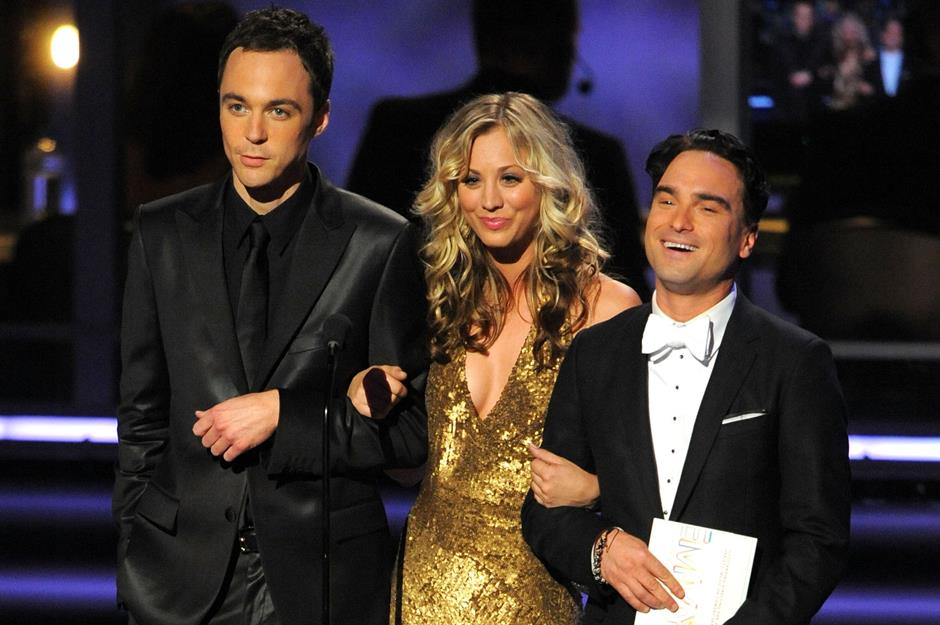 Johnny Galecki is believed to have started out on a $60,000-per-episode (£48.3k) deal when The Big Bang Theory first aired in 2007, and as the show grew in popularity, his salary skyrocketed.

Galecki earned a million dollars per episode in later seasons before agreeing to take a $100,000 (£80.7k) pay cut for the final season. 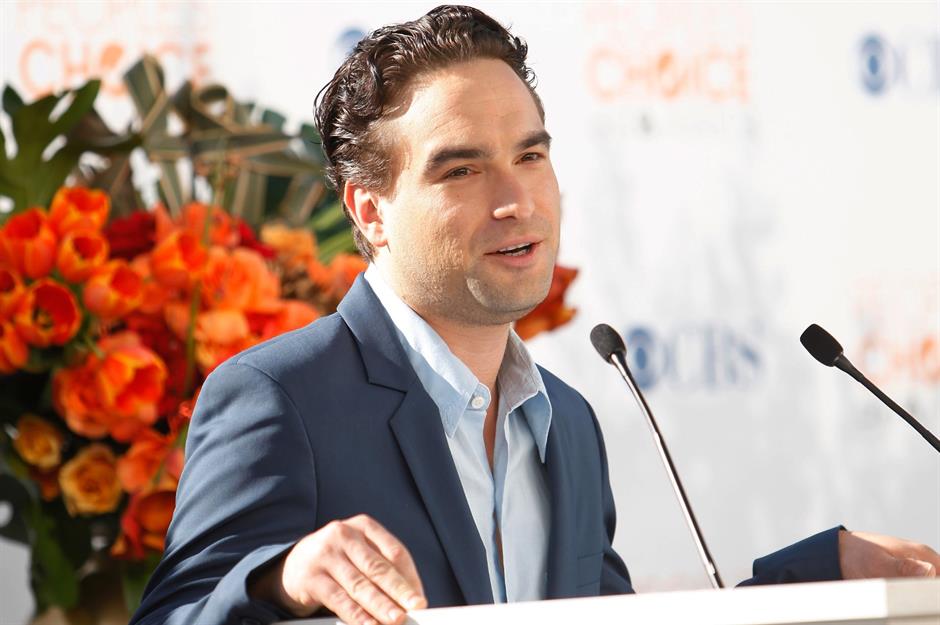 Post-Big Bang, Johnny Galecki hasn’t been in the limelight as much as his former co-stars, though he did appear in 2019 family flick A Dog's Journey.

The star can certainly afford to take a break, though, as he has built up quite the fortune since his child acting days. He's estimated to be worth around $100 million (£80.6m). 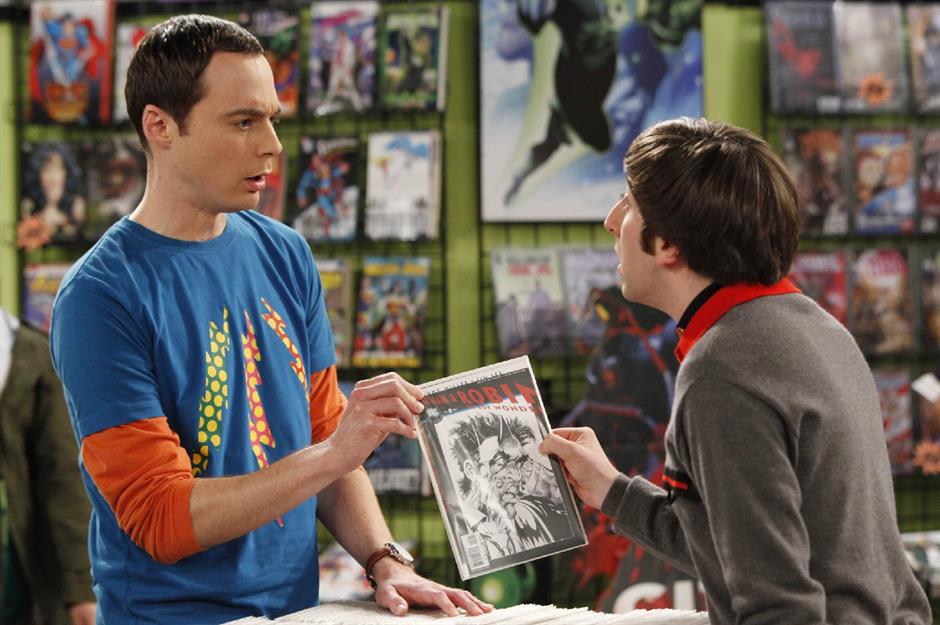 Undoubtedly the face of The Big Bang Theory, Jim Parsons, who brings the quirky Sheldon Cooper to life, was named as the world’s highest-paid TV actor in 2018 by Forbes as the show hit its final season.

Pre-tax, the actor reportedly made an impressive $26.5 million (£21.2m) that year, and it was the fourth time he had claimed the title. 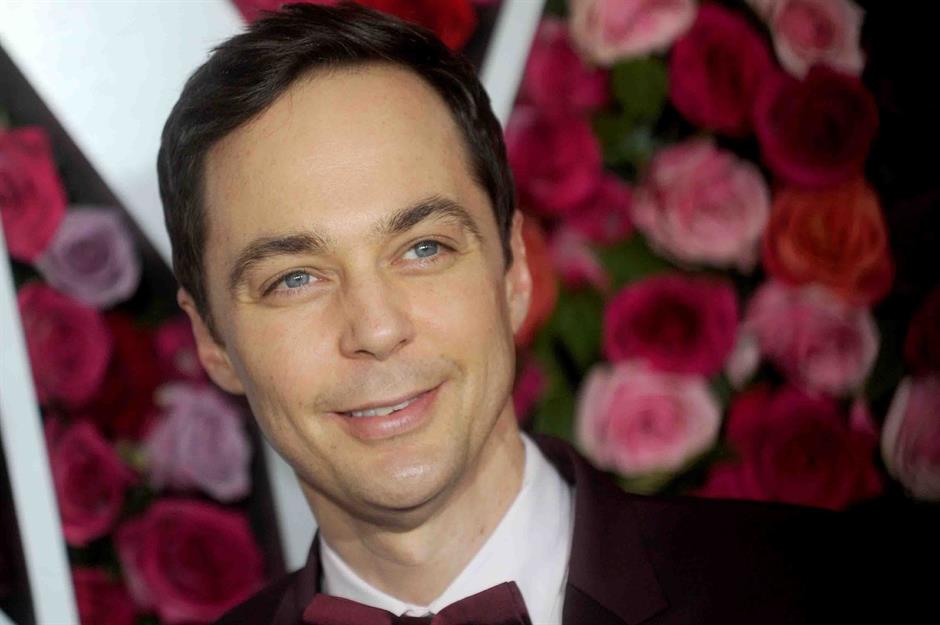 Before The Big Bang Theory really hit its stride, Jim Parsons was on the same salary as Johnny Galecki – $60,000 (£48.3k) per episode. His salary followed the same upward trajectory as Galecki's, and he accepted the same pay cut to $900,000 (£726.4k) for the final season of the show.

Parsons came out on top as the highest-earning cast member thanks to additional endorsement deals, including a seven-figure agreement with Intel. He also boasts a plethora of film and TV credits to his name, such as the starring role in the animated film Home and a cameo in The Simpsons. 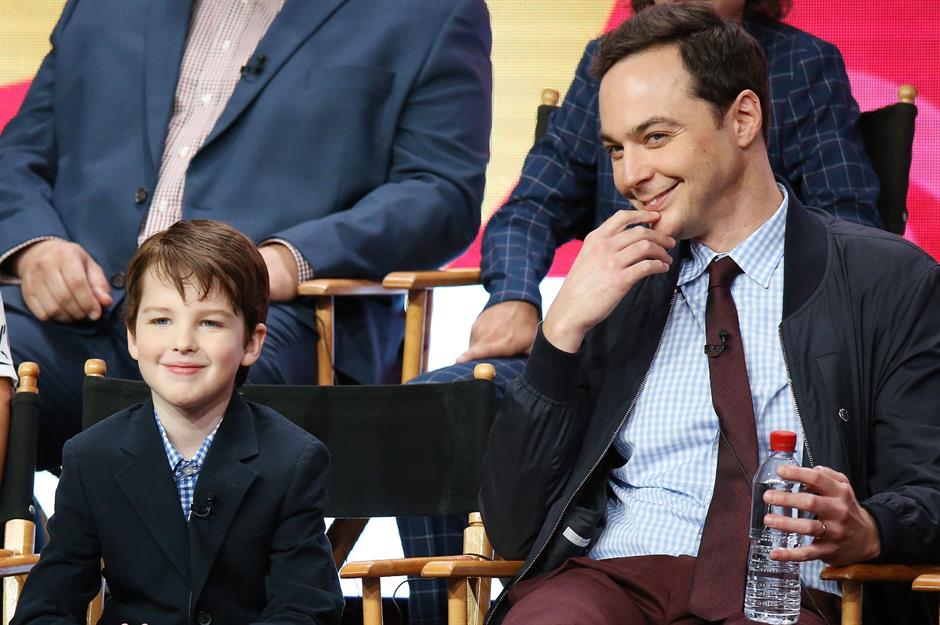 Sheldon Cooper was such a popular character that he got his own TV show in 2017 called Young Sheldon. It’s been a huge hit, and season six is set to premiere in late 2022. Although Young Sheldon features Iain Armitage (pictured) as Cooper’s childhood self, Jim Parsons narrates the show.

Outside of the spin-off show gig, Parson's is set to star in upcoming American drama flick Spoiler Alert, for which he also served as a producer.