The world’s most valuable diamonds 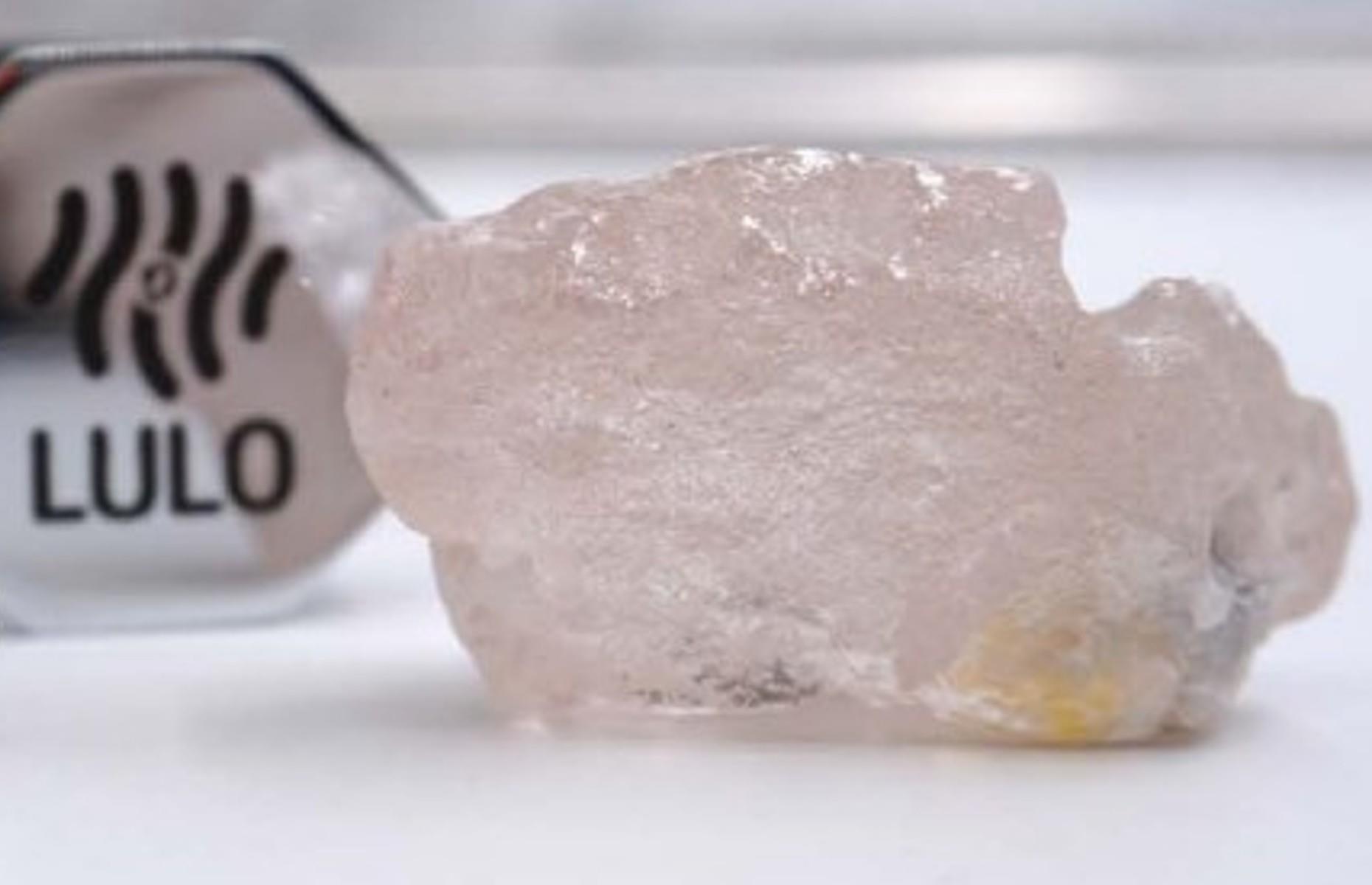 The largest pink diamond to be discovered in 300 years has recently been unearthed in the diamond-rich Lulo mines of Angola. The astoundingly rare Lulo Rose gemstone (pictured) weighs a whopping 170 carats.

This magnificent stone’s true value will remain unknown until it’s been cut and polished, but the comparable Pink Star diamond – which was 132.5 carats in raw form before being refined to 59.6 carats – fetched an incredible $71.2 million when it went under the hammer in 2017. Could the newly discovered Lulo Rose topple the stunning Pink Star as the most valuable diamond ever sold at auction?

We'll have to wait and see, but in the meantime, read on to feast your eyes on the world’s most expensive diamonds. All dollar amounts in US dollars. 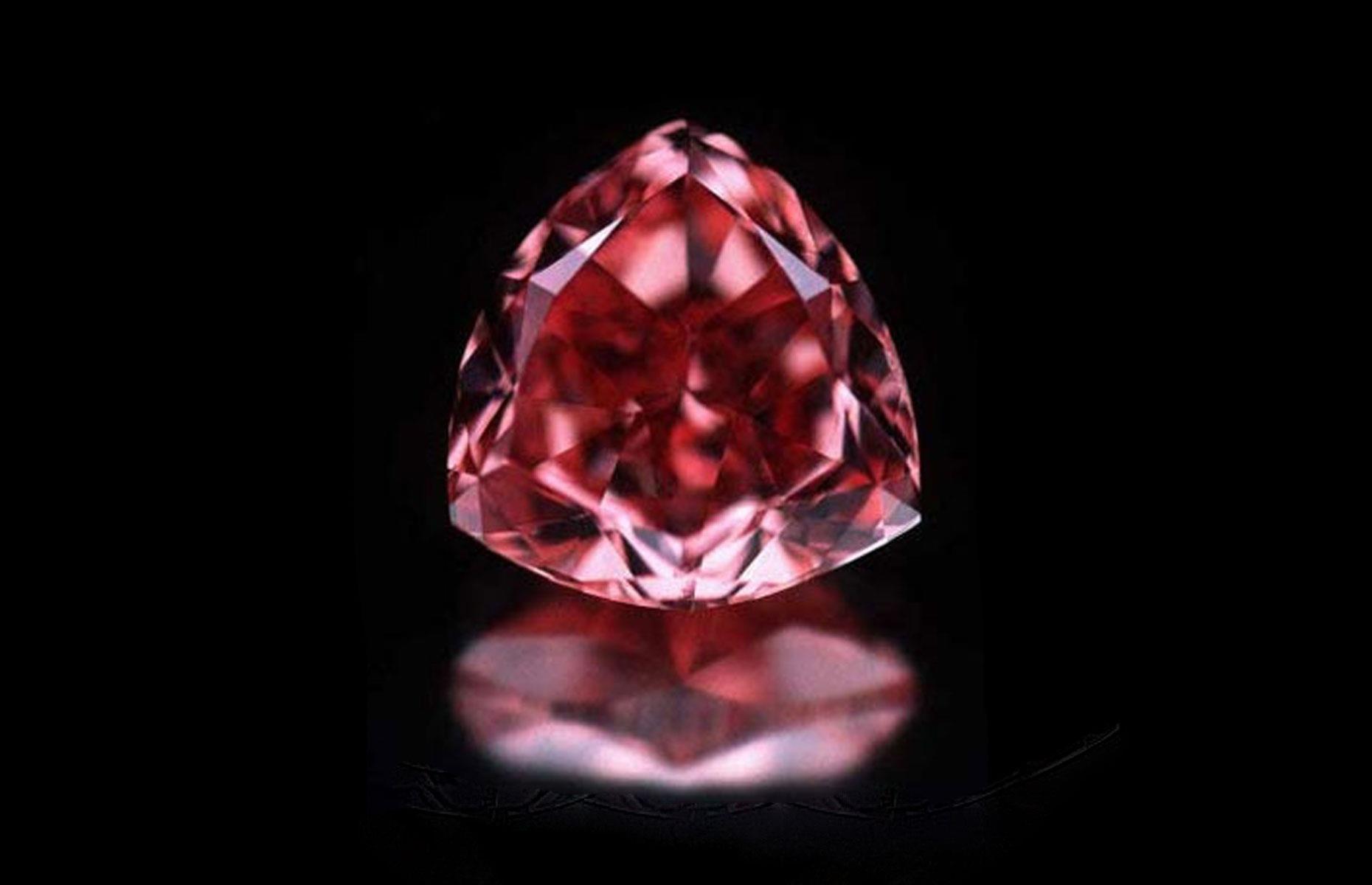 Of all the coloured diamonds, red gems are rarest – and this 5.11-carat crimson beauty is the largest cut specimen on the planet. It was discovered in the 1990s by a Brazilian farmer in the Abzetezinho River and was originally known as the Red Shield, until the diamond dealer Shlomo Moussaieff bought it for an undisclosed sum in 2001. The diamond is now worth around $20 million (£16.5m). 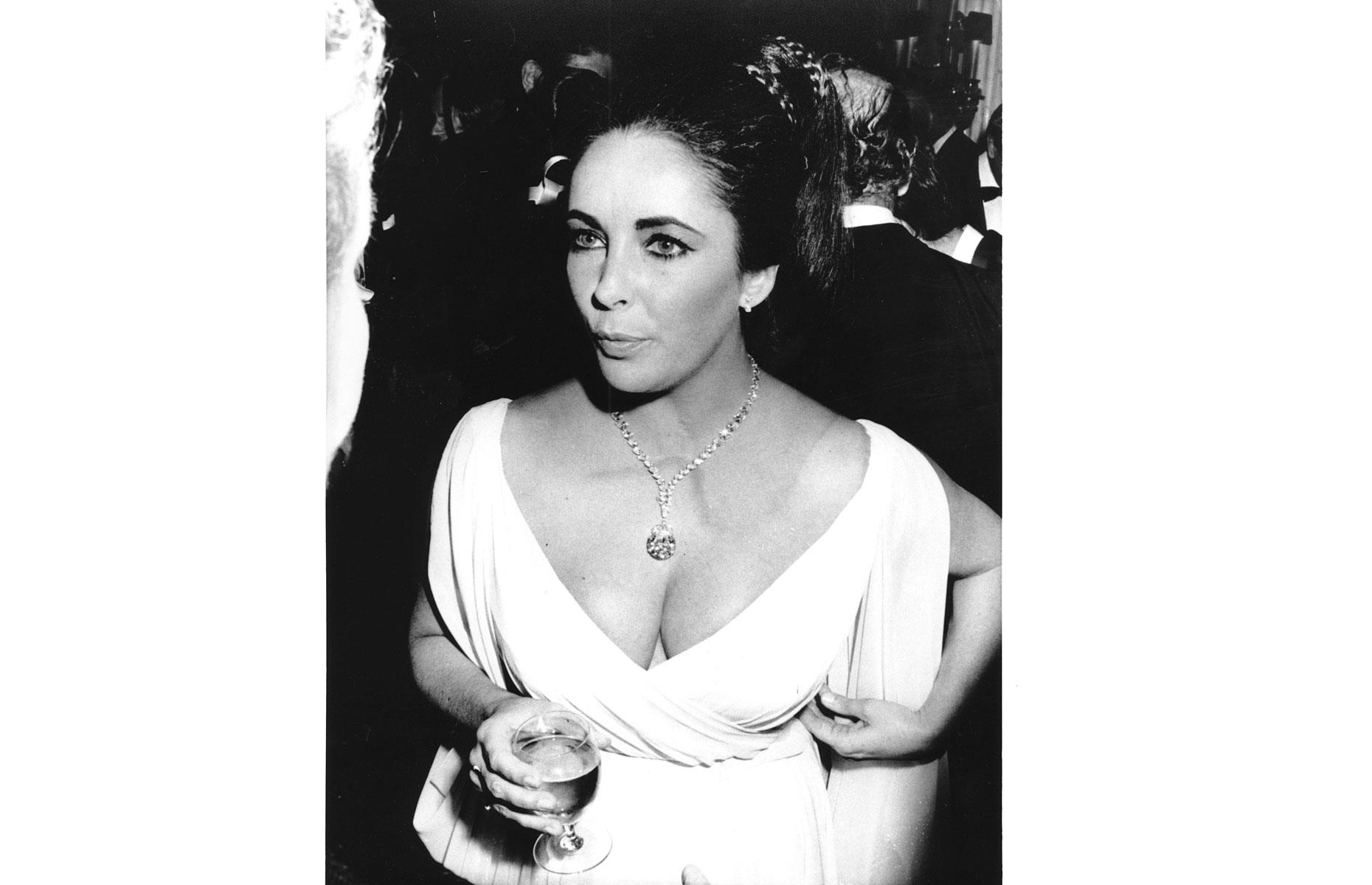 Set in a spectacular necklace, this 68-carat, pear-shaped diamond was bought by Richard Burton and Elizabeth Taylor in 1969. Taylor wore it to the 42nd Academy Awards in 1970 but sold it nine years later for $5 million, or $21.5 million (£17.7m) in today's money. It's now thought to be owned by jeweller Robert Mouawad. 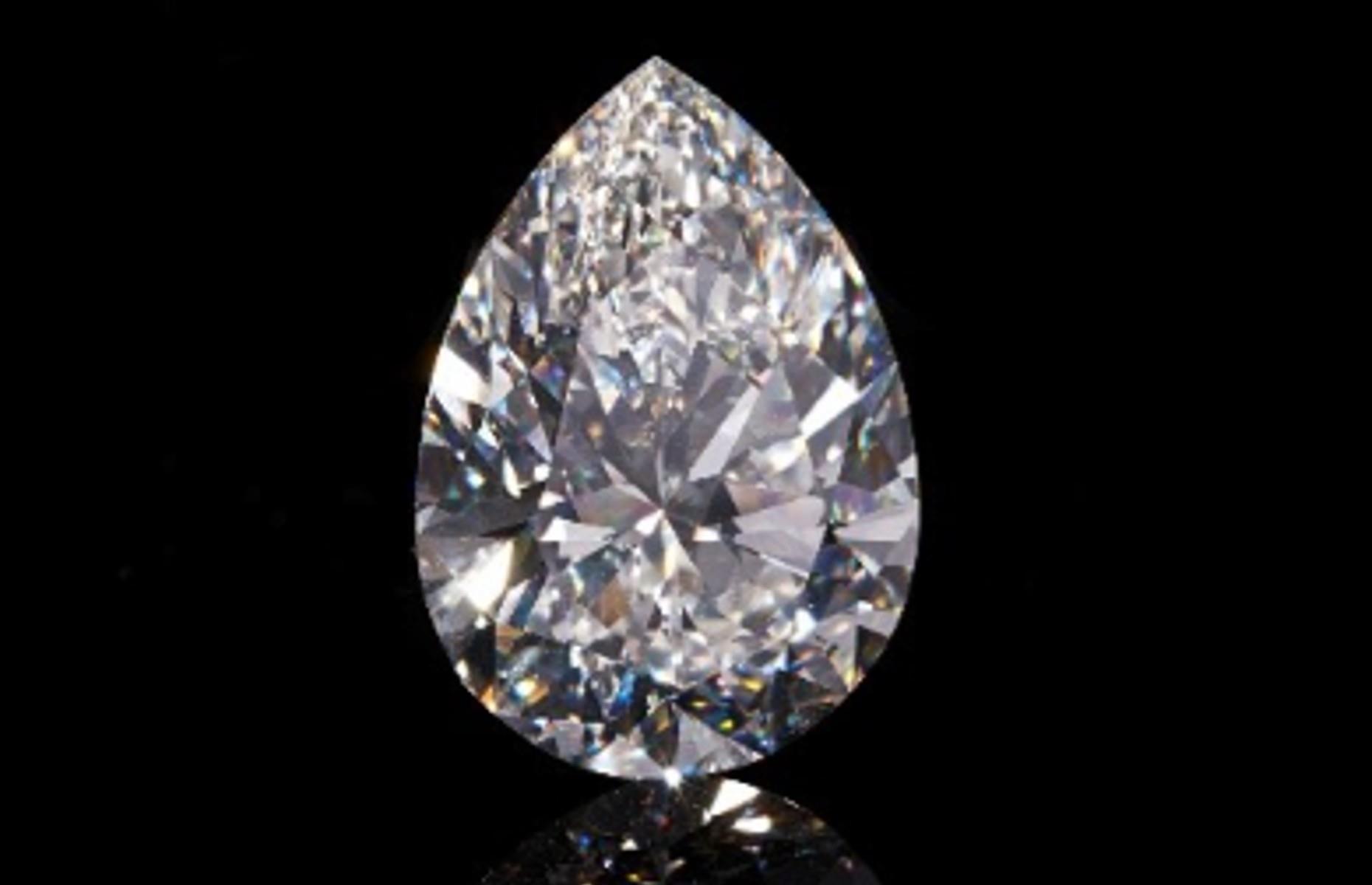 The largest white diamond to ever go under the hammer was sold at Christie’s in Geneva this year, fetching $21.9 million (£18m). Named The Rock, the dazzling 228.31-carat, pear-shaped gemstone is about the size of a golf ball and was previously worn as part of an opulent Cartier necklace. The Rock was expected to break the world record price of $33.7 million (£27.8m) for a white diamond but fell massively short of expectations. 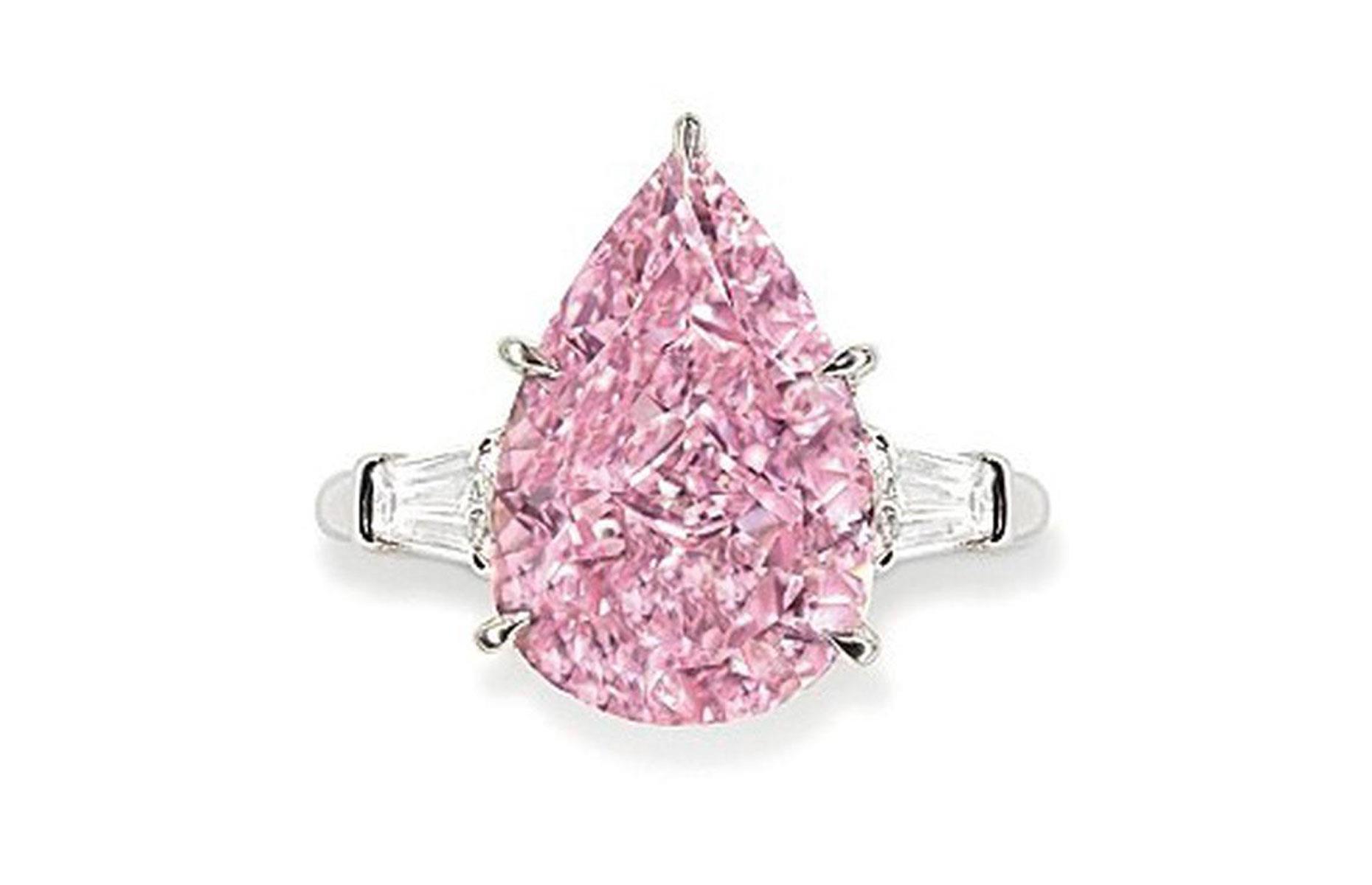 This glorious 9.14-carat pink diamond sold for over $18 million at Christie’s Geneva in 2016. In today's dollars, that's almost $22 million (£18.2m). Mounted on a Cartier ring, the pear-shaped jewel was bought by a private Asian collector who named it The Light of Memory. 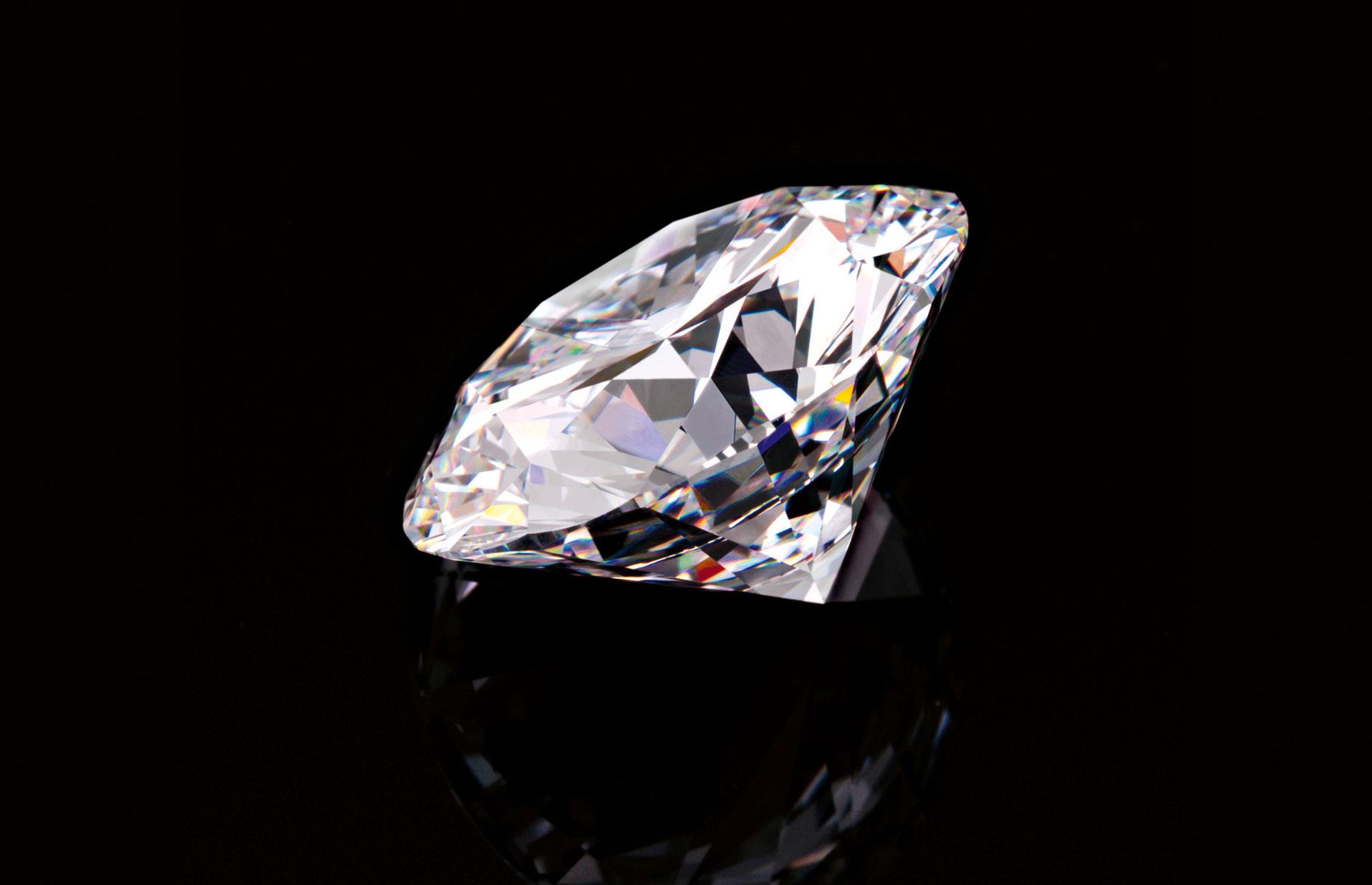 The Chloe Diamond is the world's largest colourless, brilliant-cut round diamond. The captivating gemstone was bought by George Marciano, co-founder of clothing brand Guess, for $16.2 million in 2007, which is around $23.1 million (£19.1m) in today's money. Marciano named the 84.37-carat diamond after his then-12-year-old daughter.

Formerly known as the Tereshchenko Diamond, the Mouawad Blue is the second largest blue diamond in the world. According to legend, the 42.92-carat diamond, which is said to have been stolen from the eyes of an ancient Hindi sculpture in India, is cursed. The original owner, Mikhail Tereshchenko, lost his fortune in the Russian Revolution. The diamond is now owned by Robert Mouawad, hence its new name, and thought to be worth $25 million (£20.6m) today.

This exquisite antique cushion-shaped diamond is a whopping 76.02 carats. Discovered in the same Indian mine as the much-admired Koh-i-Noor Diamond, the jewel is named after its first owner, Archduke Joseph August of Austria. Now part of a private collection, it sold for $21.5 million at Christie's Geneva in 2012. In today's money, that's a hefty $27.4 million (£22.6m). 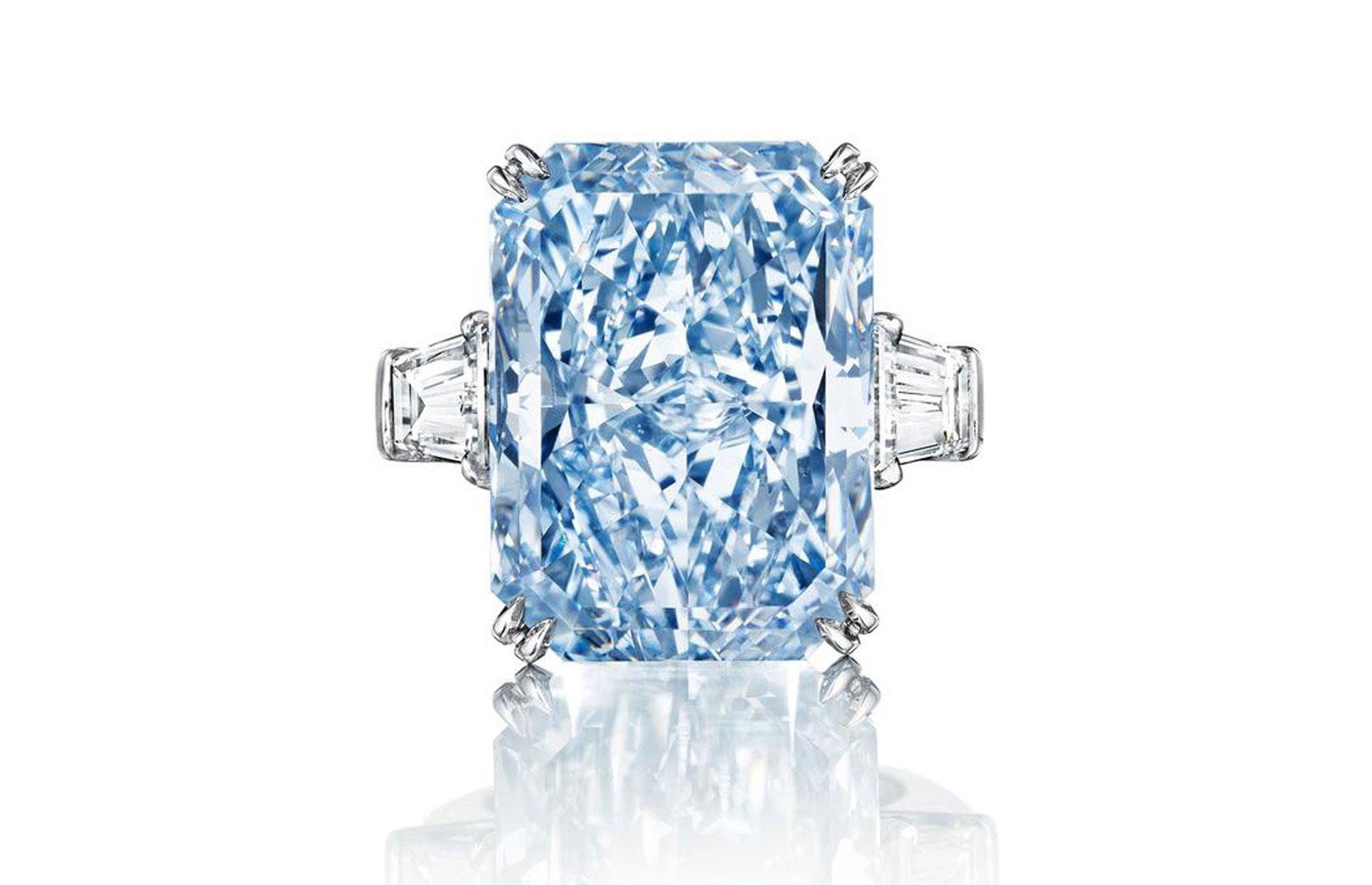 The flawless 24.18-carat Cullinan Dream was cut from a 122.52-carat stone that was discovered at Petra Diamond's Cullinan Mine in South Africa in 2014. One of the most expensive blue diamonds ever sold at auction, the gem fetched $25.4 million at a Christie's New York sale in June 2020. In today's money, that's an impressive $28.5 million (£23.5m). 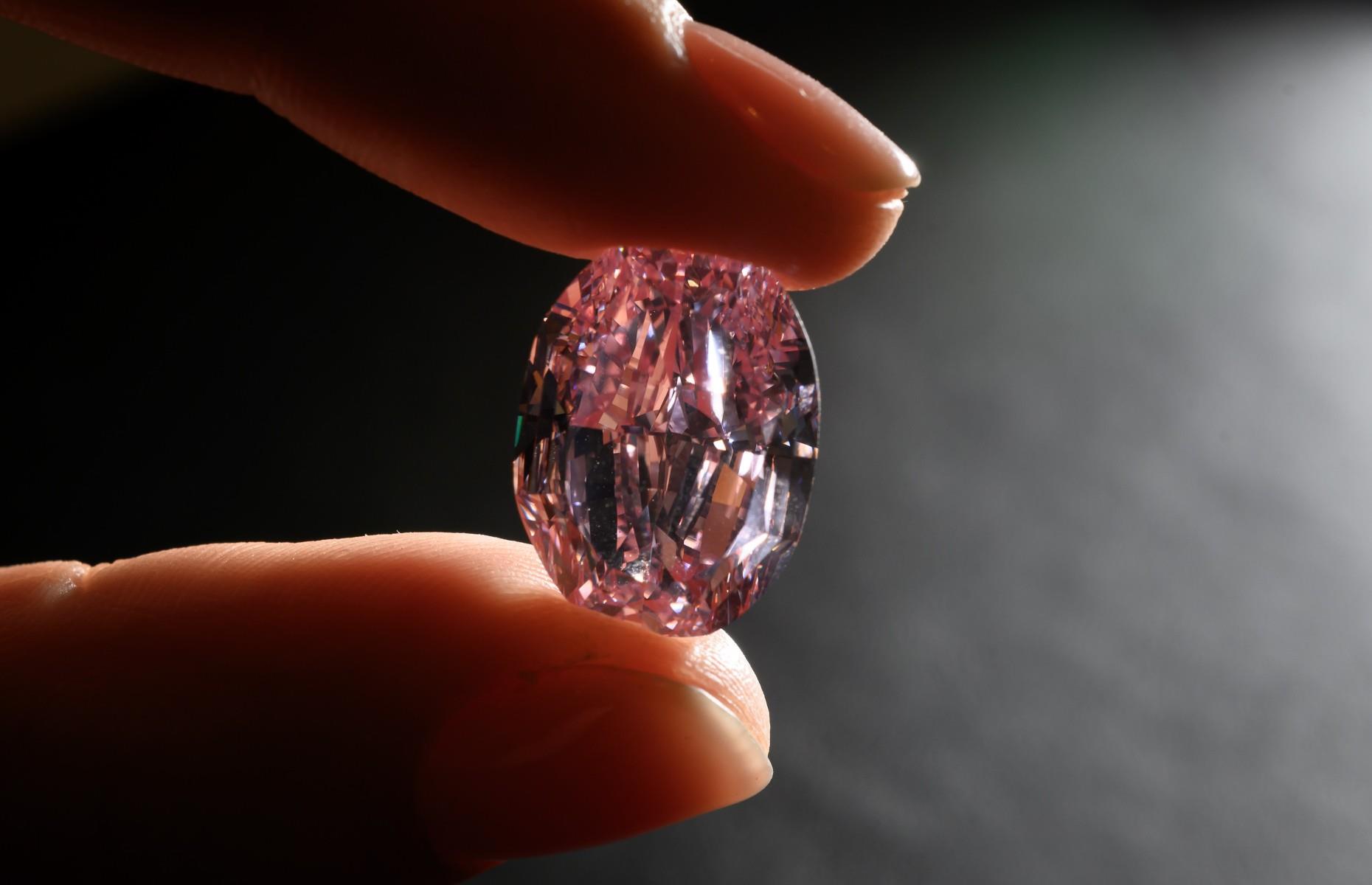 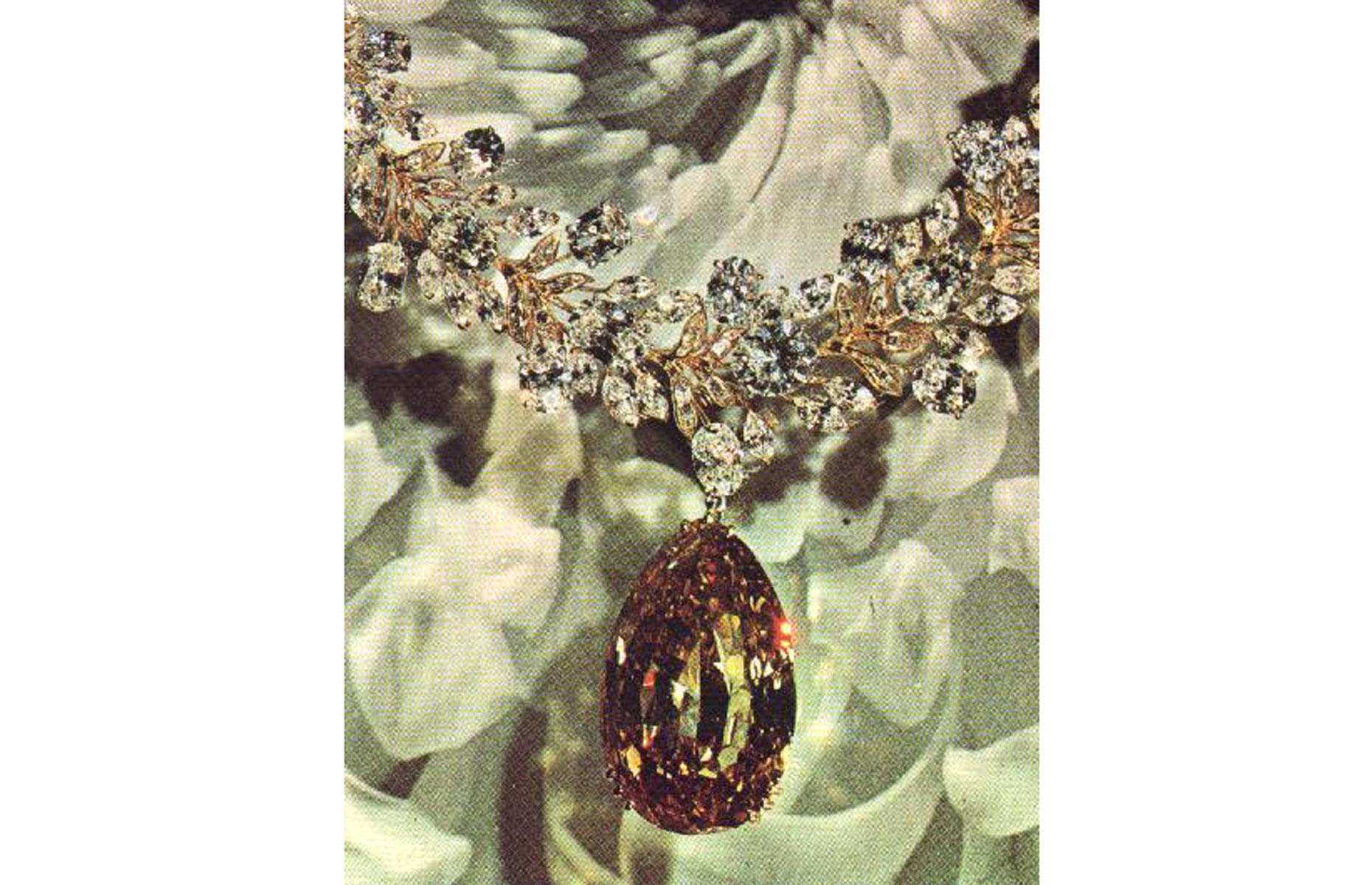 This striking orange-brown diamond was discovered in 1963 at the Kimberley Mines in South Africa and bought by jeweller Julius Cohen, who had the rough stone cut into a 104.15-carat gem. Cohen named the diamond the Great Chrysanthemum after the charitable Chrysanthemum Ball in Texas. Cohen later sold it on, and the diamond is currently stored in a private collection. Its current estimated value is $30 million (£24.8m). 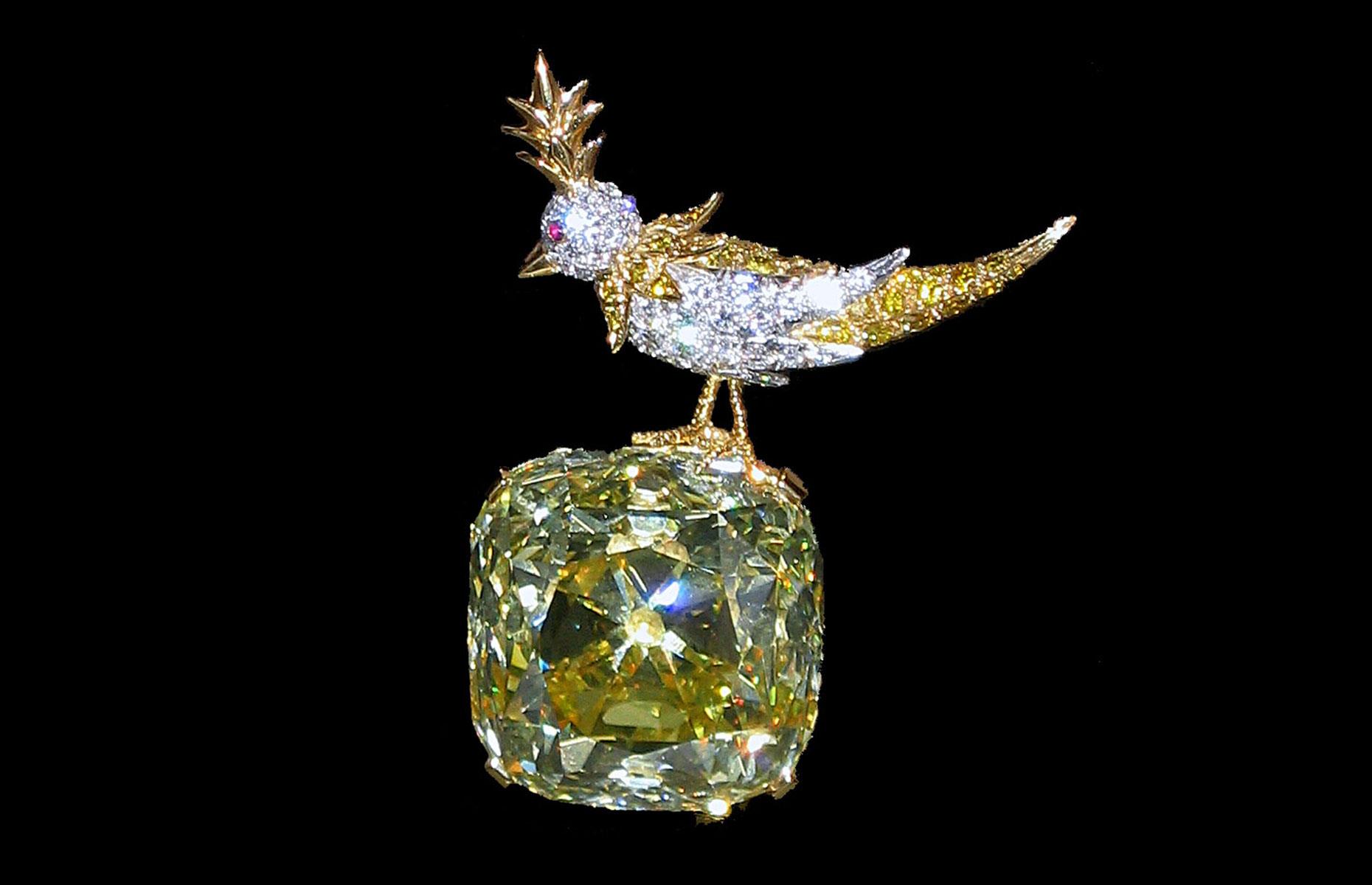 The handiwork of New York jeweller Tiffany & Co., this fabulous yellow diamond was worn by Hollywood icon Audrey Hepburn in 1961 in publicity photographs for the film Breakfast At Tiffany's. The 128.54-carat diamond was cut in 1888 and is still owned by the company. Apart from Audrey Hepburn, only four other women have worn the stone: Beyoncé, Lady Gaga, Gal Gadot, and Mrs Mary Whitehouse, who is married to US senator Sheldon Whitehouse. 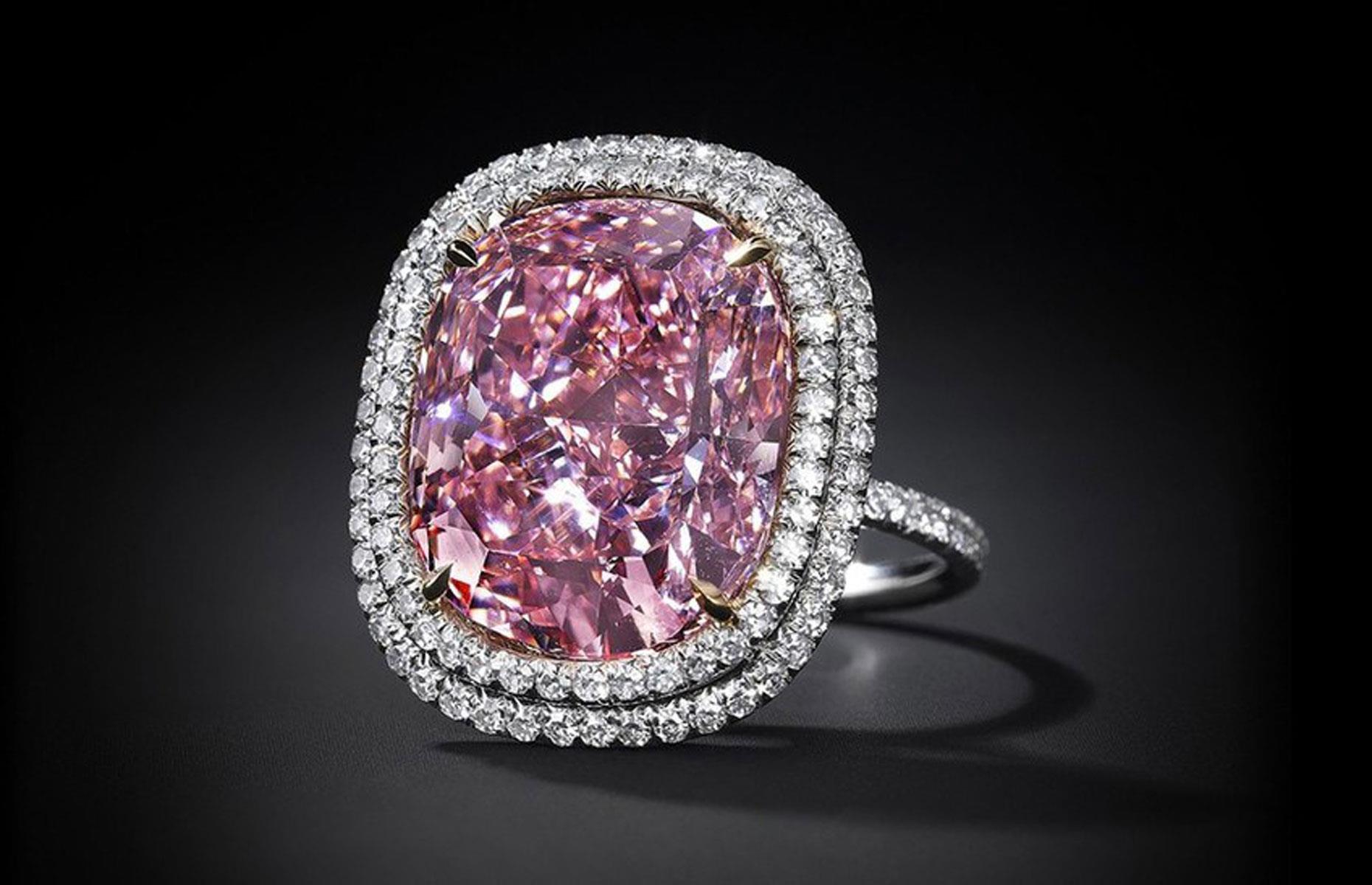 The Sweet Josephine Diamond is one of the most expensive vivid pink diamonds that has ever been sold at auction. The 16.08-carat rock was bought by Hong Kong billionaire Joseph Lau at a Christie's Geneva auction in 2015 for $28.7 million, which is $35.5 million (£29.3m) today. The stunning stone is named after his daughter. 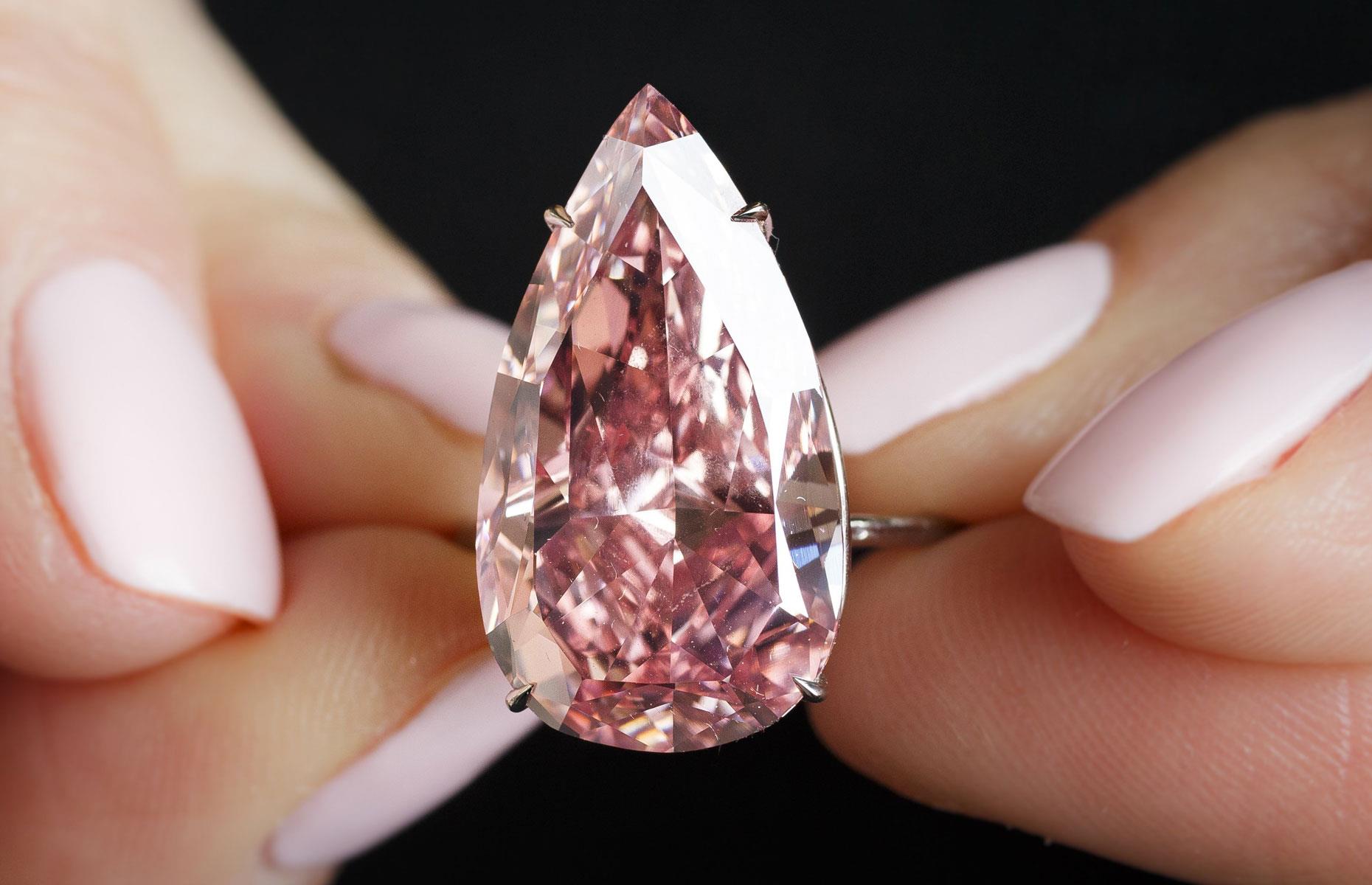 Mounted on a ring, the Unique Pink Diamond sold for $31.6 million when it went under the hammer at Sotheby's Geneva in May 2016, or $38.6 million (£31.8m) in today's money. The 15.38-carat jewel was bought by an anonymous Asian buyer and set a record for the most expensive pear-shaped pink diamond sold at auction. 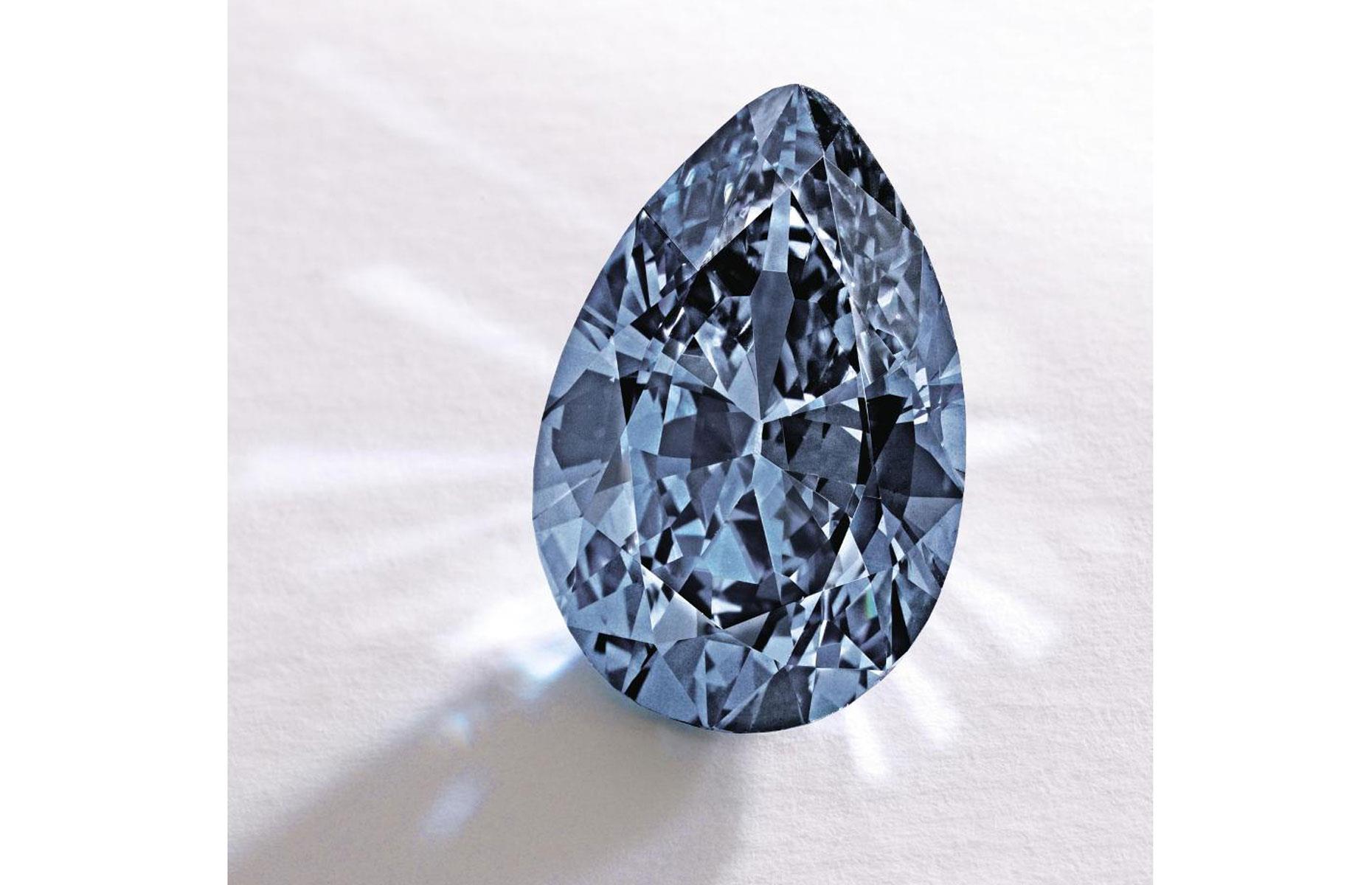 This 9.75-carat pear-shaped diamond was sold by the estate of philanthropist Rachel “Bunny” Lambert Mellon at a Sotheby's sale in 2014 for the equivalent of $40.3 million (£33.3m) in today's money. The azure stone was purchased by a private collector in Hong Kong, who named it the Zoe Diamond. At the time, it wasn't only the world's most expensive blue diamond, but also the world's most expensive diamond per carat. 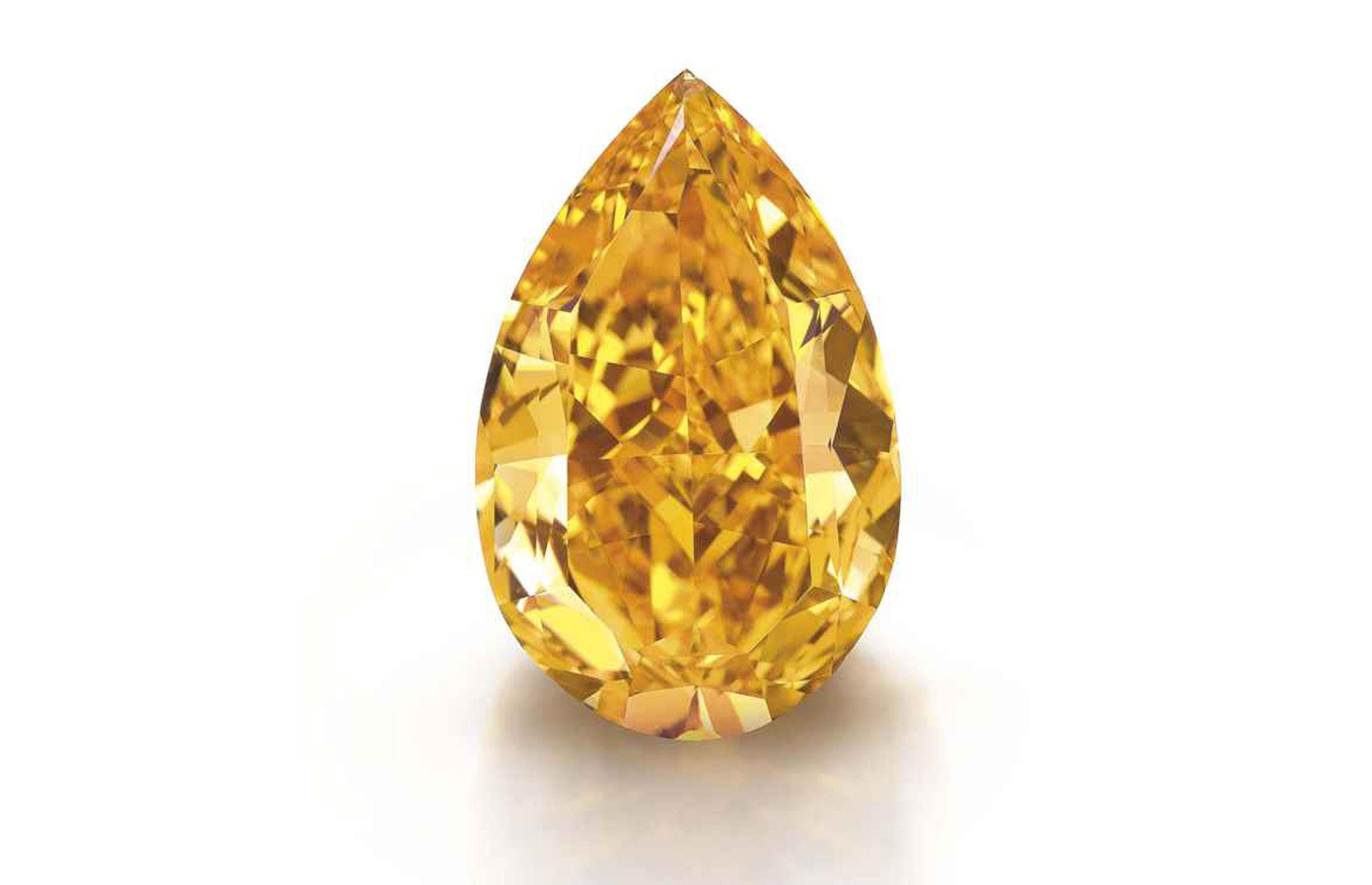 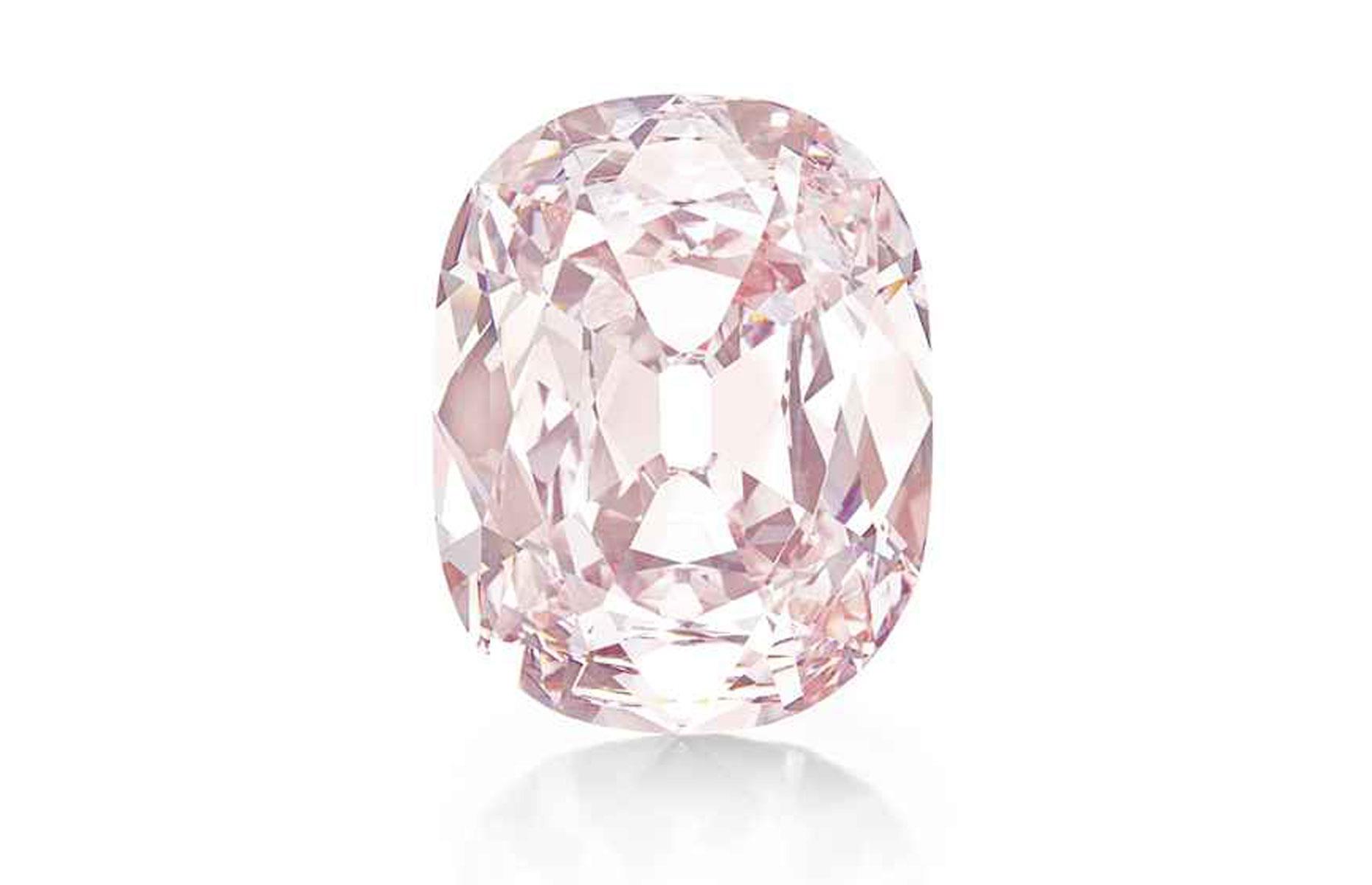 The Princie Diamond was discovered over 300 years ago in India. The 34.65-carat stone, which once belonged to the Nizam of Hyderabad, was named in honour of the Maharaja of Baroda's son by jeweller Pierre Arpels in 1960. The diamond was sold at Christie's New York in 2013 for $39.3 million, or $49.3 million (£40.7m) today. 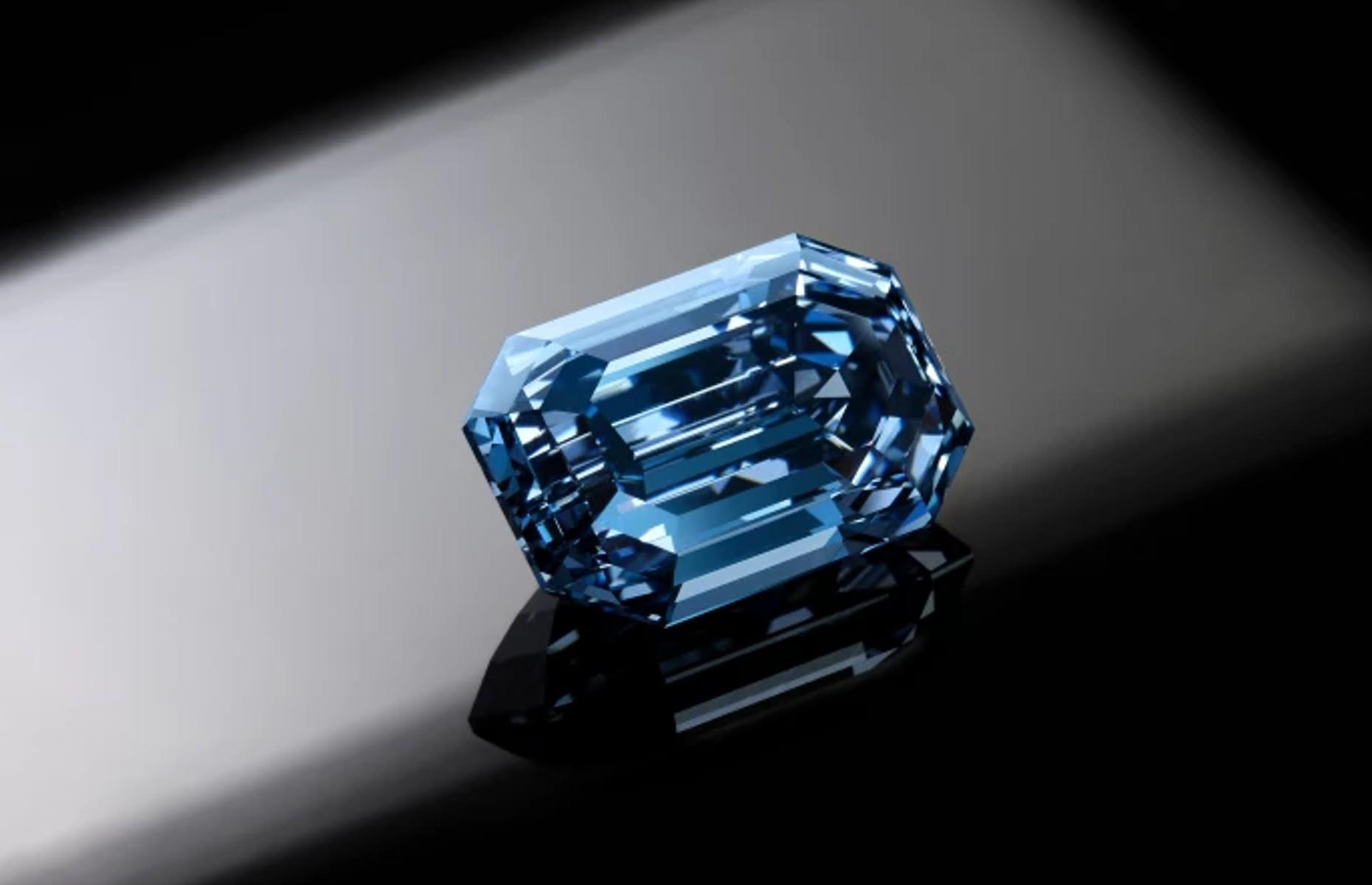 The De Beers Cullinan Blue fetched just shy of $57.5 million (£47.4m) at a Sotheby’s auction this year, narrowly missing out on the record sale price for a blue diamond. Discovered in 2021 at Cullinan Mine in South Africa, the rare 15.10-carat rock is graded internally flawless. 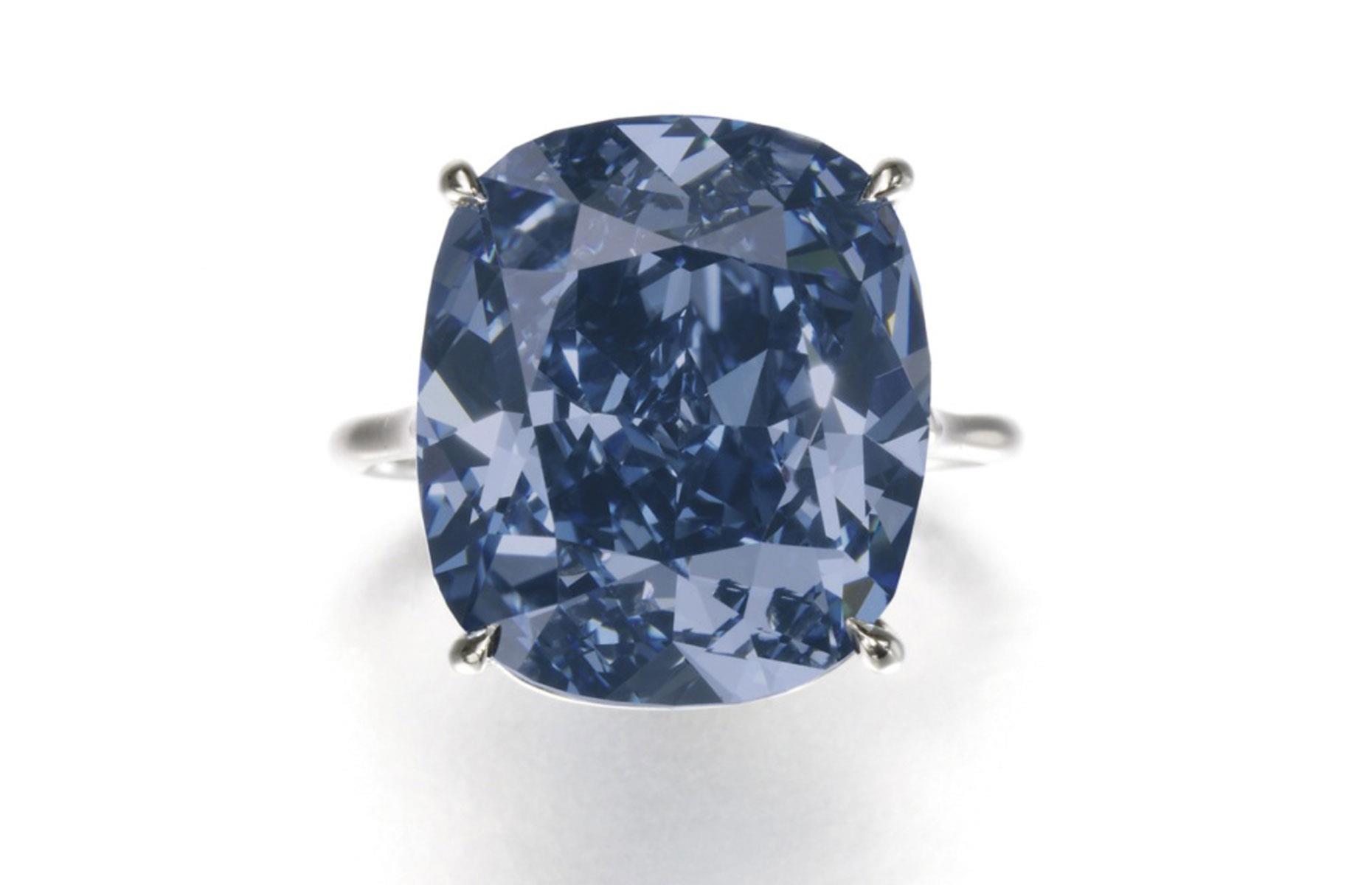 Discovered at a South African mine in 2014, this exceptional 12.03-carat blue diamond was bought by Joseph Lau for $48.4 million in 2015, which is $59.9 million (£49.4m) today – just one day after he snapped up the Sweet Josephine gemstone. Lau named both diamonds after his daughter Josephine.

The 140.64-carat Regent Diamond is owned by the French government and kept at the Louvre in Paris. According to legend, the diamond was discovered in India in 1698 by an enslaved person who was later murdered by an English sea captain. The jewel, which is said to be cursed, ended up in the collection of the French Regent, Philippe II, Duke of Orléans, and was requisitioned by the state after the French revolution in 1799. 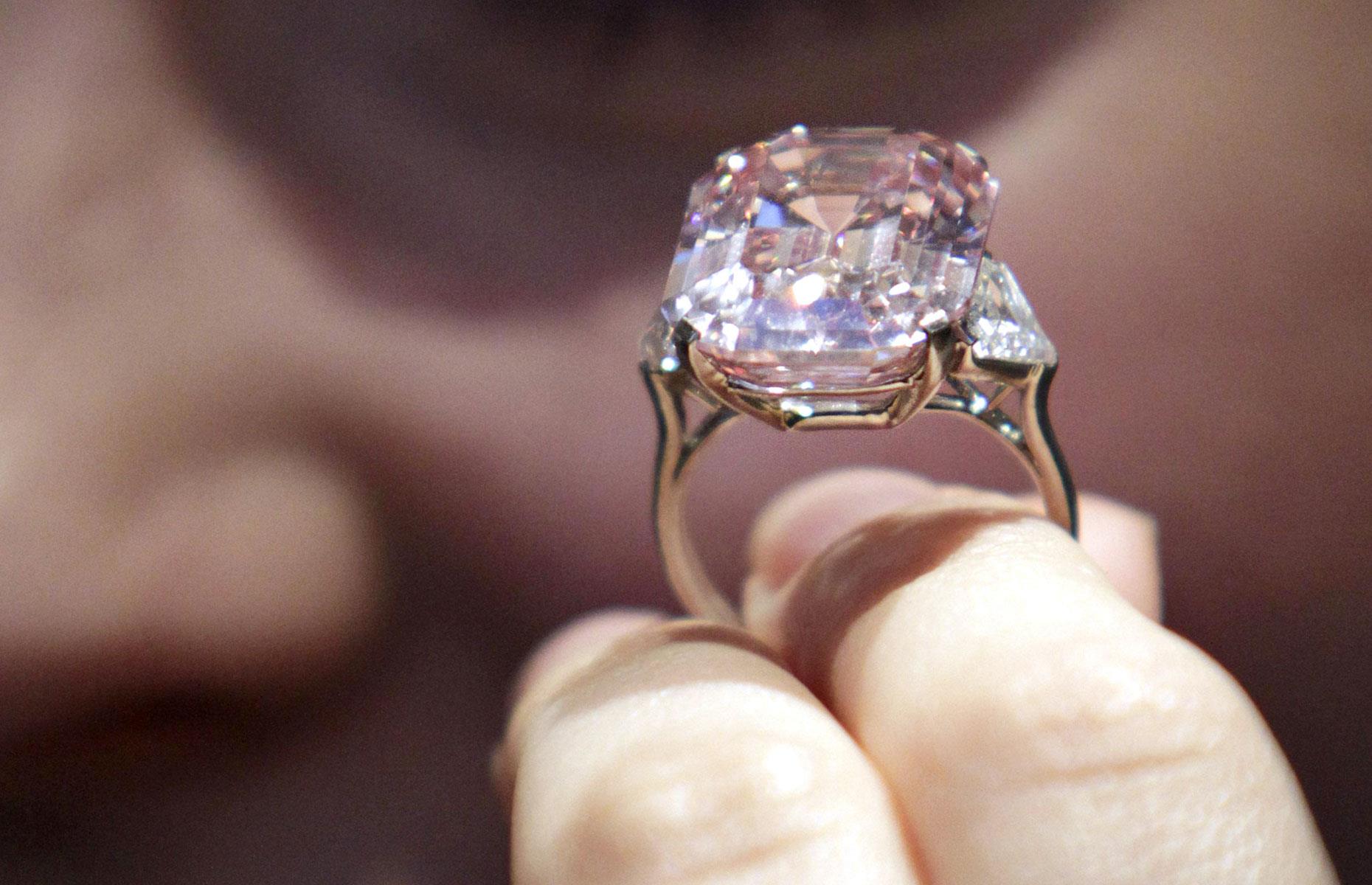 This emerald-cut pink diamond sold for $46.1 million at a Sotheby's auction in 2010. In today's money, that's a staggering $61.5 million (£50.7m). Hailed as one of the greatest diamonds ever discovered, the 24.78-carat gem was bought by jeweller Laurence Graff. 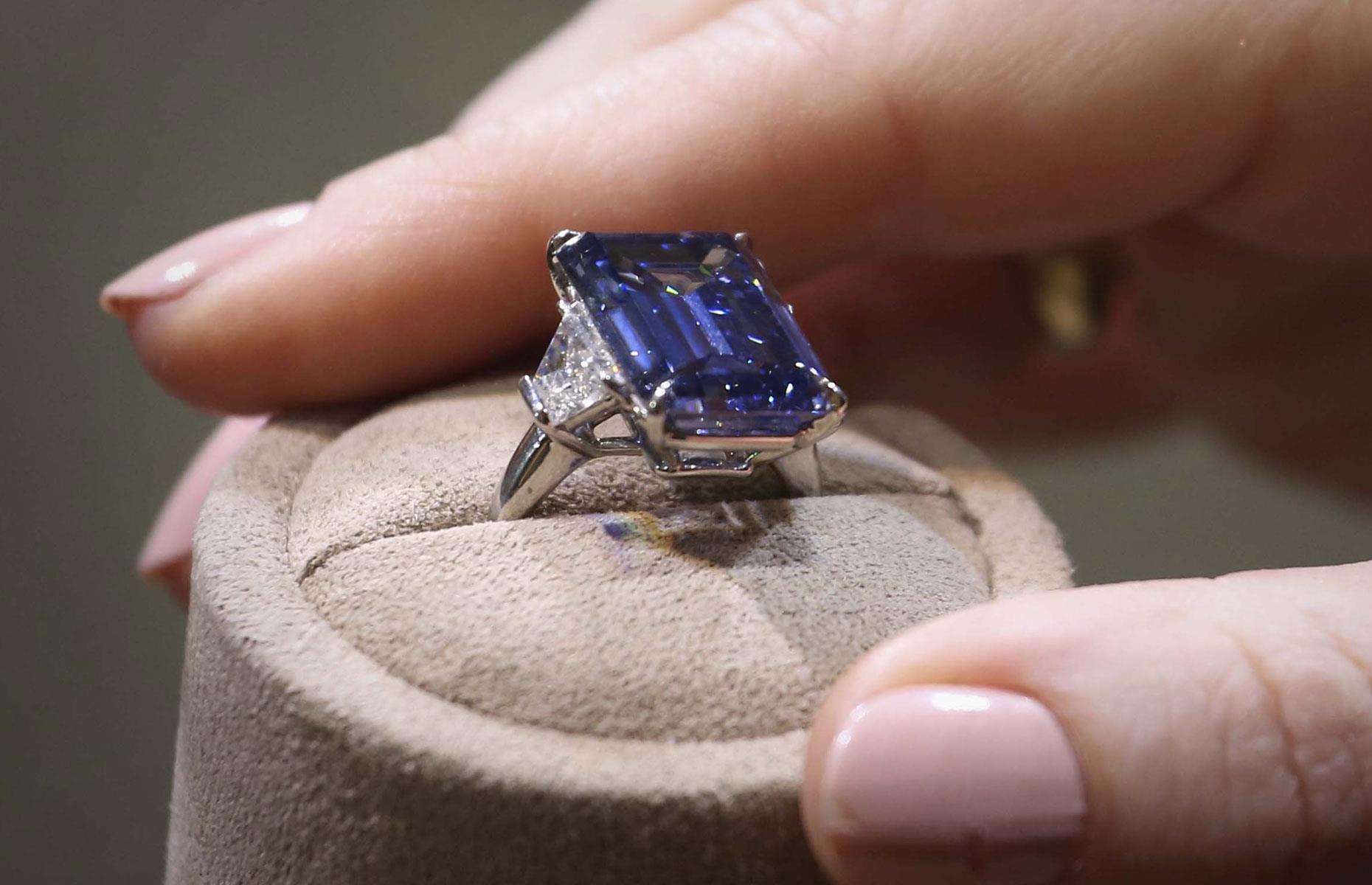 Named after its former owner, Sir Philip Oppenheimer, this 14.62-carat blue diamond was sold for more than $57.5 million at auction in 2016. In today's money, that's $70.2 million (£57.9m). The dazzling rock currently holds the record for the most expensive blue diamond ever sold at auction. 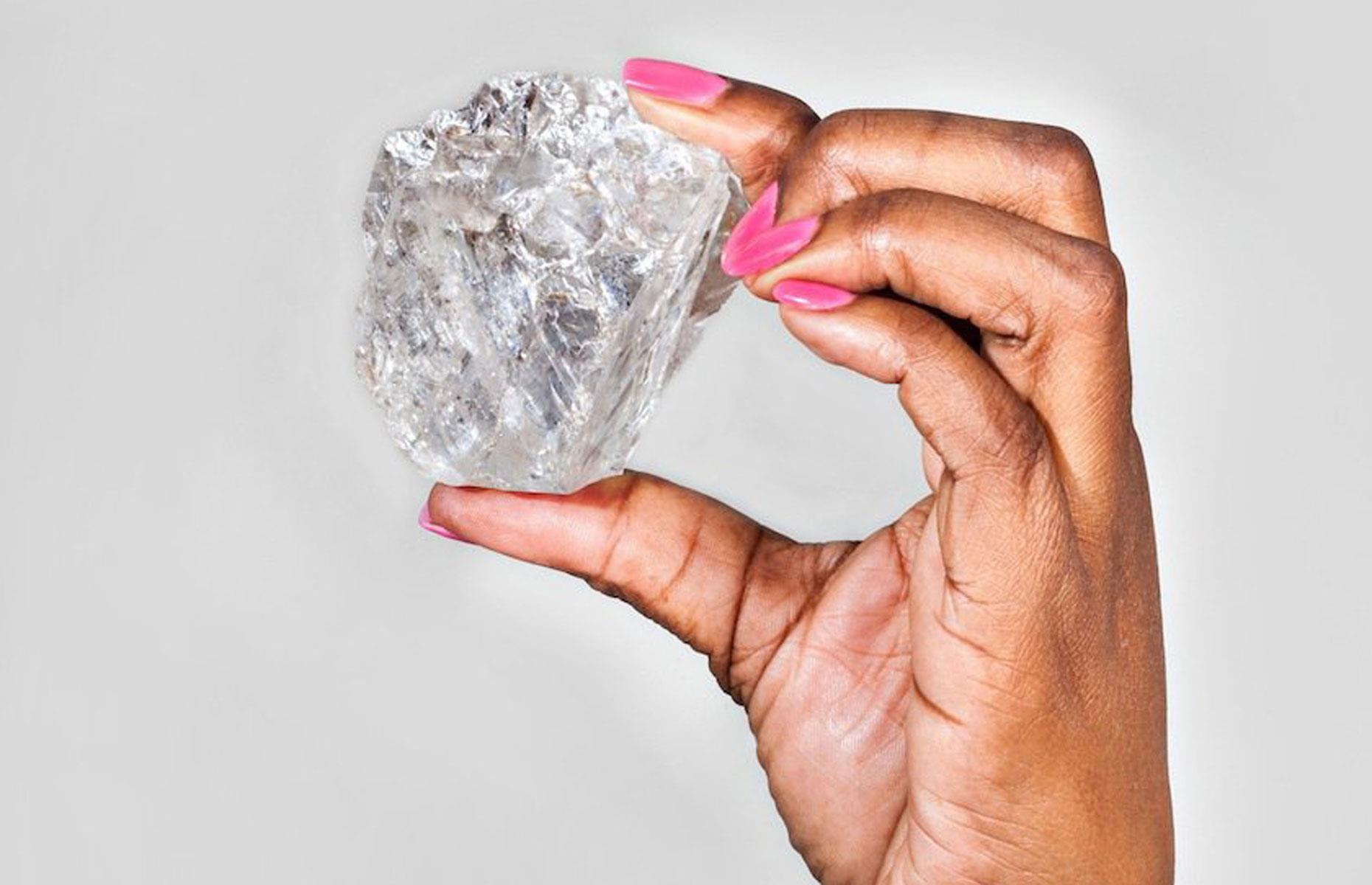 This gigantic 813-carat rock holds the world record for the most expensive rough diamond, selling for $63.1 million in 2016, which is $77 million (£63.5m) today. The largest diamond to be discovered in over a century, the Constellation Diamond was mined in 2015 by the Lucara Diamond Corp from its Karowe mine in Botswana and sold to jeweller De Grisogono. 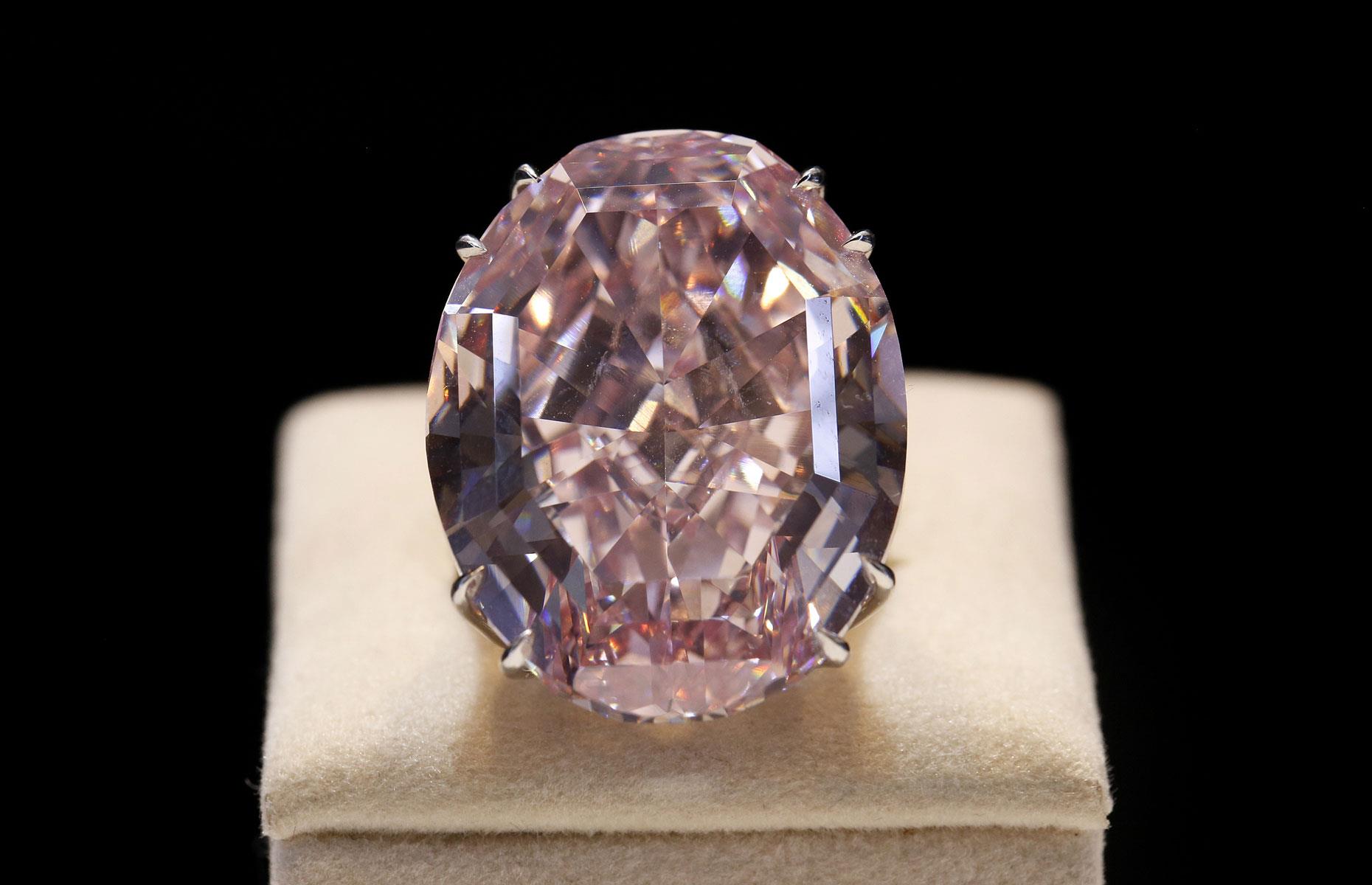 In 2017, the famous Pink Star Diamond became the most expensive cut gemstone ever sold at auction when it fetched a staggering $71.2 million. In today's money, that's a whopping $86.1 million (£71m). It also held the record of being the world's largest flawless vivid pink diamond, though the newly discovered Lulo Rose has smashed this record. The gemstone was originally bought by diamond cutter Isaac Wolf, but he was unable to settle the enormous bill, so it's now owned by Hong Kong-based company Chow Tai Fook Enterprises. 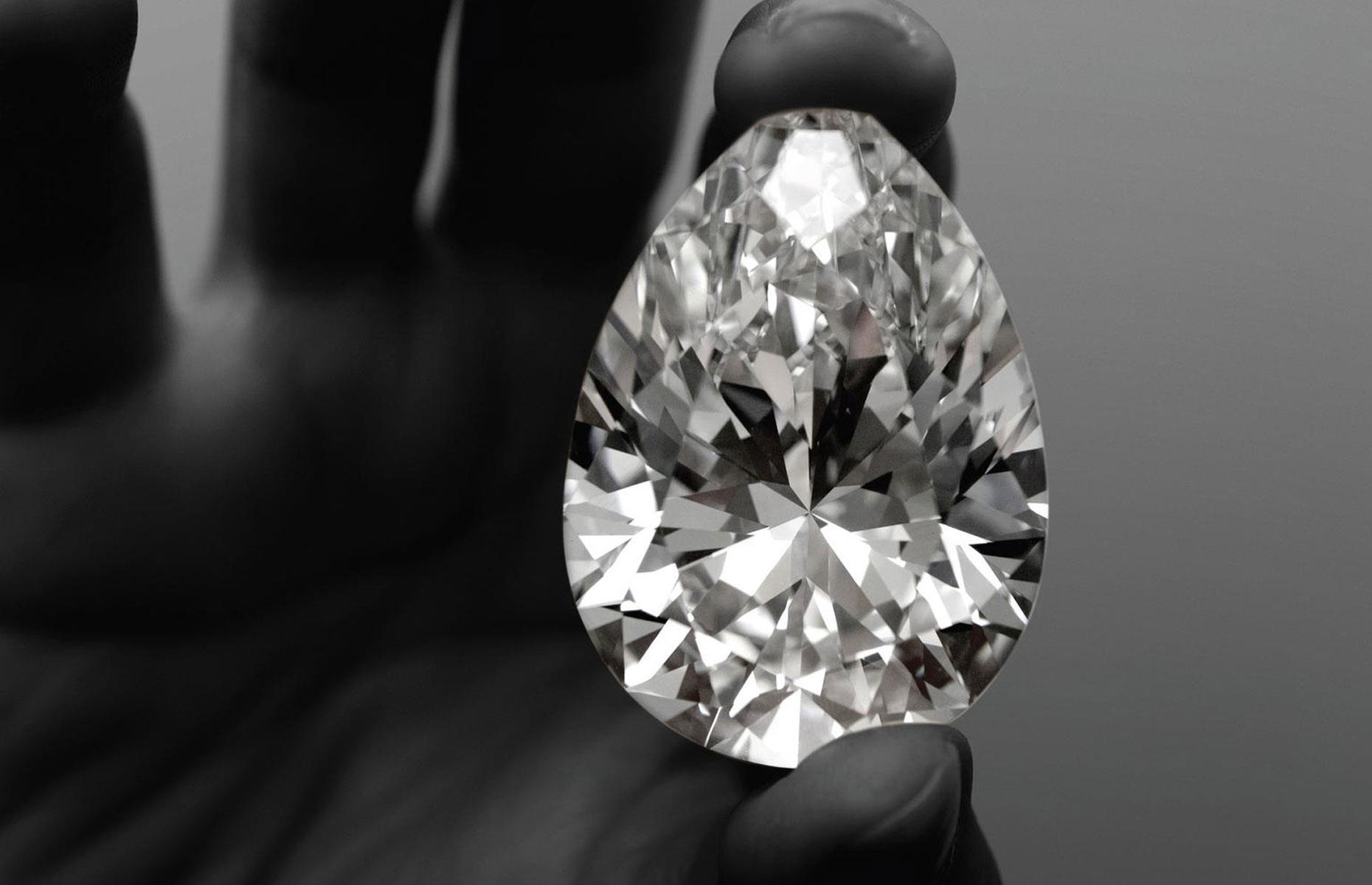 In 2016, luxury London department store Harrods unveiled its eponymous 228.31-carat rock, which was put up for sale after languishing in the store's vaults for years. The value of the diamond is thought to be a huge $90 million (£74.2m). 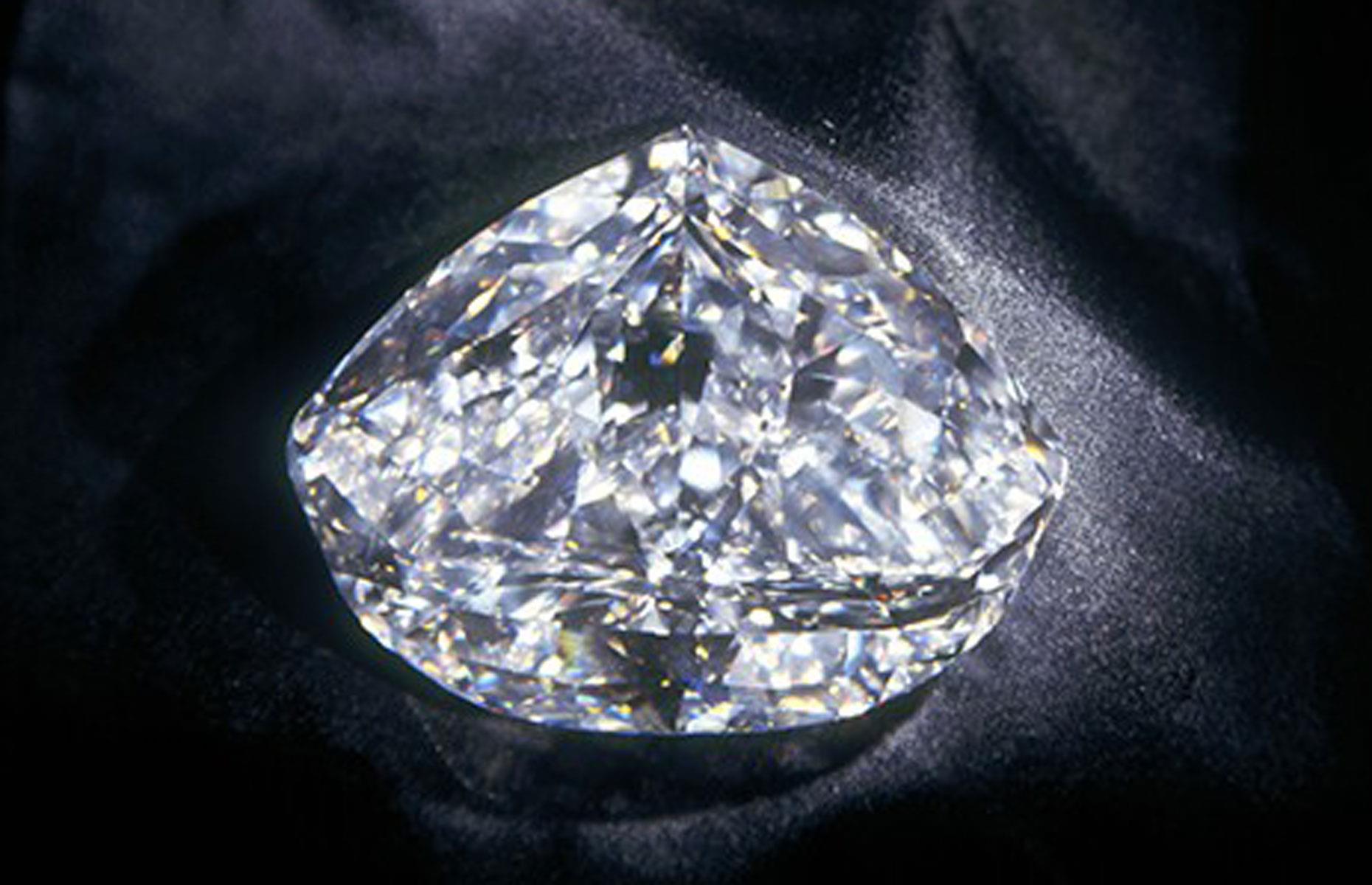 Discovered in South Africa's Cullinan Mine in 1986, this alluring 273.85-carat rock is one of the largest cut white diamonds in the world. Although it's still known as the De Beers Diamond, the jewellers De Beers sold the stone to an anonymous collector some years ago. 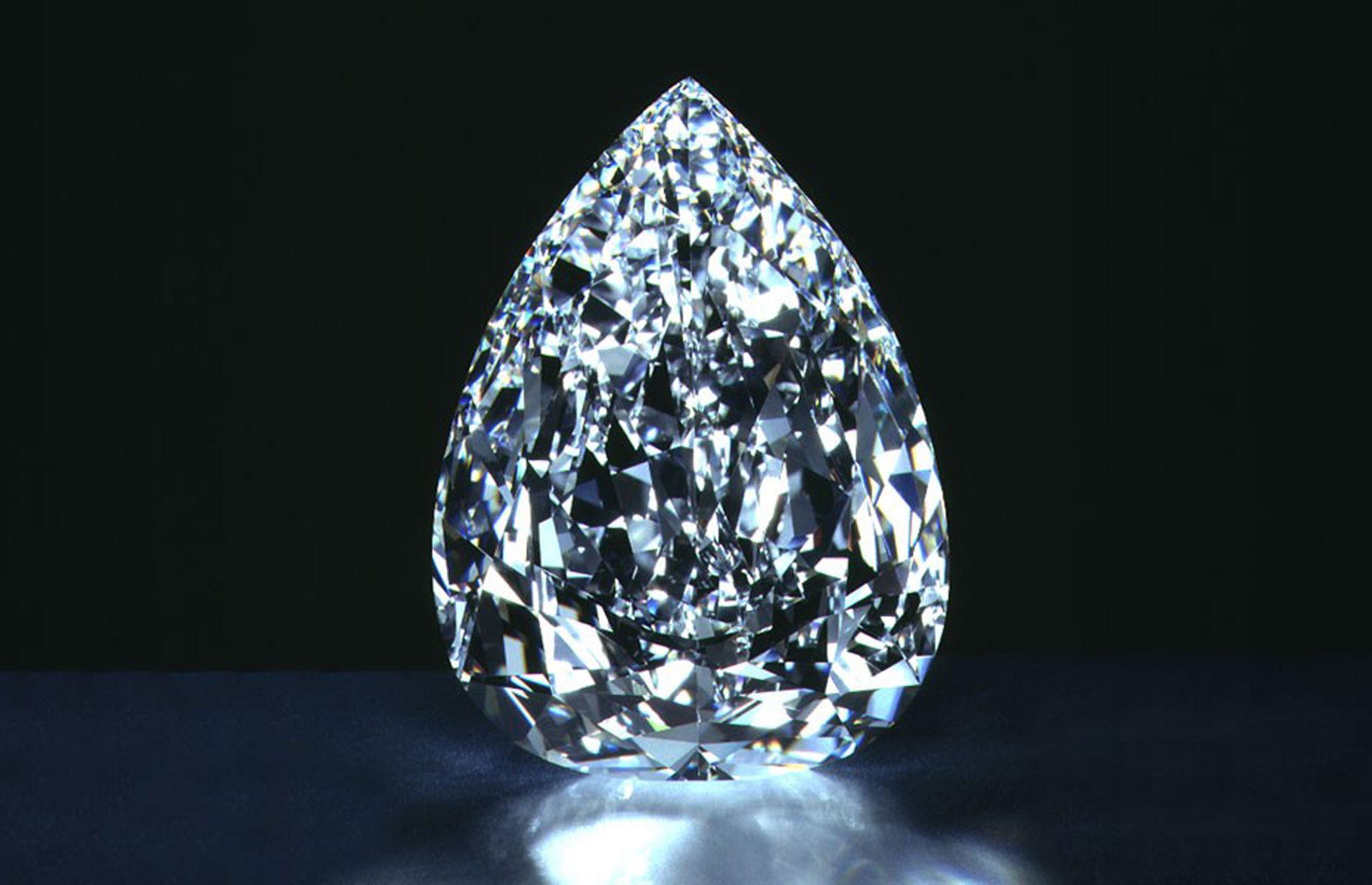 De Beers may have sold its Centenary Diamond, but the firm still owns the breathtaking 203.04-carat Millennium Star. Unearthed in Zaire (now the Democratic Republic of the Congo) back in 1990, the jewel was precision-cut using lasers and first displayed in October 1999 as the centrepiece of the De Beers Millennium Diamond Collection. Jeweller Laurence Graff bought the Wittelsbach-Graff Diamond at auction in 2008 for $24.3 million. Graff made some controversial changes to the gemstone, recutting it to remove damage and enhance its distinctive colour. Although the diamond lost 4.52 carats in the process, it now has a rating of Internally flawless (IF), meaning its value has increased. The diamond was sold to the former Emir of Qatar, Hamad bin Khalifa, for at least $80 million in 2011, which is $105 million (£86.6m) today. 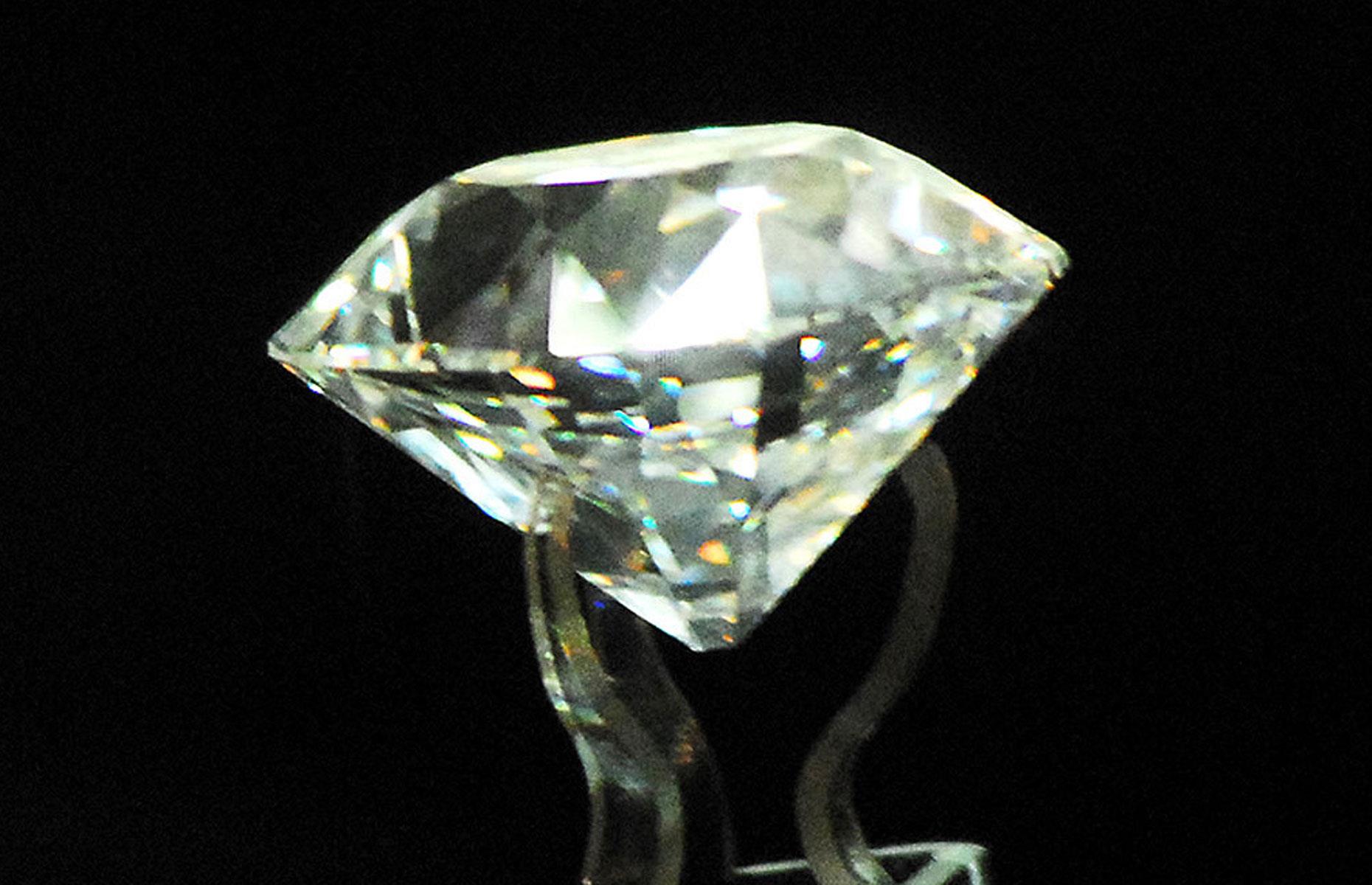 The Jacob Diamond was discovered in 1884 and put up for sale by gemstone trader Alexander Malcolm Jacob in 1891. The then-Nizam of Hyderabad, Mahboob Ali Khan, bought the stone and it ended up being used as a paperweight by the last Nizam, Mir Osman Ali Khan. The jewel was later acquired by the government of India from the Nizam's trust for a rumoured $13 million in 1995. It's worth an estimated $113 million (£93.2m) today. 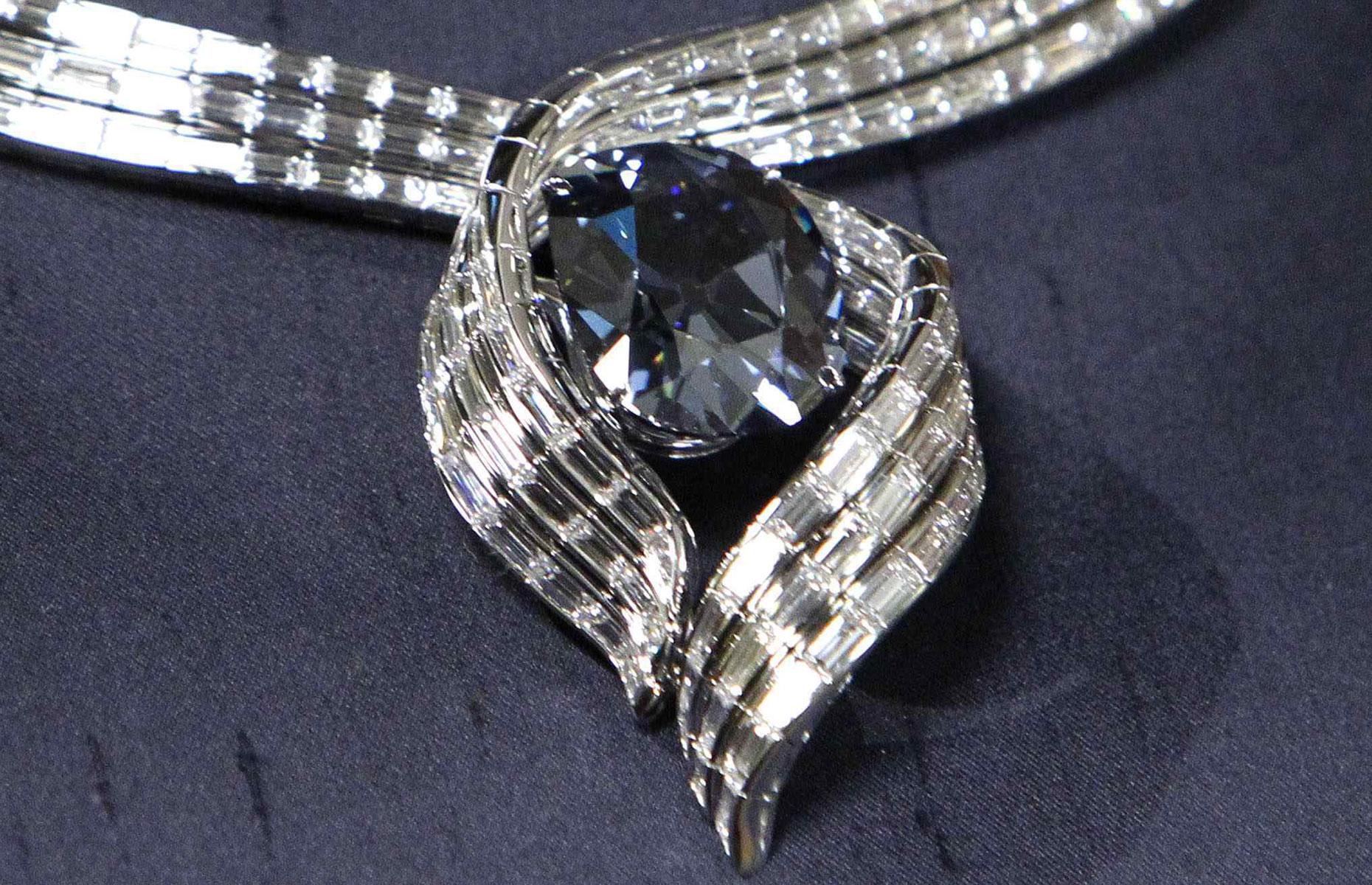 Like the Mouawad Blue and Regent diamonds, the renowned Blue Hope Diamond is said to carry a curse, bringing misfortune to anyone who owns or wears it. Nevertheless, this hasn't put buyers off. Mined in India back in the early 17th century, the 45.52-carat rock has passed through a number of owners over the years, including King Louis XIV of France. It's now the property of the Smithsonian Institution, a museum and research complex. It's estimated to be worth around $250 million (£206.2m) today.

The 186-carat Daria-i-Noor, which means "sea of light," forms part of the Iranian Crown Jewels. The pale pink jewel was discovered in India centuries ago and was owned by the Kakatiya dynasty in the 11th century. Given its historical significance, the diamond is considered priceless. 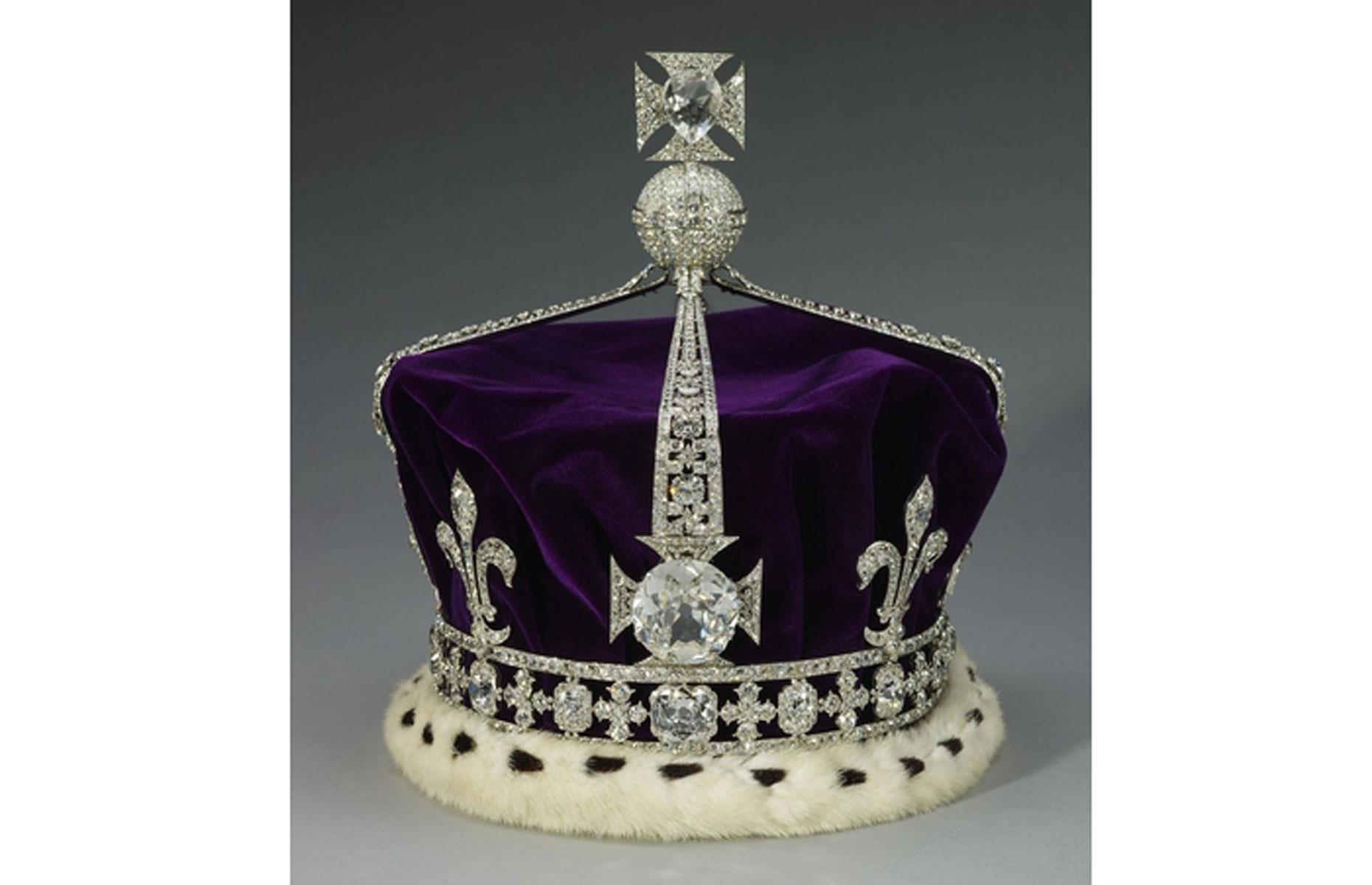 One of the star attractions of England's glittering Crown Jewels, the fabled Koh-i-Noor ("mountain of light") diamond is set in the Queen Mother's Crown. Discovered in the 13th century, the priceless 105.602-carat gemstone was first owned by the Kaktiya dynasty and controversially passed on, under dubious circumstances, to Queen Victoria in 1849. The Indian government has been campaigning for its rightful return since 1947. 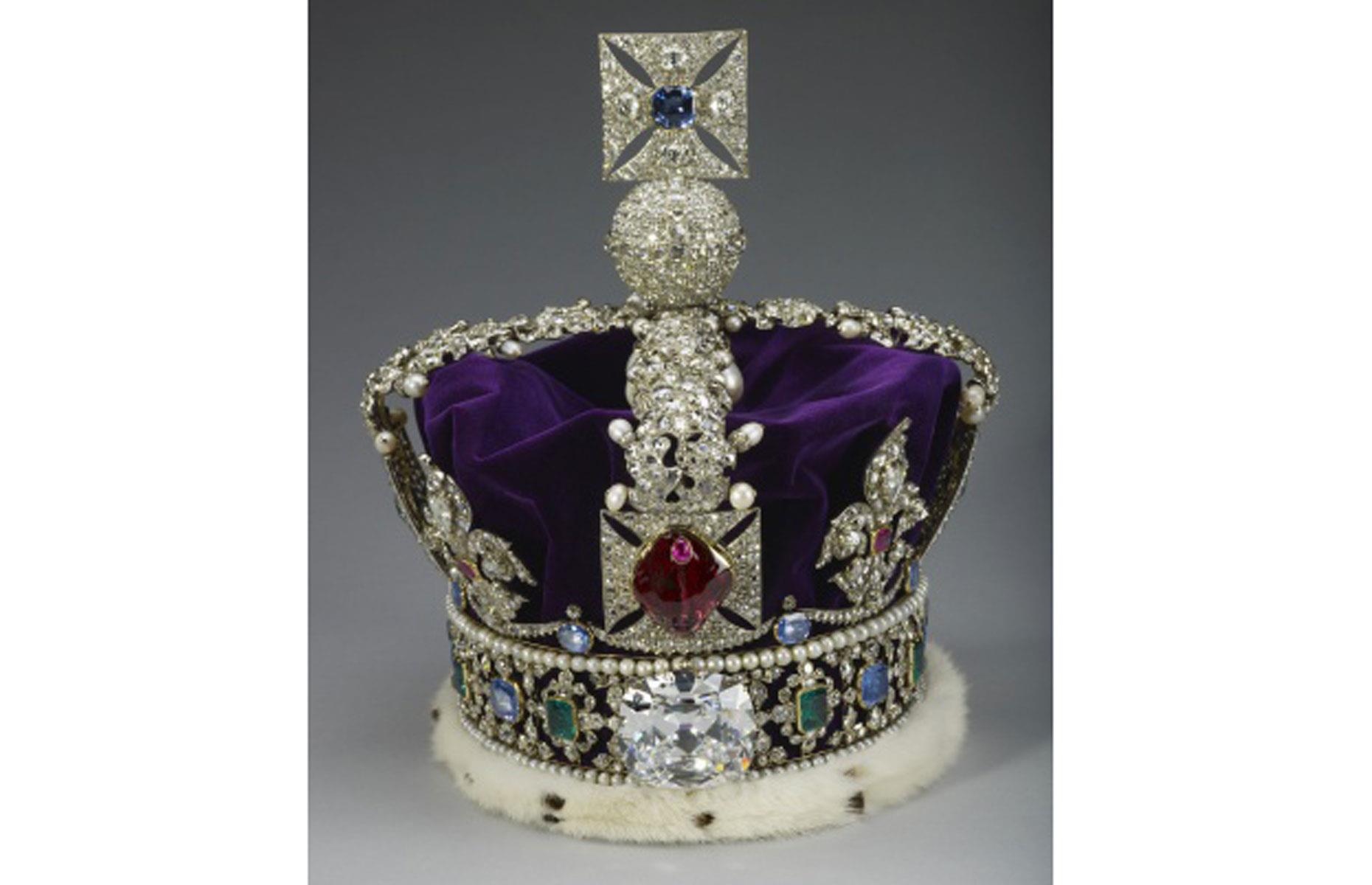 The Cullinan II, also known as the Second Star of Africa, was cut from the Cullinan Diamond, which weighed a staggering 3,106.75 carats in its rough state. The splendid diamond was mined in South Africa back in 1905 and given to Britain's King Edward VII. Regarded as priceless, the 317.4-carat Cullinan II is set in the front of the Imperial State Crown. 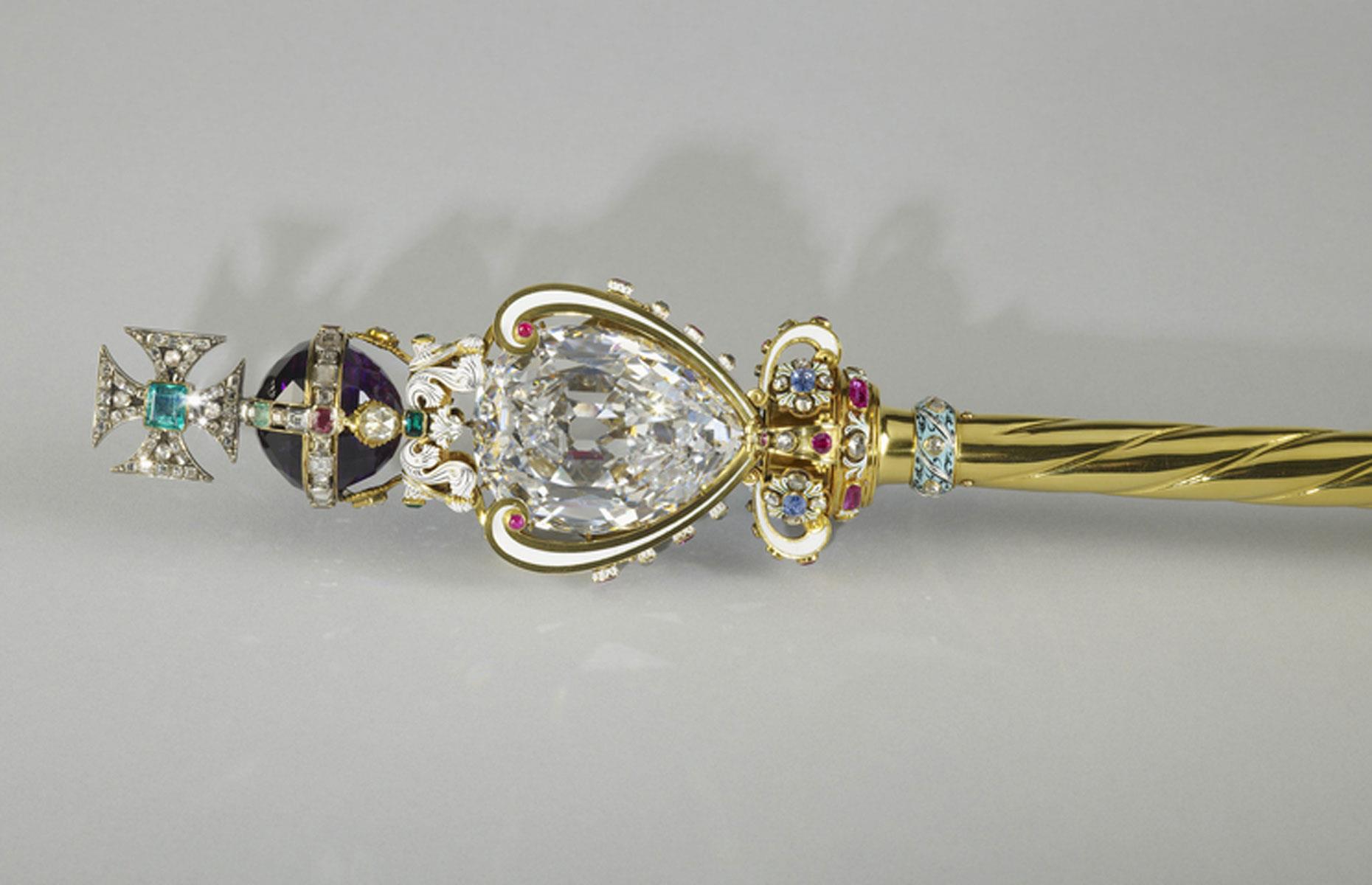 The world's most valuable cut diamond ever sold, the colossal 530.2-carat Cullinan I is considered priceless. However, some experts have estimated that it may be worth over $2 billion (£1.6bn). Cut from the original rough Cullinan stone and set at the top of the Sovereign's Sceptre with Cross, the diamond – also known as the Great Star of Africa – is the most prized item of the English Crown Jewels.

Now take a look at the world's most valuable paintings