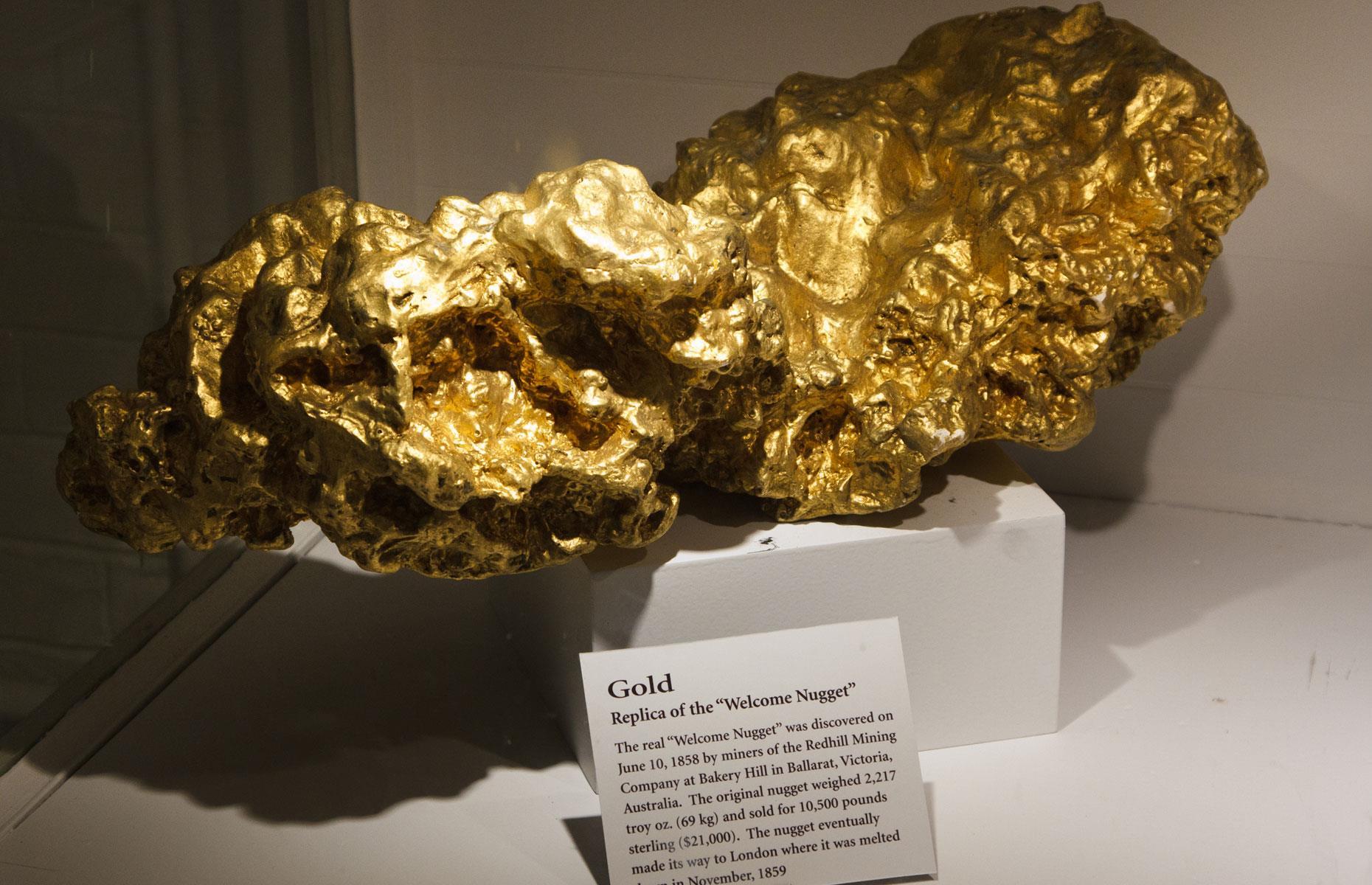 The largest pieces of the precious metal ever discovered

This year marks the 150th anniversary of the discovery of the world's largest gold nugget, a giant lump of the precious metal that was unearthed just over an inch (3cm) below the ground by two English miners in Moliagul, Australia. We take a look at this and dig up the other biggest single gold finds of all time.
Features 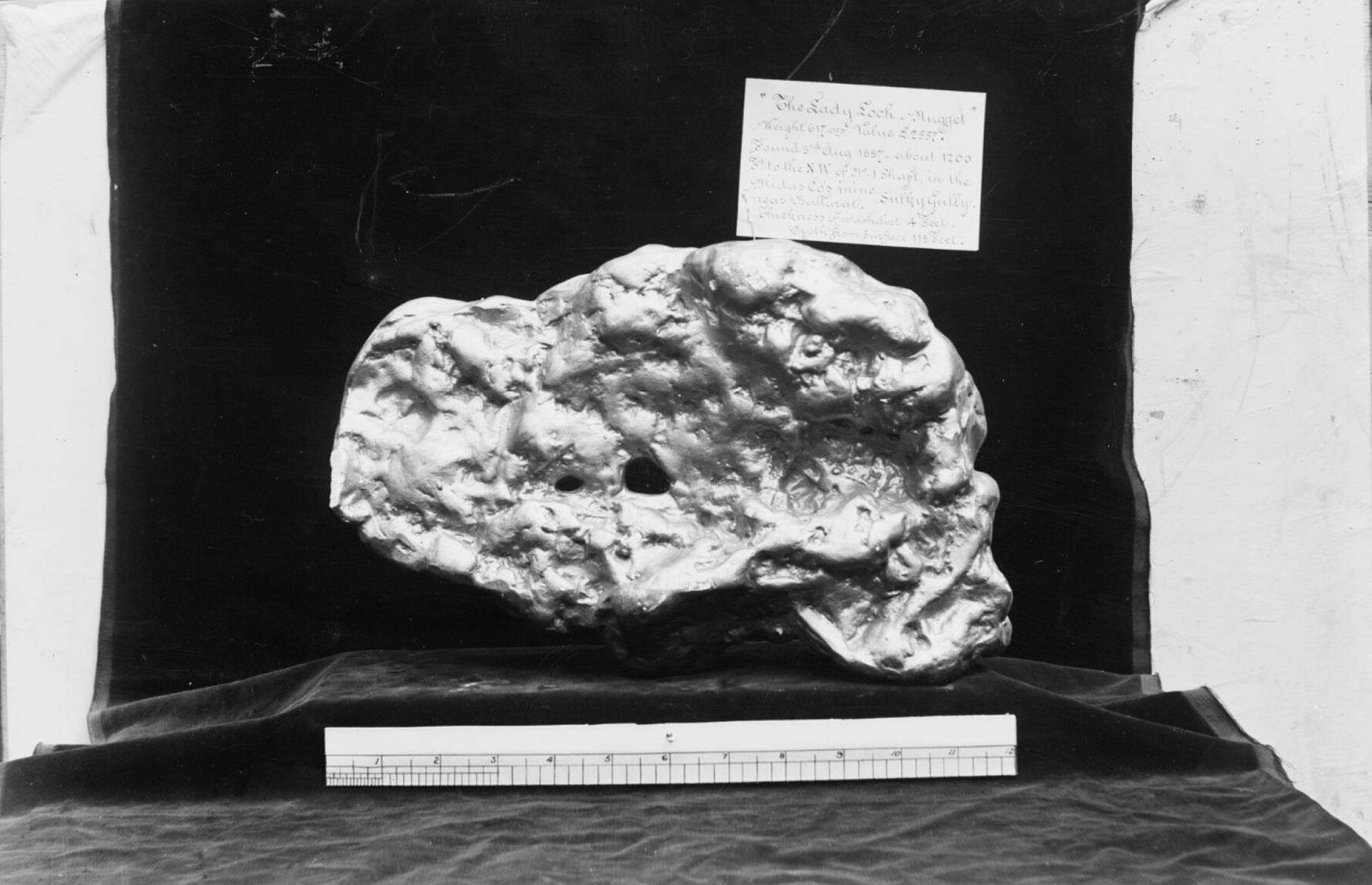 The vast majority of supersized gold nuggets have been discovered in Australia. First up is the Lady Loch. The 617-ounce (17.5kg) beauty was found in August 1887 at Sulky Gully, Ballarat, Victoria by the Midas Mining Company, and named in honour of the then-Governor of Victoria's wife.
Features 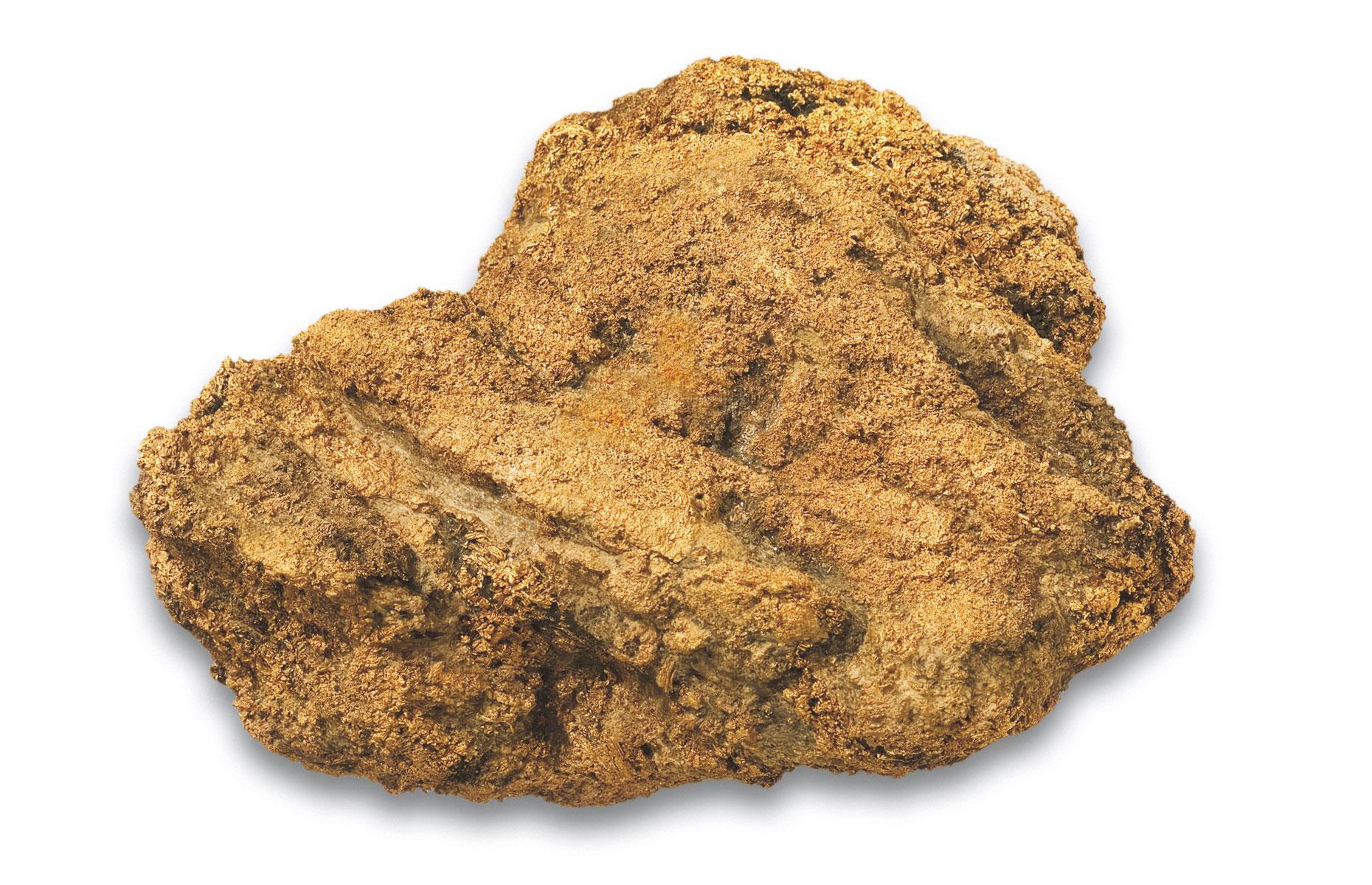 A number of eye-popping nuggets were discovered during Brazil's Serra Pelada Gold Rush in the early 1980s. Notorious for its high levels of crime, the Amazonian gold rush also caused considerable environmental damage. The fifth-biggest nugget found, the Canaã 5 weighs 646 onces (18.3kg), and is on display at the Banco Central Museum in Brasília.
Features 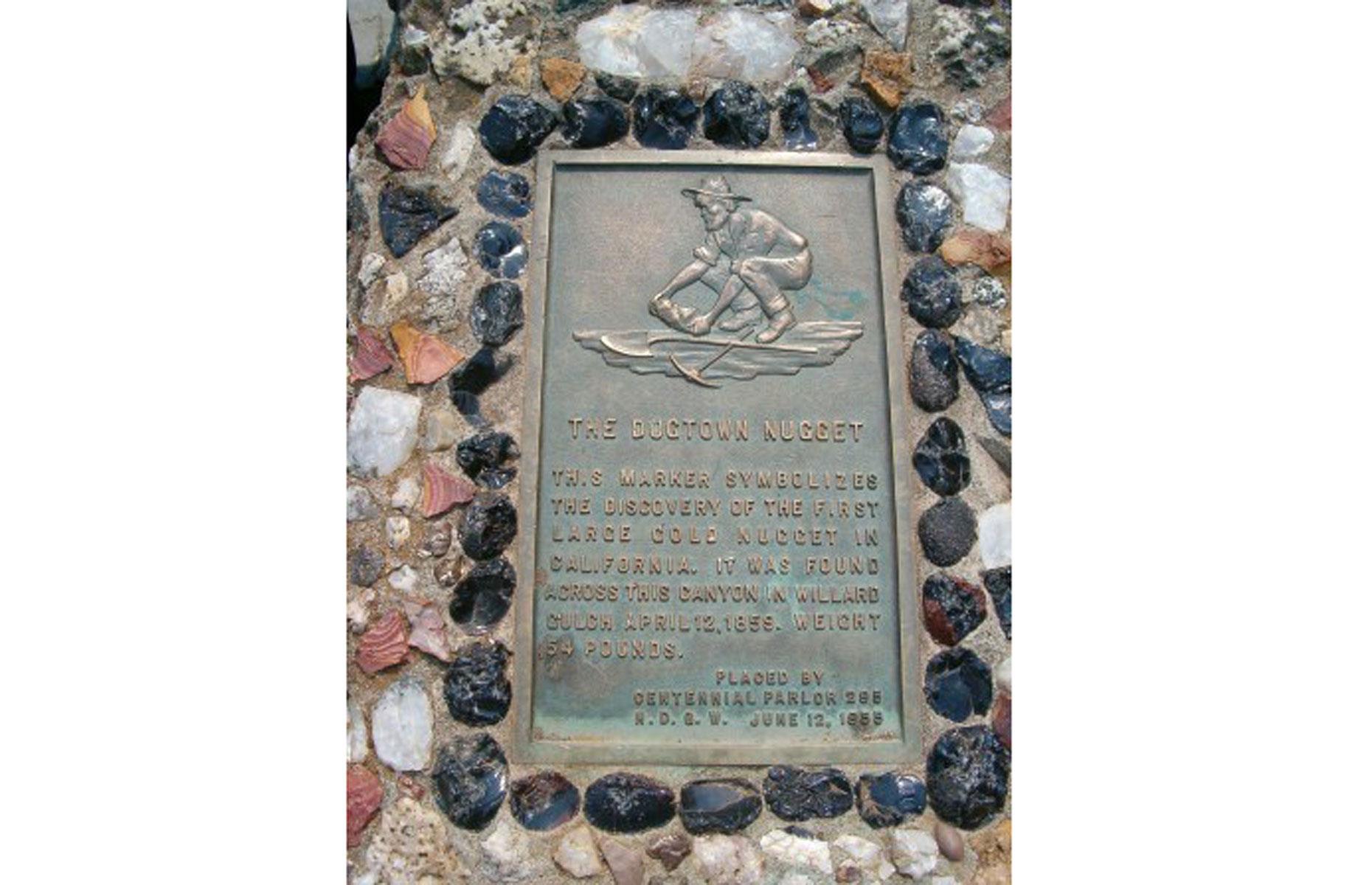 America's third-largest true gold nugget was found at Magalia, California in 1859. Weighing in at a hefty 711 ounces (20.2kg) or 54 troy pounds, the hunk of gold is variously known as the Dogtown, Willard or Magalia nugget. A party was held following its discovery, and the nugget was melted down not long after.
Features 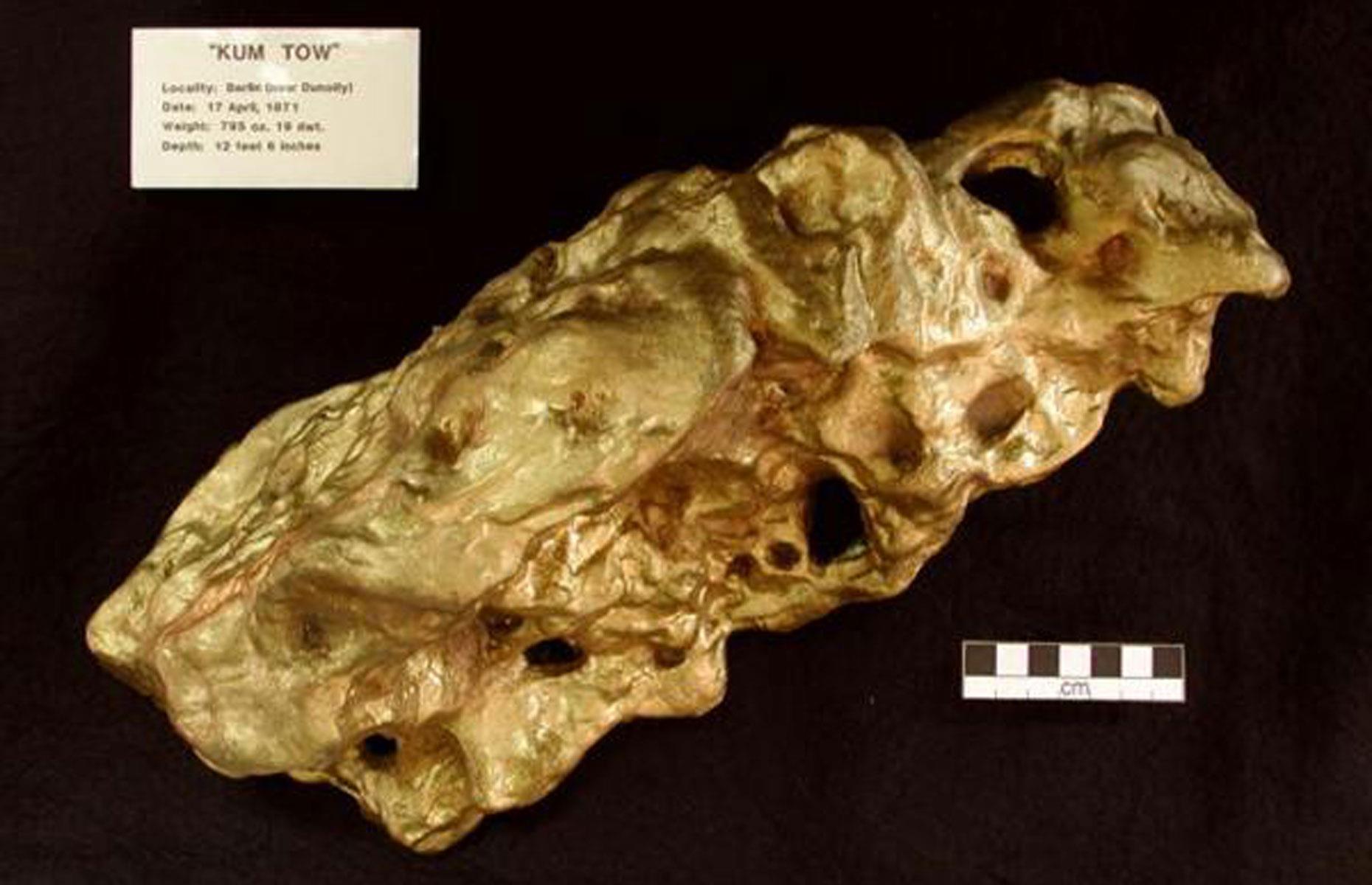 This shiny piece of the precious metal was discovered by Chinese prospector Loo Ching in April 1871 at a depth of just under 13 feet (4m) at Catto’s Paddock, Berlin (now Rheola), Victoria, Australia. The sizeable nugget was melted down but a replica forms part of the Mineralogy Collections at Museum Victoria.
Features 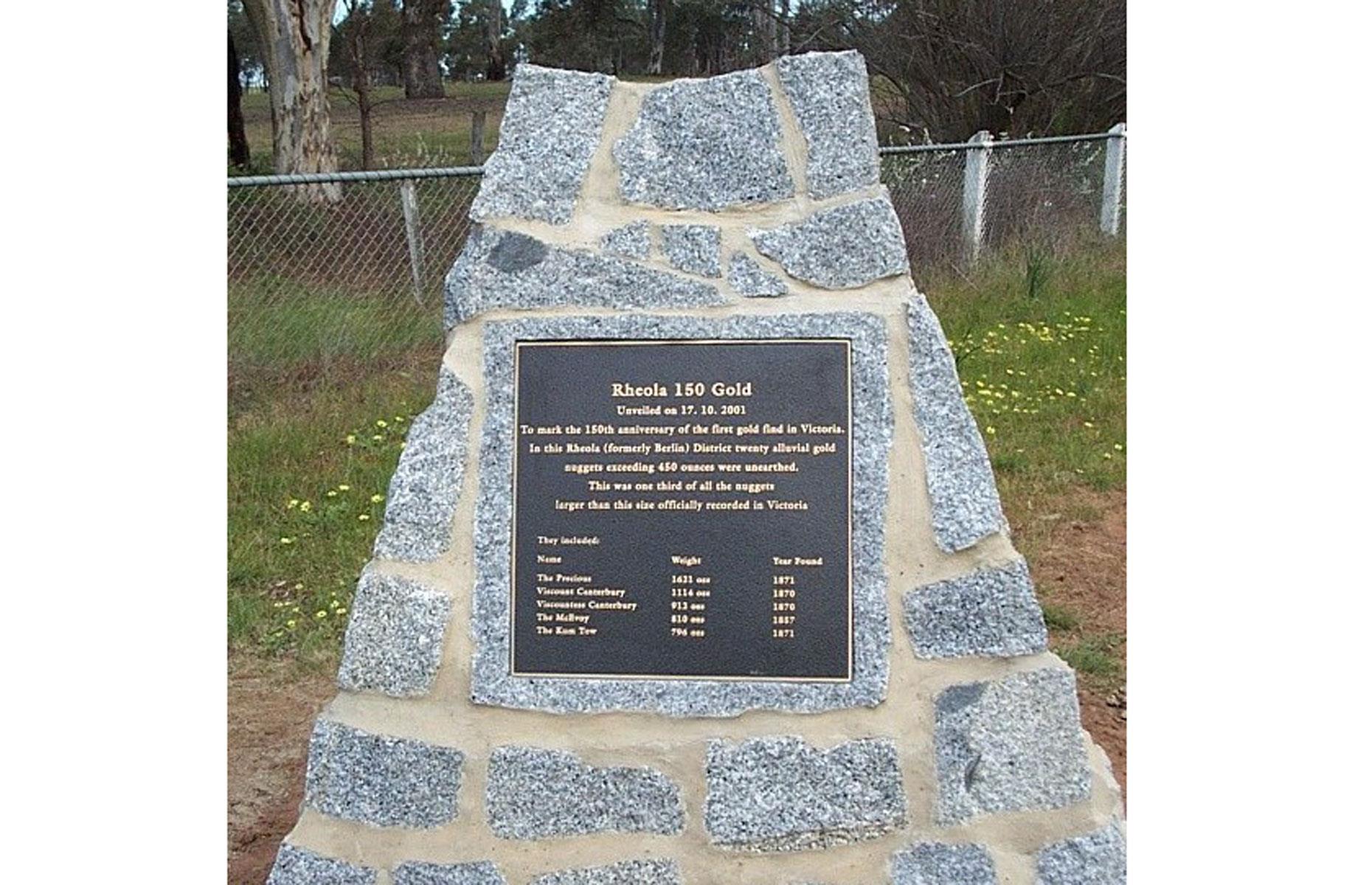 Discovered in either 1857 or 1858 by Nicholas McAvoy and Walter Palmer, the McEvoy (which is curiously spelled with an 'E' rather than an 'A') Nuggets were, like the Kow Tow Nugget, unearthed in the gold-rich Rheola locality in Victoria. No longer in existence, they weighed 810 ounces (22.9 kg), 805 ounces (22.8kg) and 782 ounces (22.2kg) respectively.
Features 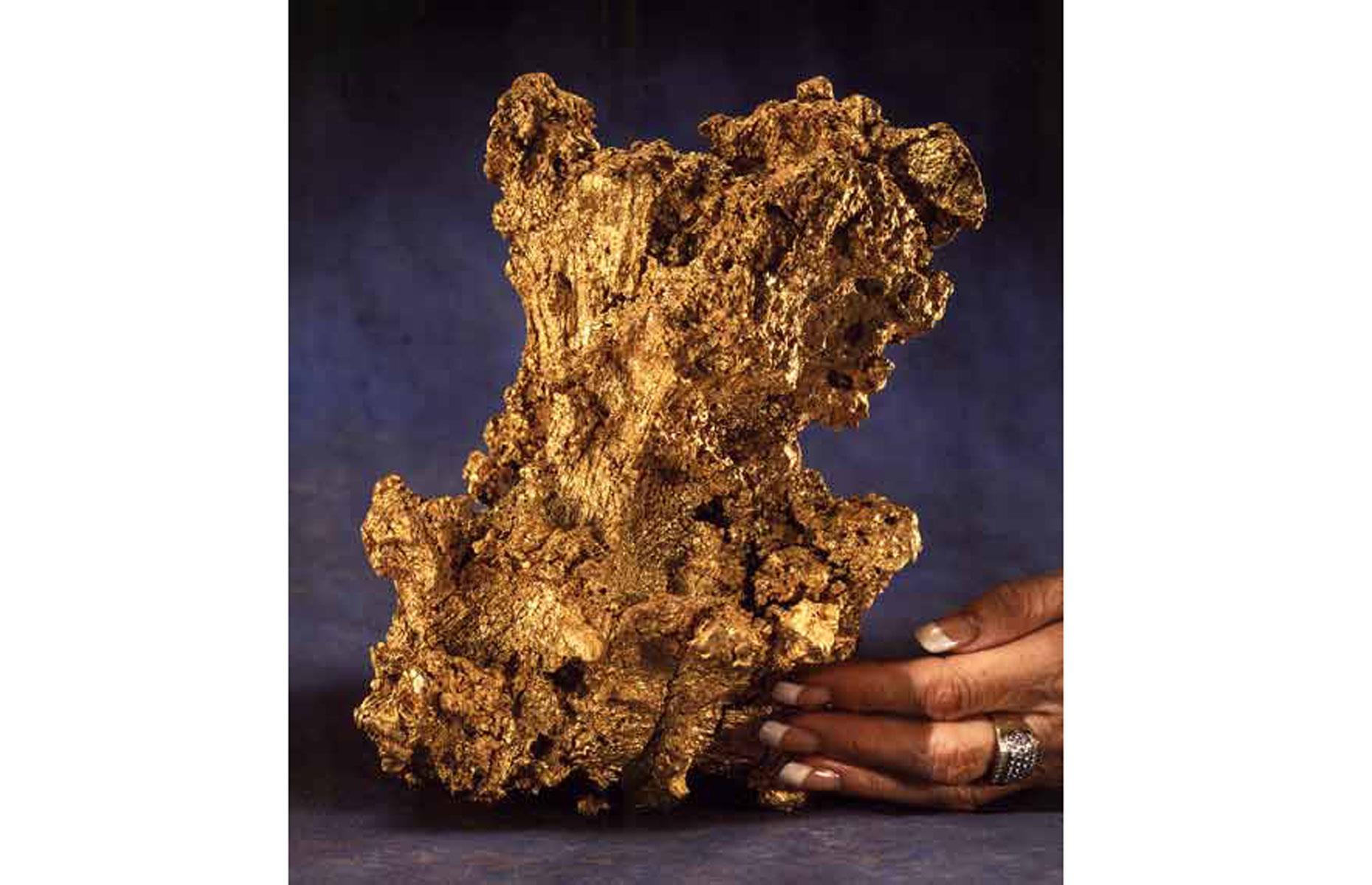 A far more recent discovery, the stunning Normandy Nugget was found in a dry creek bed in Kalgoorlie, Western Australia in 1995. The property of the Newmont Mining Corporation, the sparkling hunk of gold, which weighs 899 ounces (25.5kg), is currently on display at the Perth Mint.
Features 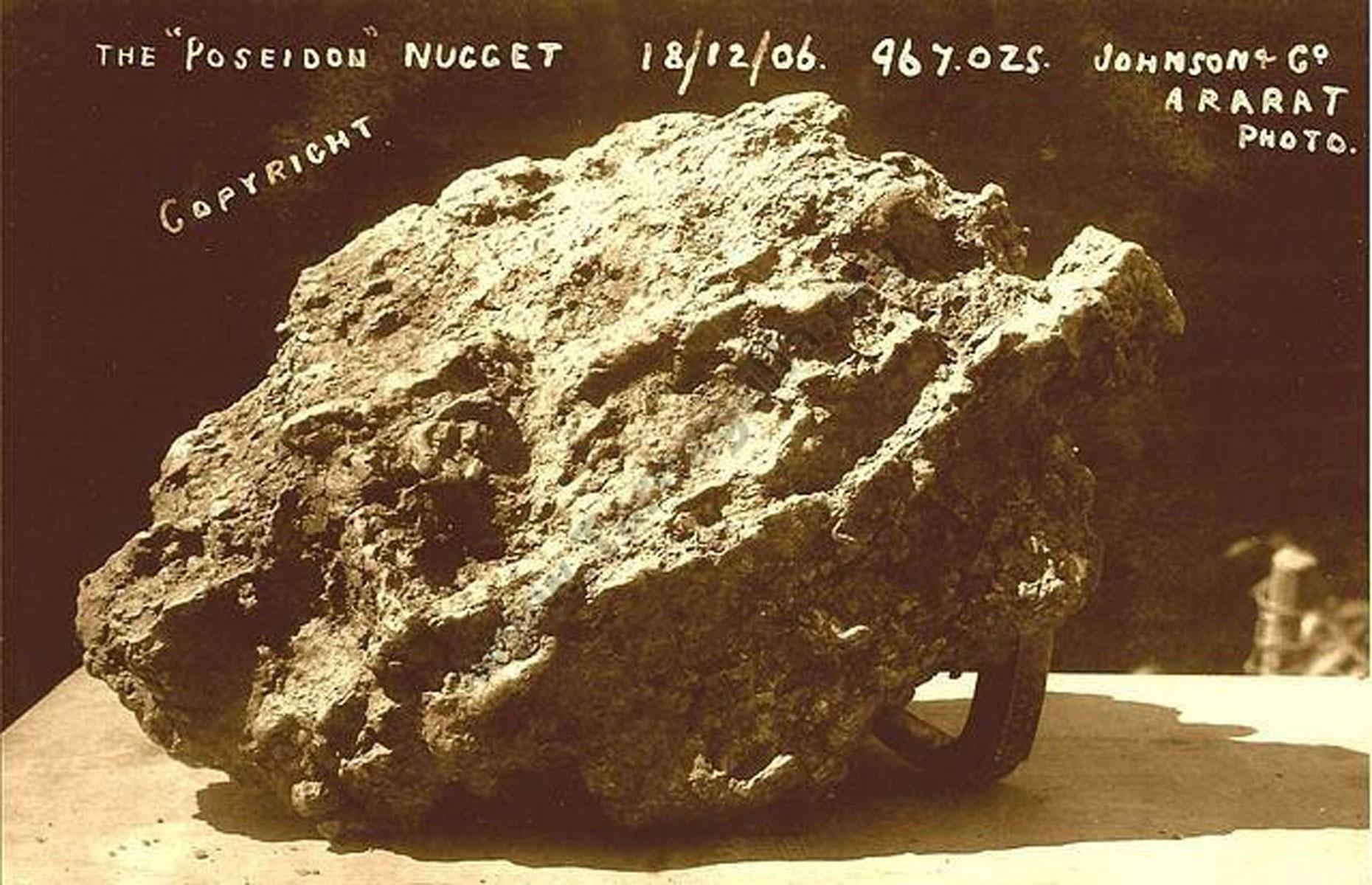 Staying in Australia, the Poseidon Nugget was found at the eponymous goldfield in the mining town of Tarnagulla, Victoria in December 1906. Weighing a total of 953 ounces (27kg), according to contemporary news reports (the weight on the image is incorrect), the find, just before Christmas, inspired a festive gold rush.
Features 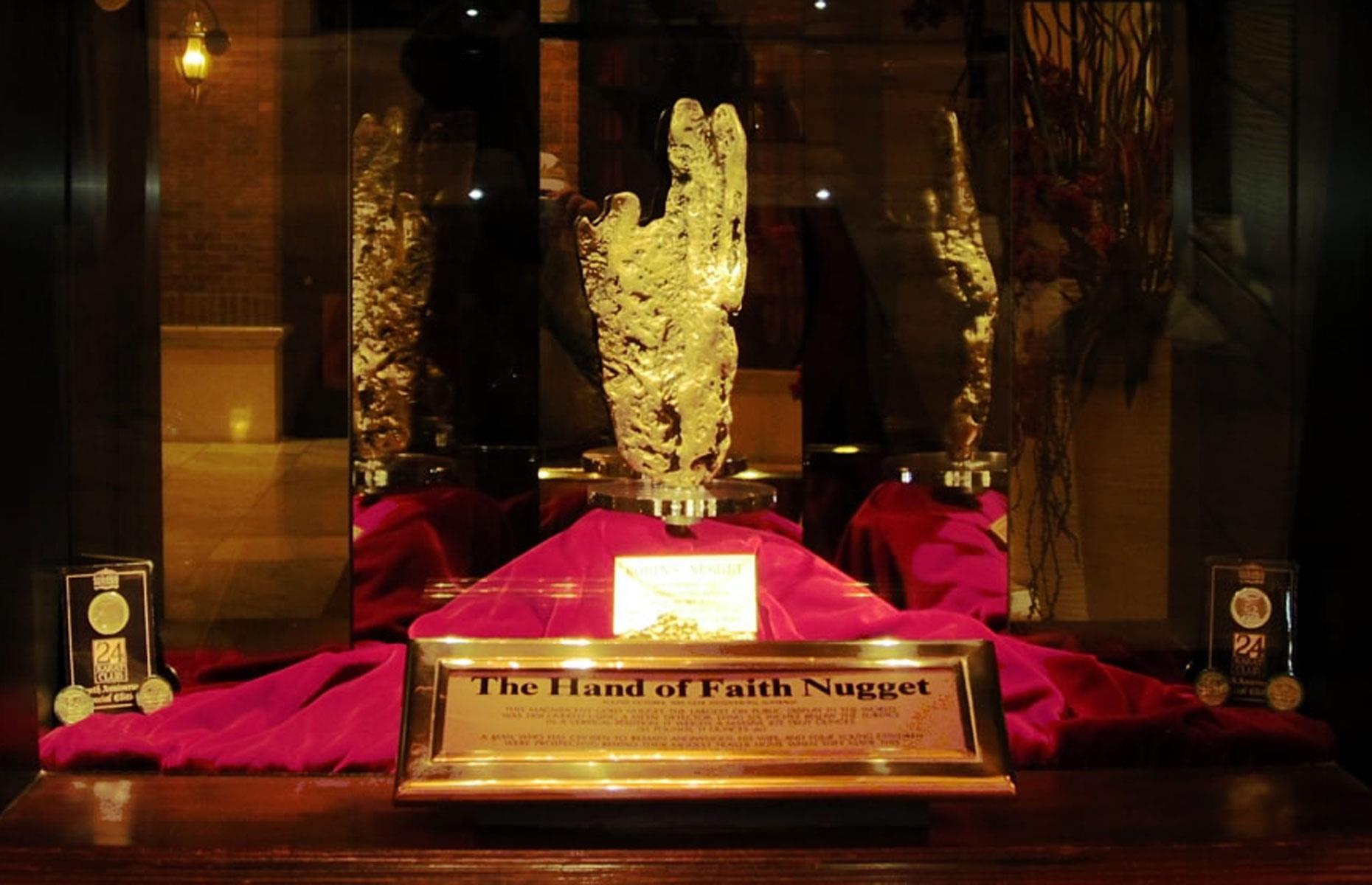 The spectacular Hand of Faith Nugget is the largest discovered using a metal detector. On display at the Golden Nugget Casino Hotel in Lake Charles, Louisiana, USA, the dazzling rock was found by Kevin Hillier near Kingower in Victoria, Australia in September 1980, a mere 12 inches (30cm) below the ground. It was reportedly sold at the time for over $1 million, which is $3.1 million (£2.4m) in today's money.
Features 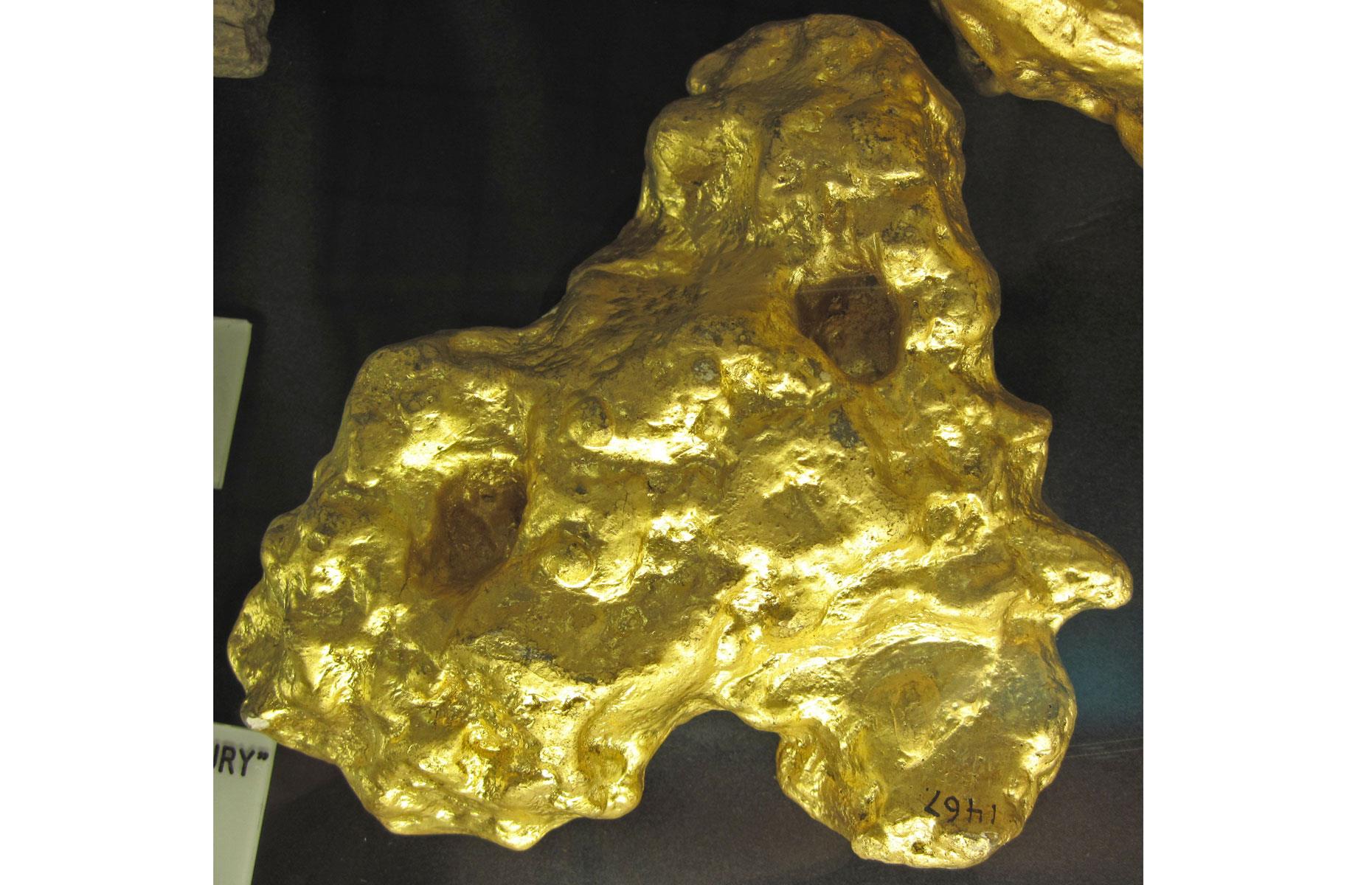 Another splendid nugget that was discovered in the gold-rich Rheola locality in Victoria, Australia, the Viscountess Canterbury was found at John's Paddock, Berlin in October 1870. Weighing in at 970 ounces (27.5 kilos), the nugget was named after the wife of the then-Governor of Victoria John Manners-Sutton, 3rd Viscount Canterbury. The image shows a replica of the nugget.
Features 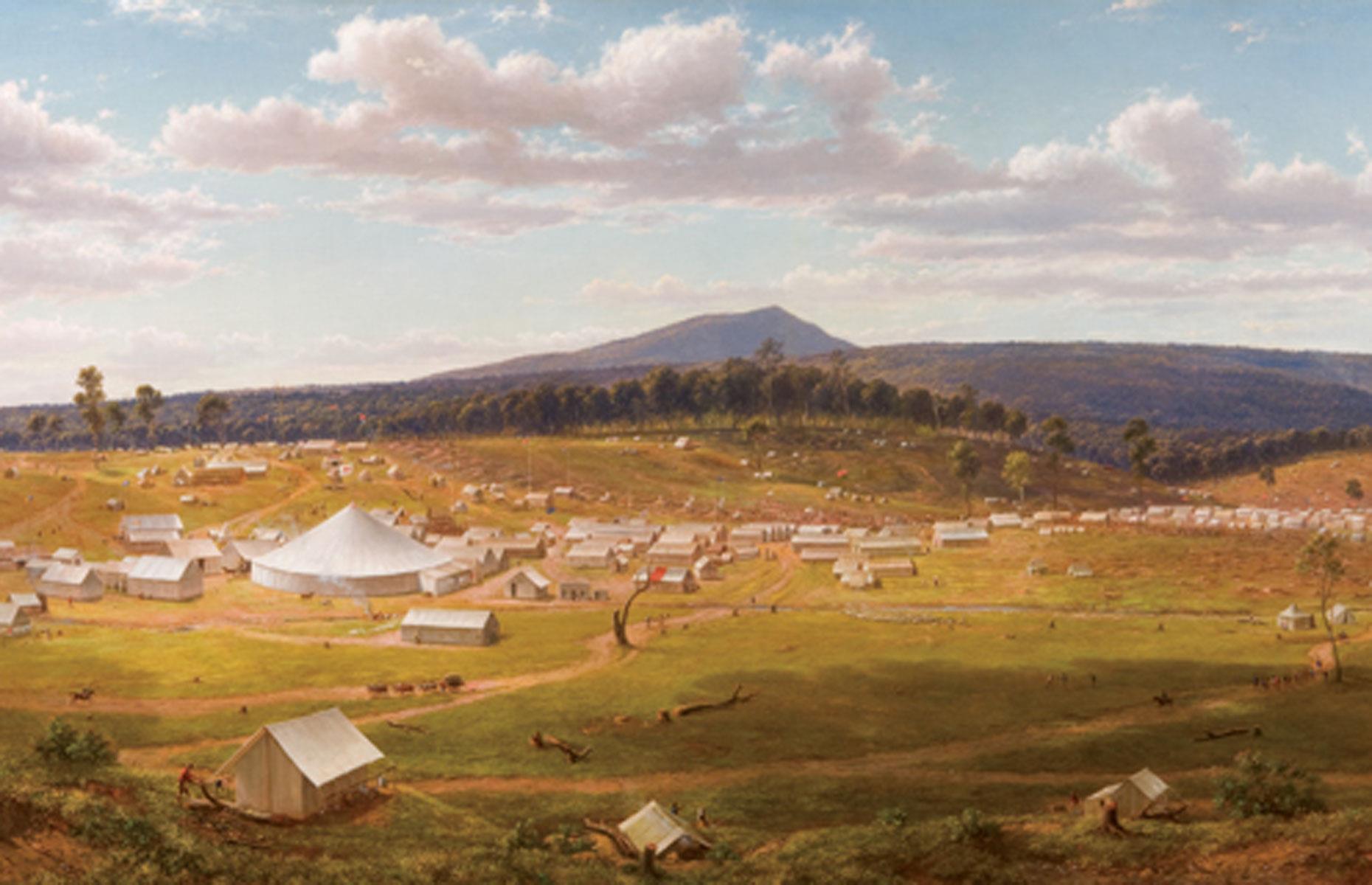 One of the largest nuggets discovered during Australia's Victorian Gold Rush, which established 'Marvellous' Melbourne as the country's second city, the 1,099-ounce (31.2kg) Canadian 3 was found in January 1863 at Canadian Gully, Ballarat. This painting depicts the tent city that sprung up in the area during the rush.
Features 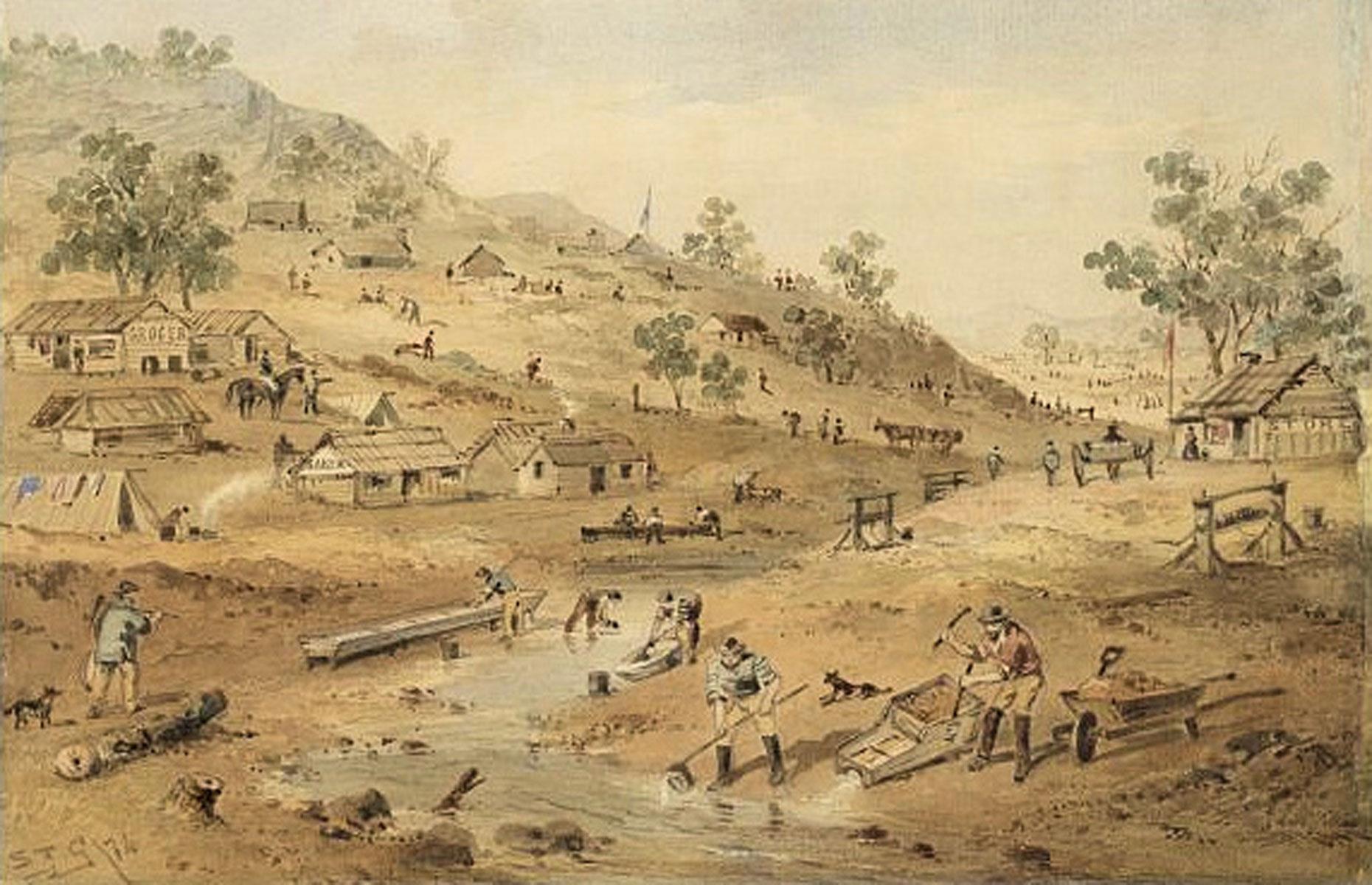 Named after a popular gold commissioner rather than the aquatic bird, the Heron Nugget was found near Old Golden Point in Fryer's Creek at the Mount Alexander goldfield (pictured) in March 1855 during the Victorian Gold Rush. Weighing in at 1,106 ounces (31.4kg), the nugget was sold in England not long after its discovery for £4,080, around $558,000 (£432k) in today's money.
Features 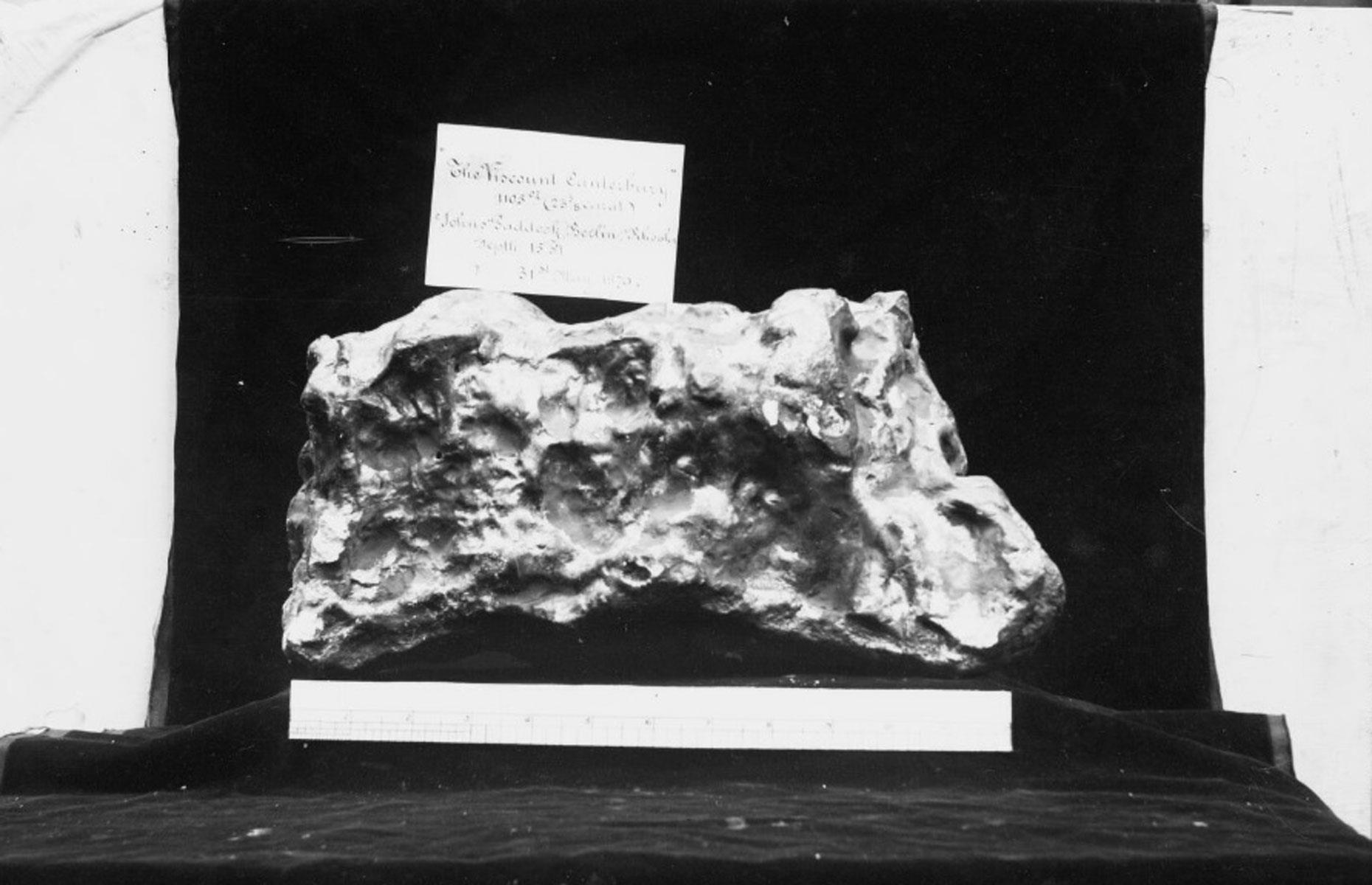 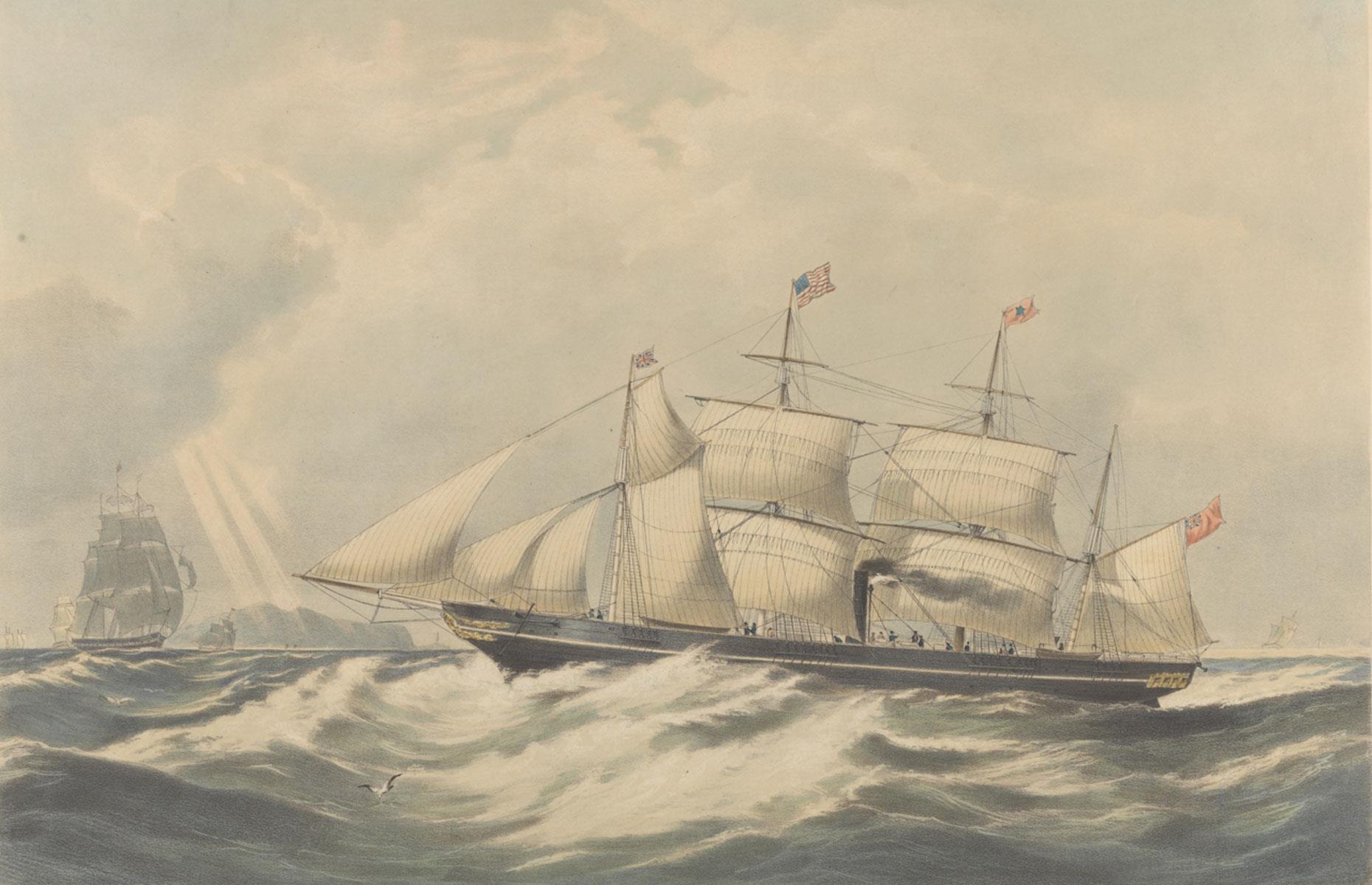 Named after the famous ship, the Sarah Sands Nugget is another famous discovery that was found at Canadian Gully, Ballarat during the Victorian Gold Rush. It was unearthed by a French sailor in January 1853 and valued at £5,332, which works out at around $859,000 (£665k) today.
Features

The Golden Eagle Nugget, so-named on account of its resemblance to the majestic bird, was discovered by 17-year-old Jim Larcombe at Larkinsville, Western Australia in January 1931. The 1,135-ounce (32.2kg) find was a headline-grabbing national sensation, making front-page news Down Under. The nugget was eventually sold to the Western Australia Government for several thousand Aussie dollars.
Features 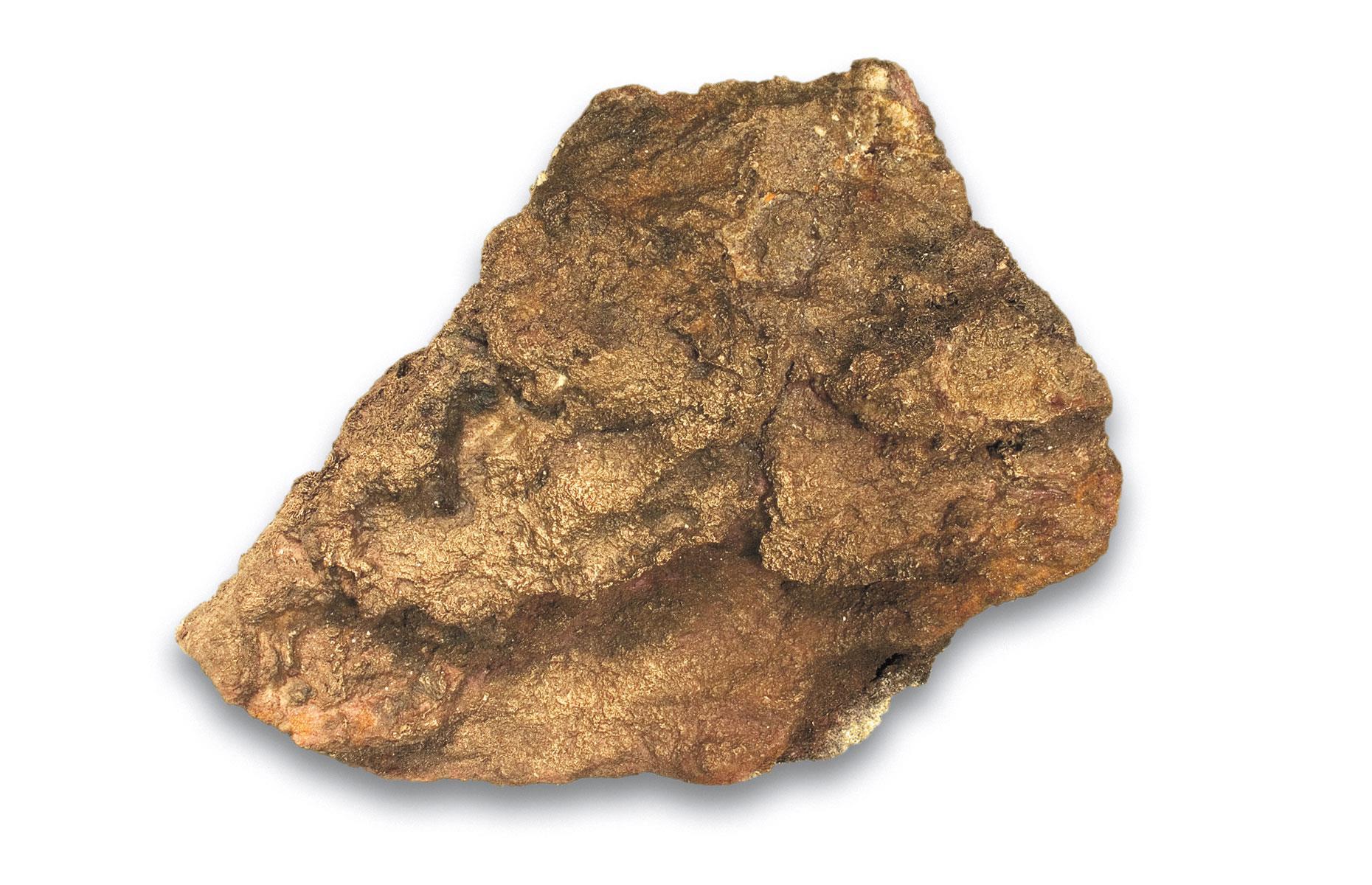 The fourth-largest nugget discovered during Brazil's infamous Serra Pelada Gold Rush of the early 1980s, the Canaã 4 Nugget weighs 1,185 ounces (33.6kg) and is valued at a cool $1.4 million (£1.1m). Like the other major nugget finds of the gold rush, it resides at the Banco Central Museum in Brasília.
Features 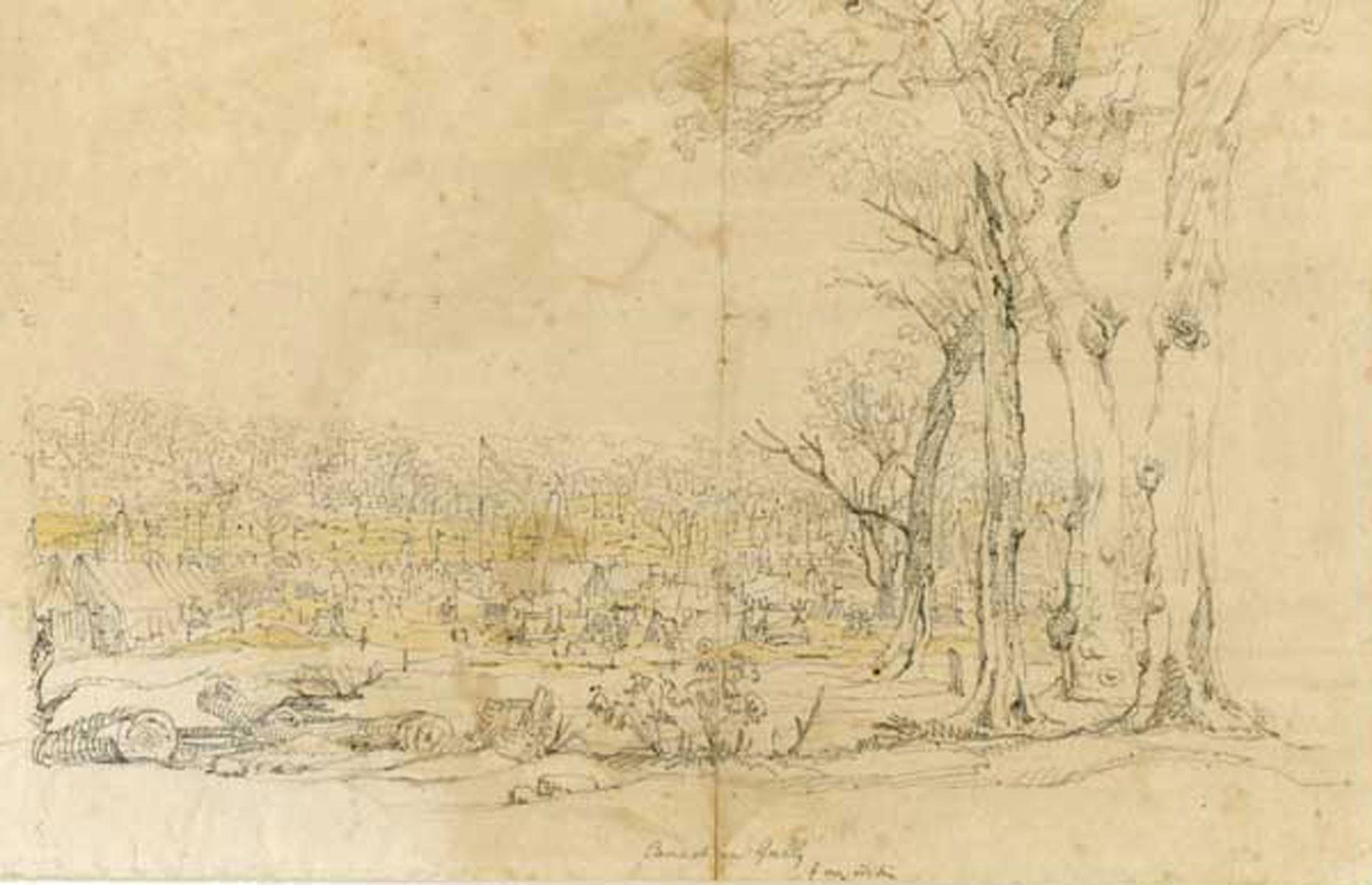 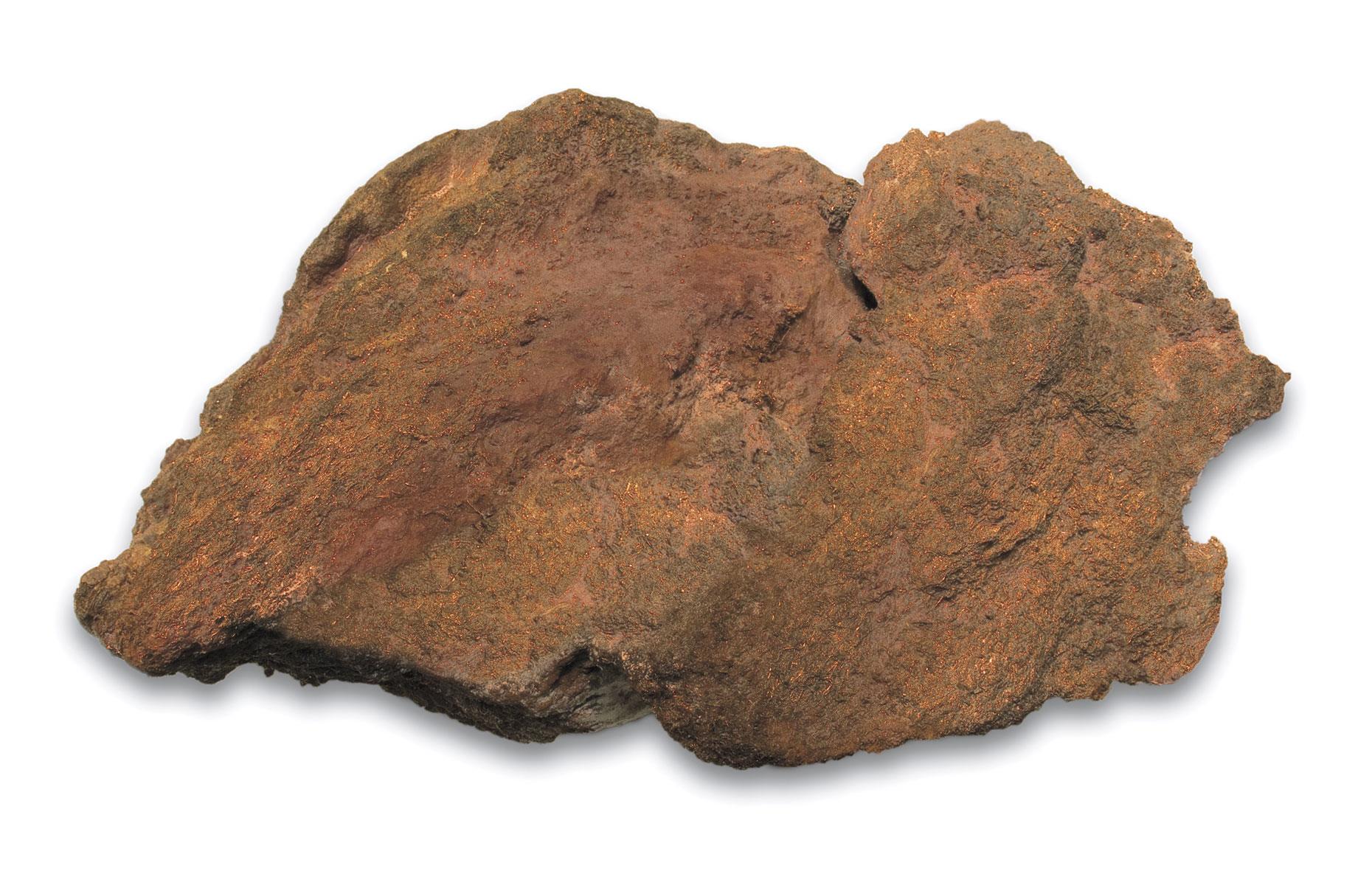 Notable for its distinctive ferrous red hue, the Canaã 3 Nugget is the third-largest nugget unearthed during the Brazilian Serra Pelada Gold Rush of the early 1980s. Valued at around $1.5 million (£1.2m), the rock, which weighs 1,230 ounces (34.9kg), is on display in all its crimson glory at the Banco Central Museum in Brasília.
Features 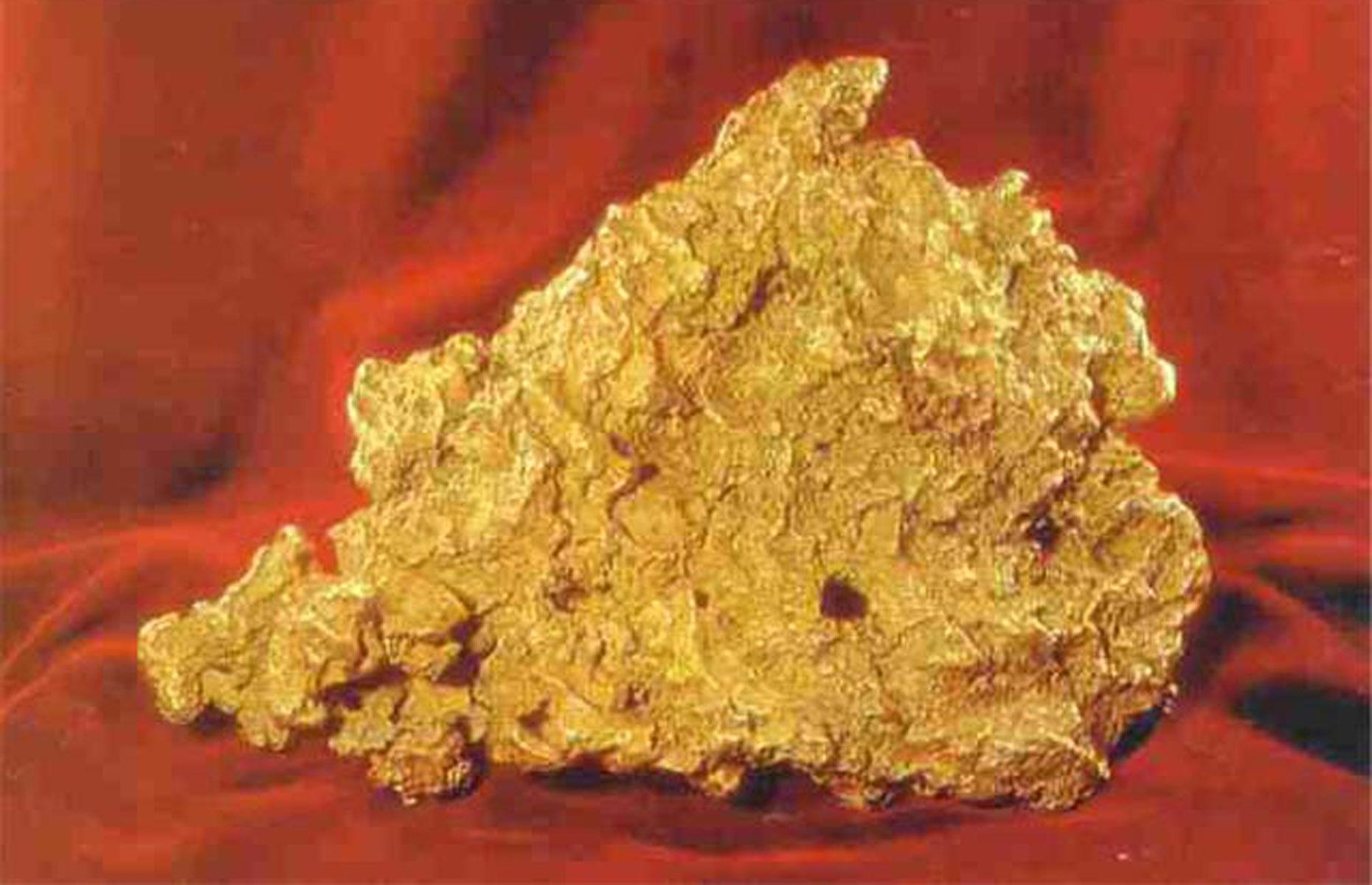 The Great Triangle Nugget is the largest discovered in Russia. Mined by prospector Nikofor Syutkin at Miass in the Ural Mountains sometime during 1842, the exquisite lump of gold weighs in at 1,277 ounces (36.2kg). It is on display at the Kremlin Armoury in Moscow as part of the Diamond Fund.
Features 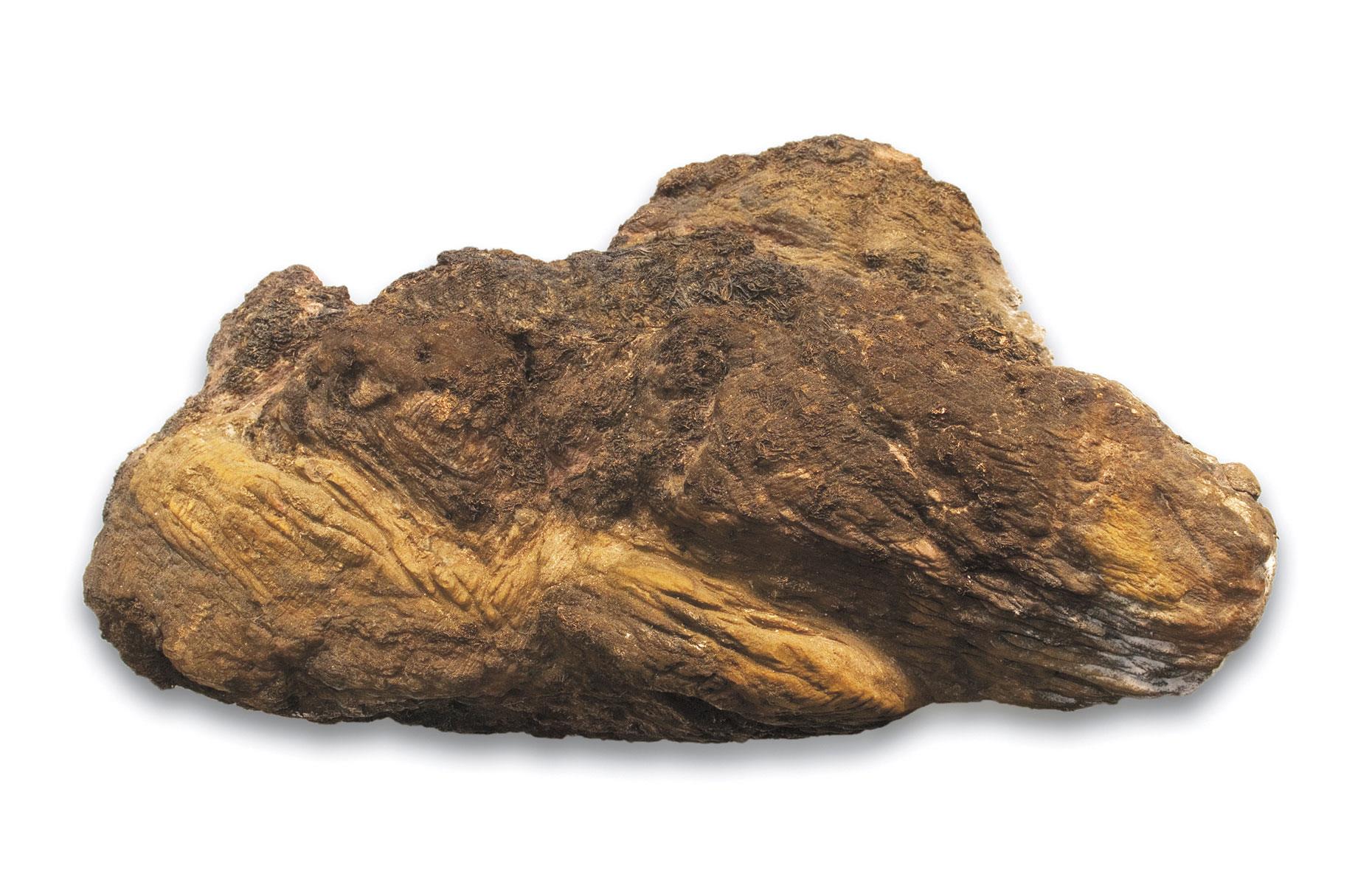 The second-biggest nugget found during Brazil's Serra Pelada Gold Rush of the early 1980s, the Canaã 2 has a weight of 1,430 ounces (40.5kg). As is the case with the other significant nuggets discovered during the gold rush, it is available to view at the Banco Central Museum in Brasília.
Features 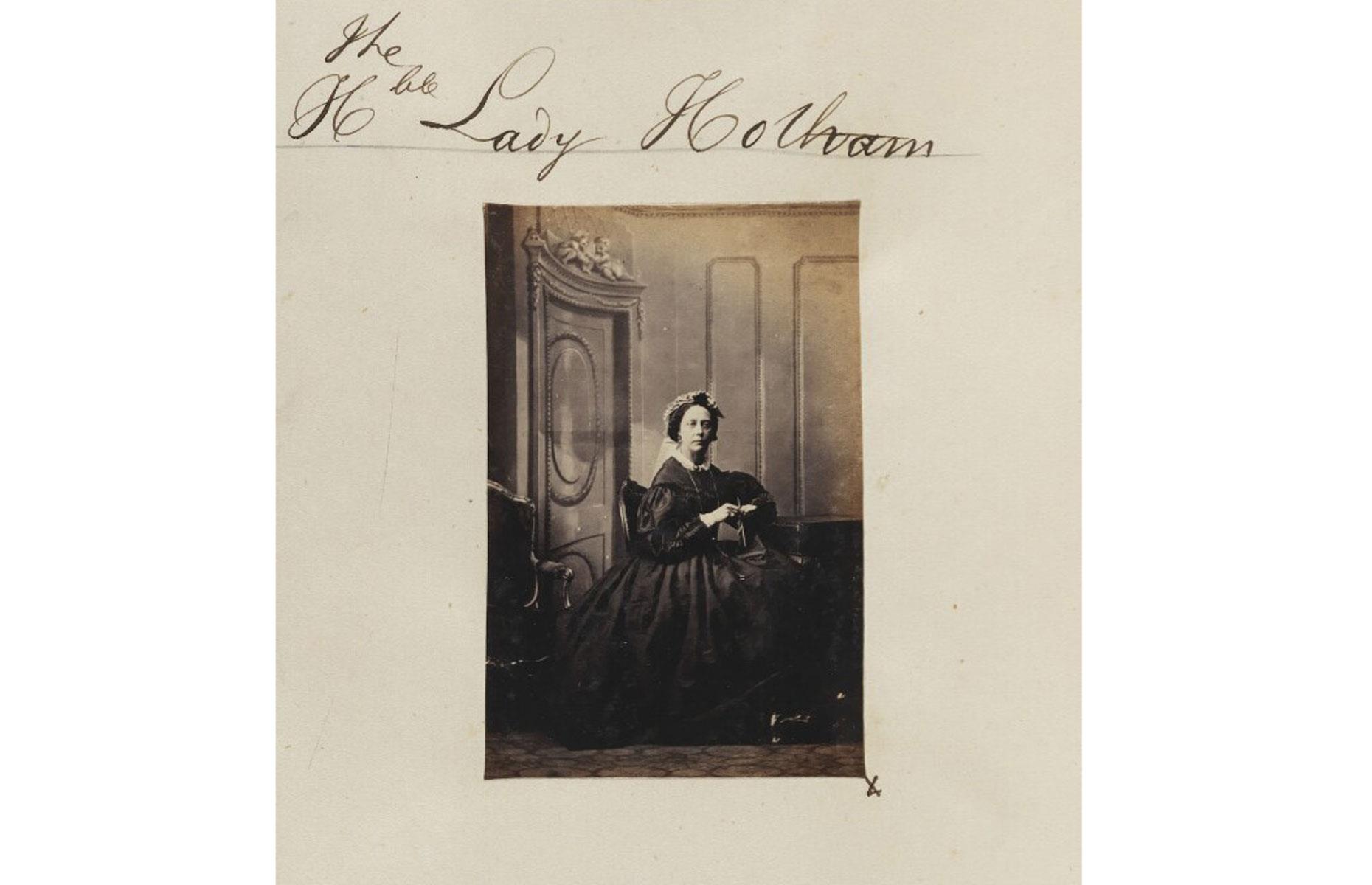 Named in honour of the wife of Sir Charles Hotham, then-Governor of Victoria, the Lady Hotham Nugget was found by a group of nine miners at the gold-packed Canadian Gully in Ballarat in September 1854 during the Victorian Gold Rush. It weighed in at 1,576 ounces (44.7kg) and was valued at £13,000, a substantial $1.8 million (£1.8m) in today's money.
Features 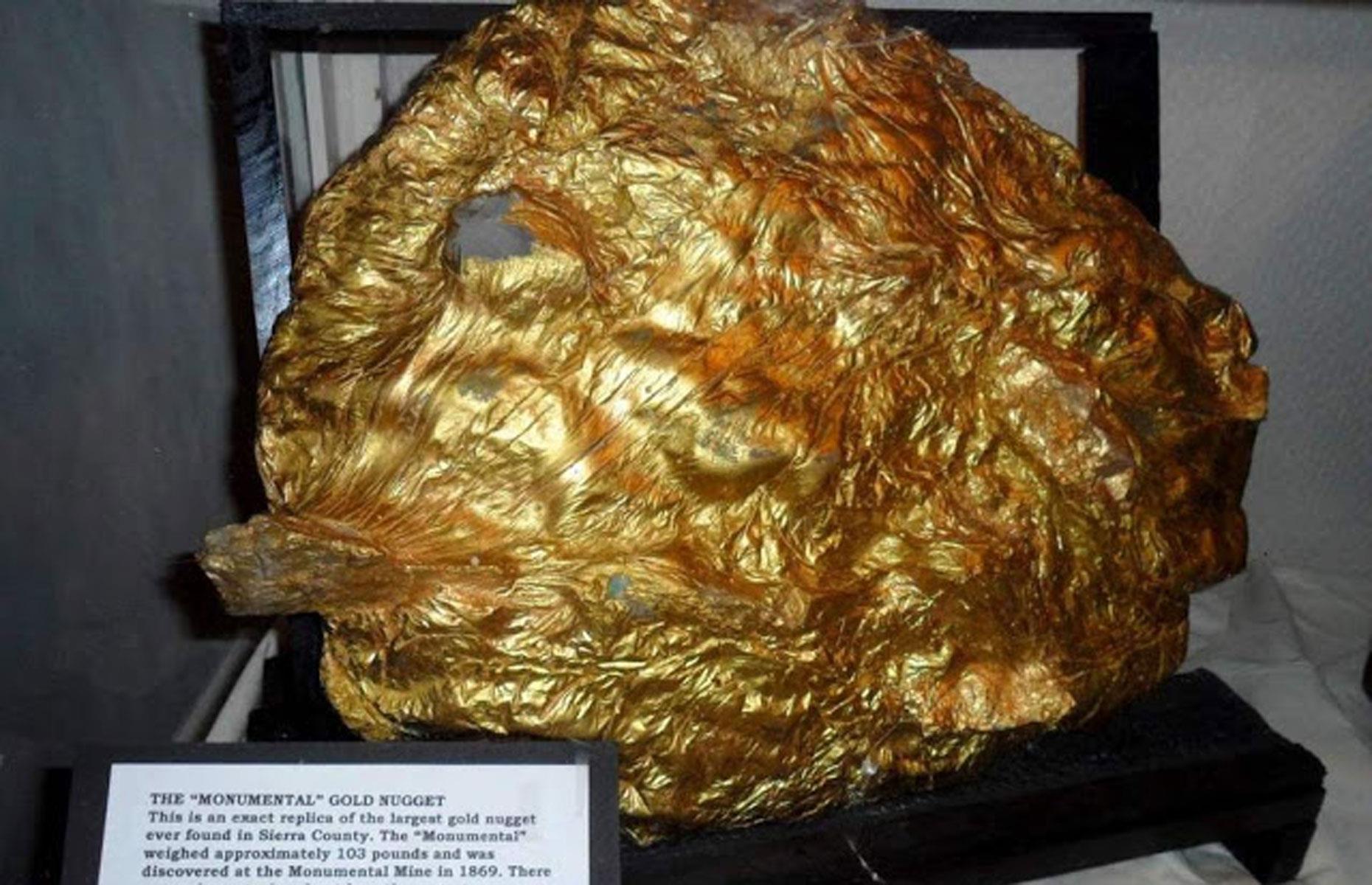 The largest gold nugget discovered in America was suitably named the Monumental. Weighing in at between 1,648 (46.7kg) and 1,696 ounces (48.1kg), it was discovered by five prospectors in August 1869 in the Monumental Claim in Sierra County, California. The find was sold to wealthy San Francisco hotel owner Robert B. Woodward not long after for a bargain $13,000, around $240,000 (£185k) in today's money.
Features 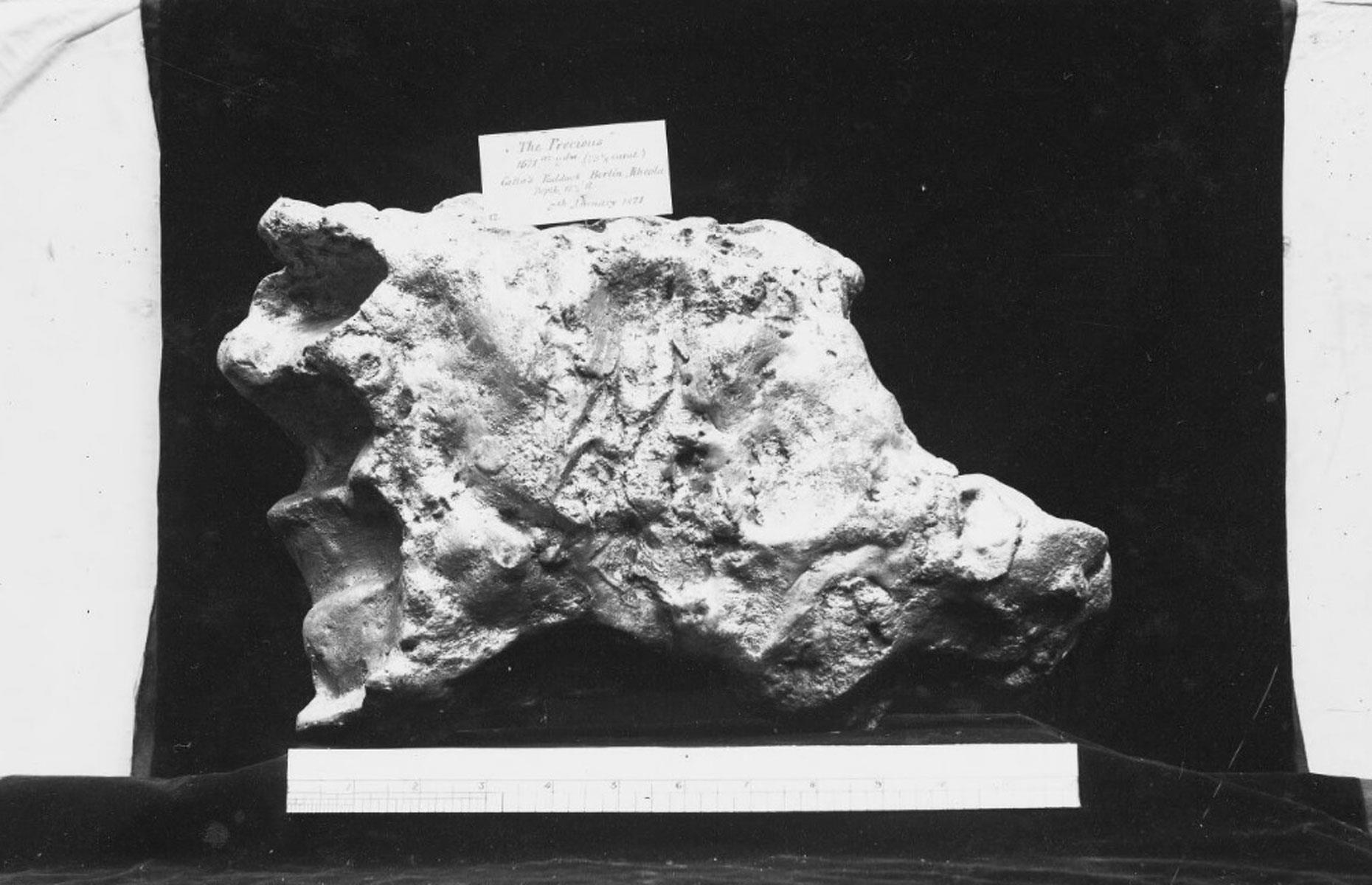 Like the Kum Tow Nugget, the so-called Precious Nugget was found at Catto’s Paddock, Berlin (now Rheola), Victoria, Australia, and it was also discovered by a Chinese prospector. Unearthed in January 1871, the nugget was valued at £6,868, which works out at $1 million (£795k) today. It was named after landowner Precious C. Williams.
Features 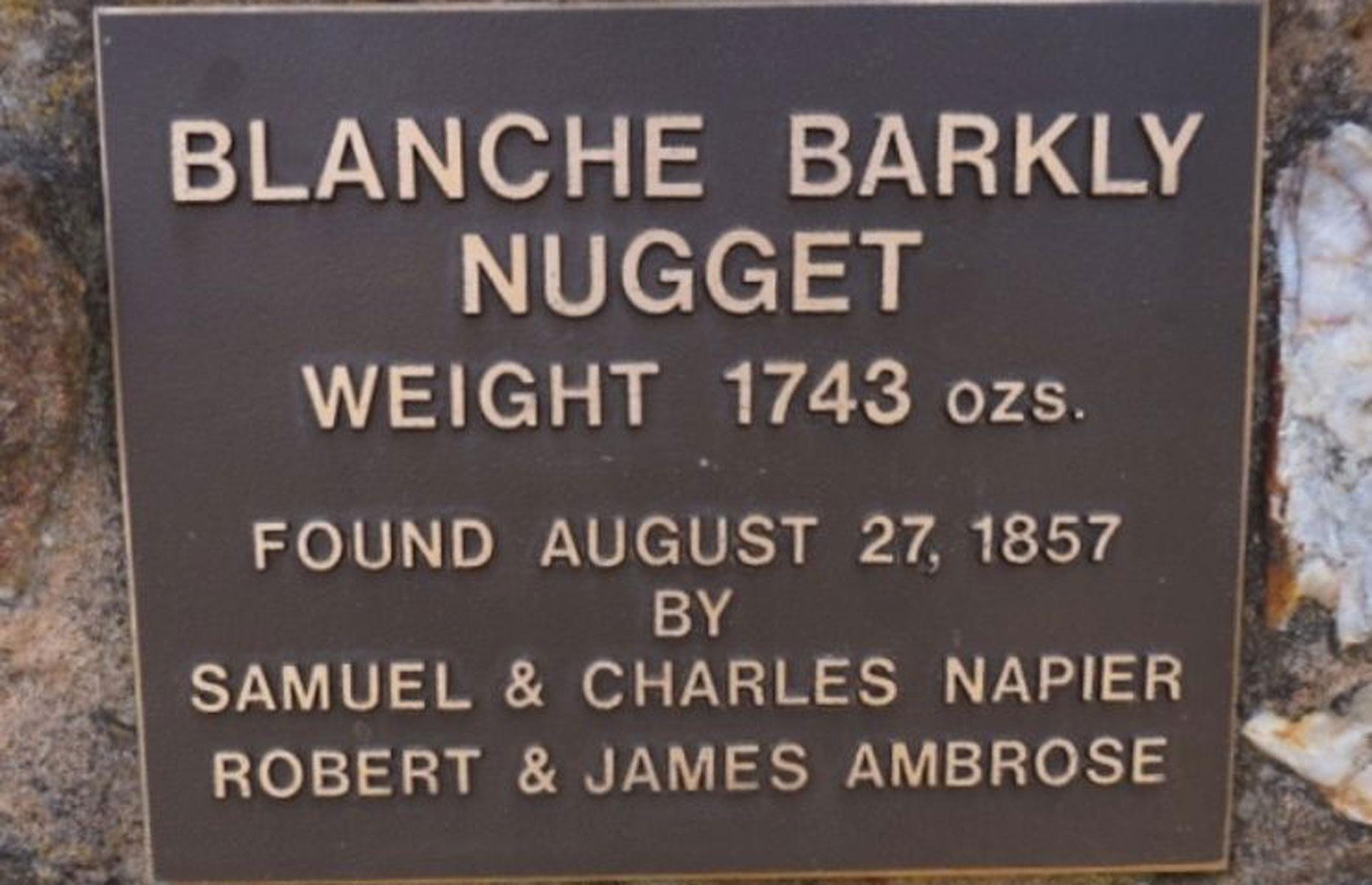 The Blanche Barkly was found by a team led by Scottish prospector Sam Napier in August 1857 at Kingower, Victoria. Named in honour of the daughter of the then-colonial Governor, it was shipped to London and displayed at the Crystal Palace. The nugget was later sold to the Bank of England for £12,000, which is $1.7 million (£1.3m) in today's money, and melted down to make 1,000 sovereign coins.
Features 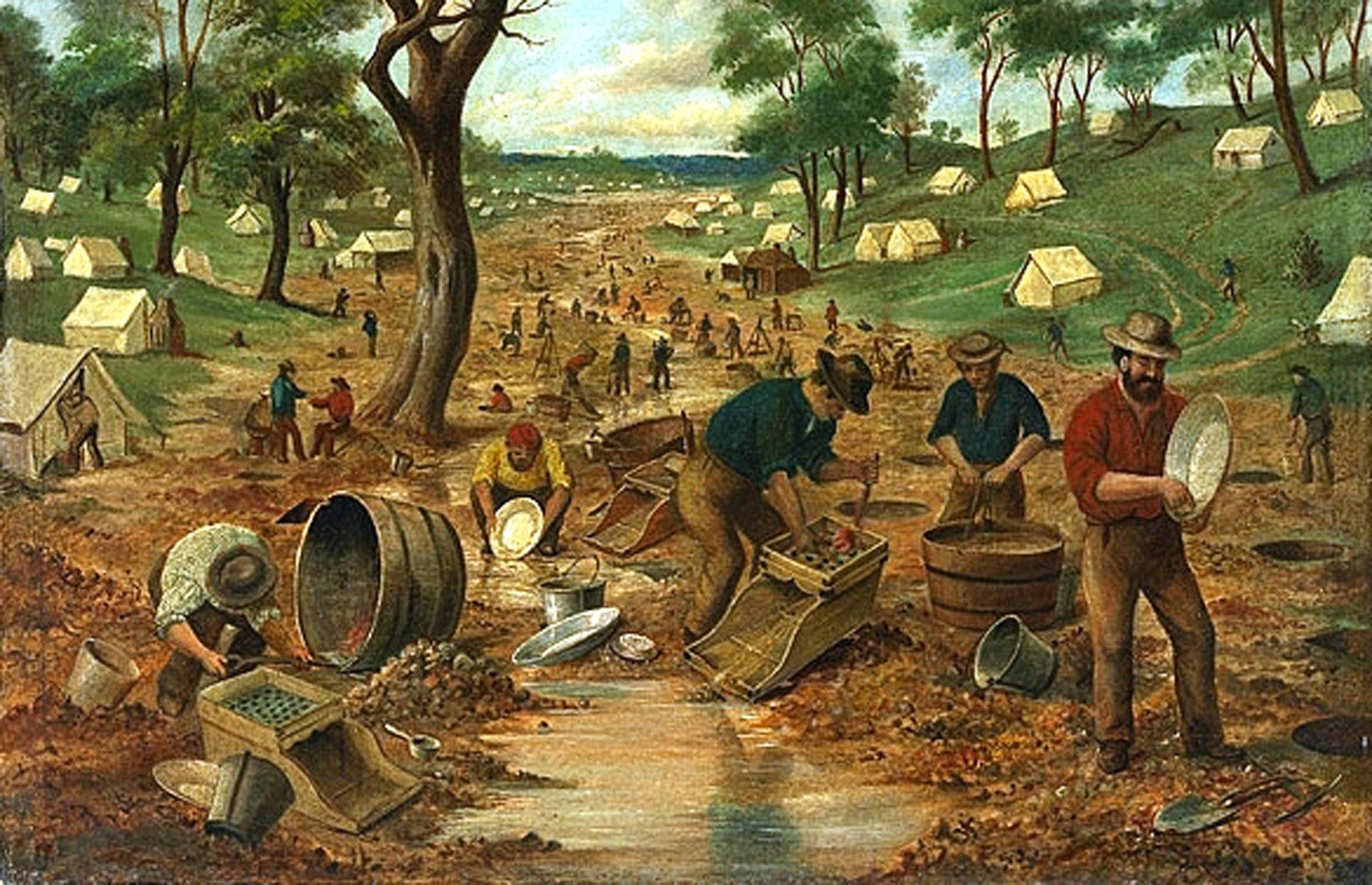 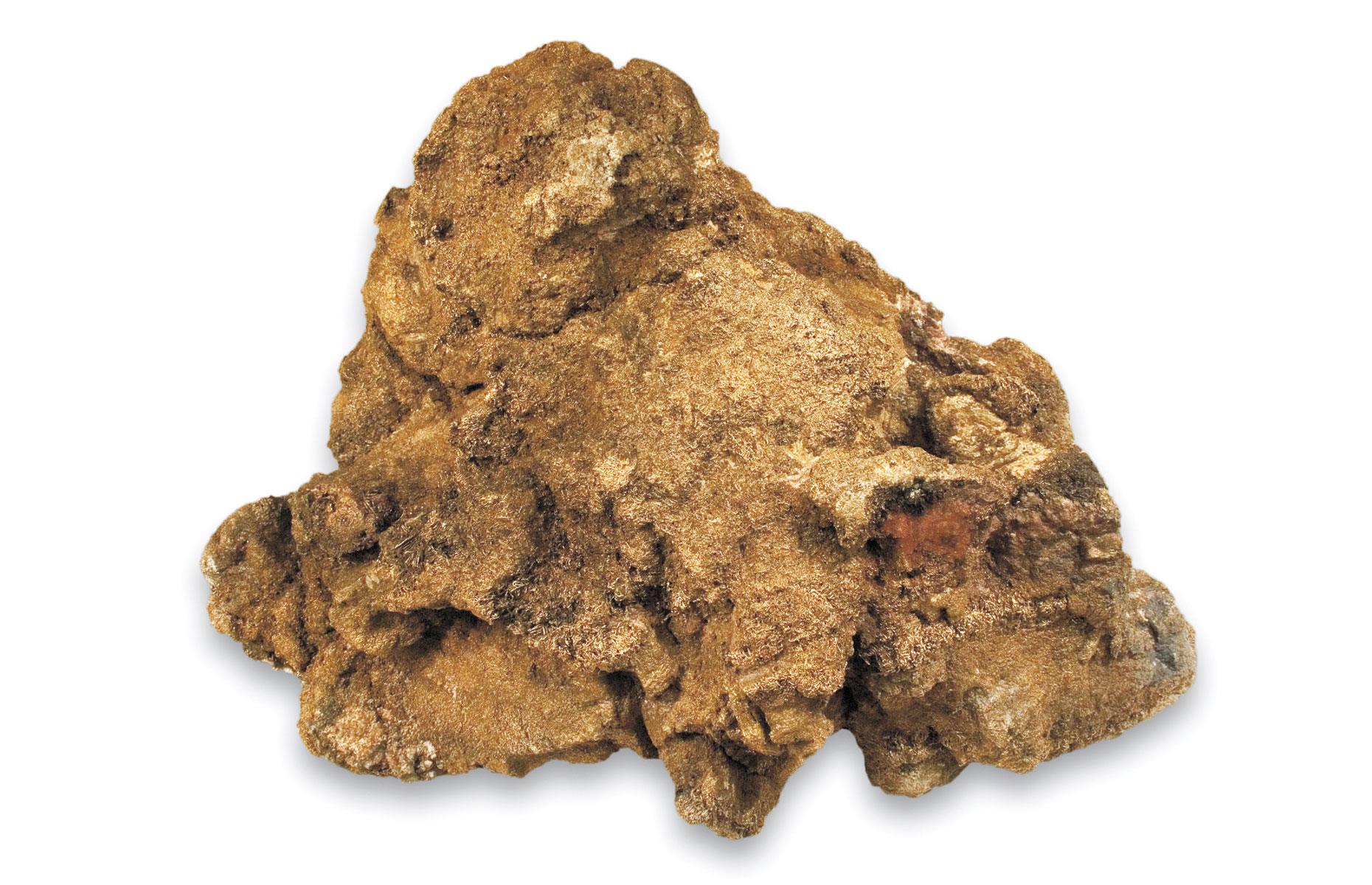 The largest surviving true gold nugget on the planet, the Canaã is the biggest lump of gold extracted during Brazil's Serra Pelada Gold Rush in the early 1980s. Valued at $2.6 million (£2m), it is on display to the general public at the Banco Central Museum in Brasília, along with its smaller counterparts.
Features 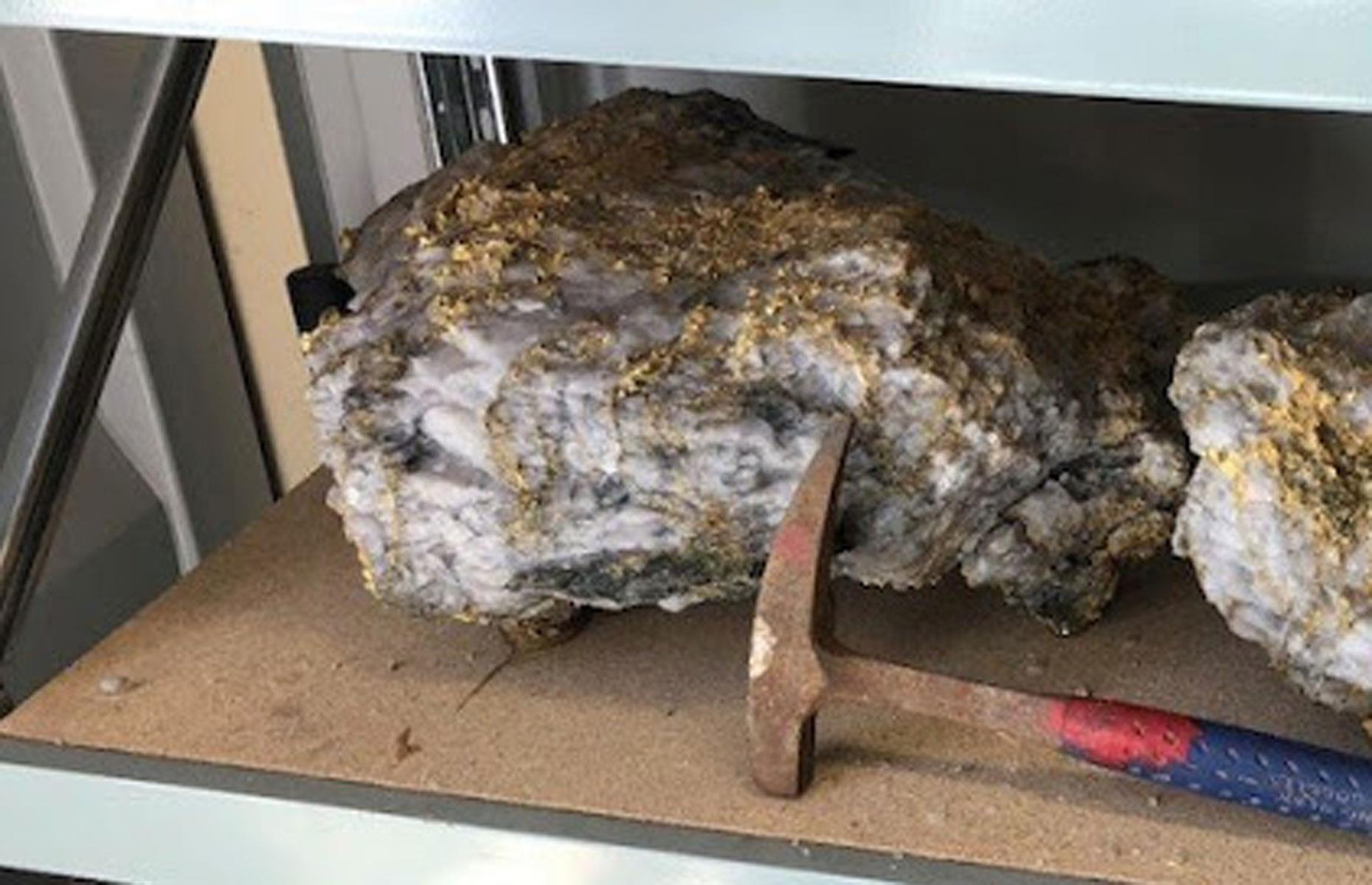 Not a true nugget as such due to its impure content, this enormous gold-encrusted rock was discovered in September 2018 at RNC Minerals' Beta Hunt mine near Kambalda, Western Australia. Valued at $2 million (£1.5m), the impressive slab reportedly contains 1,600 ounces (45.4kg) of pure gold.
Features

The biggest nugget discovered in gold-rich Ballarat, Australia, the Welcome Nugget was unearthed by a group of miners from Cornwall, England in June 1858. It was sold for £10,500, which is $1.7 million (£1.3m) in today's money. Like the Blanche Barkly Nugget, the huge lump of gold was exhibited at London's Crystal Palace, and eventually bought by the Royal Mint and melted down into sovereign coins.
Features 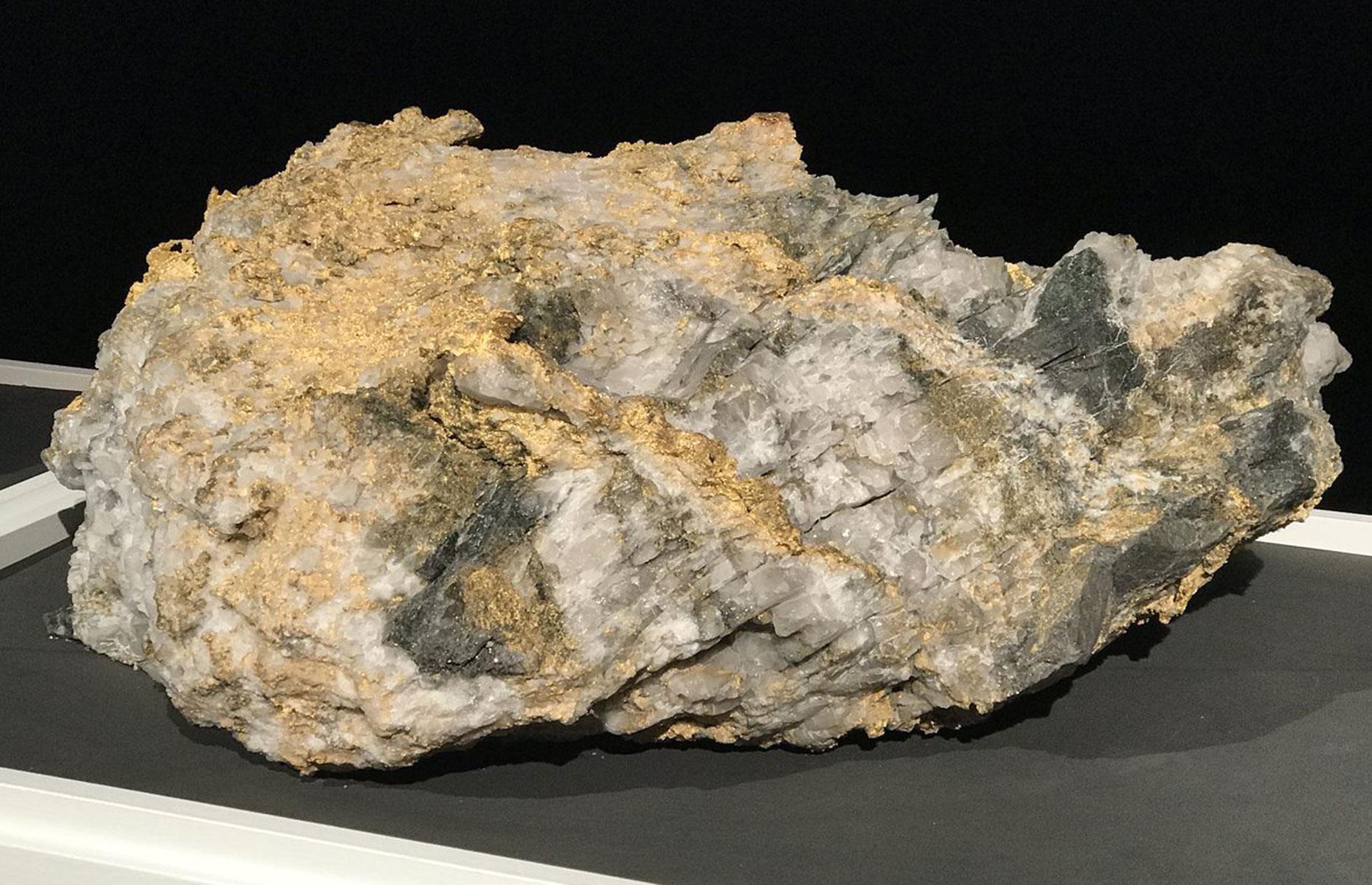 Miners working for RNC Minerals unearthed an even larger gold-encrusted rock at the Beta Hunt mine in Western Australia back in September 2018. This eye-opener weighs in at a back-breaking 3,351 ounces (95kg) and is said to contain around 2,400 ounces (68kg) of pure gold valued at $3 million (£2.3m).

Discover these glittering facts you never knew about gold 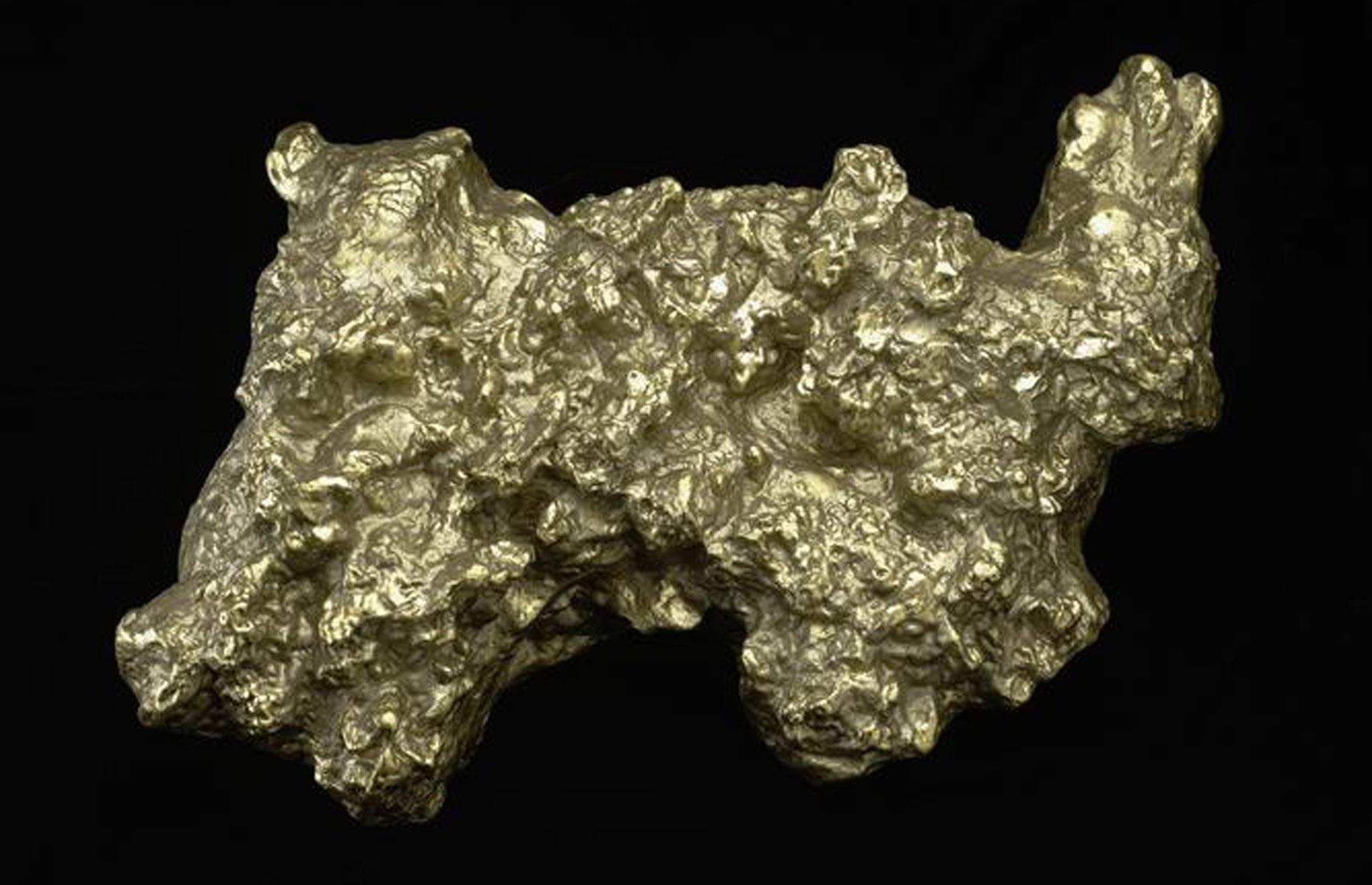 The magnificent Welcome Stranger, the granddaddy of all true gold nuggets, was found by English prospectors John Deason and Richard Oates in February 1869 at Moliagul in Victoria, Australia. Weighing in at a jaw-dropping 3,524 ounces (99.9kg), the monster nugget was broken up into three pieces that were later melted down. It would be worth at least $3 million (£2.3m) if still intact today.

Which countries really own the most gold? 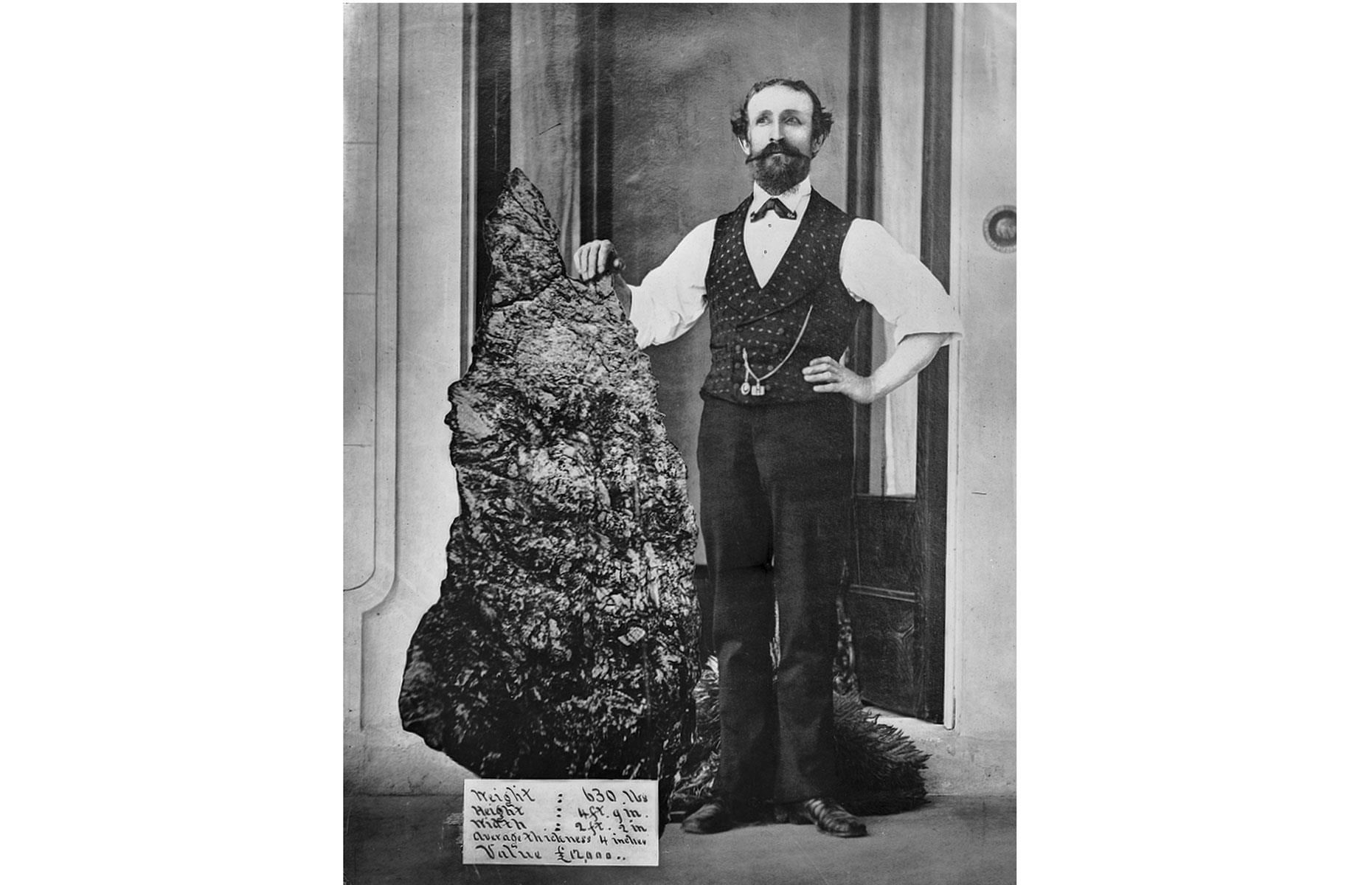 While the Welcome Stranger is the largest gold nugget ever found, the biggest single gold specimen discovered on the planet is the Holtermann 'Nugget'. Unearthed in October 1872 by German-born miner Bernhardt Holtermann at Hill End in New South Wales, Australia, the gold-embedded-in-quartz specimen weighed a staggering 10,229 ounces (290kg). The rock was valued at £12,000, which is $1.7 million (£1.3m) in today's money, before it was crushed and the gold extracted.

Fancy trying your hand at gold panning? See where you can still prospect for gold