The visionary business leader's rise to the top

A textbook example of the American Dream, visionary business leader Howard Schultz rose from the New York projects to become the multibillionaire CEO and chairman of Starbucks, not to mention the owner of the Seattle SuperSonics and Seattle Storm basketball teams, and a leading private equity investor to boot. As the rags-to-riches coffee magnate ponders an independent 2020 presidential bid, we take a look at his incredible journey to the top.
Features
1 of Courtesy Howardschultz.com
List View Gallery View Full screen

Howard Schultz was born into a poor, working-class Jewish family on July 19, 1953 in Brooklyn, and moved with his parents and siblings to the Bayview Houses projects in Canarsie, a neighborhood in the southeastern part of the New York borough, when he was three-years-old. Schultz's early life was framed by poverty.
Features
2 of Courtesy Sheldon Goldstein via Bayview Houses Canarsie Brooklyn 11236/Facebook
List View Gallery View Full screen

The Schultz clan lived in a particularly cramped apartment. In 1961, when Schultz was seven, his father Fred broke his ankle while working as a delivery driver. Since he had no worker's compensation or health insurance, the family struggled to make ends meet. The experience later inspired the Starbucks boss to offer health insurance to all his employees, including part-time baristas.
Features
3 of Stockelements/Shutterstock
List View Gallery View Full screen

A natural athlete, Schultz was massively into sports as a kid, and played baseball, basketball, and football “from dawn to dusk” throughout his childhood. This talent for sports and passion for team games would turn out to be his ticket out of Canarsie, and provide the means to escape a life of poverty.
Features
4 of Gregory James Van Raalte/Shutterstock
List View Gallery View Full screen

Schultz developed a strong work ethic from the get-go. He had a paper route from the age of 12, getting up at sunrise every day to deliver newspapers. At 16, Schultz bagged an after-school job at a furriers in Manhattan's Garment District stretching animal skins, and spent a summer working in a sweatshop in intense heat.
Features
5 of Fox Photos/Getty
List View Gallery View Full screen

Growing up in multi-ethnic Canarsie, Schultz, who has famously railed against racial injustice and all forms of discrimination, developed a keen sensitivity to issues of difference and belonging, which helped bring about Starbucks' well-intentioned (but ultimately unsuccessful) Race Together campaign in 2015. “Nobody ever had to lecture us about diversity; we lived it,” he later commented.
Features
6 of Jim.henderson [Public domain], from Wikimedia Commons
List View Gallery View Full screen

Schultz realized that the only way he could get out of the Canarsie projects would be to focus on sports rather than schoolwork. He spent as much time as he could playing football and made quarterback on the Canarsie High School team. One fateful day, a college recruiter came to the school to scout another player, and spotted Schultz in the process, changing his life forever.
Features
7 of Joe Gavlas/Flickr CC
List View Gallery View Full screen

Schultz was offered a football scholarship to Northern Michigan University. He duly accepted and headed to Marquette, Michigan at the age of 18 in 1971, the same year Starbucks was founded. The future business leader majored in communications. He took out loans and worked part-time and summer jobs to cover his expenses, even donating his blood to make extra cash, but in the end, never actually played football for the college.
Features
8 of Courtesy Howardschultz.com
List View Gallery View Full screen

The first member of his family to graduate college, Schultz left Northern Michigan University in 1975 with a diploma. Unsure about what to do career-wise, he worked at a Michigan ski lodge for a year, before returning to New York and landing a sales role with computer and photocopier company Xerox.
Features
9 of Courtesy Xerox
List View Gallery View Full screen

Xerox provided Schultz with comprehensive training in sales, marketing, and presentation skills, and he fast-became one of the company's top salespersons. In no time at all, Schultz managed to pay off his student loans and had enough money to move into an apartment in Manhattan's Greenwich village, which he shared with another guy.
Features
10 of Courtesy Howardschultz.com
List View Gallery View Full screen

During the long hot summer of 1978, Schultz together with eight friends rented a house in the Hamptons, and it was on the beach there on July 4 that he met his future wife, interior design student Sheri Kersch (pictured here at their wedding in 1982). It was love at first sight, and the smitten pair began dating almost immediately.
Features
11 of Holger.Ellgaard/Hammarplast, via Wikimedia Commons
List View Gallery View Full screen

The following year Schultz joined drip coffee maker manufacturer Hammarplast, a then subsidiary of Swedish firm Perstop, which was entering the US market. Before long, the hard-working businessperson had risen through the ranks, becoming the company vice-president and sales manager, responsible for a team of 20.
Features
12 of Inacioluc/Shutterstock
List View Gallery View Full screen

Schultz excelled in the role. His love of good coffee and the company's stylish Scandi products fueled his passion for the job, and he was soon making $75,000 (£58k) a year, a cool $229,000 (£177k) in today's money. He and Sheri moved to a classy apartment in Manhattan's Upper East Side, a world away from the Canarsie projects, and got married in 1982.
Features 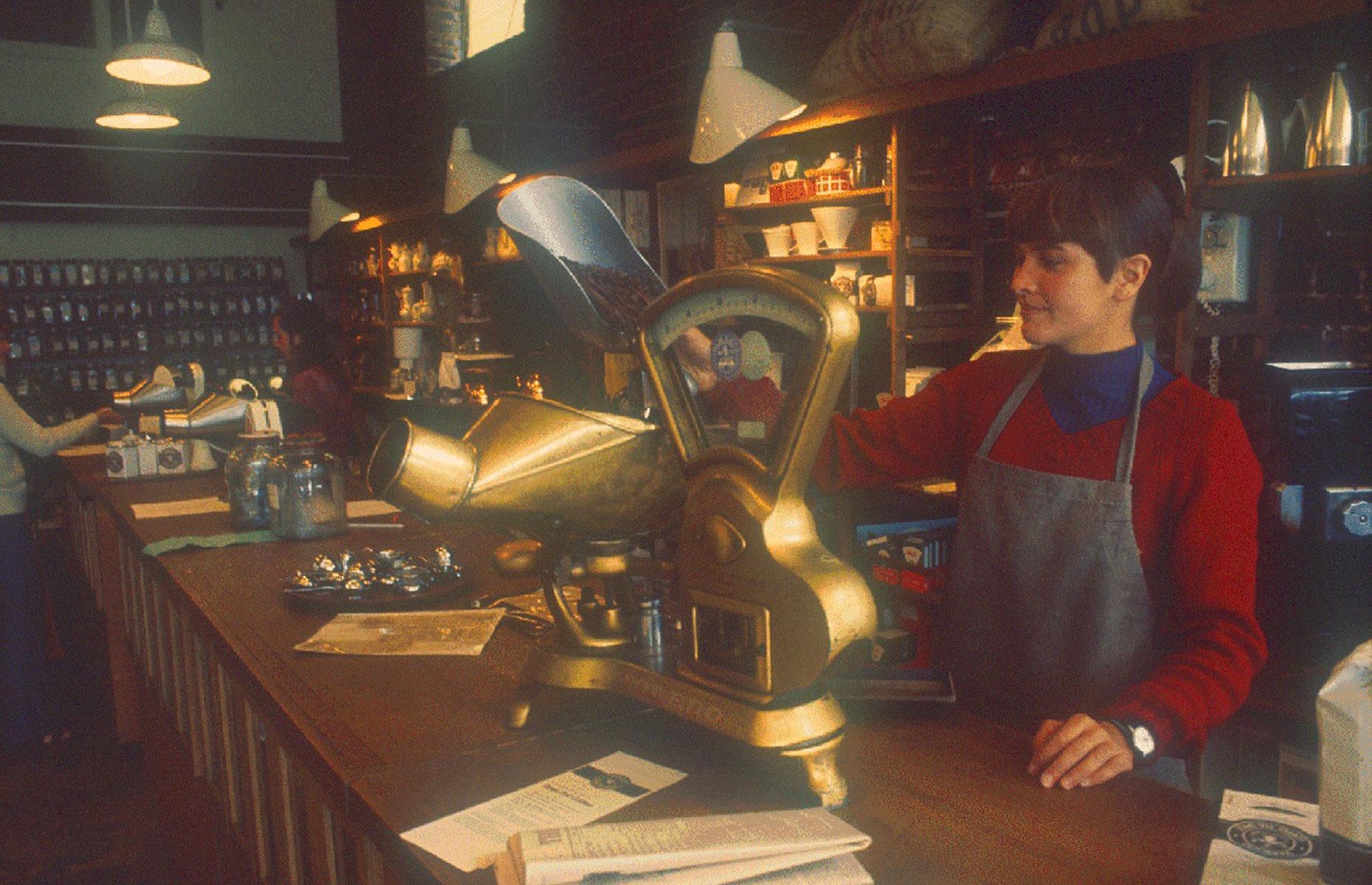 Yet Schultz was “getting antsy”. Despite his fabulous job and gold-plated salary, he knew he was capable of so much more. A year before his wedding, Schultz noticed a small coffee company in Seattle was ordering even more drip coffee makers than department store giant Macy's. Intrigued, the consummate salesperson made a beeline for the rainy West-Coast city to investigate.
Features
14 of Courtesy Starbucks
List View Gallery View Full screen

The company, Starbucks, had four compact stores in Seattle that were doing a roaring trade selling whole bean coffee, teas, spices, and specialist equipment. Schultz met with the owners Jerry Baldwin and Gordon Bowker, and was bowled over by their enthusiasm and dedication to providing customers with the finest coffee products.
Features
15 of Songquan Deng/Shutterstock
List View Gallery View Full screen

Eager to work for the duo, Schultz kept in contact and finally decided to join the company as director of marketing. In 1982 following their wedding, Schultz and his wife Sheri left their swanky Upper East Side apartment behind and decamped to Seattle, with Schultz taking a hefty pay cut to follow his dream.
Features
16 of Songquan Deng/Shutterstock
List View Gallery View Full screen

In 1983, Schultz was sent by his new company to a trade show in Milan. While strolling around the Italian city, he noted that coffee bars had pride of place on almost every street, and that they served not just as places where you could get an impeccable espresso, cappuccino or latte, but also as welcoming, friendly meeting points for friends and family. “It was like an epiphany,” he subsequently recalled.
Features
17 of Courtesy Starbucks
List View Gallery View Full screen

Upon his return, Schultz made it his mission to persuade the owners of Starbucks to offer espressos and the like to their customers and create an Italian café ambiance in their stores, but after a reluctant trial, Jerry Baldwin and Gordon Bowker remained unconvinced. They wanted to stay small and avoid getting into the café business.
Features
18 of Courtesy Starbucks
List View Gallery View Full screen

Schultz was crestfallen and with a heavy heart, decided to quit his Starbucks job in 1985 and go it alone. However, he managed to stay on good terms with the owners of Starbucks, and along with a doctor friend, they provided funding for Schultz to set up his very own chain of coffee bars, which he named 'Il Giornale' after the famous Milanese newspaper.
Features
19 of Courtesy Starbucks
List View Gallery View Full screen

The first Il Giornale outlet opened in Seattle in 1986, the same year Howard and Sheri Schultz's first child Jordan was born, offering quality Italian coffee, as well as gourmet ice cream. The coffee bar was a big hit, and Schultz launched several other locations in the city. The following year, Jerry Baldwin and Gordon Bowker opted to focus on their Peet's Coffee and Tea business, and sold Starbucks and their majority interest in Il Giornale to Schultz for $3.8 million (£3m).
Features
20 of Courtesy Starbucks
List View Gallery View Full screen

In 1988, the socially conscious CEO provided every single one of Starbucks' 1,800 employees, including the part-time workers who made up half the sales force, with an enviable benefits package that included stock options, the aforementioned medical and dental insurance, and to cap it all, a free pound of coffee each week.
Features 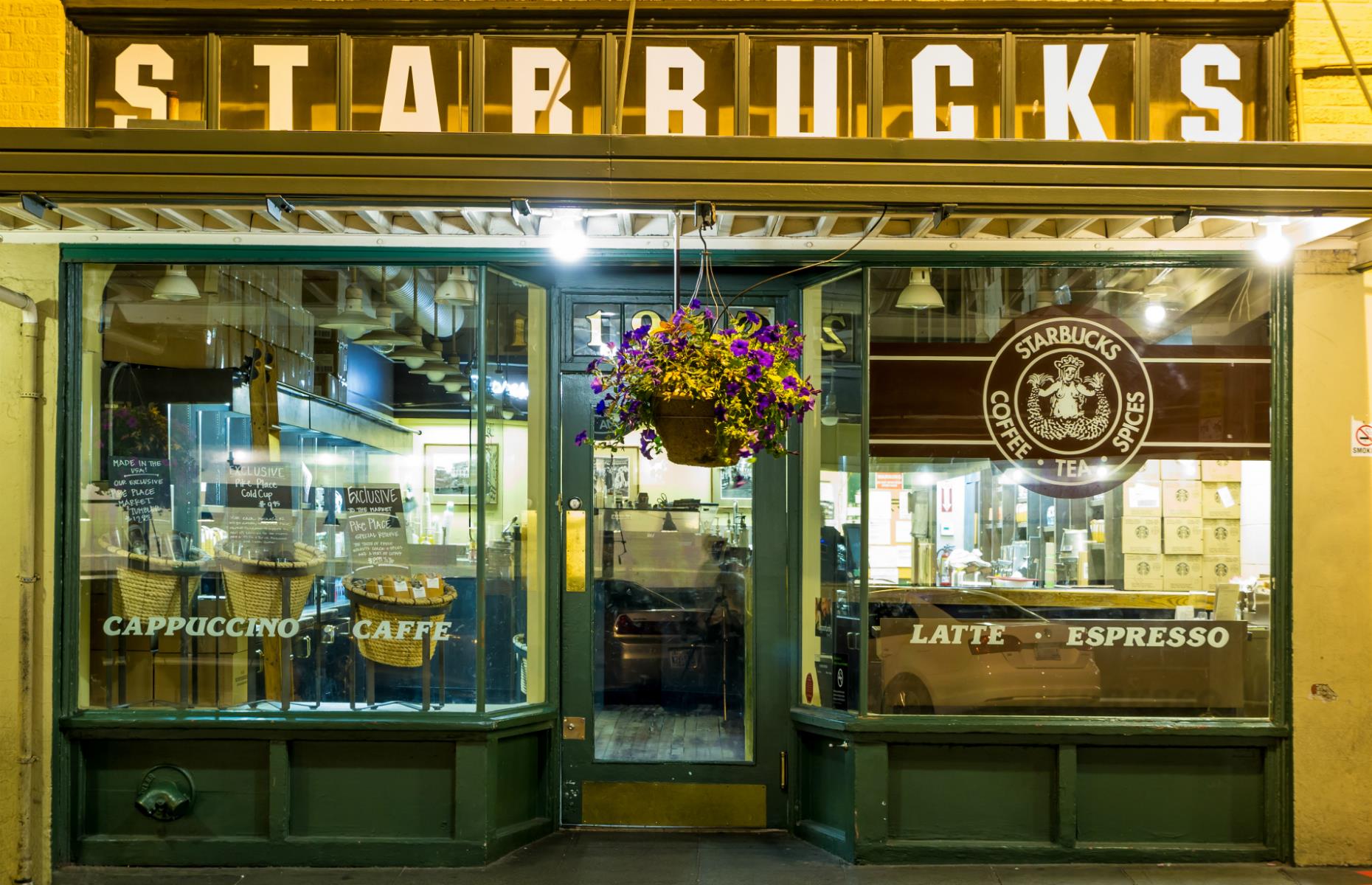 An unstoppable force, Starbucks went from strength to strength, and was floated on the stock market in June 1992. By this point, the chain comprised 165 outlets across the US and Canada, and was turning over an impressive $93 million (£72m) annually, up 65.1% on the previous year. The share price skyrocketed and the company continued to expand spectacularly.
Features
24 of Ned Snowman/Shutterstock
List View Gallery View Full screen

Having conquered the US and Canada, Schultz turned his attention to expanding outside of North America, and in 1996, the first overseas Starbucks location opened in Tokyo, Japan. A Singapore store wasn't too far behind, and the following year, the company launched in the Philippines. Starbucks entered the UK market in 1998 following the acquisition of all 56 Seattle Coffee Company stores, which were rebranded as Starbucks.
Features
25 of Courtesy Maveron
List View Gallery View Full screen

A billionaire by the turn of the millennium, Schultz headed a group of 10 investors in 2001 to snap up the NBA team Seattle SuperSonics and the WBA's Seattle Storm from the Ackerley Group for $200 million (£154.7m). Schultz's ownership of the teams was marred by controversy however, and he ended up selling them on in 2006.
Features
27 of Toru Yamanaka/AFP/Getty
List View Gallery View Full screen

After 13 years, Schultz stepped down as Starbucks CEO in 2000 to focus on expanding the company internationally. But when in-store growth stalled in 2008, he assumed his former role in an effort to turn Starbucks around, much to the delight of investors, who were becoming concerned by the company's lackluster performance.
Features
28 of Mario Tama/Getty
List View Gallery View Full screen

The conscientious CEO got to work and didn't waste any time shuttering unprofitable outlets and firing under-performing executives. A chief technology officer was hired and Schultz oversaw the introduction of a loyalty card. He even closed down all US locations temporarily to retrain baristas in how to make a killer espresso. Schultz saved the day and Starbucks returned to exceptional growth.
Features
29 of Courtesy FCKH8
List View Gallery View Full screen

Ever-dedicated to stamping out all forms of discrimination, Schultz came out in support of same-sex marriage in 2012, and stood his ground, despite a “Dump Starbucks” campaign that called for a boycott of the brand, and opposition from a number of investors, who thought the stance would erode the company's bottom line.

Check out these amazing facts you probably didn't know about Starbucks

Ever-dedicated to the well-being of his employees, Schultz launched the Starbucks College Achievement Plan in 2014, a unique program to give staff a tuition-free college education. By the spring of this year, more than 1,750 Starbucks employees will have graduated, many of whom will be the first member of their family to do so, just like their boss.

From Starbucks to Sony, these famous brands changed their names

Schultz resigned as CEO in 2017 ostensibly to build high-end Reserve-branded coffee shops, sparking speculation he would run for president. Schultz (pictured here with his wife Sheri, two children and their partners) retired as chairman last summer, and confirmed in January that he is exploring an independent 2020 presidential bid. The announcement has drawn the ire of Democrats, who believe Schultz could split the anti-Trump vote, and result in the Republican president gaining a second term.

Now read the incredible story of the world's most maverick billionaire