Amancio Ortega is founder of the iconic Inditex fashion group and Zara fashion brand, which now operates across a staggering 93 countries worldwide. But this publicity-shy mogul came from very humble beginnings to being crowned the world's richest man back in 2016. Here's his incredible story.
Features
1 of LFRabanedo / Shutterstock
List View Gallery View Full screen

Born in a small Spanish town

Ortega was born in the northwestern Spanish town of Busdongo de Arbas on 28 March 1936. The fashion mogul's background had nothing of the riches that he would go on to make. Ortega was raised by his railway worker father and his housemaid mother. They were so poor that his mother had to ask the local shopkeeper for credit to feed her family on occasion, which was sometimes refused, shaming the young Amancio.

Although he was a well-behaved kid, Ortega left school at just 14 years old so he could earn money to keep the family’s head above water. It gave him a work ethos which he took with him for the rest of his life.

By his mid-20s, Ortega, along with his first wife Rosalía Mera and his siblings, started out by making their own bathrobes and then expanded into lingerie. It wasn’t long before he went on to establish his own factory to begin his now famous journey in fashion. In 1963 Ortega opened his first business and workshop in A Coruña in northwestern Spain called Confecciones GOA. The quaint workshop, which made gowns and dresses, would be the foundation block of his fledgling empire. Within a decade, the staff numbers at the workshop grew to 500.

After making dresses for over a decade, Ortega decided to branch out and open his first Zara shop in 1975 in A Coruña. The store was originally going to be called Zorba, after the Greek god, but the company discovered there was a bar with the same name two streets away. "They had already made the moulds for the letters in the sign, so they just rearranged them to see what they could find. They found Zara," the company's communications director Jesus Echevarría told the New York Times.

The birth of fast fashion

The store garnered a reputation for offering quality yet affordable garments. The dictator Francisco Franco died that year, and the new brand embodied the modernity and change that was beginning to sweep across Spain. Ortega came up with a new marketing concept called ‘fast fashion’ where he would refresh the stock in his shop every 48 hours. During this era, it could take months for fashion outlets to refresh their stock, but Ortega changed the game to get new clothes on the rack quicker than ever before.

After the success of Zara’s first store, Ortega decided to establish a factory for both GOA and Zara on the outskirts of A Coruña in 1977. It also established its headquarters and it remains based in the city today over 40 years later.
Features
7 of Yui Mok/PA Archive/PA Images
List View Gallery View Full screen

By 1983, the Zara brand was already becoming a name in the fashion retail industry and started to expand and enjoy vast growth. Ortega launched Zara stores across some of Spain’s most famous and cosmopolitan cities such as Madrid and Barcelona.
Features
8 of Fourmy Mario/ABACA/PA Images
List View Gallery View Full screen

In a quest to bring all his companies together in one single entity, Ortega founded and launched Inditex in 1985 with his then-wife Rosalia Mera. The company went on to open and manage more than 7,200 stores across 93 markets in the world. In 2017 alone, Inditex generated $25.3 billion (£19.6bn) in revenue and is still seen as a fashion retail powerhouse over 30 years after its launch.

In 1988, over 25 years after Ortega opened his first workshop and 13 years after launching his brand, Zara opened its first international store in Porto, Portugal. The move was the first step on a path to dominating fashion retail on a global scale.
Features
10 of John Walton/PA Archive/PA Images
List View Gallery View Full screen

Introducing Zara to France and America

As the 80s turned into the 90s, the Zara brand made its global takeover intentions known by opening stores in not only France but also in America for the first time. The two new stores were opened on Rue Halévy in Paris and on Lexington Avenue in New York.
Features
11 of Yui Mok/PA Archive/PA Images
List View Gallery View Full screen

As Zara was performing so well, Ortega wanted to explore other opportunities with his Inditex firm. In 1991, Inditex took on two new fashion brands, Spanish firm Pull&Bear and Lebanese brand Massimo Dutti.

Off the back of the Zara brand’s success across Portugal, France, and America, Ortega continually opened new branches across emerging global markets. Between 1992 and 1997, Ortega opened Zara stores across nations such as Mexico (1992), Greece (1993), Belgium and Sweden (1994), Malta (1995), Cyprus (1996) and Norway and Israel (both 1997).
Features
13 of Yui Mok/PA Archive/PA Images
List View Gallery View Full screen

The exponential growth of Zara in the 1990s is truly sensational and the reason why Amancio Ortega became one of the richest people in the world over the next 15 years. By 1997, Zara had opened over 600 stores across 14 markets. And its expansion was far from finished.
Features
14 of Richard Gray/EMPICS Entertainment
List View Gallery View Full screen

Inditex launched its new Bershka brand in 1998, which was geared to the fashion needs of younger people. The brand was an instant success and opened stores across the UK, UAE, Turkey, Japan, Argentina, Lebanon, Venezuela and Kuwait in a two-year period.
Features
15 of inditex.com
List View Gallery View Full screen

Inditex HQ gets a makeover

In 2000, Ortega's fashion empire moved into a brand new building in A Coruña. The state-of-the-art headquarters were built in order to adapt to the group's growth. Around the same time stores opened in Andorra, Denmark, Qatar and Austria.

The group's success continued into the next century, with 2001 turning into a monumental year for Inditex as the company went public on the Madrid Stock Exchange, with Ortega holding 59% of the shares in the firm. Inditex also joined the Dow Jones Sustainability Index (DJSI), launched its new lingerie brand, called Oysho, and also opened in six new markets.
Features
17 of Kris Tripplaar/SIPA USA/PA Images
List View Gallery View Full screen

Not wishing to rest on his laurels and solely focus on clothing and fashion items, Ortega created a new home and interiors brand called Zara Home. The first Zara Home stores were opened in 2003 and added another level of diversity to the already hugely popular brand.
Features
18 of NurPhoto/SIPA USA/PA Images
List View Gallery View Full screen

By 2004, Zara was already scaling new heights in terms of success and reached the 2,000-store milestone. Ortega opened his 2,000th store in Hong Kong and by this time the brand was now established in 56 markets across Europe alone.
Features
19 of Casimiro PT / Shutterstock.com
List View Gallery View Full screen

Keeping up with the evolving nature of e-commerce and online shopping, Zara opened its first online store in 2007, Zarahome.com. This coincided with the launch of the 1,000th store in Florence, Italy.
Features
20 of Myung Jung Kim/PA Archive/PA Images
List View Gallery View Full screen

During one of his rare public announcements in the Inditex 2009 annual report, Ortega talked about how his customers have always driven his fashion business model. He stated in the report that “the customer must continue to be our main centre of attention, both in the creation of our fashion collections and in the design of our shops, of our logistical system and of any other activity."

No office for Ortega

One of the most unique things about Ortega is that he has never had his own office, a habit that was apparently driven by his humble roots. He would sit at a desk in his headquarters at A Coruña to meet with his designers and staff.
Features
22 of MIGUEL RIOPA/AFP/Getty Images
List View Gallery View Full screen

Another quirk of this billionaire businessman is his decision not to wear a tie. On the rare occasions he has been photographed he's wearing an open shirt.

Richest person in the world in 2016

By 2016, the fashion mogul one was of the wealthiest people on the planet and was actually ranked by Forbes as the richest person in the world in front of Bill Gates for three small stints. And although he was routinely ranked in third place for the majority of 2016 and 2017, he was at the time the wealthiest man in Europe and the richest retailer in the world. What does he spend his money on? Ortega is known to have bought a $35 million (£27m) yacht in 2018.
Features
24 of krivinis / Shutterstock
List View Gallery View Full screen

The owner of Madrid’s tallest skyscraper

Alongside his many investments in the real estate industry, Amancio Ortega is also the owner of what was once Madrid’s tallest skyscraper, the Torre Picasso. The tower is 515 feet (157m) high over 43 floors. At this moment, the skyscraper is Madrid’s fifth tallest building and the 10th tallest in Spain.

A passion for horses

Outside of fashion, one of Ortega’s other passions is for horses. He actually owns an equestrian centre in Finisterre, Galicia, where he likes to ride with his daughter Marta, who was previously married to international show jumper Sergio Álvarez Moya until they divorced in 2015.
Features
27 of Imaxe Press / Shutterstock
List View Gallery View Full screen

Ortega never gets tired of work

Ortega’s biographer and family friend Covadonga O'Shea said in the book Man from Zara that: "He loves working around all his employees." He loves listening to the ideas from his staff and designers and even though he is over 80 years old, he believes it’s essential to continually innovate. He never gets tired of working or hearing new ideas.
Features
28 of Piovanotto Marco/ABACA/PA Images
List View Gallery View Full screen

Complacency is a killer

The Spanish newspaper and business publication Cinco Dias reported that, when talking to a group of business professors back in 2007, Ortega said: "Success is never guaranteed." He went on to tell them: "I never allow myself to be content with what I have done, and I have always tried to instill this in everyone around me."
Features
29 of Imaxe Press / Shutterstock
List View Gallery View Full screen 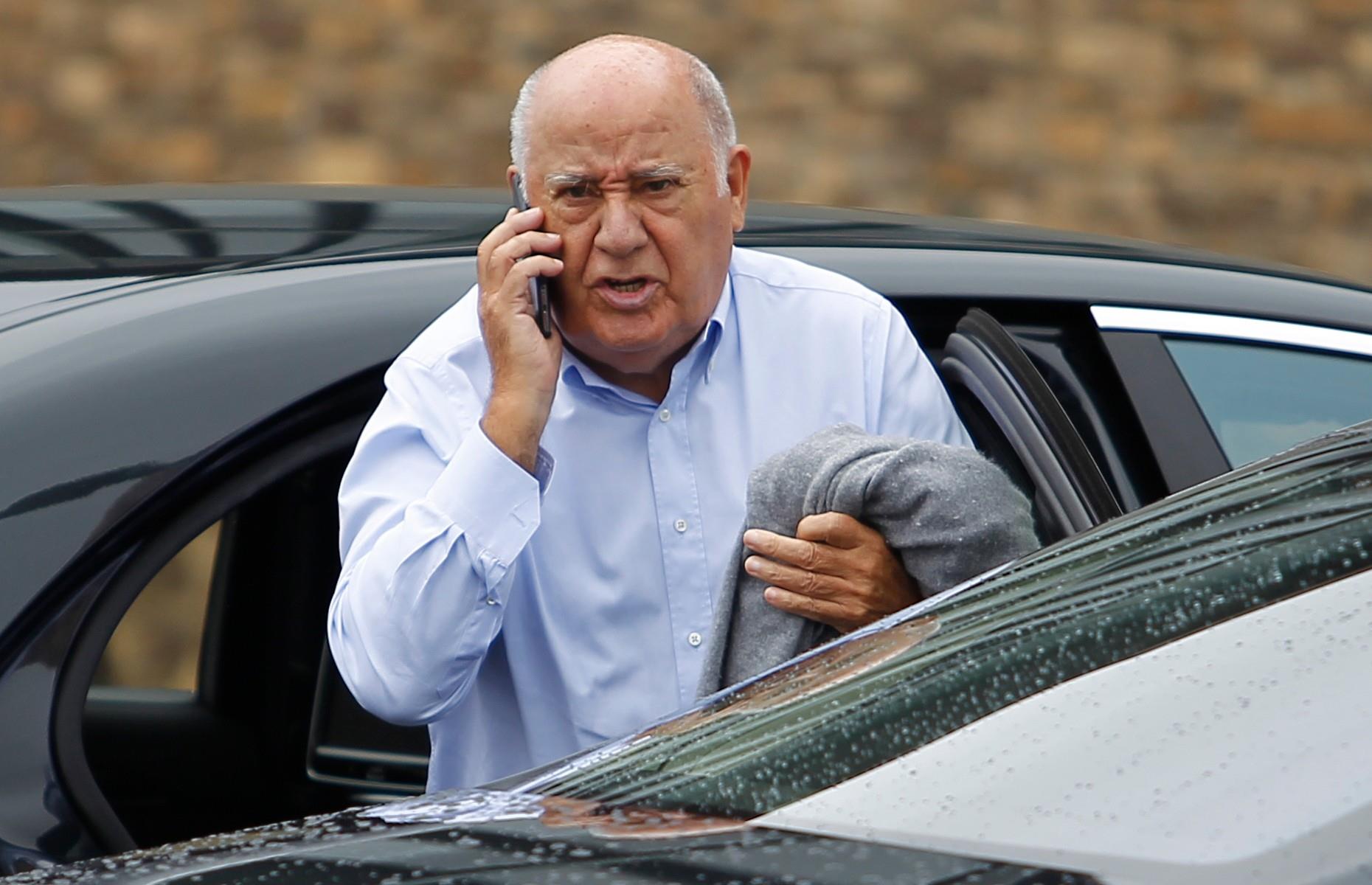 From railway worker's son to riches

According to Forbes’ 2018 Billionaire List, Ortega is the sixth richest man in the world with a current net worth at the time of writing of $63.4 billion (£49bn). The only people richer than the fashion mogul in 2018 in descending order are Jeff Bezos, Bill Gates, Warren Buffett, Bernard Arnault and Mark Zuckerberg. Not bad for a railway worker's son from an impoverished background.

Now meet another billionaire with a huge fashion empire