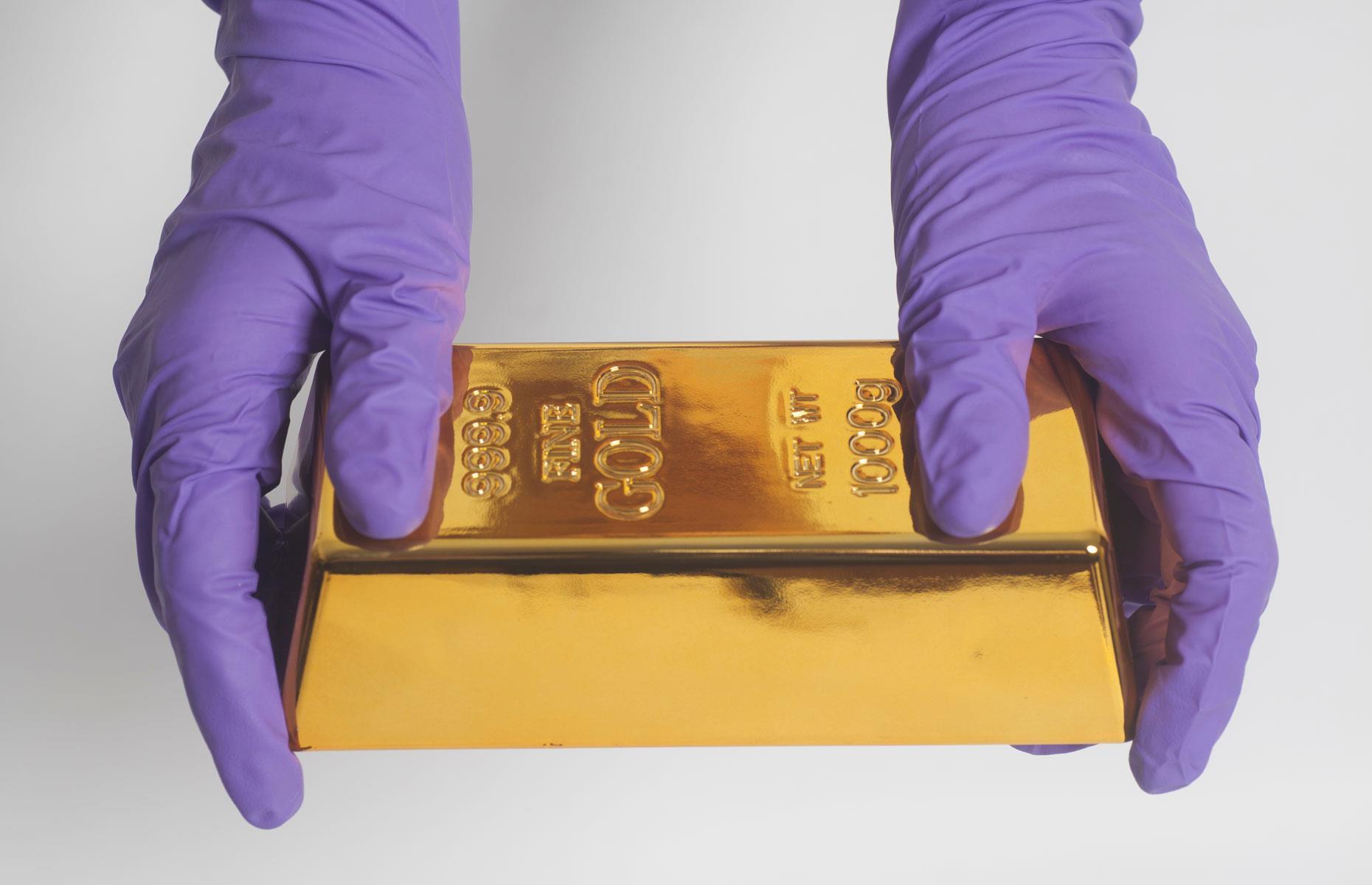 One person's trash is another's treasure...

From a signed David Bowie painting to gold bars, some people have discovered rare and valuable items in dumps and on garbage piles. Click or scroll through some of the most jaw-dropping items that got thrown away but were then saved.
Features 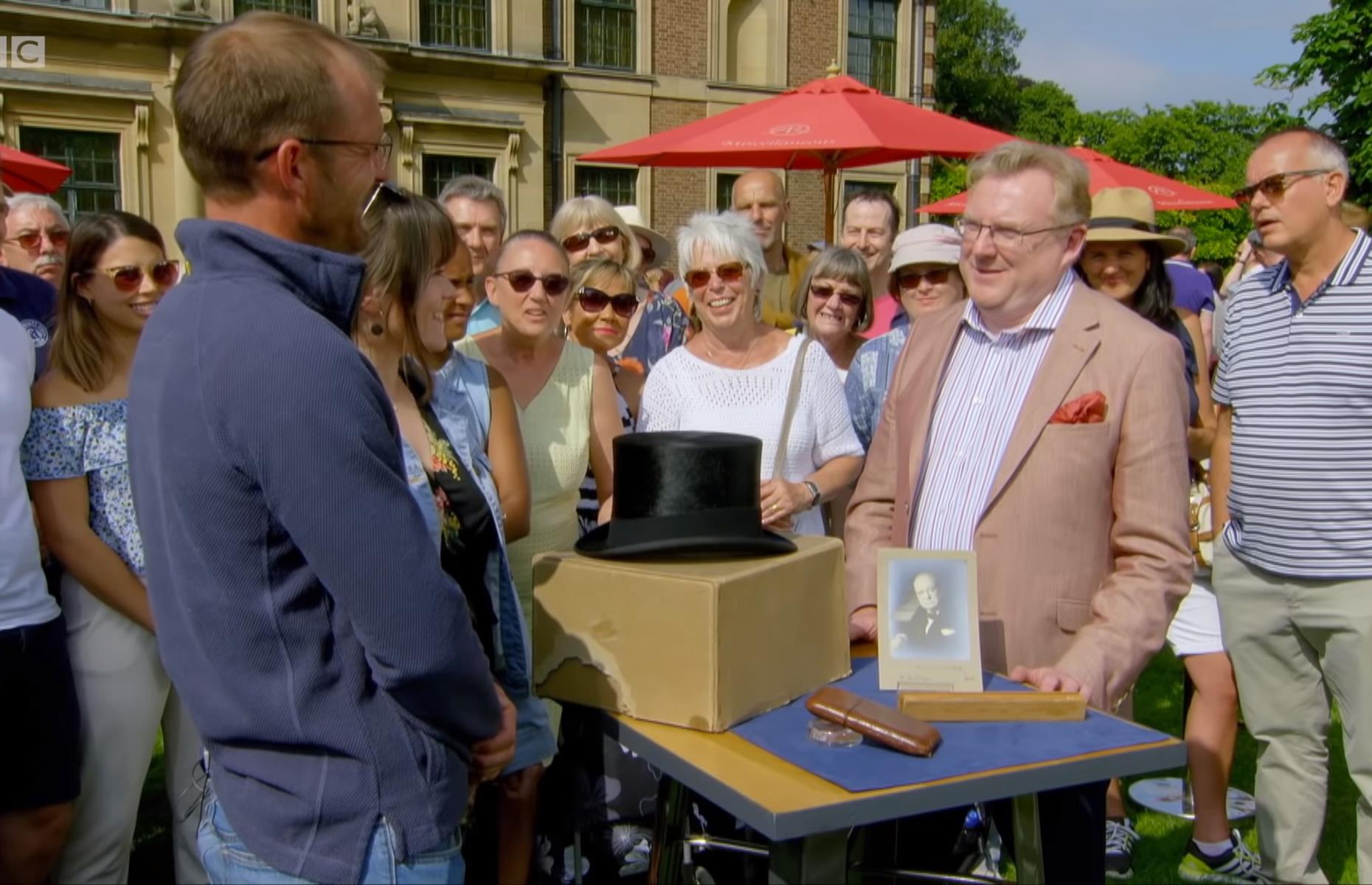 Britain's wartime Prime Minister Winston Churchill was known for his iconic top hat and cigar – so a refuse worker couldn’t believe it when he found both items in the trash. He showed them on the UK version of TV show Antiques Roadshow in March 2019. 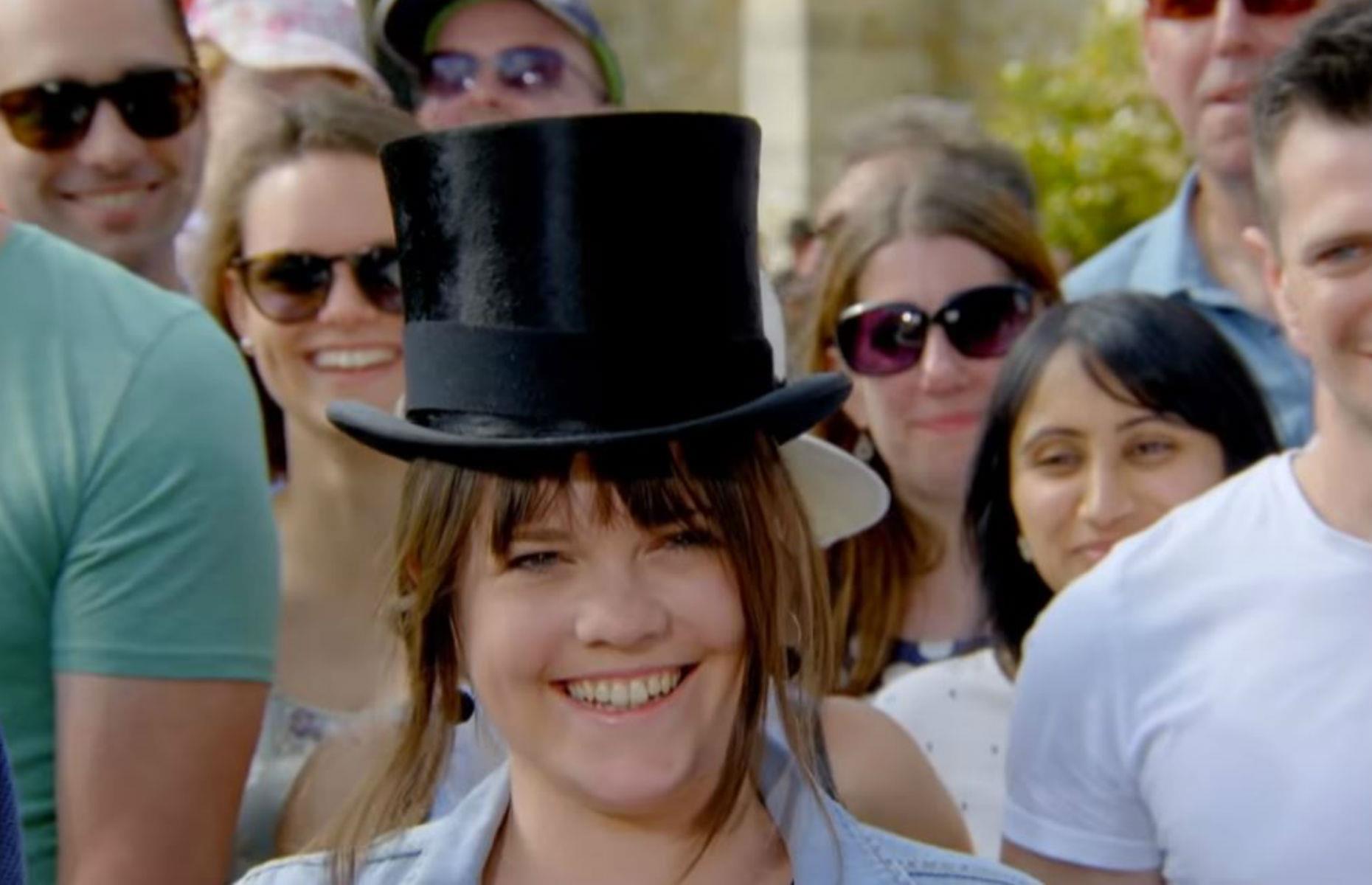 The top hat and cigar were presented by David Rose, along with 200 letters from Churchill’s cook, which provided fascinating insights into the famous politician's day-to-day life. The antiques were valued at $13,140 (£10.1k).
Features 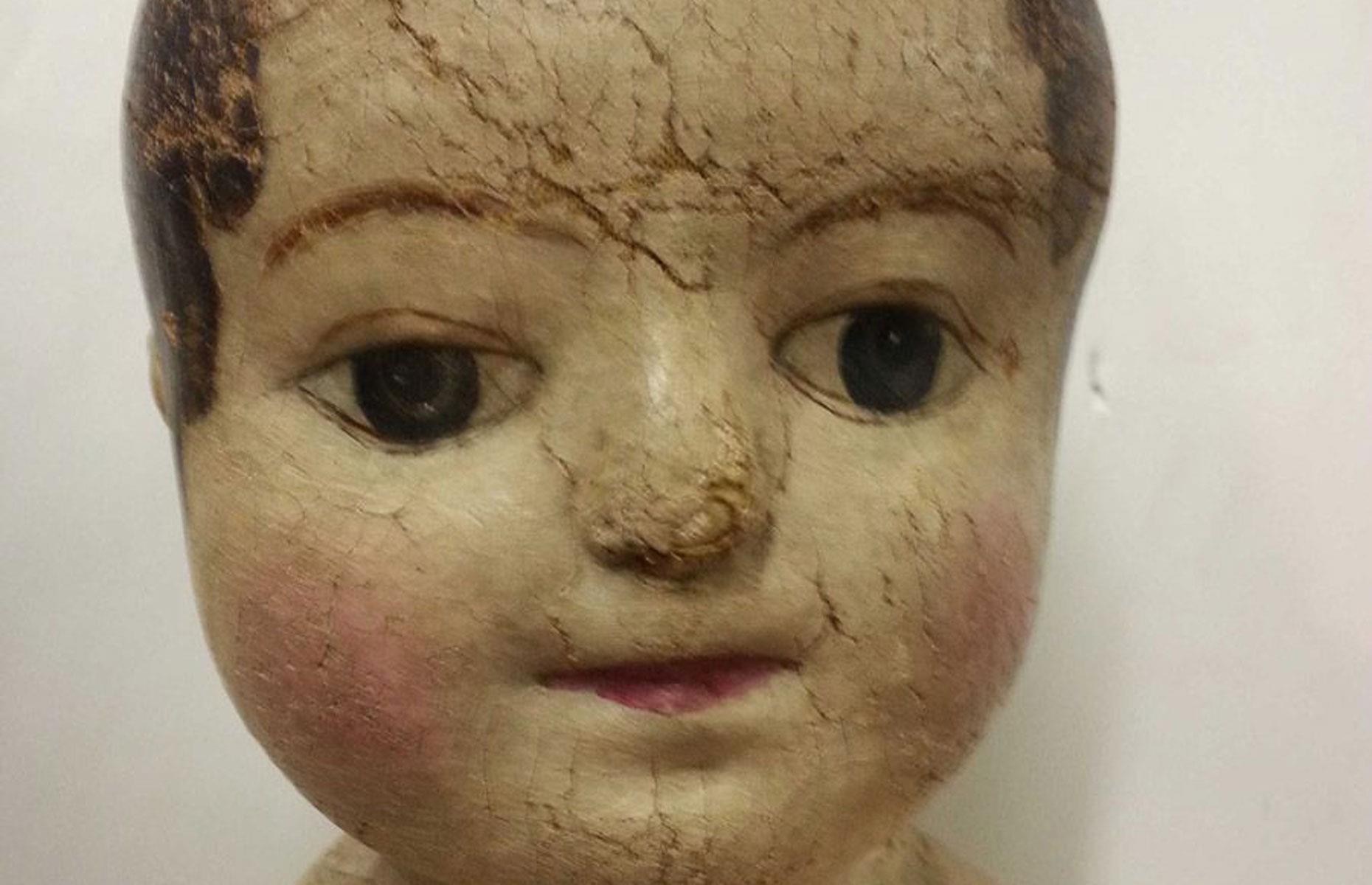 A toy enthusiast from Rhode Island chanced upon this 19th-century doll in a local garbage heap sometime during the mid-1990s. Though most people would run a mile if they saw a creepy doll in the trash staring back at them, the lady rescued the slightly sinister plaything and brought it home.
Features 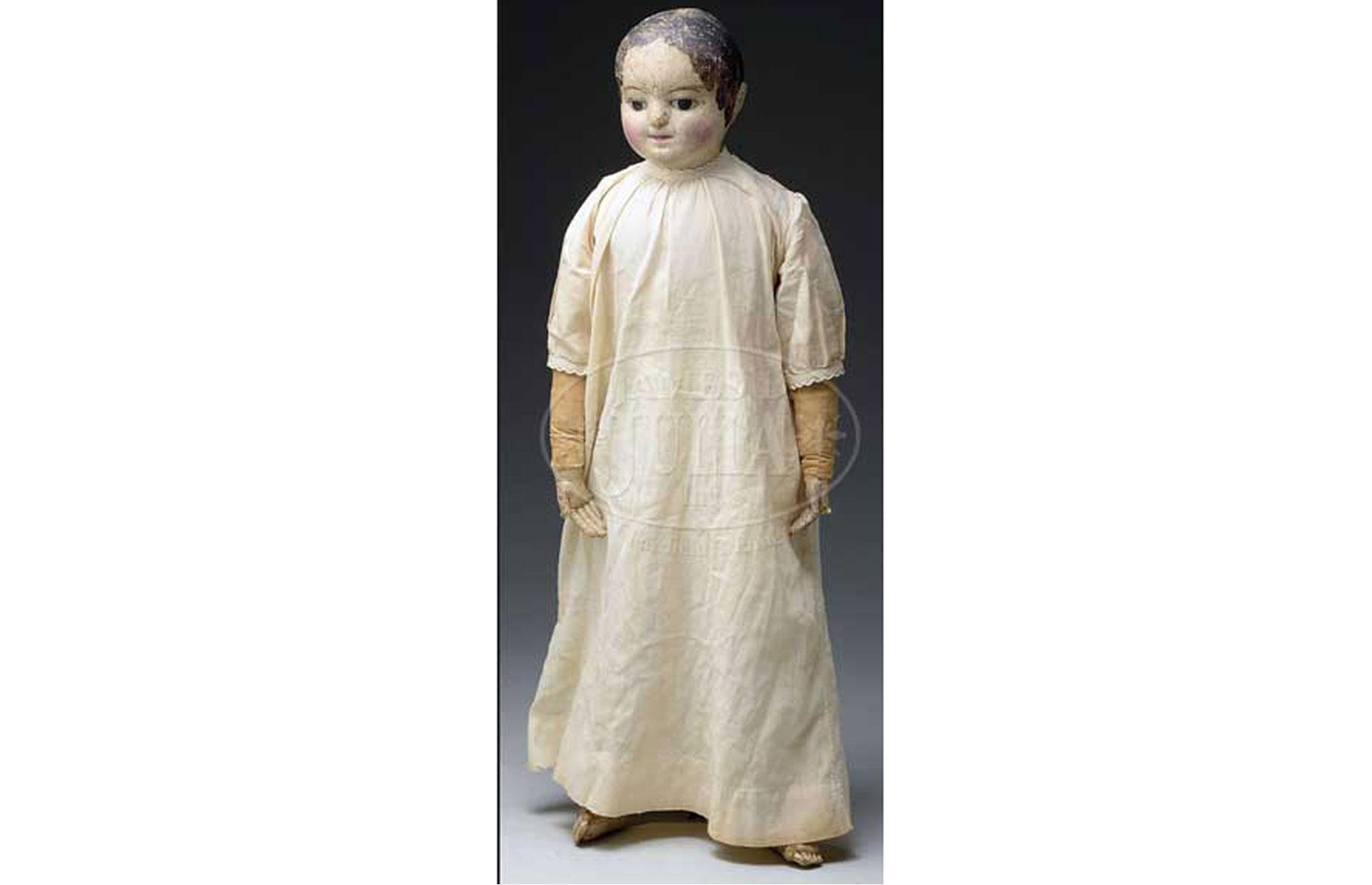 In 2014, the lady's husband, who was recently widowed, decided to see if the raggedy doll his late wife retrieved from the garbage way back when was worth anything. He took it into James D. Julia Auctioneers in Fairfield, Maine for a valuation. To the man's amazement, the valuer informed him the object was in fact a hand-painted cloth doll crafted around 1860 by notable Rhode Island toymaker Izannah Walker. Not long after, it went under the hammer for $14,200 (£10.9k).
Features 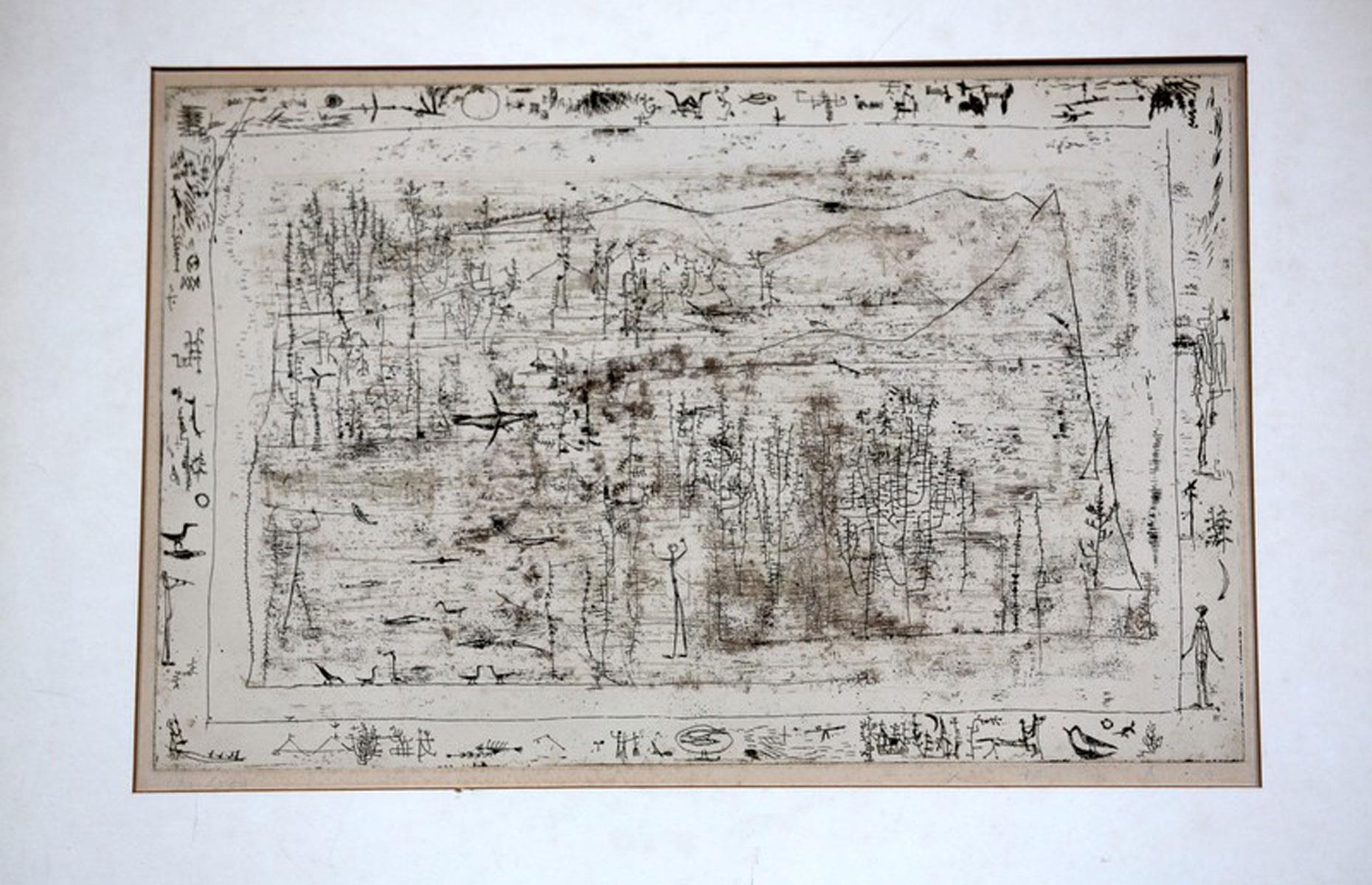 In January 2018, Cheryl Conroy Warren, a former antiques shop owner from Milford, Connecticut, learned this etching discovered by her late father in a dumpster on the Yale University campus 17 years ago was worth up to $15,000 (£11.5k).
Features 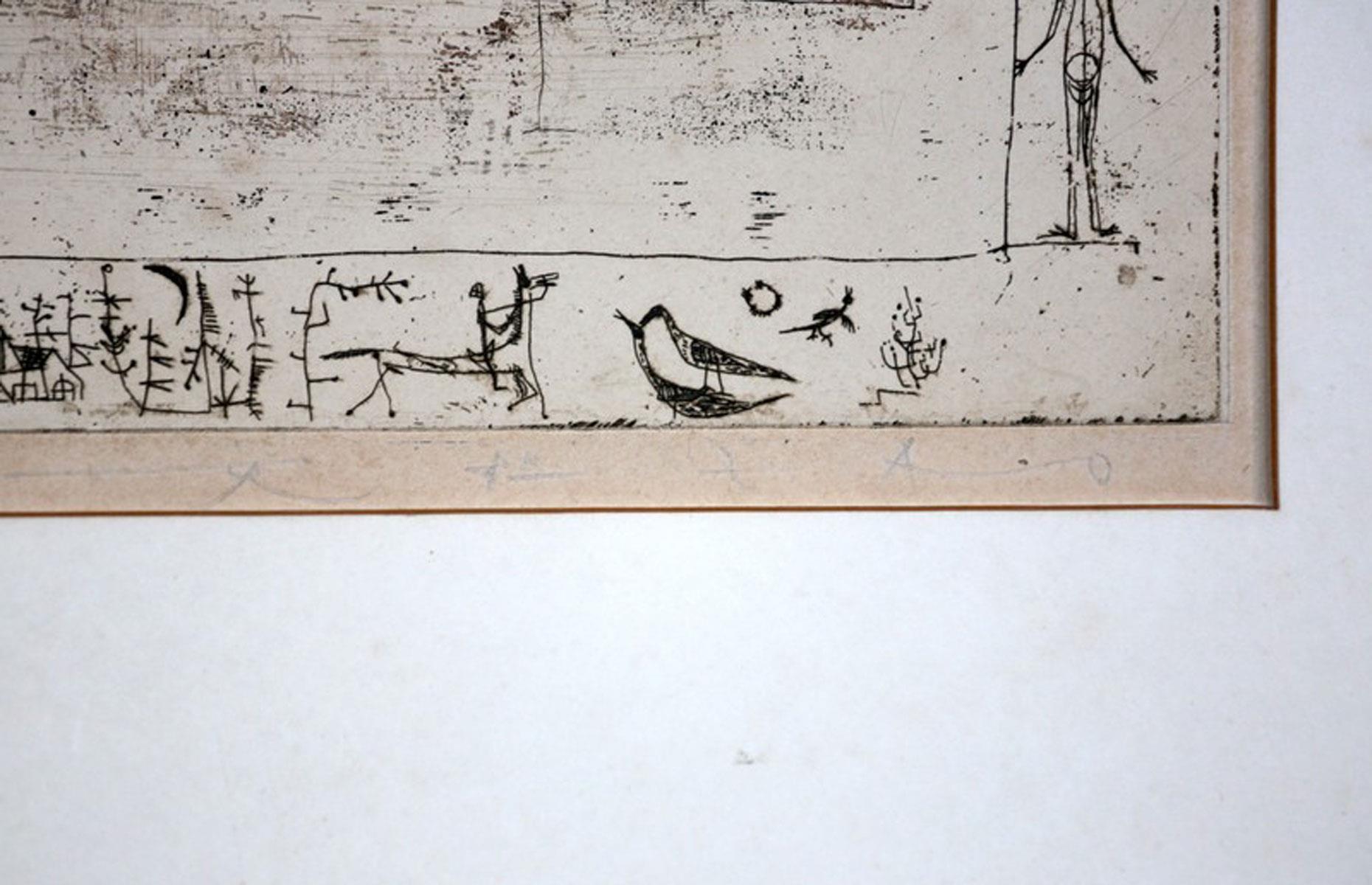 Though knowledgeable about antiques, Warren couldn't identify the artist and assumed the piece was pretty much worthless. It was stashed away and forgotten about until late 2018 when Warren made a beeline for the Antiques Roadshow TV show, which was shooting in Harrisburg, Pennsylvania. Warren was astonished to discover the etching is a 1951 work by legendary Chinese-French artist Zao Wou-Ki. The retired antiques dealer said she would use the proceeds from the etching sale to treat her mother to a new kitchen. 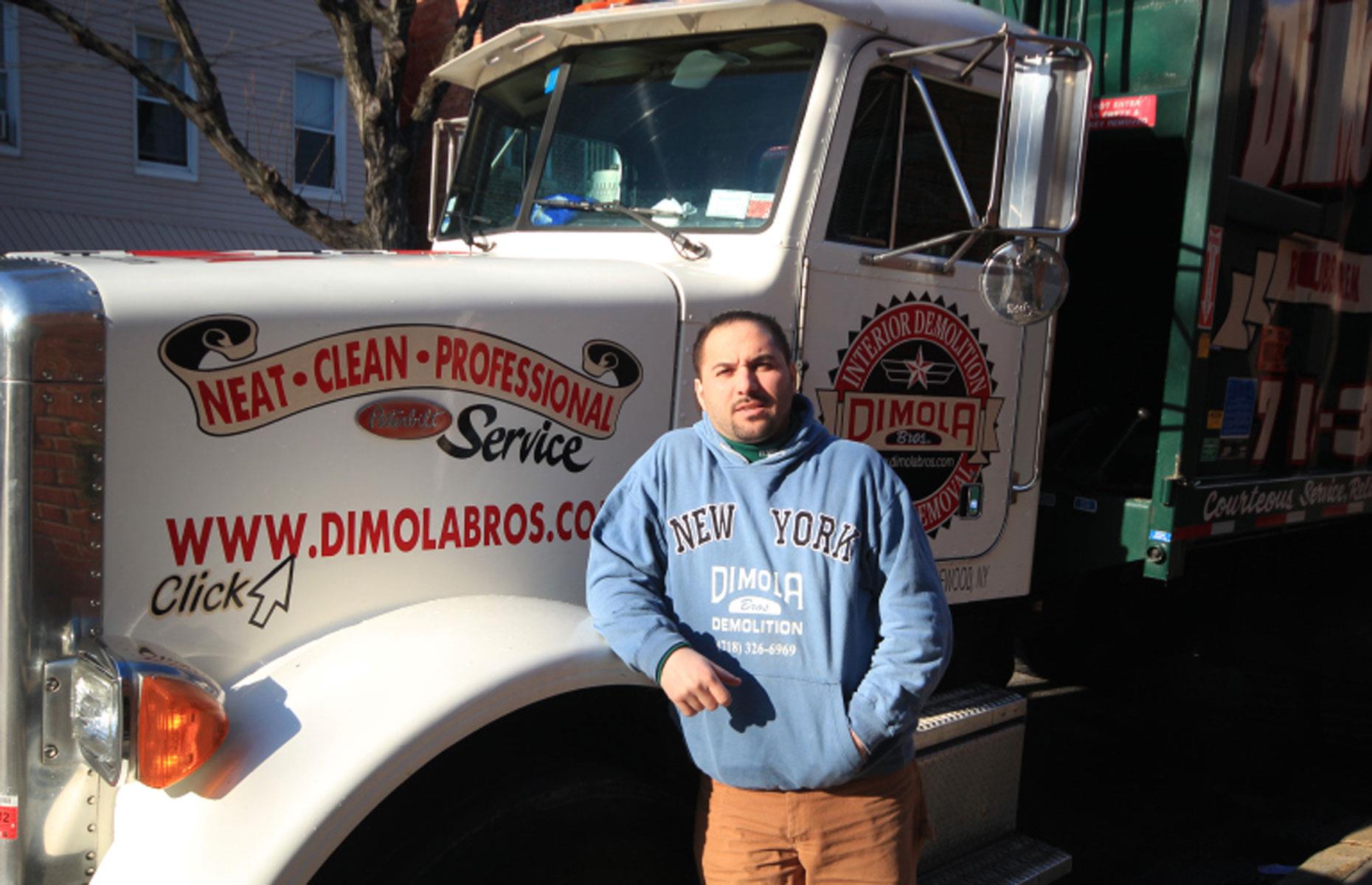 New York junk removal specialist Nick DiMola had zero clue the old trash barrel he found when he was clearing out a SoHo apartment and studio in 2004 was filled with ancient Mayan artefacts worth thousands of dollars.
Features 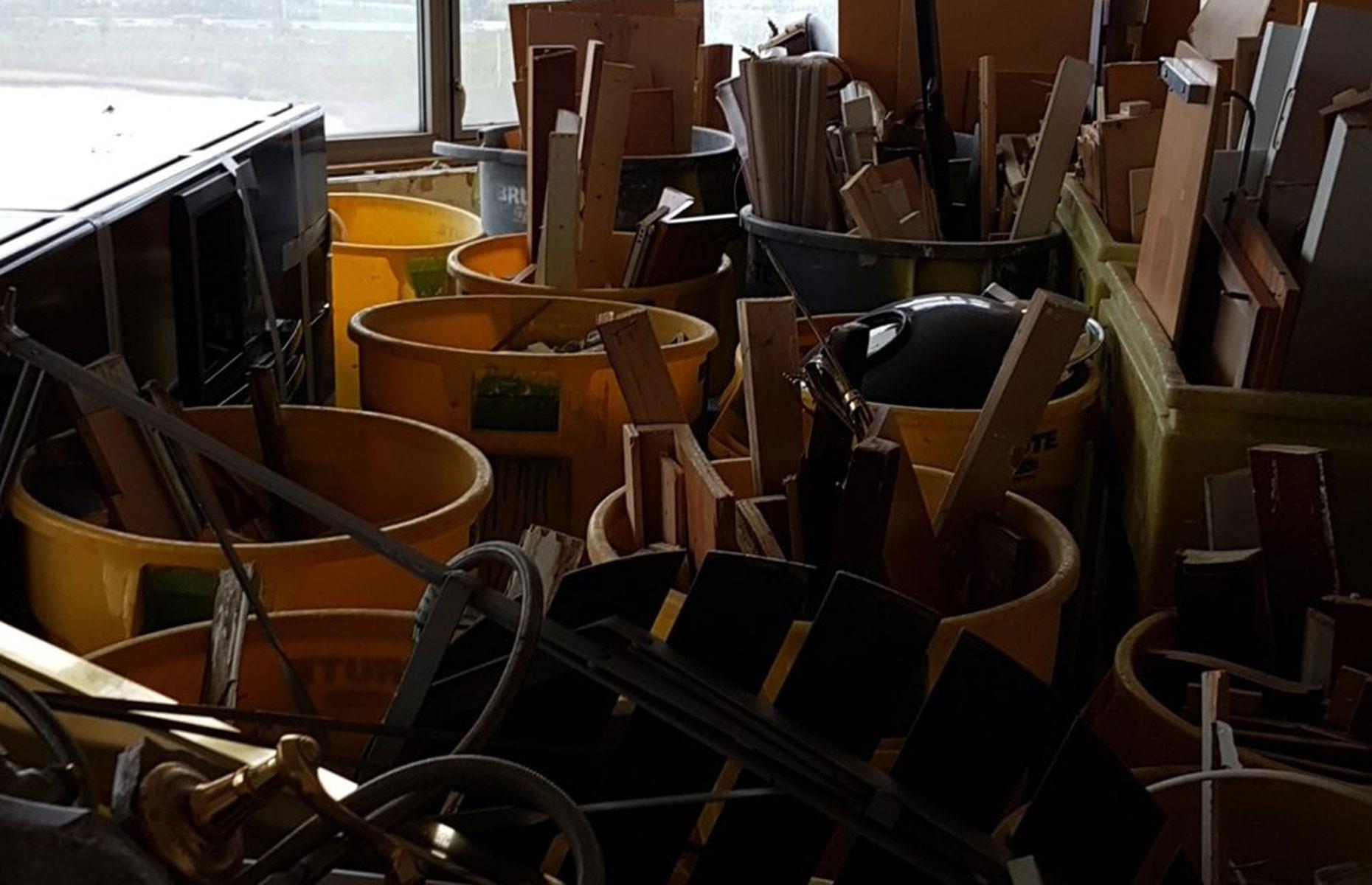 DiMola was paid $4,500 (£3.45k) to clear out the space, which belonged to the late abstract artist Clinton Hill. The 2,500-year-old artefacts had been stored away in the barrel by mistake and labelled as garbage. DiMola moved the barrel to a warehouse, where it remained undisturbed for five years. In 2009, DiMola decided to get rid of the barrel but, fortunately for him, he opened it and discovered the hidden haul of ancient figurines, bowls and jugs. Given DiMola was authorised to dispose of the barrel, he got to keep the artefacts, which were valued at $16,500 (£12.7k). 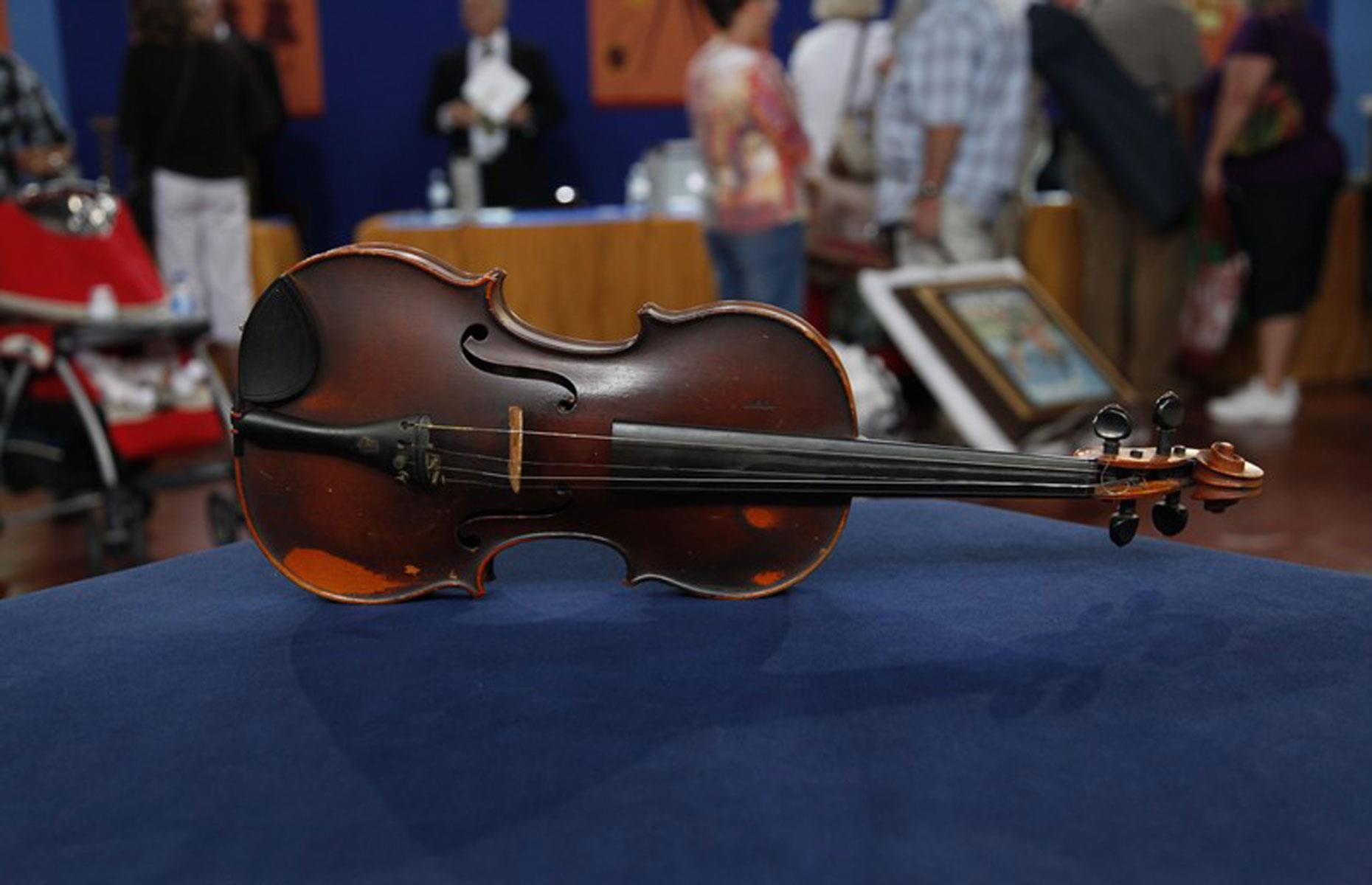 Another US Antiques Roadshow gem, this exquisite violin by renowned Italian maker Giuseppe Pedrazzini was the star of the season 17 premiere, which was filmed in Corpus Christi, Texas and aired in 2013. 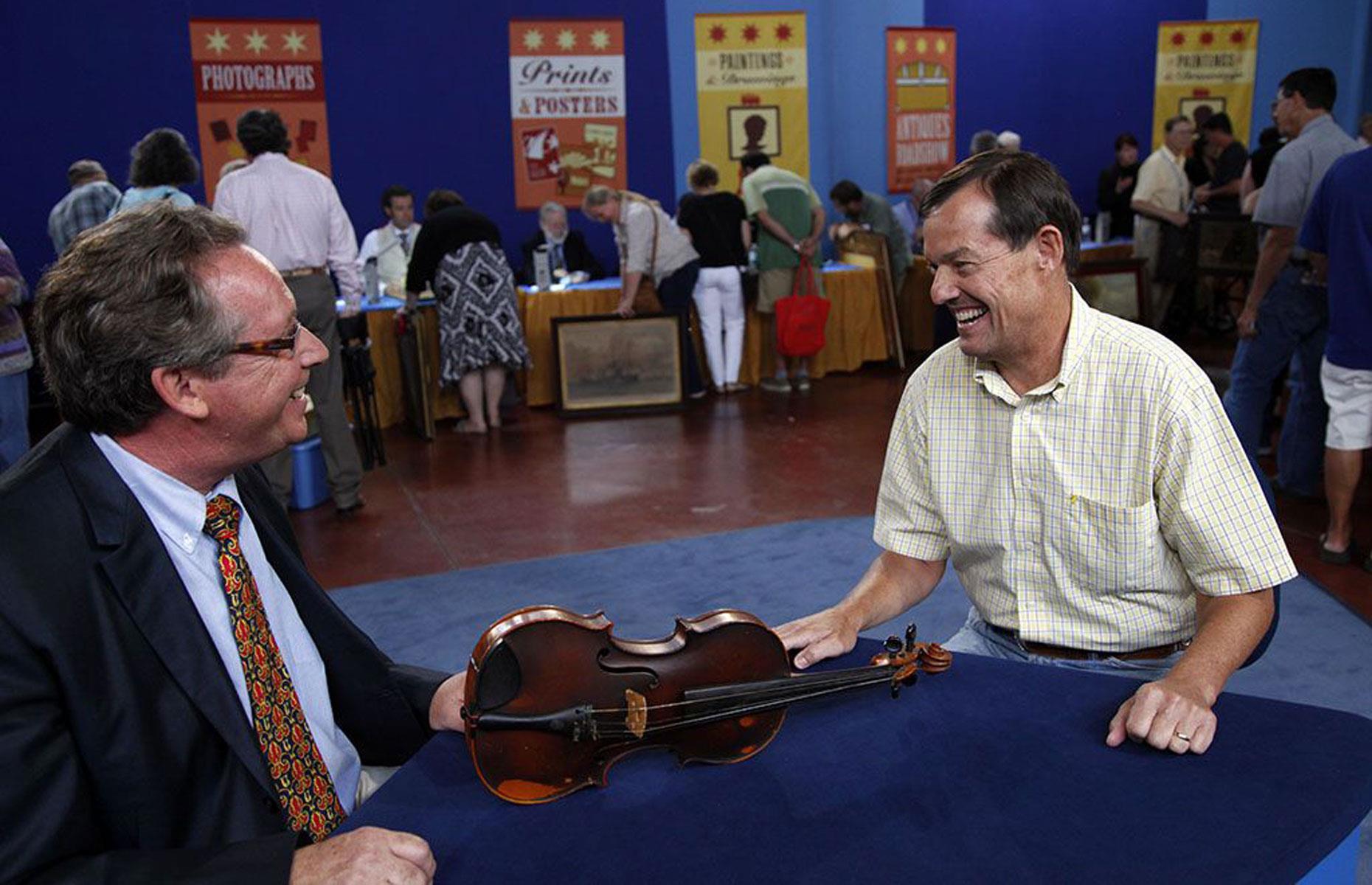 The violin was brought in by a man who, some years previously, had been driving in San Antonio with his wife when they noticed the beautifully crafted instrument in a pile of trash, and thought they could use it for spare parts to repair a cheap violin they owned. Thankfully, the pair decided to hold on to the instrument rather than break it up, and the man was delighted to learn the violin, which was meticulously handmade back in 1922, was worth up to $50,000 (£38.4k).
Features 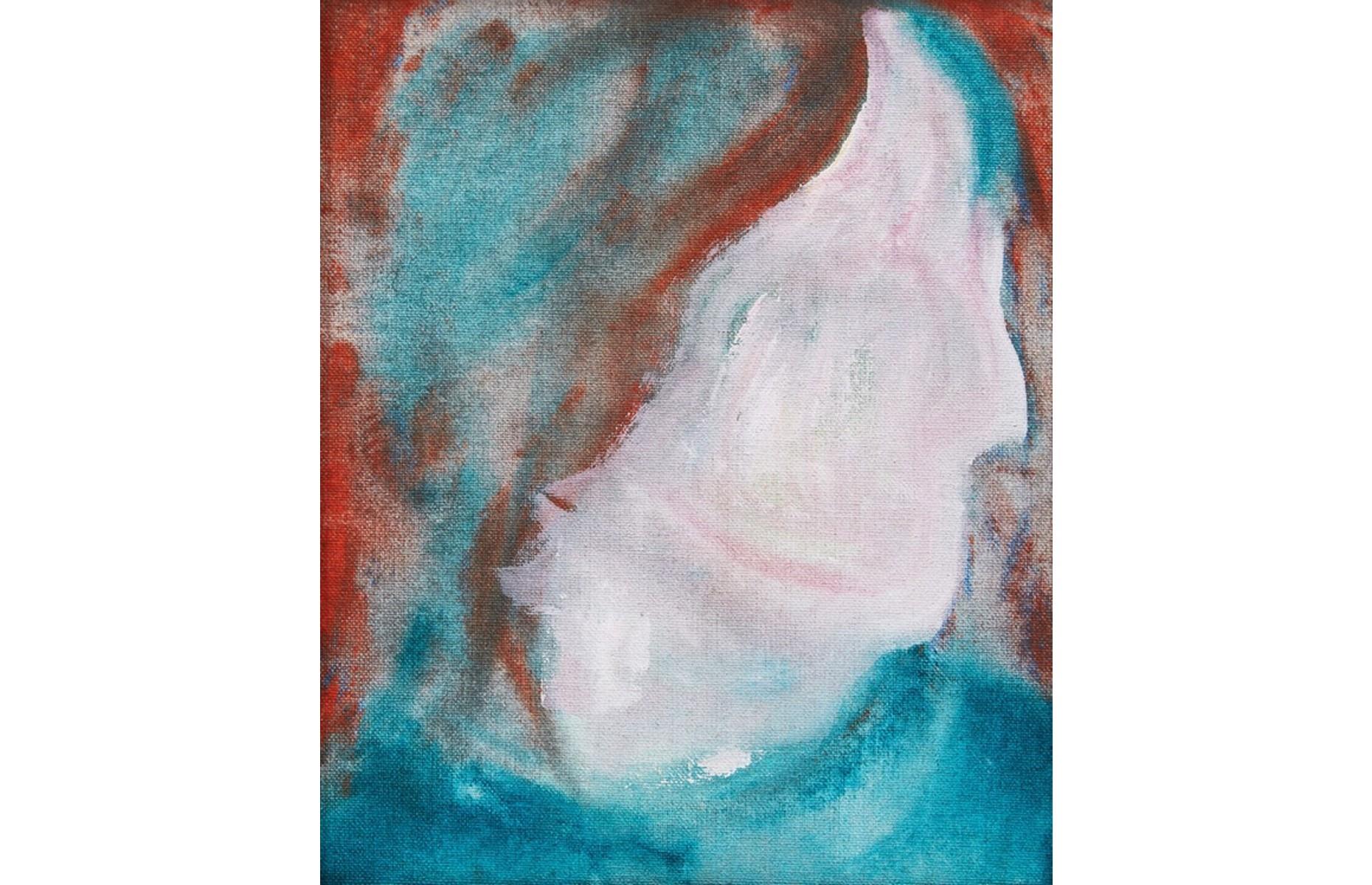 A painting by David Bowie

This painting was at a landfill site in Ontario, Canada, where a woman snapped it up for CA$5 ($3.95/£2.83). It’s not known whose face inspired the semi-abstract acrylic portrait, but the artist behind the artwork was identified as none other than the late music icon David Bowie.
Features 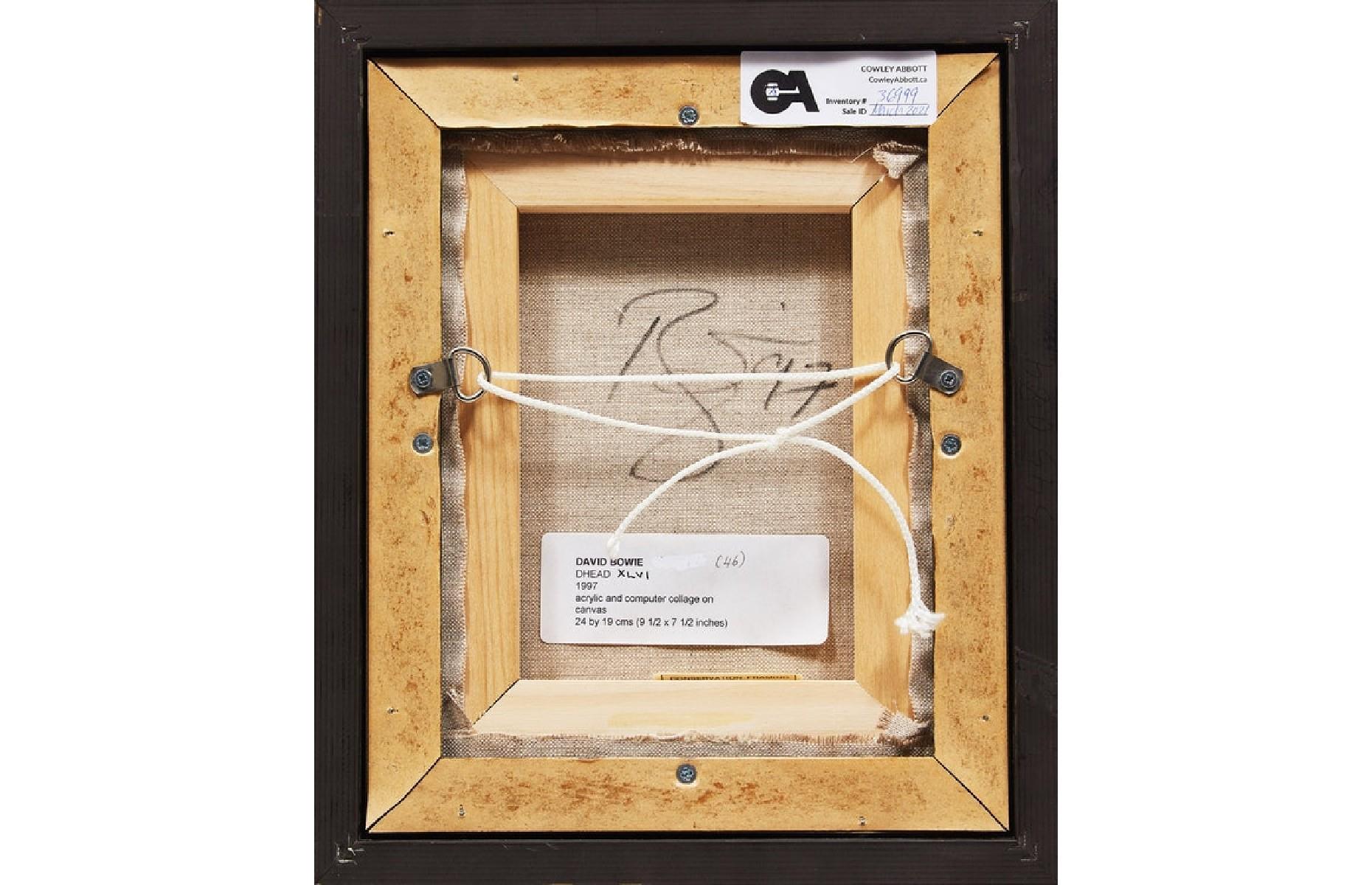 A painting by David Bowie

The signature scrawled on the back of the canvas proved it was a Bowie original, and it has since been authenticated by a Bowie autograph collector. The painting is number 46 of a 47-piece series by the singer called Dead Heads. The painting is now being auctioned online until Thursday. It was given a modest estimate of between CA$9,000 and CA$12,000 ($7.1k-$9.5k/£5.1k-£6.8k), but bidding eventually settled at CA$108,000 ($88k/£63k). 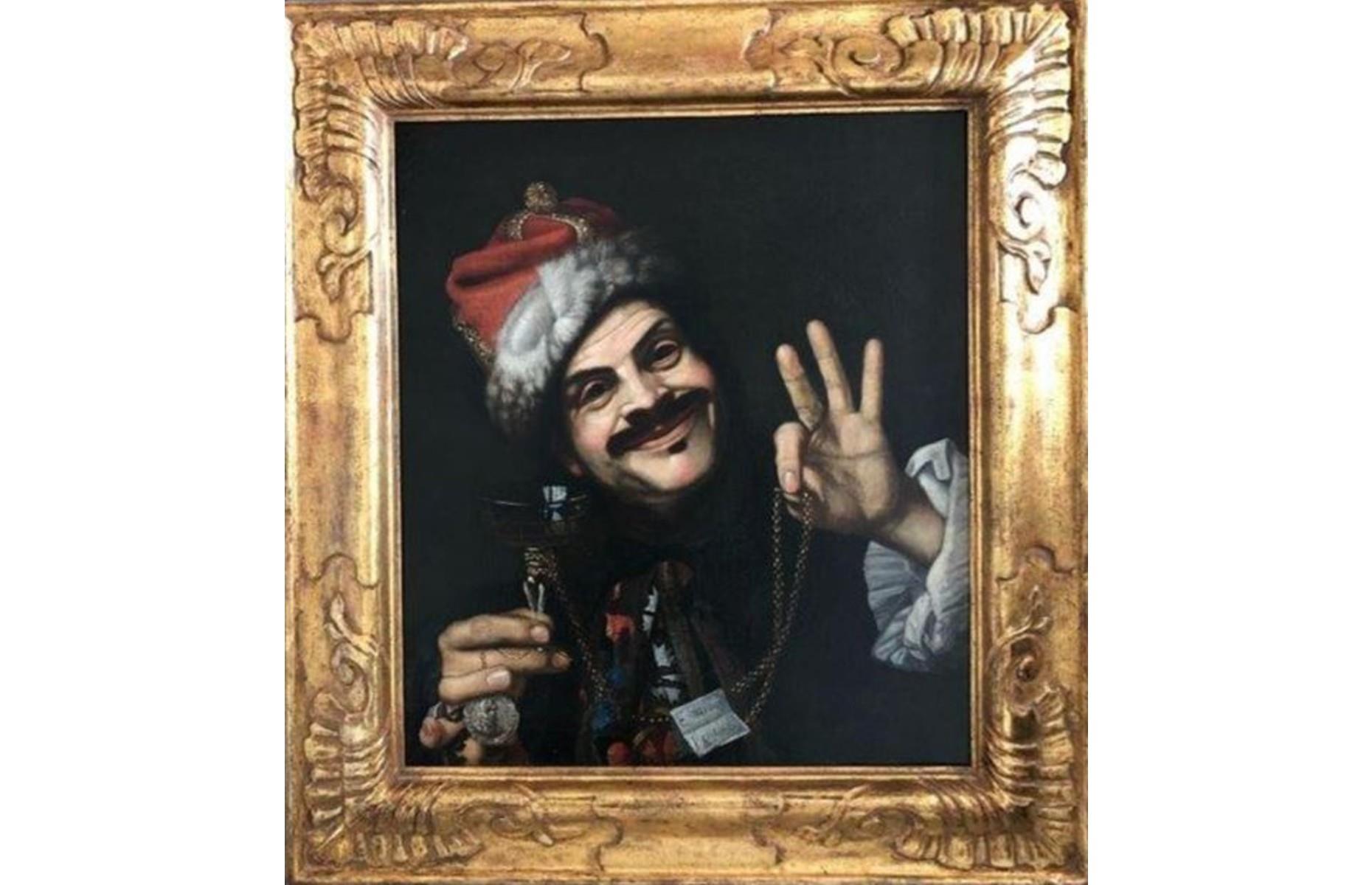 A man found more than he had bargained for when he stopped off at a German motorway service station last month and discovered two framed 17th-century oil paintings in a skip.
Features 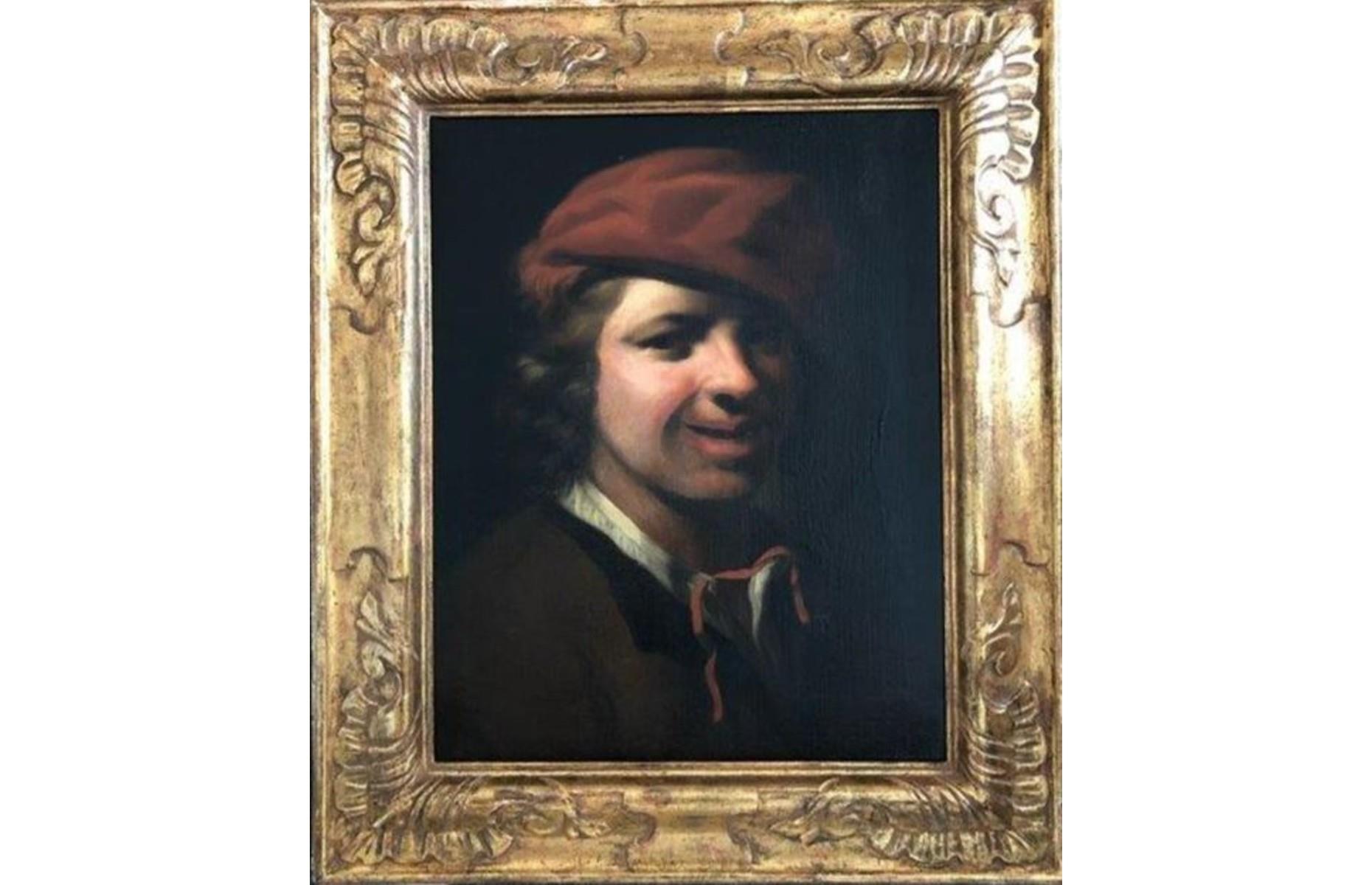 After finding the paintings on the A7 south of Wuerzburg in Bavaria, the driver handed the artwork to authorities in Cologne and further investigation has revealed that they are original works by Italian painter Pietro Bellotti (previous entry) and Dutch artist Samuel van Hoogstraten (pictured). Both 350-year-old artworks are believed to be valuable, with a Hoogstraten painting that depicts a shepherdess having sold for £50,062 ($70k) at British auction house Bonhams in 2019. Police are appealing for information as to who owns the artwork and how it arrived on the roadside, but their sudden appearance remains a mystery for now… 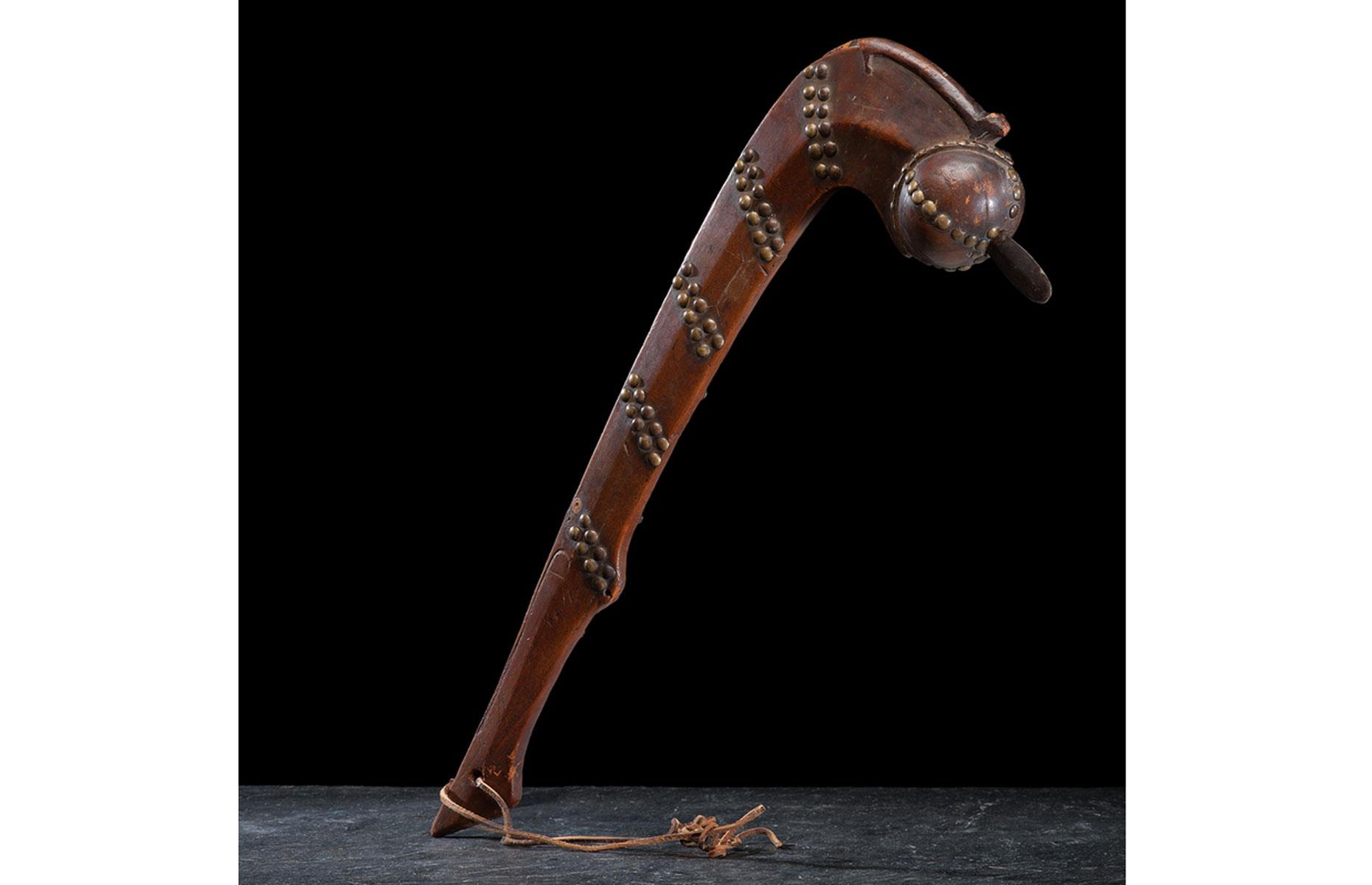 Native American antiques have surged in price in recent years. The seller of this Otoe ball club, which dates from around 1840, couldn't believe his luck when the wooden weapon sold for $102,000 (£78.3k) at a Cowan's Auction sale in Cincinnati in 2016.
Features 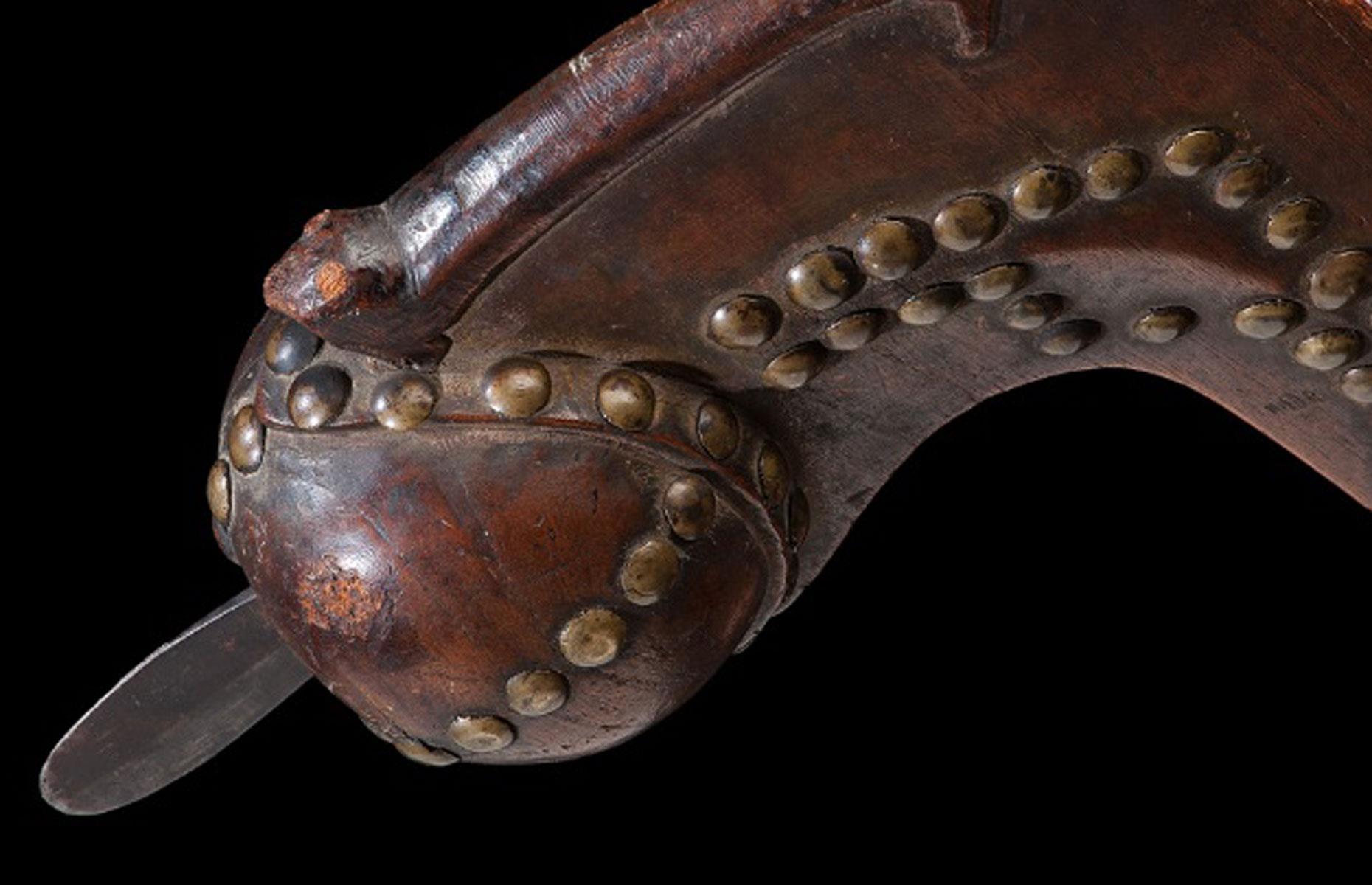 The seller had inherited the ceremonial war club from a close friend whose grandfather found it in a dump decades ago. The man had an inkling the club could be valuable but had no idea it would fetch so much money. A particularly stunning example of Otoe craftsmanship, the 23-inch antique club was carved from a single piece of walnut, and features 178 square-shanked brass tacks and a underwater panther motif.
Features

In June 2010, a San Diego woman bowled over the Antiques Roadshow textiles specialist when she brought along this old rug for appraisal. Several years prior, a neighbour was having a clearout and had dumped a sofa on the street, and the woman's daughter had just moved into a new place and was in need of a couch. Not forgetting her manners, she asked for permission to take the sofa and the homeowner duly obliged, and mentioned he'd also put some rugs in the trash she might like. 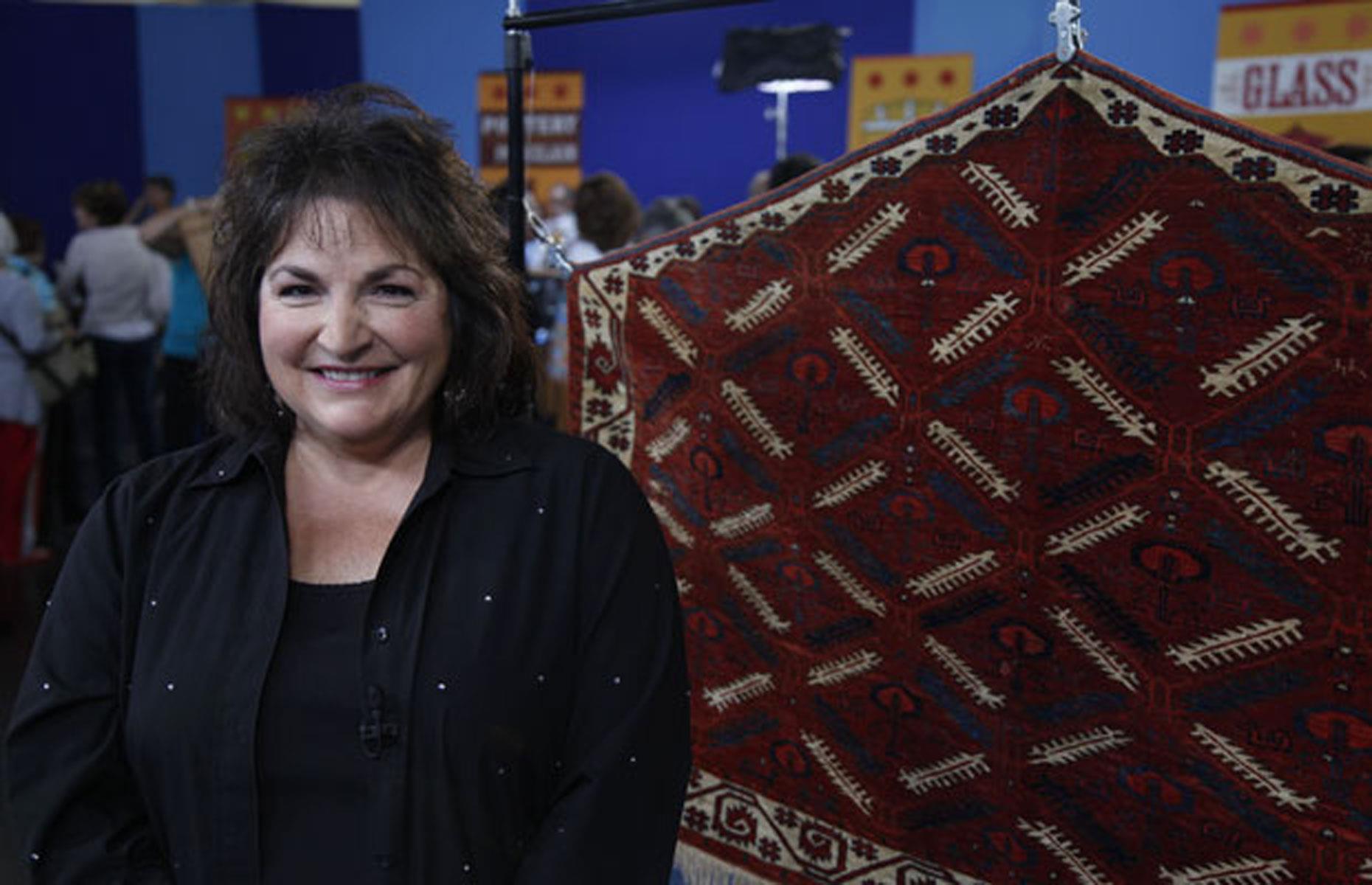 Her politeness paid off handsomely. The rug she retrieved from the garbage was woven circa 1800 in Turkmenistan and is highly sought after among collectors. It was valued at a cool $150,000 (£115k).
Features
19 of RMY Auctions/PD-1923/Wikimedia Commons
List View Gallery View Full screen

In 2016, a family from the southern US who have chosen to remain anonymous were sifting through their late great-grandparents' belongings and came across an old paper bag, which they assumed was filled with trash. The bag was destined for the dump but one of the family members checked the contents before ditching it and pulled out seven Ty Cobb baseball cards, along with some old postcards and papers.
Features 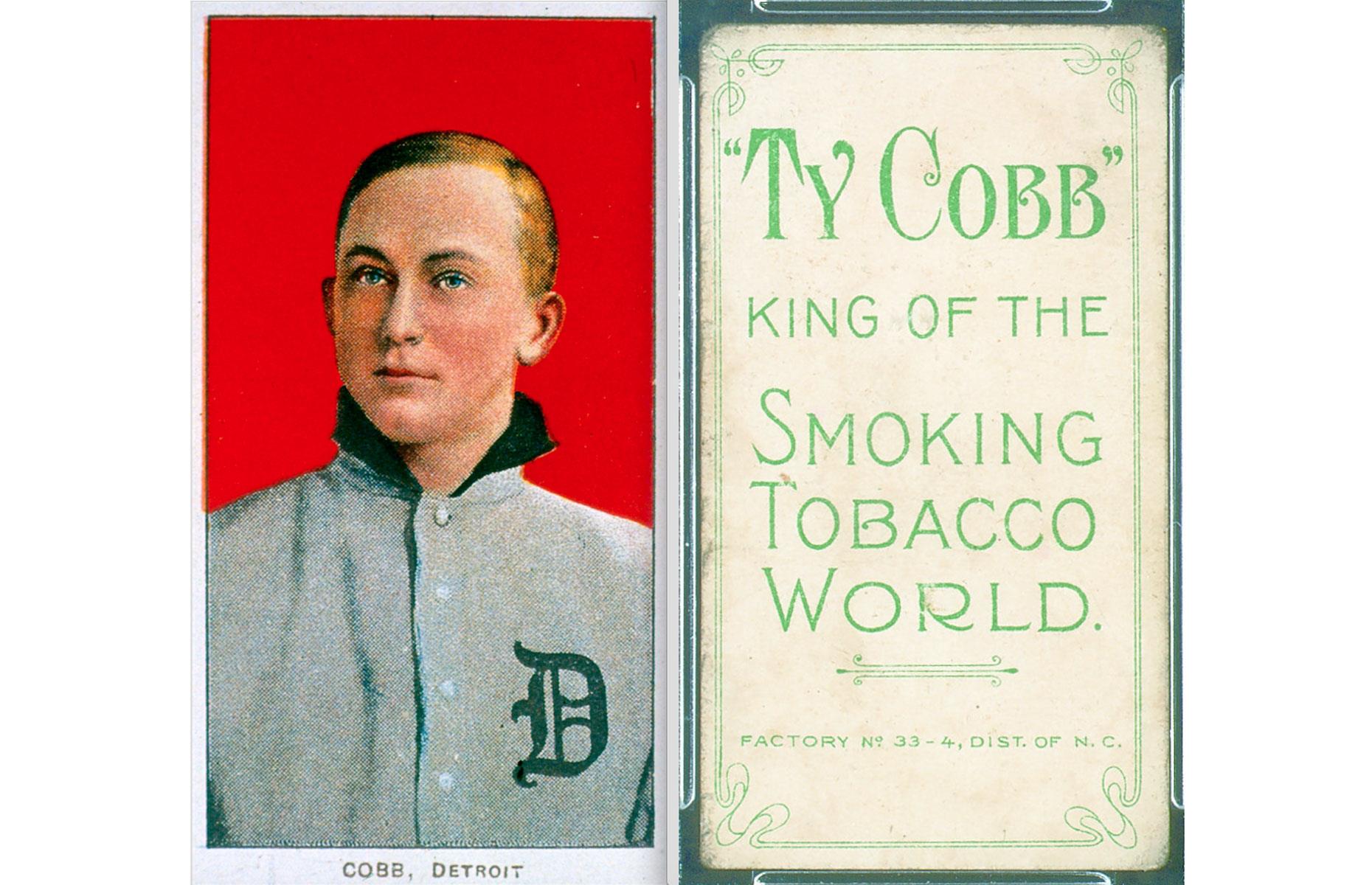 The family had a vague notion the cards could be worth something, and they weren't wrong. Dubbed 'the Lucky Seven Find', the ultra-rare cards date from the early 1900s and are worth more than $1 million (£770,000).
Features 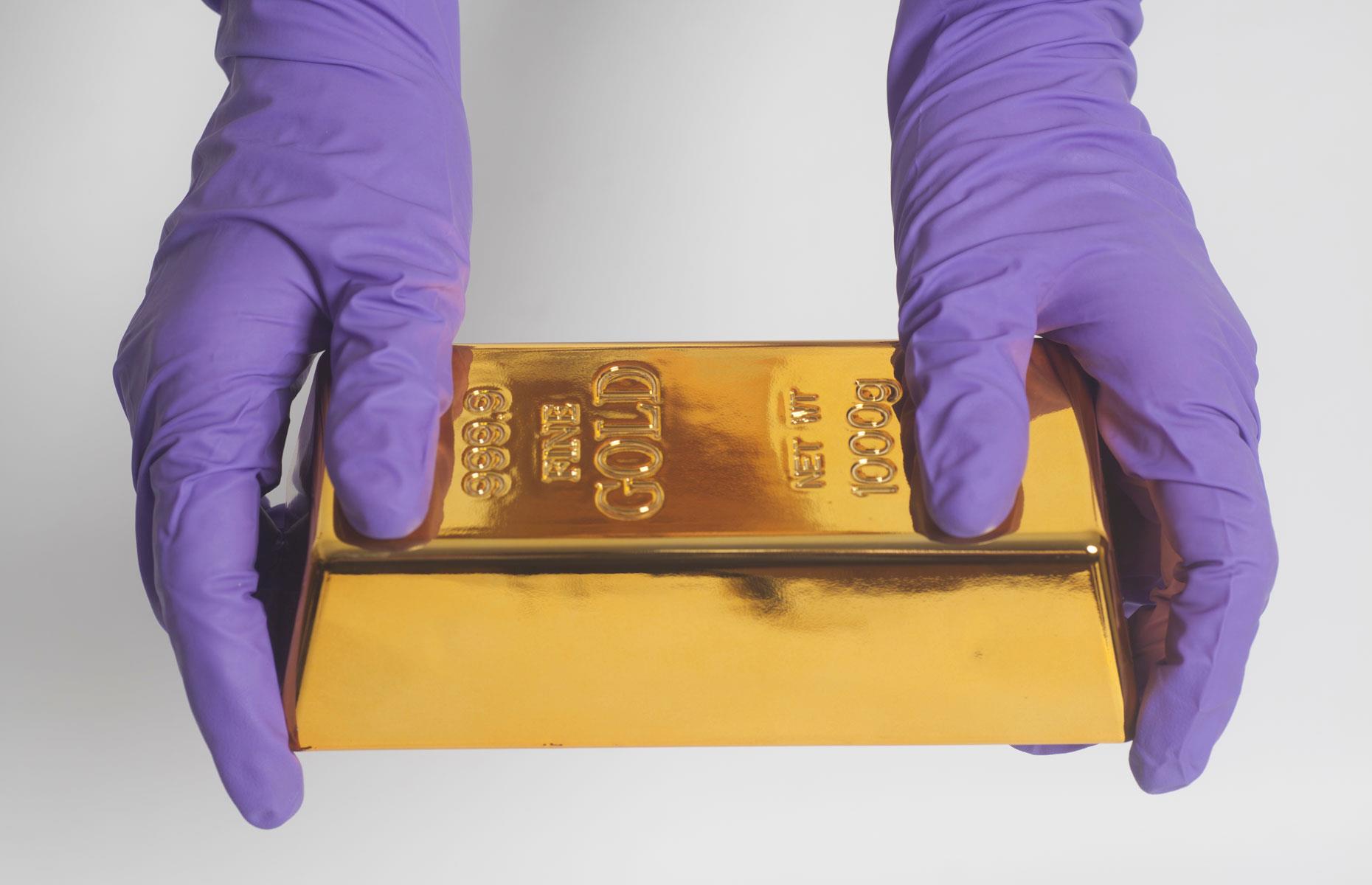 Gold bars dumped at an airport

In 2018, an unnamed cleaner at South Korea's Incheon International Airport found seven gold bars worth $330,000 (£253k) in a bin. The airport cleaner found the bars wrapped in newspaper and handed them over to the police. The owner was identified but refused to claim the gold, implying the bullion might have been obtained illegally and dumped to evade cops or customs.
Features 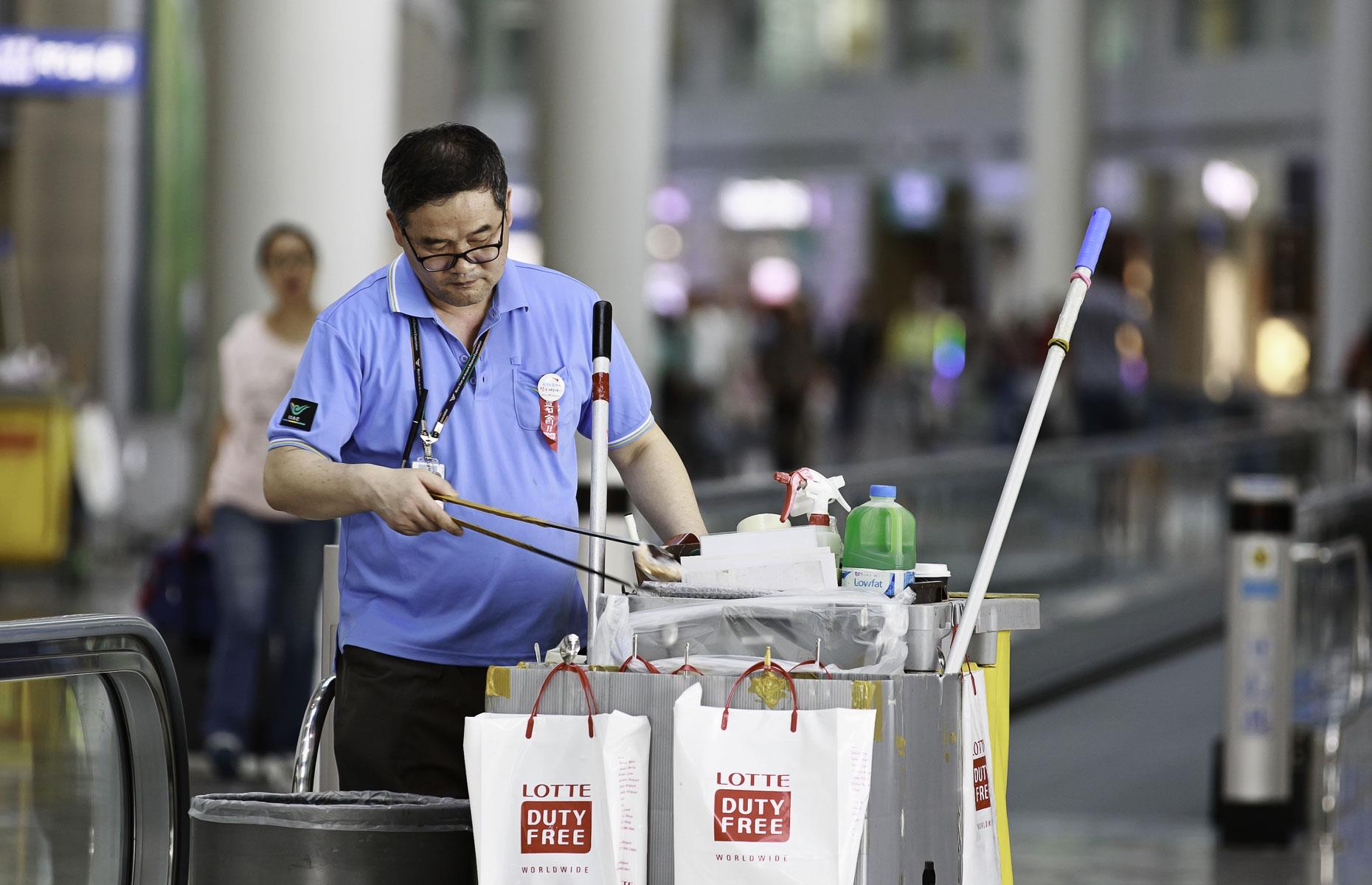 Gold bars dumped at an airport

Due to South Korea's 'Finder Keepers' law, it was initially thought that the cleaner could be granted ownership of the gold bars if the owner failed to claim them within six months. However, it has since been decided that the cleaner could not claim any money from them, because they were “working as airport staff and it is part of the cleaner’s job to find lost things”. 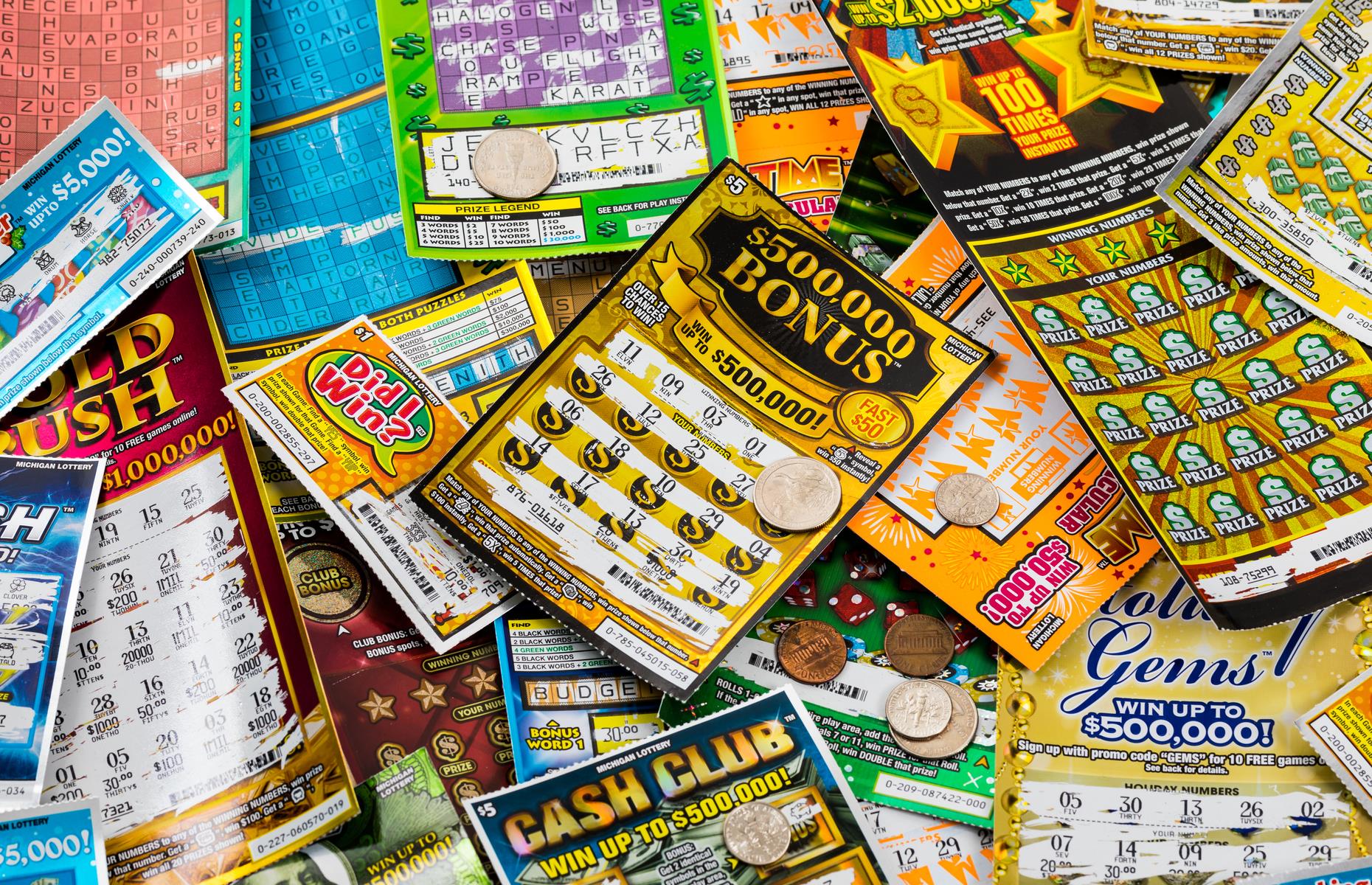 Edward St. John, an 83-year old Massachusetts man, hit the jackpot when he found a winning lottery ticket while searching through garbage bins. Delighted to discover that the ticket had won him $1 million (£770,000), he was ready to collect his prize – until the family of the original ticket holder showed up with a lawsuit
Features 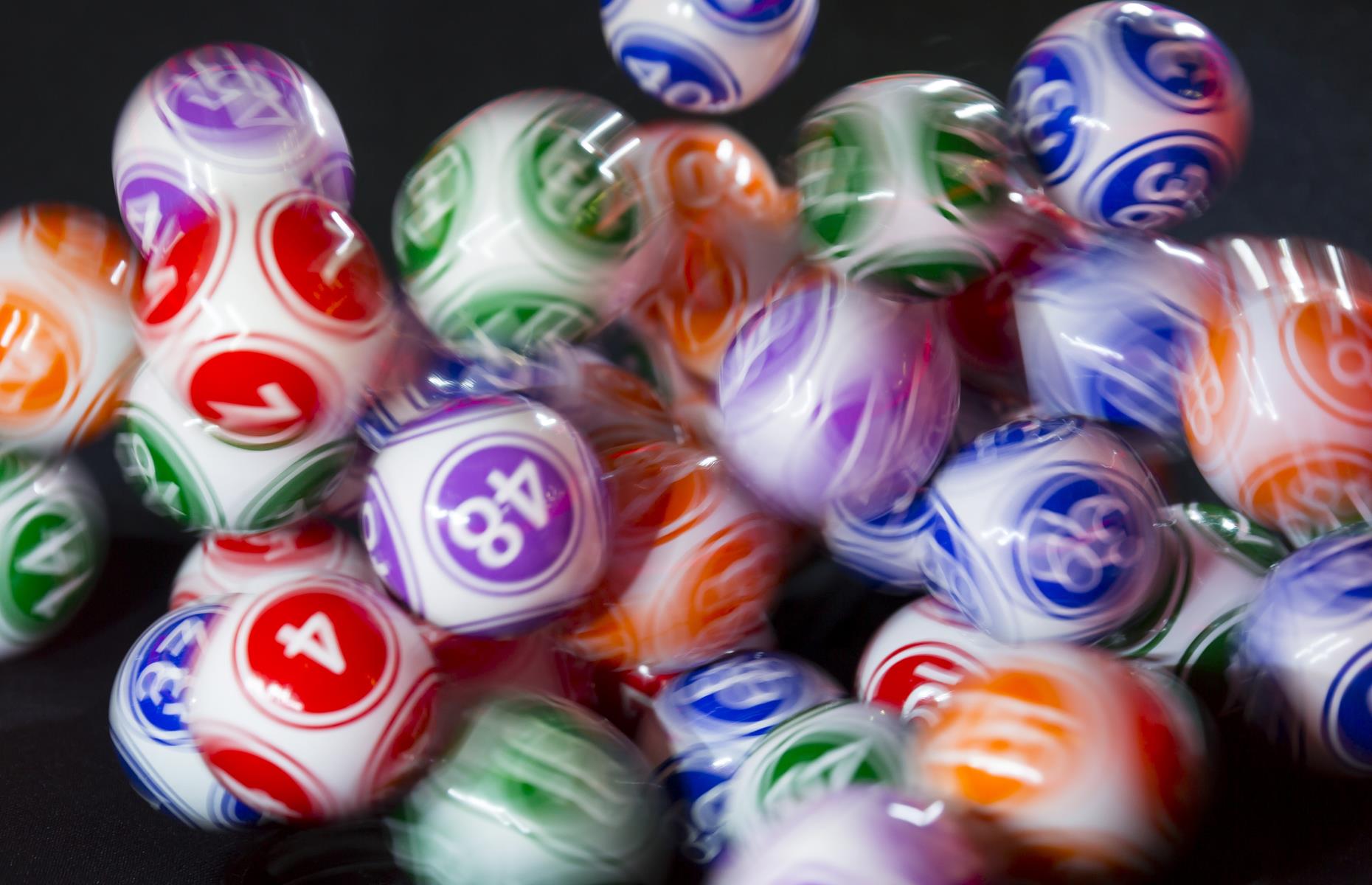 After nearly a year of battling it out in court, St. John agreed to take home $140,000 (£107.4k) of the winnings while the estate of Kevin Donovan, the original ticket holder, got the rest of the winnings.

Stunning hidden treasures discovered in the most unlikely places 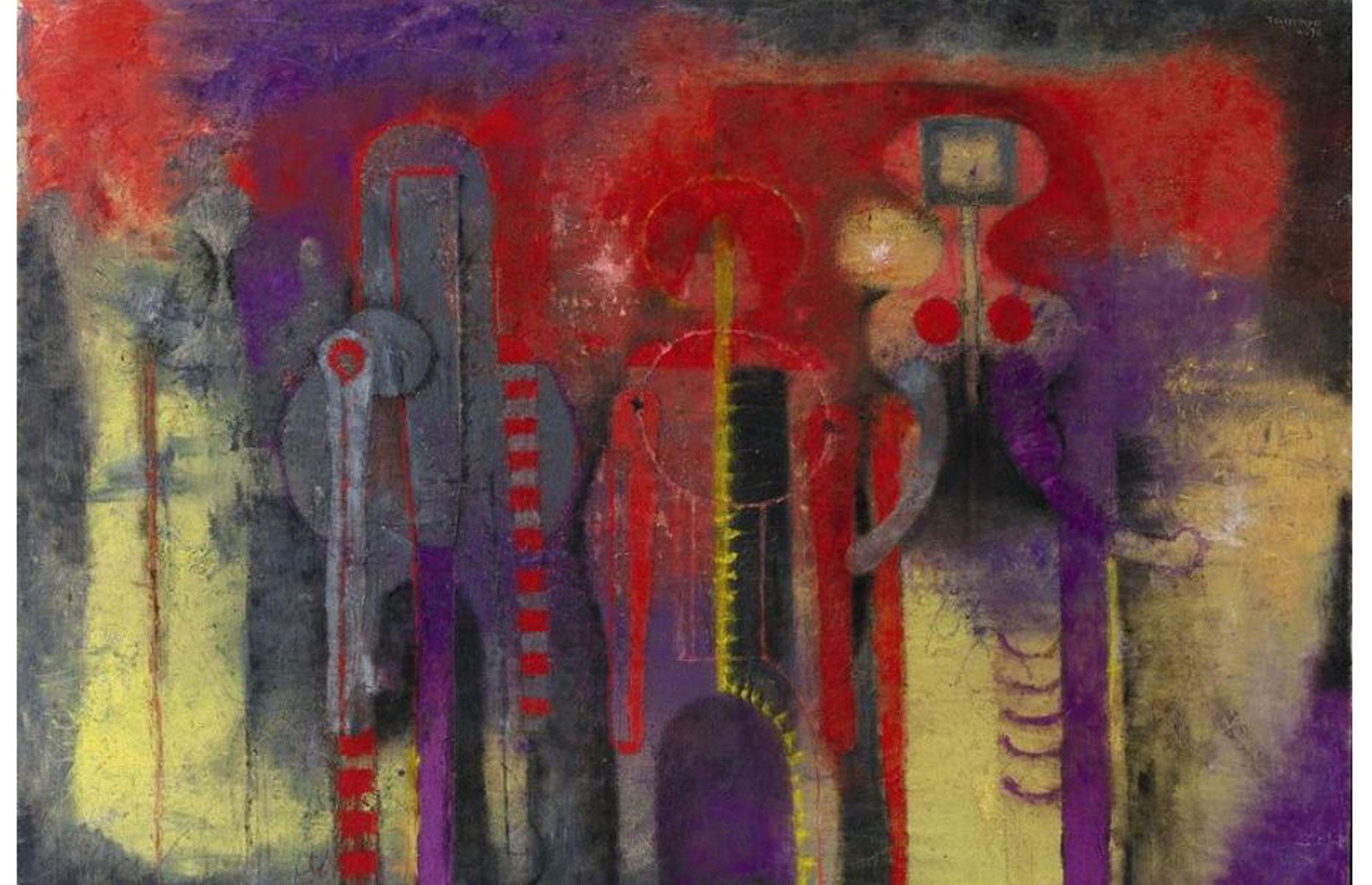 Manhattan resident Elizabeth Gibson was enjoying a leisurely stroll in New York's Upper East Side one morning in 2003 when she spotted a vividly-hued canvas lying on a pile of trash. Gibson grabbed the painting, took it back to her apartment and got sleuthing. The savvy New Yorker's detective work led her to the Antiques Roadshow FYI website, where she discovered the artwork was a 1970 painting called Tres Personajes (Three People) by acclaimed Mexican abstract artist Rufino Tamayo. 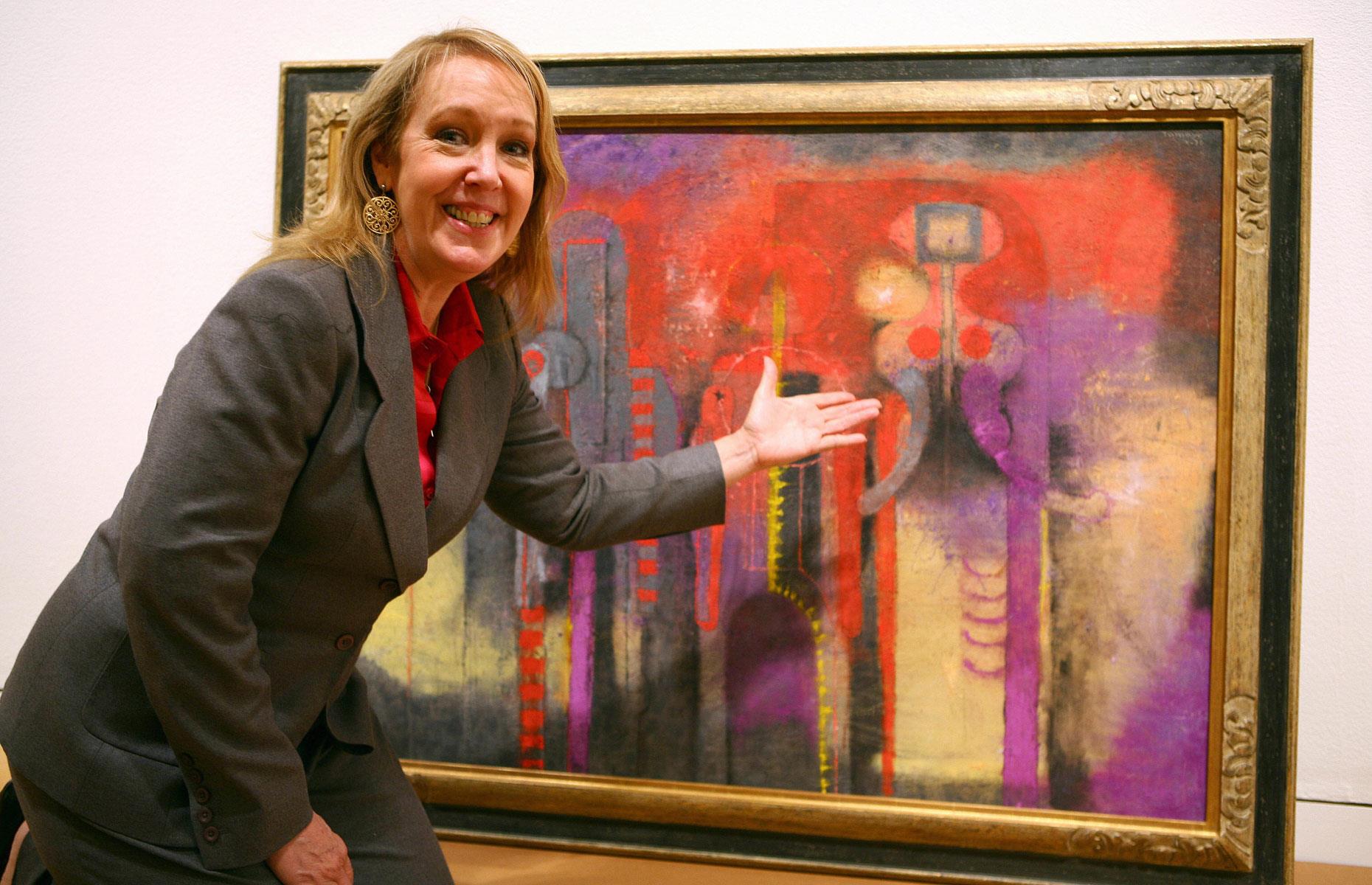 It transpired the painting had been stolen in 1987 from a Houston warehouse. Exactly how it ended up on a pile of trash in New York is anyone's guess. The painting was reunited with its rightful owner, and went on to sell for just over $1 million (£770,000), with Gibson receiving a cut of the proceeds as well as a $15,000 (£11.5k) reward. 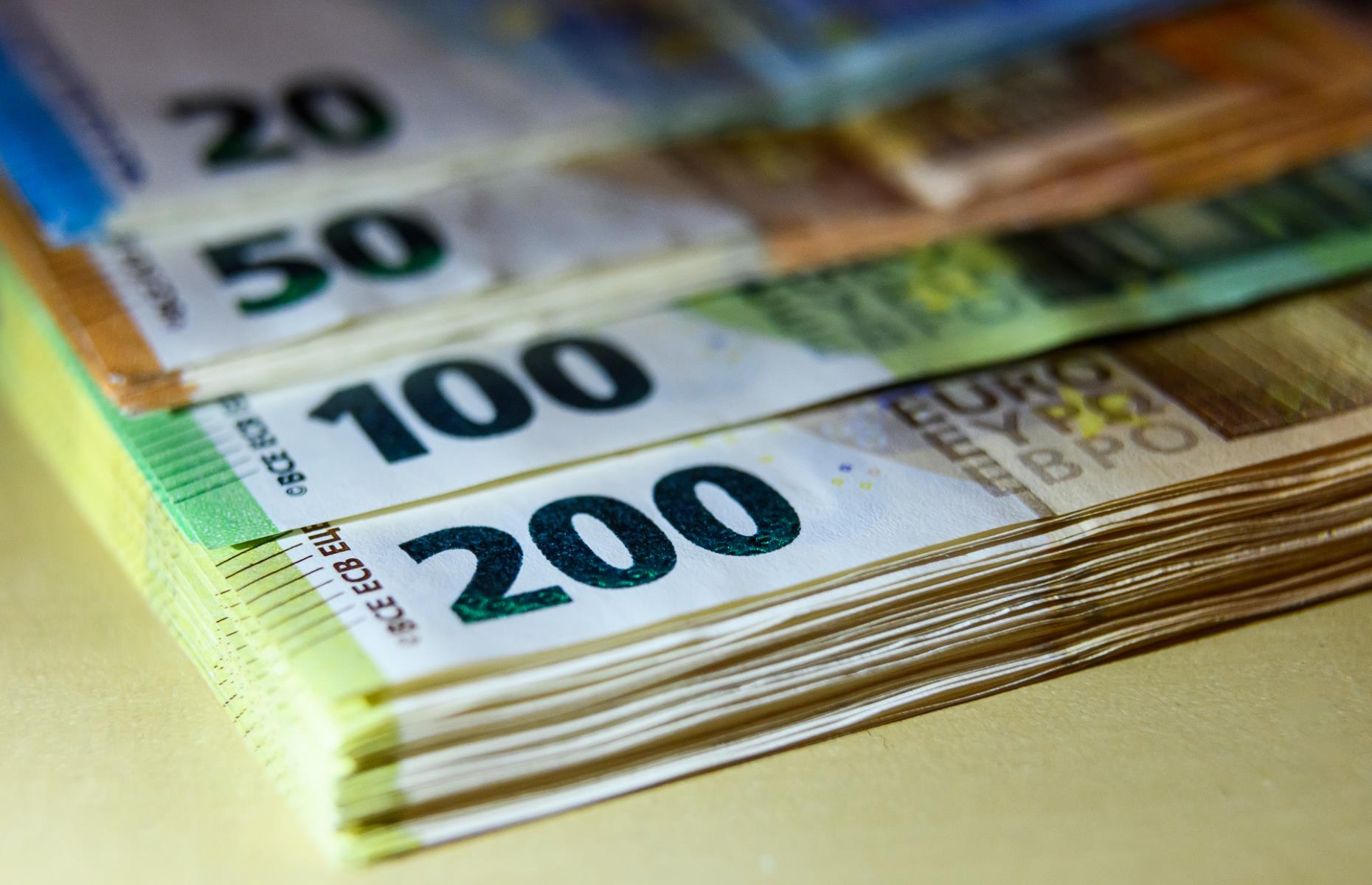 In June, a man discovered an elephant ornament stuffed with €85,000 ($100.8k/£72.7k) in cash in a rubbish collection in Bordeaux, France. Instead of just pocketing the cash, the man alerted local police, who used forensic identification to try to trace the money, which they thought might be linked to drug trafficking. However, the truth was a little simpler...
Features 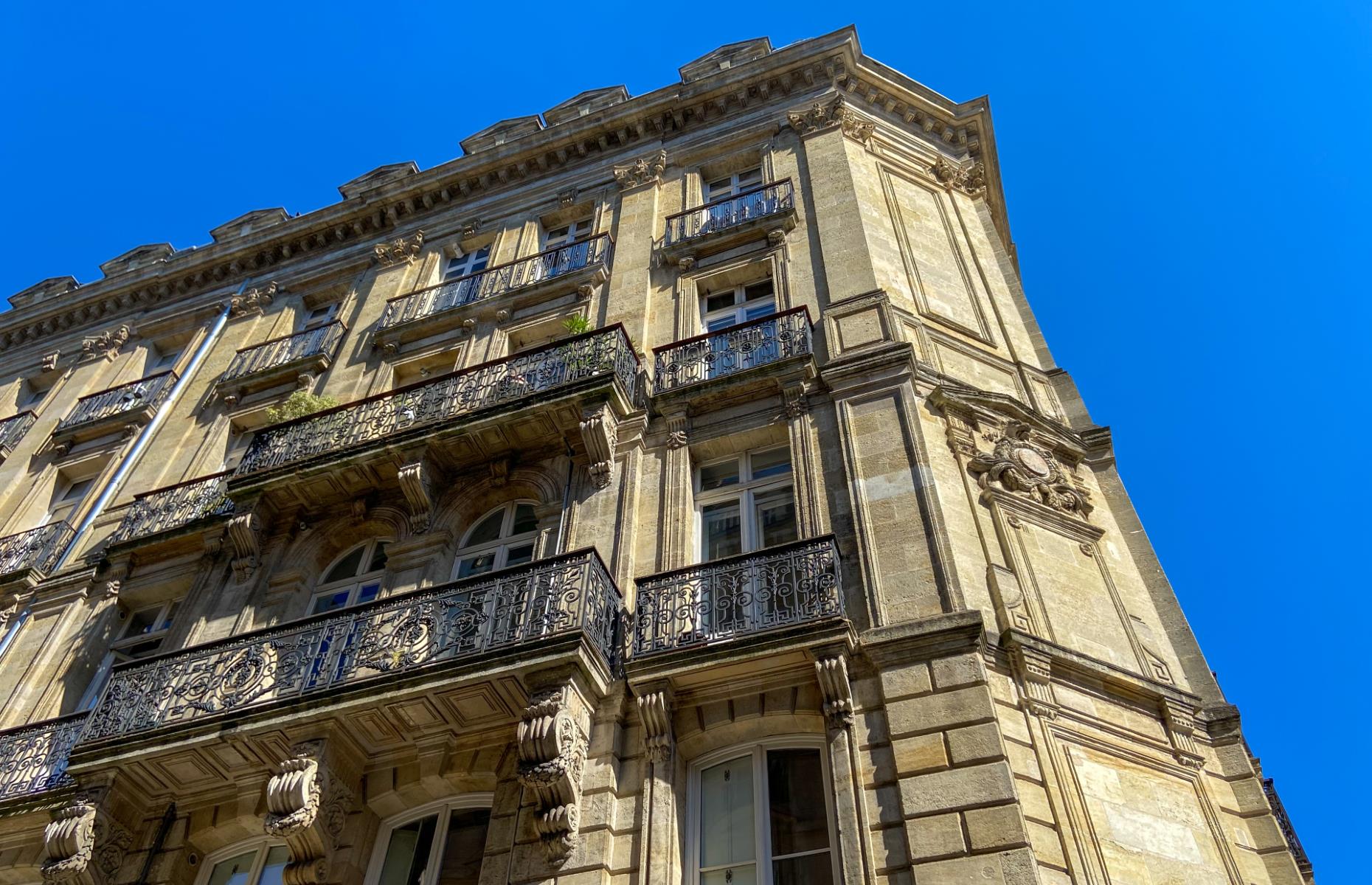 Six days after it was discovered, another man got in touch with the police after reading about what had been found and revealed that he had thrown the elephant money box away without checking its contents. The man had been clearing his parents' apartment after his mother died, and his father moved to an old people's home. He will hopefully be reunited with the money once he's proved his story stacks up.