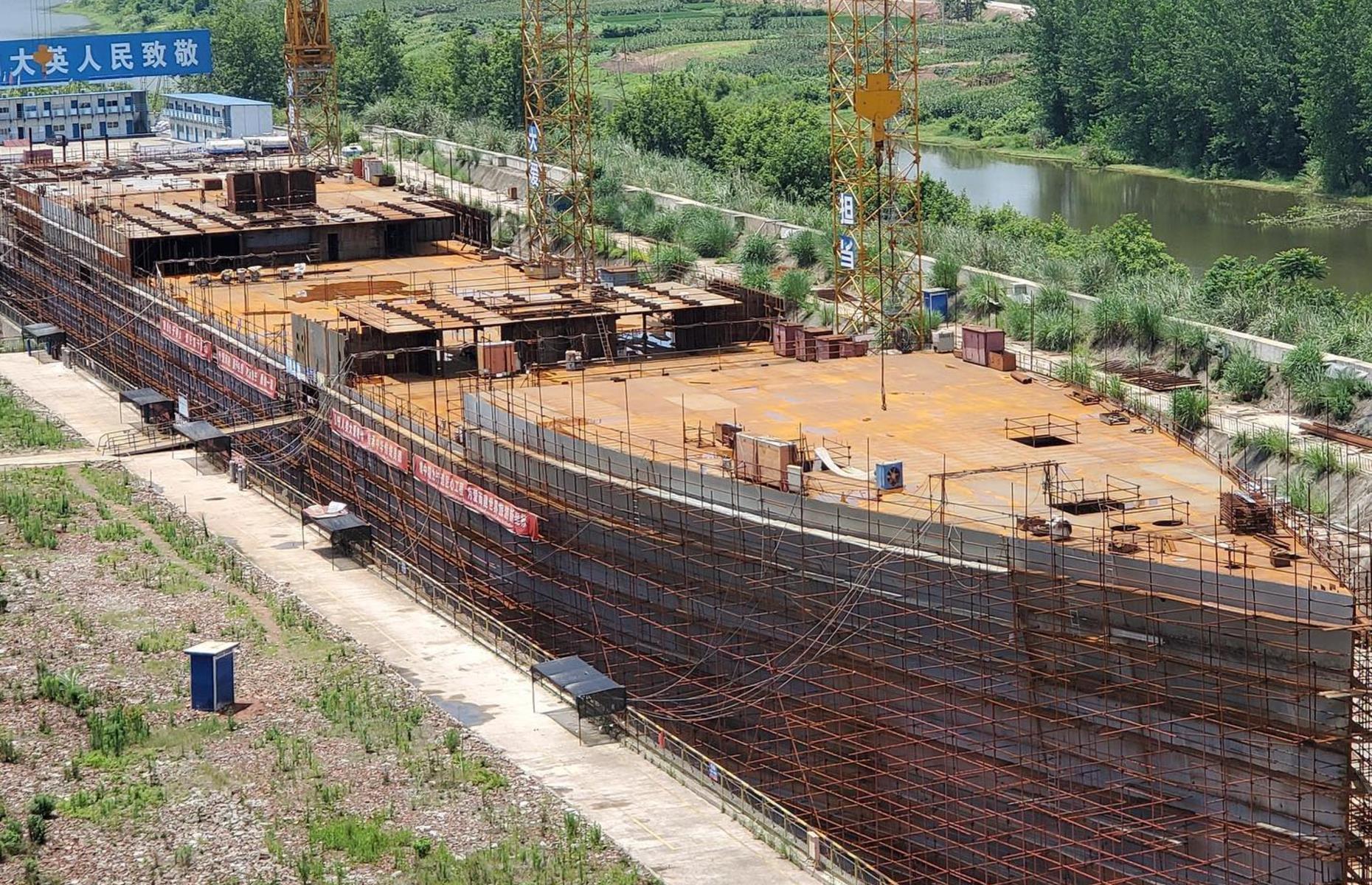 Stories behind not one, but two full-size Titanic replicas

More than a century after Titanic set sail on her ill-fated maiden voyage, we take a look at two extraordinary projects vying to recreate the iconic doomed ship: Australian billionaire Clive Palmer's Titanic II; and the Unsinkable Titanic, set to be the star attraction at the Romandisea resort in Sichuan, China. But will these projects ever set sail, or are they destined to disappear without trace? Read on to find out. All dollar values in US dollars unless otherwise stated.
Features

In April 2012 Australian mining billionaire Clive Palmer announced his plan to build Titanic II, a pretty much to scale seaworthy reproduction of the unlucky Edwardian ship, at an estimated cost of $500 million (£362m).
Features 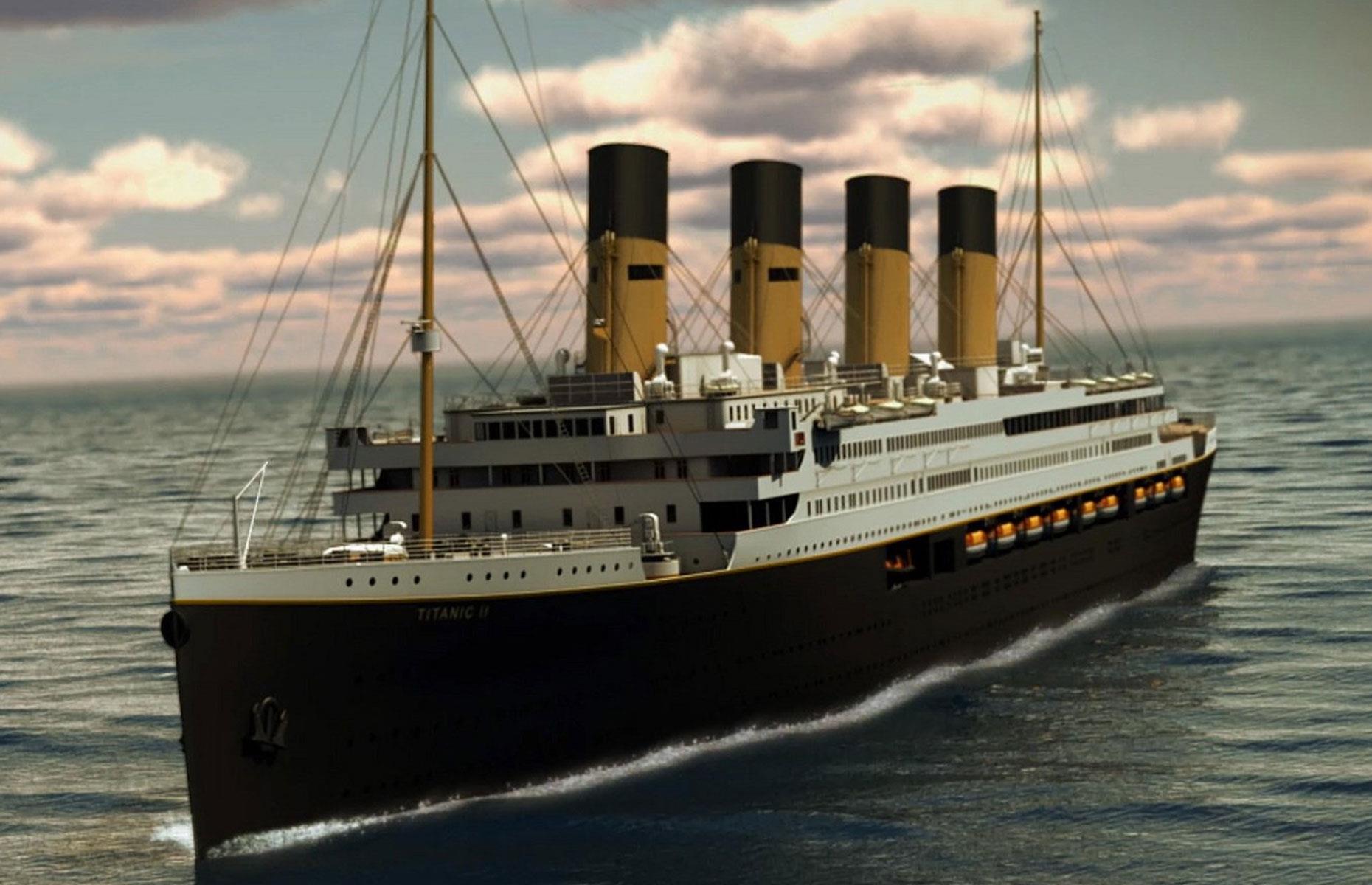 The Titanic II was billed as a historically accurate copy of the original ocean liner. Palmer and his shipping company Blue Star Line hired a team of historians, including Titanic expert Steve Hall, to help recreate the design of the nine-decked ship and its 840 rooms. Palmer appointed Finnish naval architecture firm Deltamarin to design the structure and German company Hamburg Ship Model Basin to oversee the liner's seaworthy and safety standards.
Features 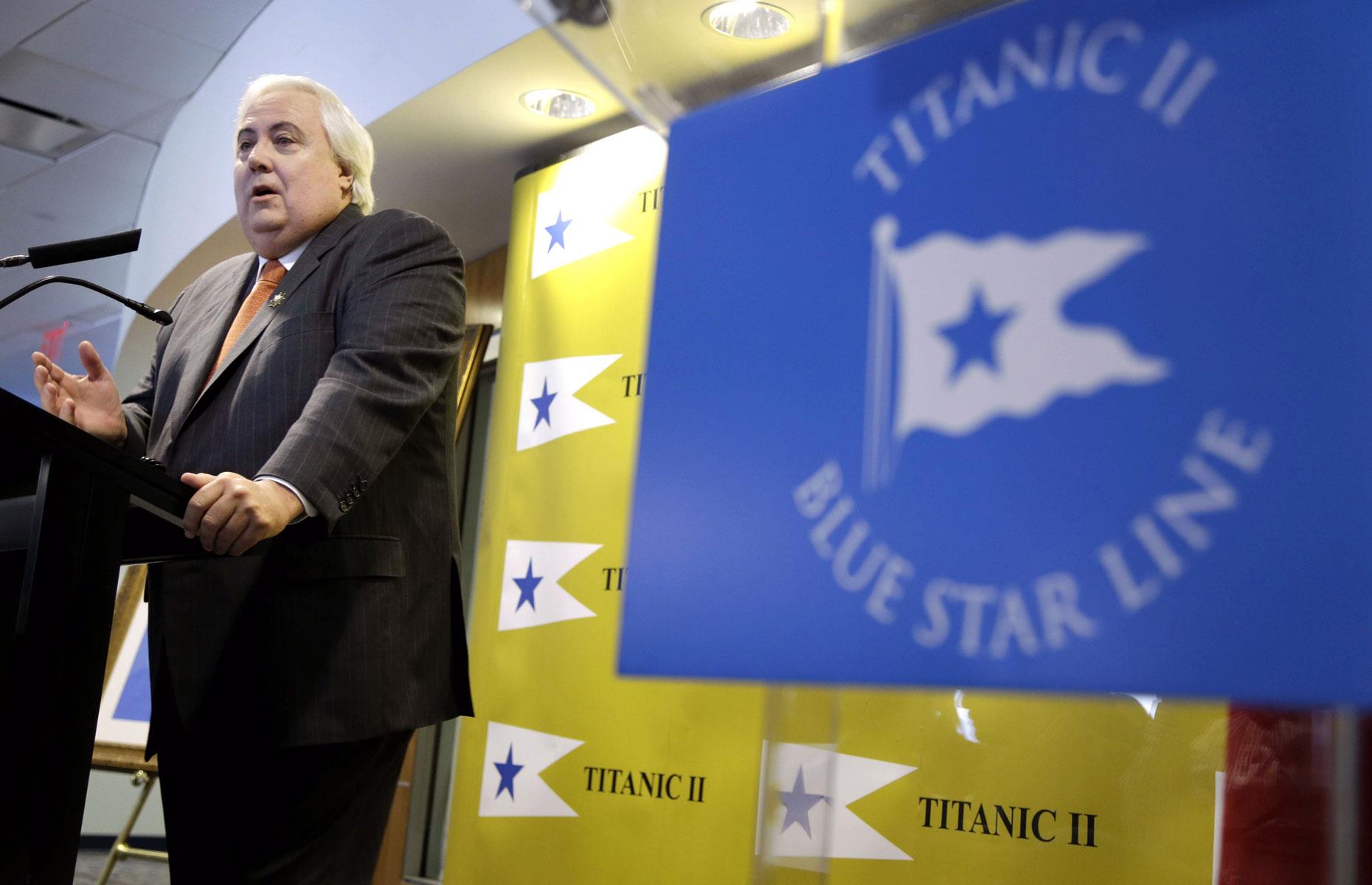 The design was unveiled in February 2013 at several glittering press events worldwide, including a gala bash held aboard the USS Intrepid in New York City and a lavish dinner at London's Natural History Museum.
Features

The modern reproduction will be 13 feet wider and three inches longer than the original Titanic and, with a gross tonnage of 56,000 tonnes, it will be a good 10,000 tonnes heavier than the first ship. Titanic II is expected to comfortably accommodate 2,435 first-, second- and third-class passengers and 473 crew.
Features 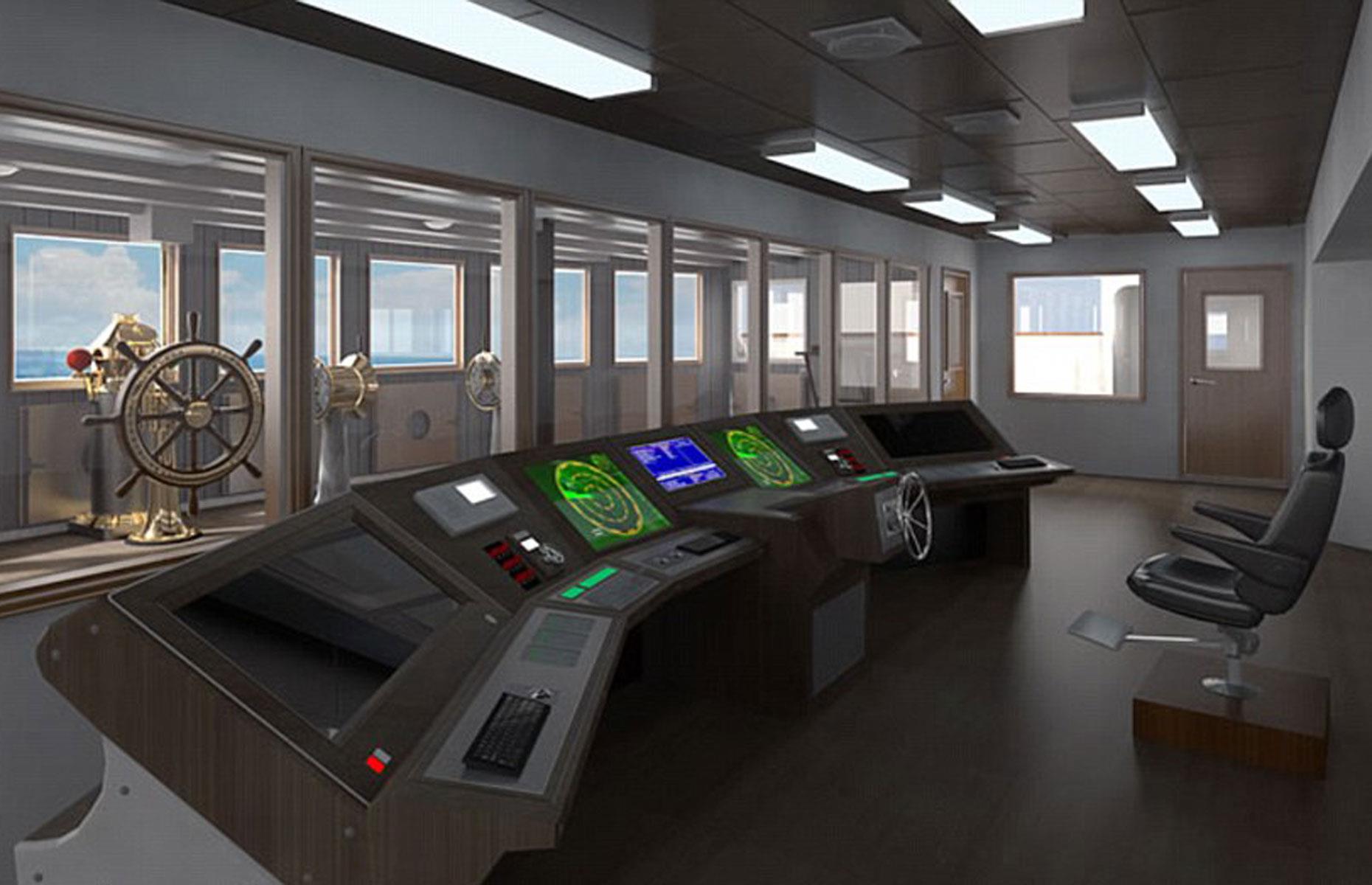 If it does ever get built, Titanic II will look uncannily like the original from the outside, but inside it will be 21st century. The new ship will boast state-of-the-art satellite controls, digital navigation, cutting-edge radar systems and modern evacuation procedures.
Features 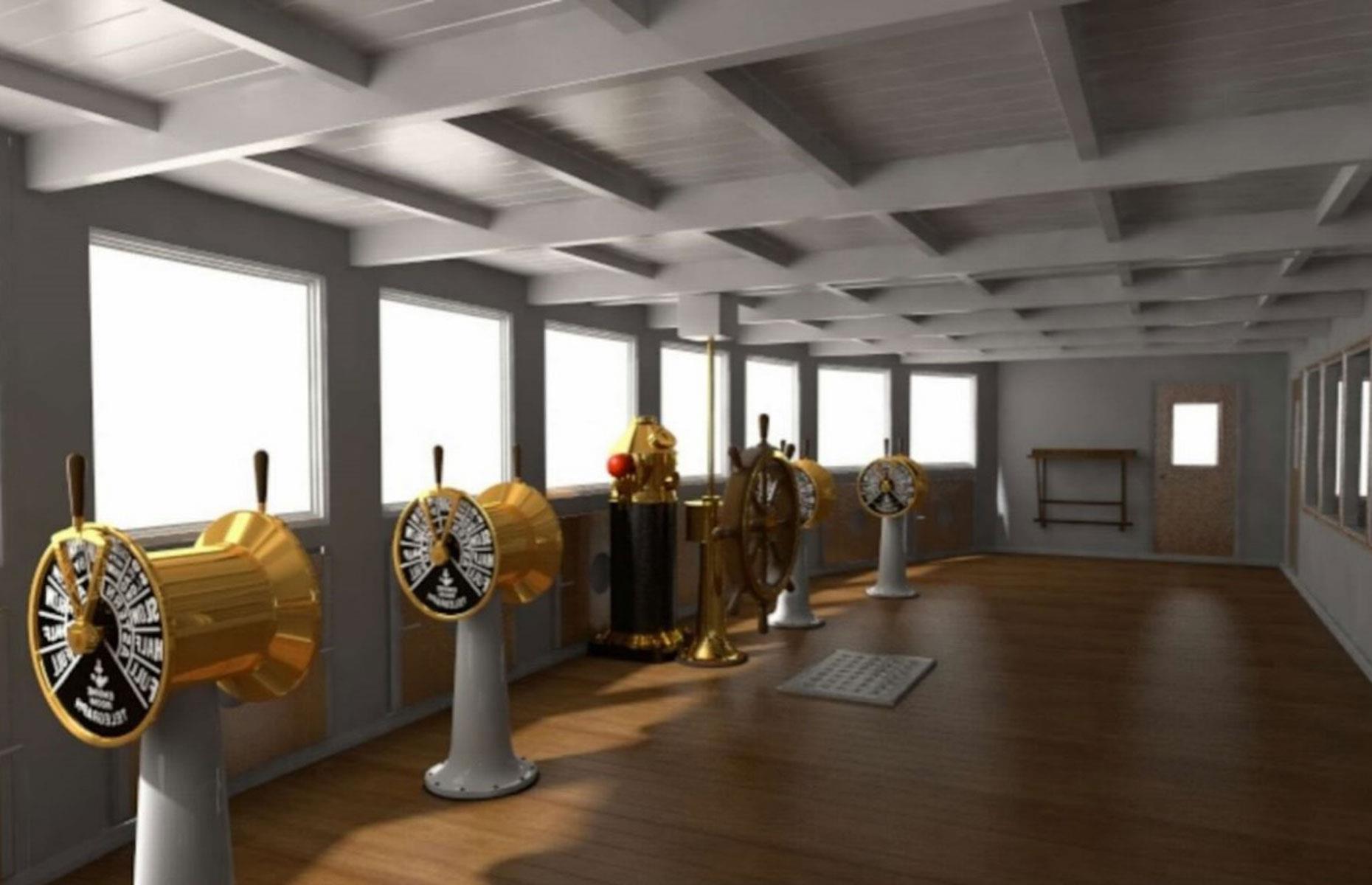 Likewise, Titanic II will be just as speedy as any modern cruise liner. The original Titanic's coal-fired boilers and old-fashioned steam engines will be replaced by a diesel-electric propulsion system in the modern replica.
Features 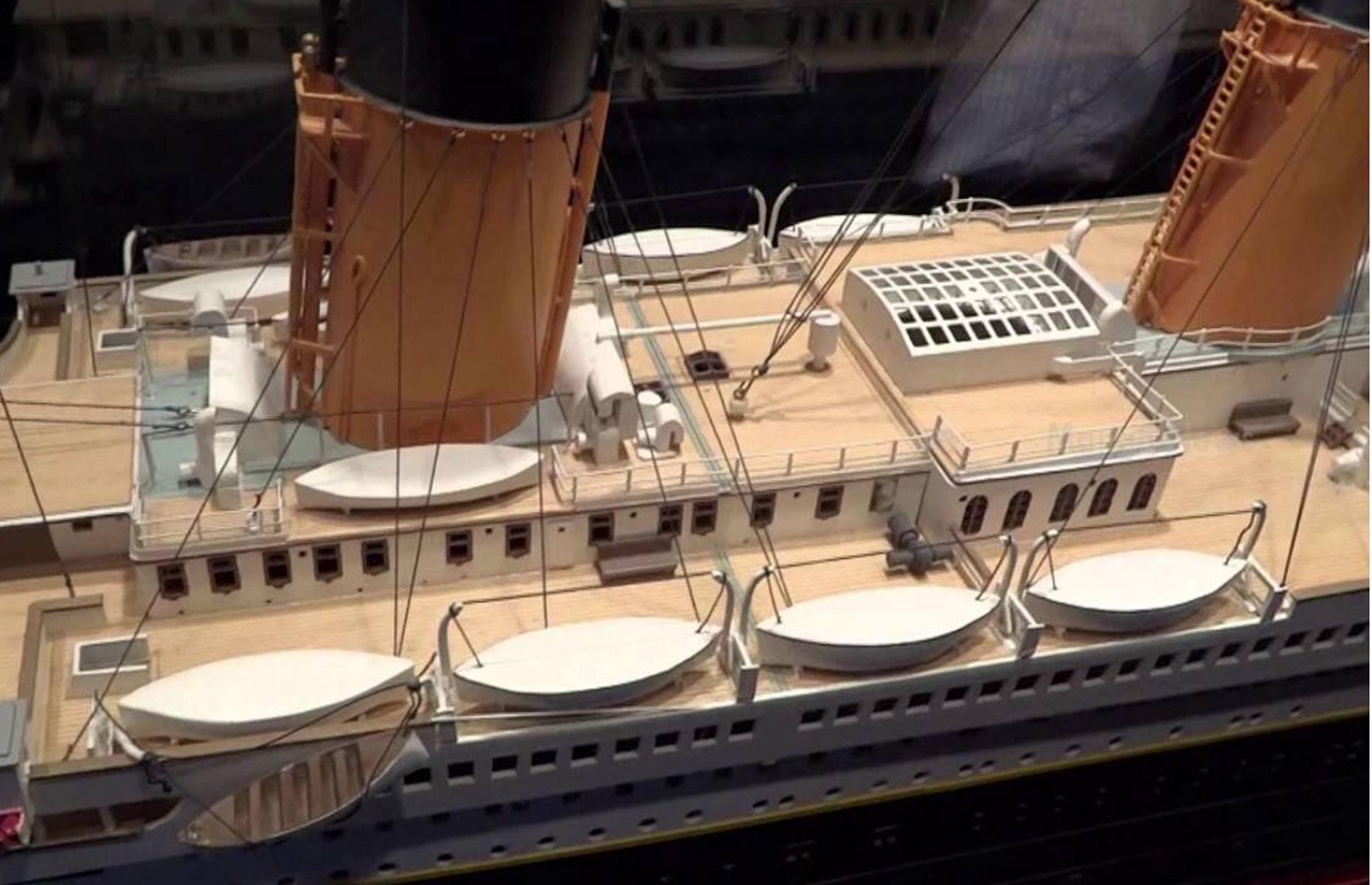 Thankfully, the reproduction Titanic will have plenty of those all-important lifeboats. The original liner had just 1,187 lifeboat places yet there was more than double this number of people on board. Titanic II will provide more than enough for all passengers and crew members.
Features

The six-star ocean liner will combine Edwardian grandeur with 21st-century mod cons – cabins and suites will feature all the latest tech and amenities, from Wi-Fi access to luxe en suite bathrooms, and the ship will have a nightclub and helipad.
Features 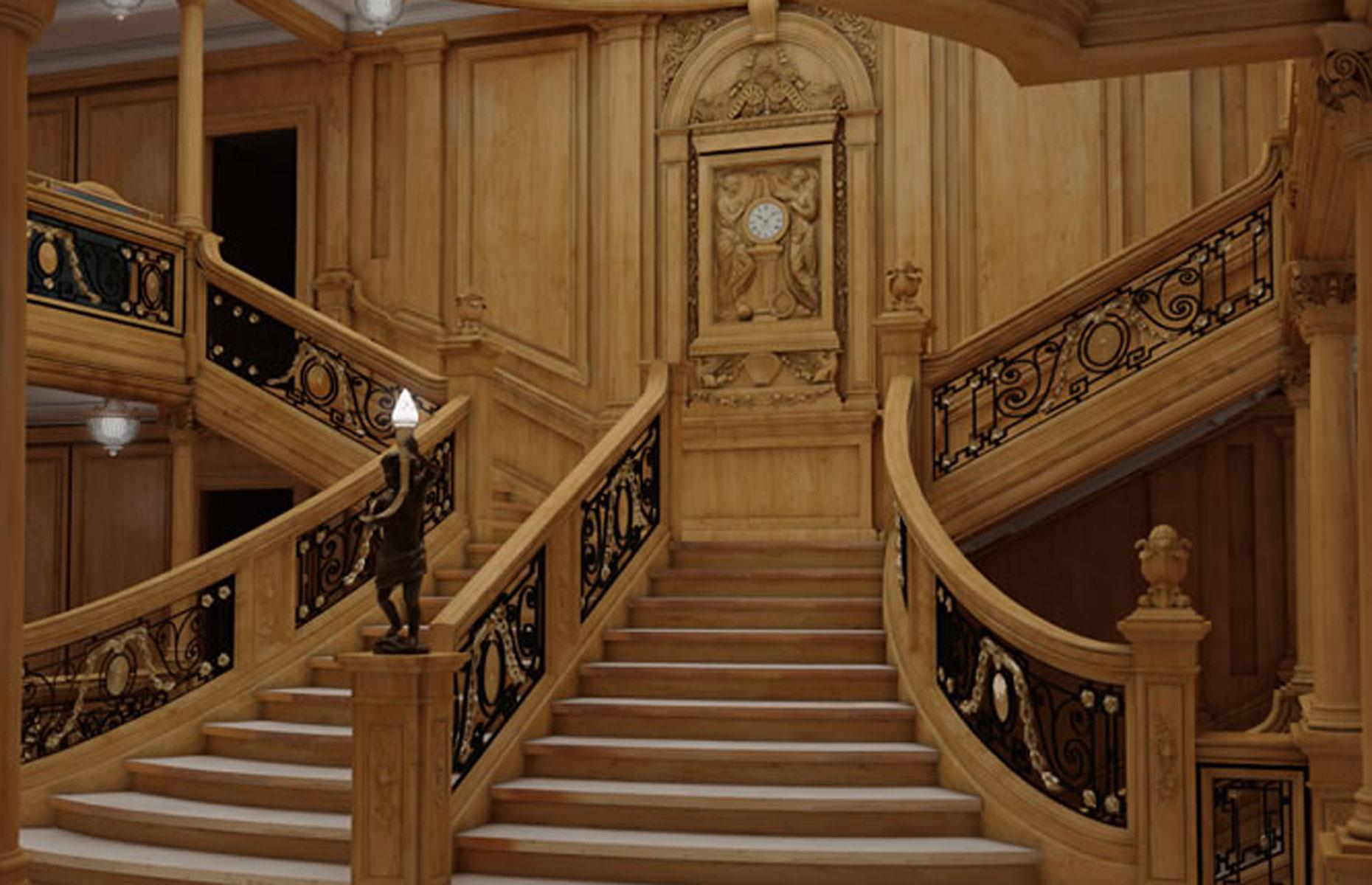 The famous grand staircase will be replicated in painstaking detail, not to mention the original Titanic's Café Parisien and Verandah Café, its elegant dining saloons, and even the dedicated cigar smoking room.
Features 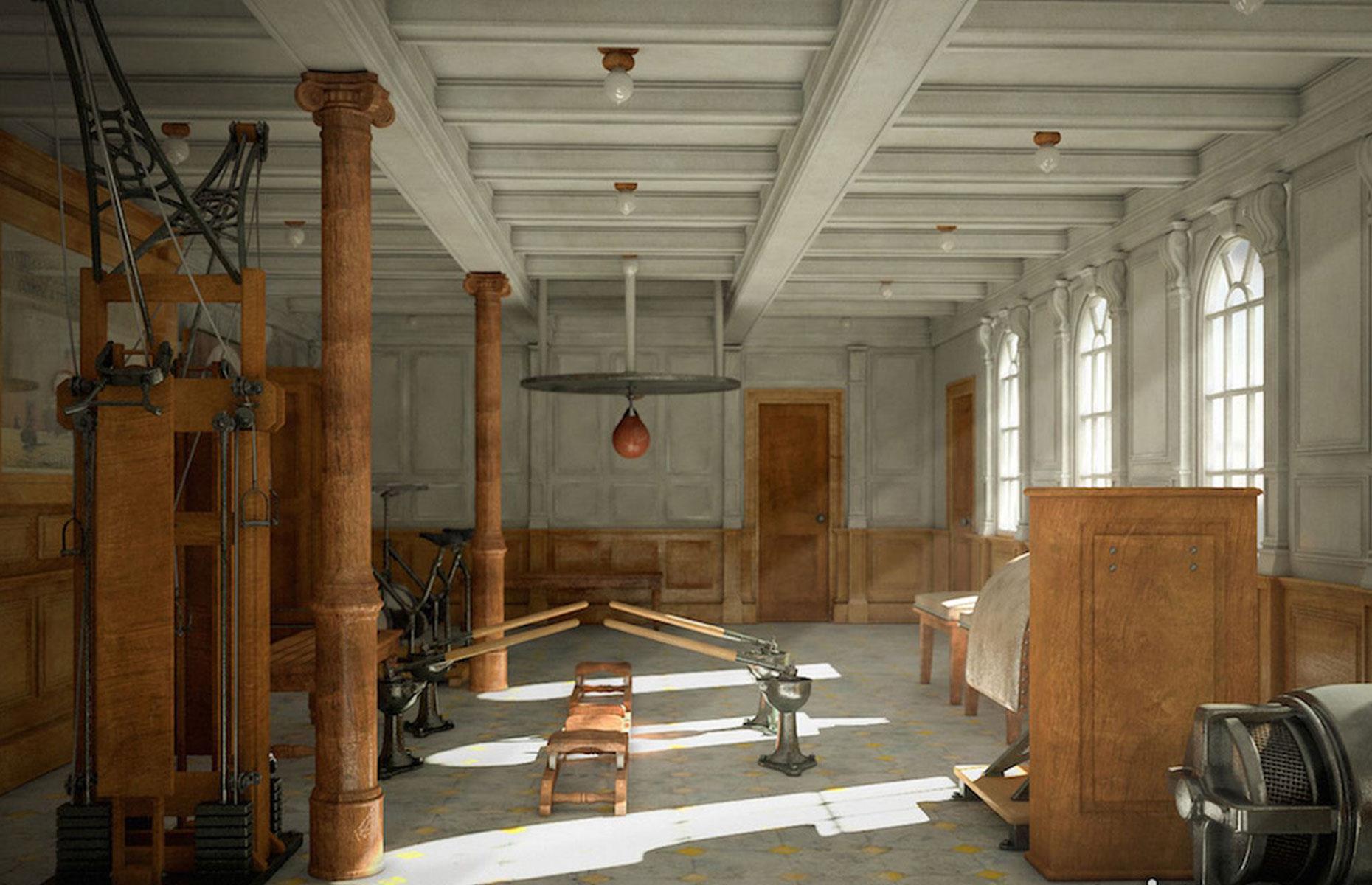 The ship will also feature a fancy Edwardian gymnasium with retro equipment, a copy of the Titanic's swimming pool and a replica of the original liner's ornate Turkish baths, which will operate as the new ship's wellness spa.
Features

Instead of staying true to the original transatlantic Southampton to New York City route, Titanic II’s maiden voyage will set sail from Jiangsu, China for a leisurely cruise to Dubai in the United Arab Emirates.
Features 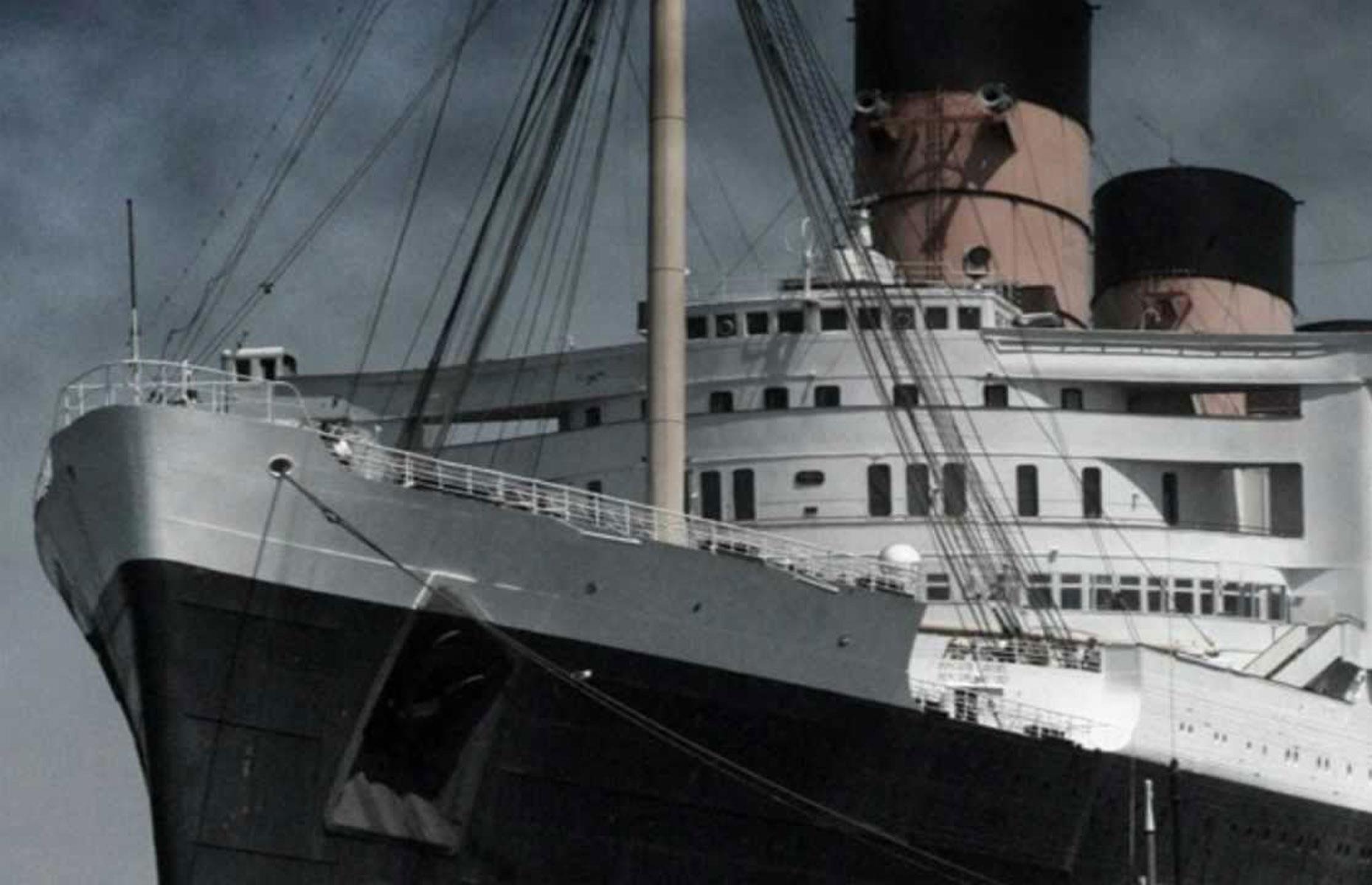 The project hasn't been without its detractors. Relatives of people who perished in the disaster have criticised Titanic II as insensitive and an insult to the memory of the victims. Meanwhile, Cunard Line, the shipping firm that merged with the company that built the original Titanic, is steadfastly against full-size replicas, which it has described as inappropriate and disrespectful.
Features 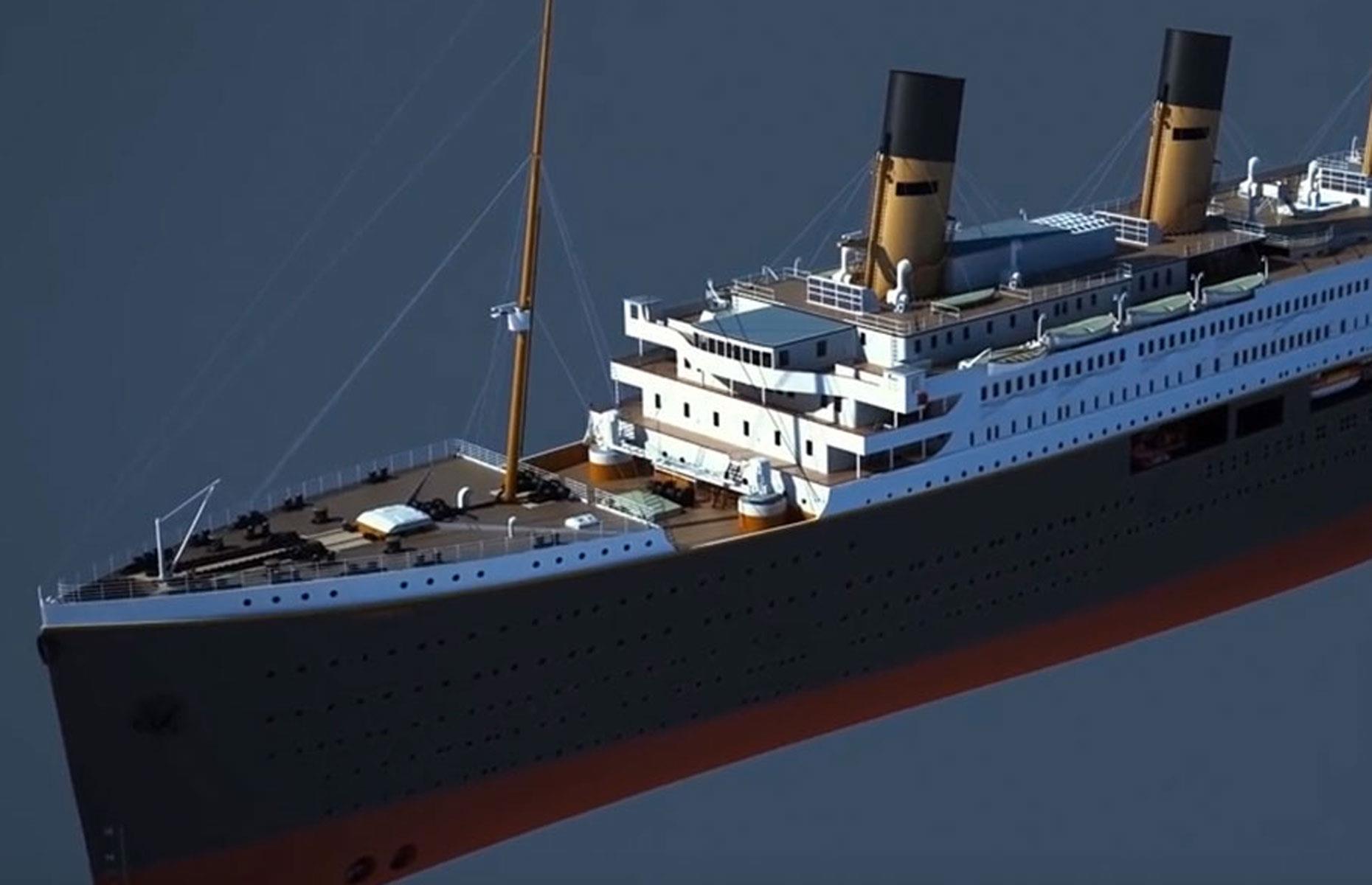 And it's now become mired in further controversy. Titanic II was initially meant to launch in 2016 but, following a dispute between Palmer's mining company and the Chinese firm Citic, funds were drained from the project, and the completion date was subsequently put back to 2018. However, in 2017 the Supreme Court of Western Australia ruled that Citic had to pay Palmer's mining company AU$150 million ($113m/£82.4m) in unpaid royalties, and as a result the Titanic II project came back to life. In late 2018 Blue Star Line announced construction on the ship had started up again with a new completion date of 2022 revealed. 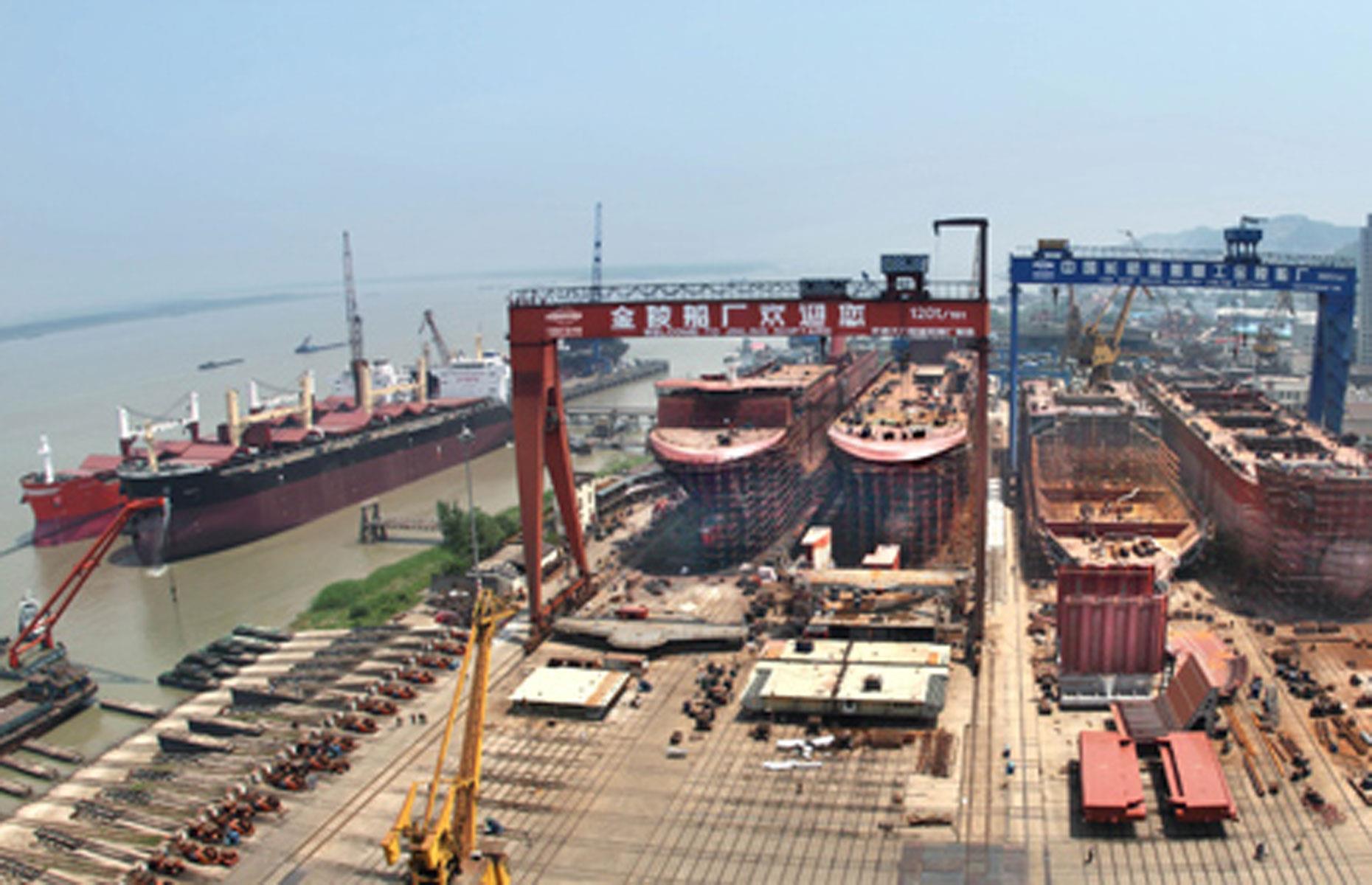 However, doubts have been cast over whether the ship's construction ever started, let alone restarted after Palmer's legal issues were resolved. China's CSC Jingling Shipyard in Jiangsu was thought to be responsible for building the ship, as reported during an interview segment with Palmer on 60 Minutes Australia in 2013, but in 2018 it was reported that a Blue Star Liner spokesperson stated that the ship was "most likely" to be built in the Northern hemisphere, suggesting that work on the ship had not even begun... 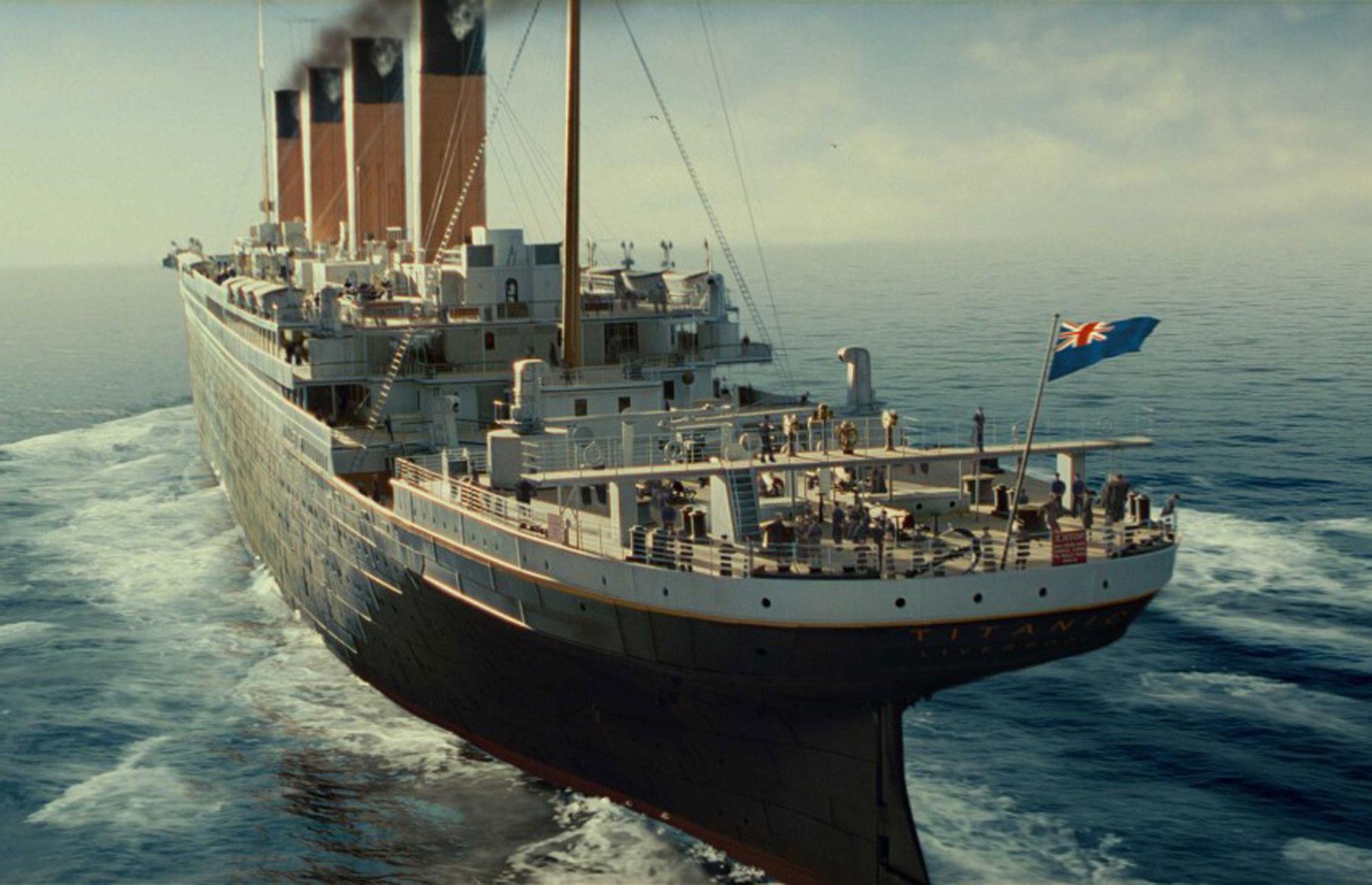 In February 2020 the company indicated via its Facebook page that announcements on the project's status would come later that year, but now two year later no more information has been released yet and our requests for an update have received no replies. As Clive Palmer has presided over a series of grandiose failed projects, including a replica Zeppelin and a Jurassic Park-themed resort, many wonder if the Titanic II will ever come to fruition...

But it's not the only Titanic project in the pipeline. Read on for the story of the Unsinkable Titanic.

Originally billed to launch in October 2017, the Unsinkable Titanic was going to be the star attraction at the Romandisea theme park in Sichuan, China.
Features 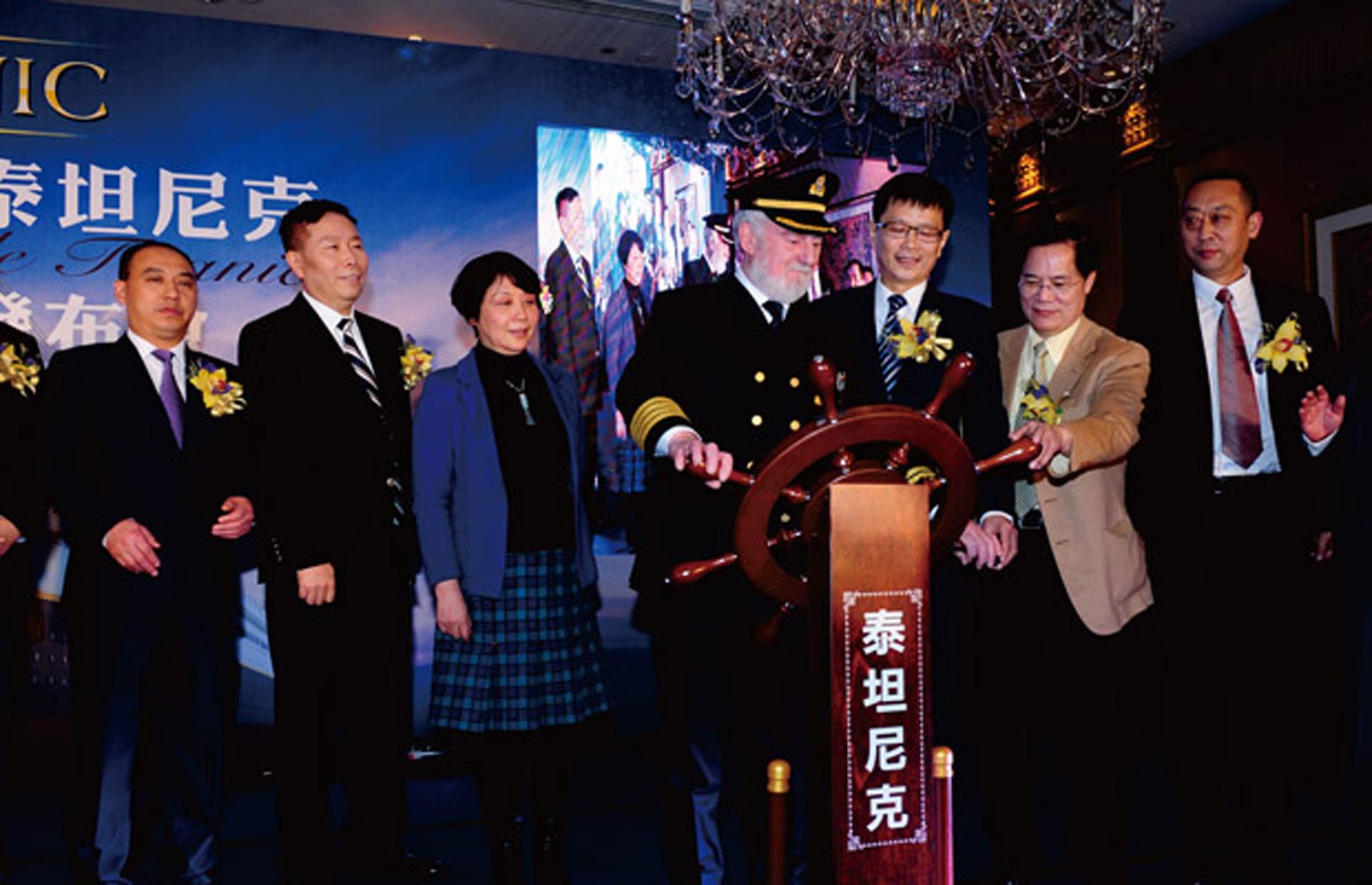 The project was announced in 2014 to much fanfare at a press conference in Hong Kong, which featured top-name Chinese celebs. Bernard Hill, the actor who played Captain Edward Smith in the 1997 Titanic movie, was even roped in to take part in the event.

Unlike Titanic II, this full-size replica won't go anywhere. A hotel and entertainment complex rather than a cruise ship, the repro luxury liner will be docked permanently in a reservoir within the river Qi.
Features

A far less complex build than Titanic II, the static Unsinkable Titanic is also a much cheaper project. The whole shebang is estimated to cost in the region of $125 million (£90.7m), considerably less than Titanic II's $500 million (£362m) price tag.
Features 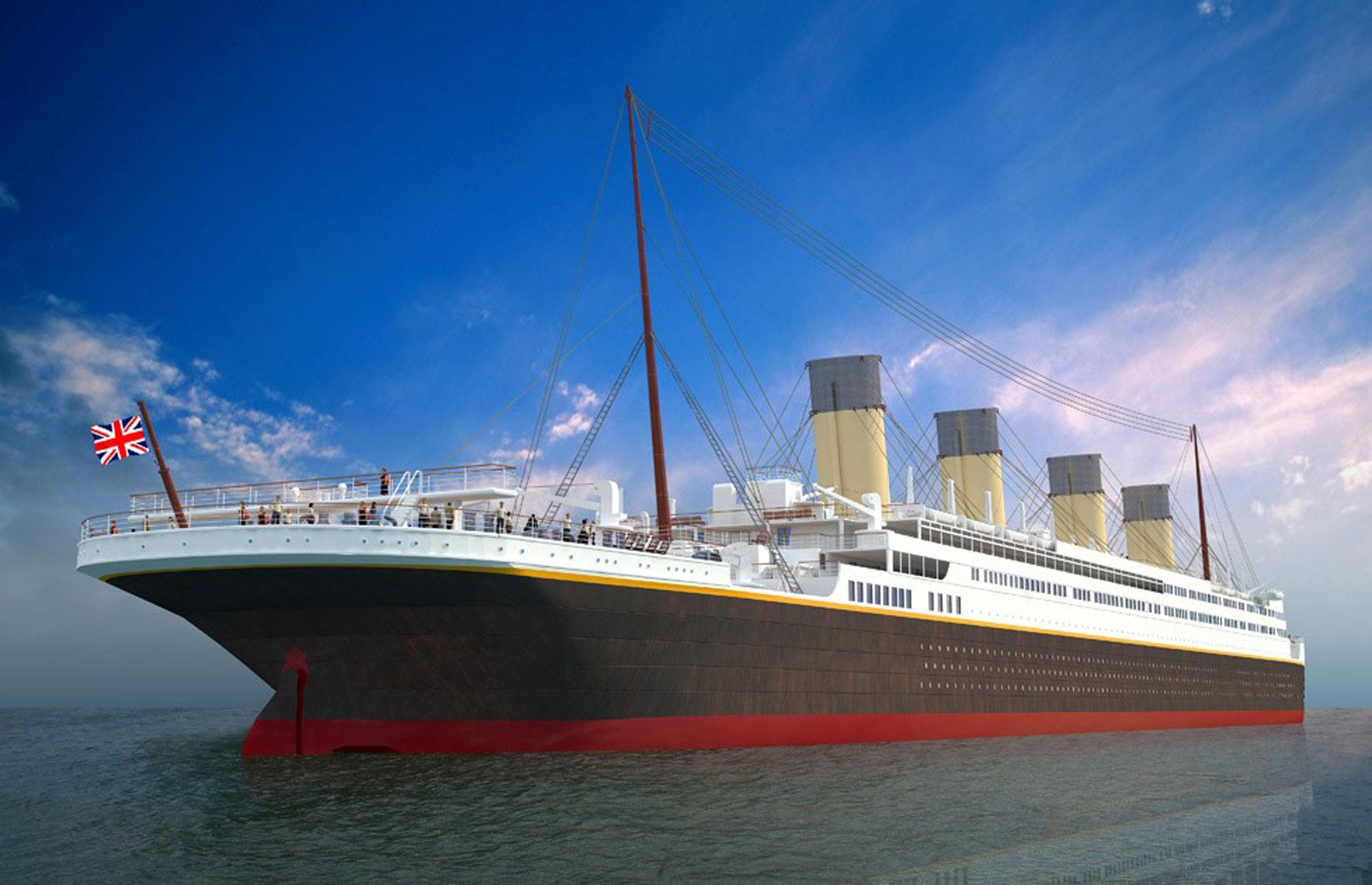 Seven Star Energy Investment Group, the company behind the project, enlisted the help of Emmy award-winning production designer Curtis Schnell to nail the design and capture the period feel of the original liner.
Features 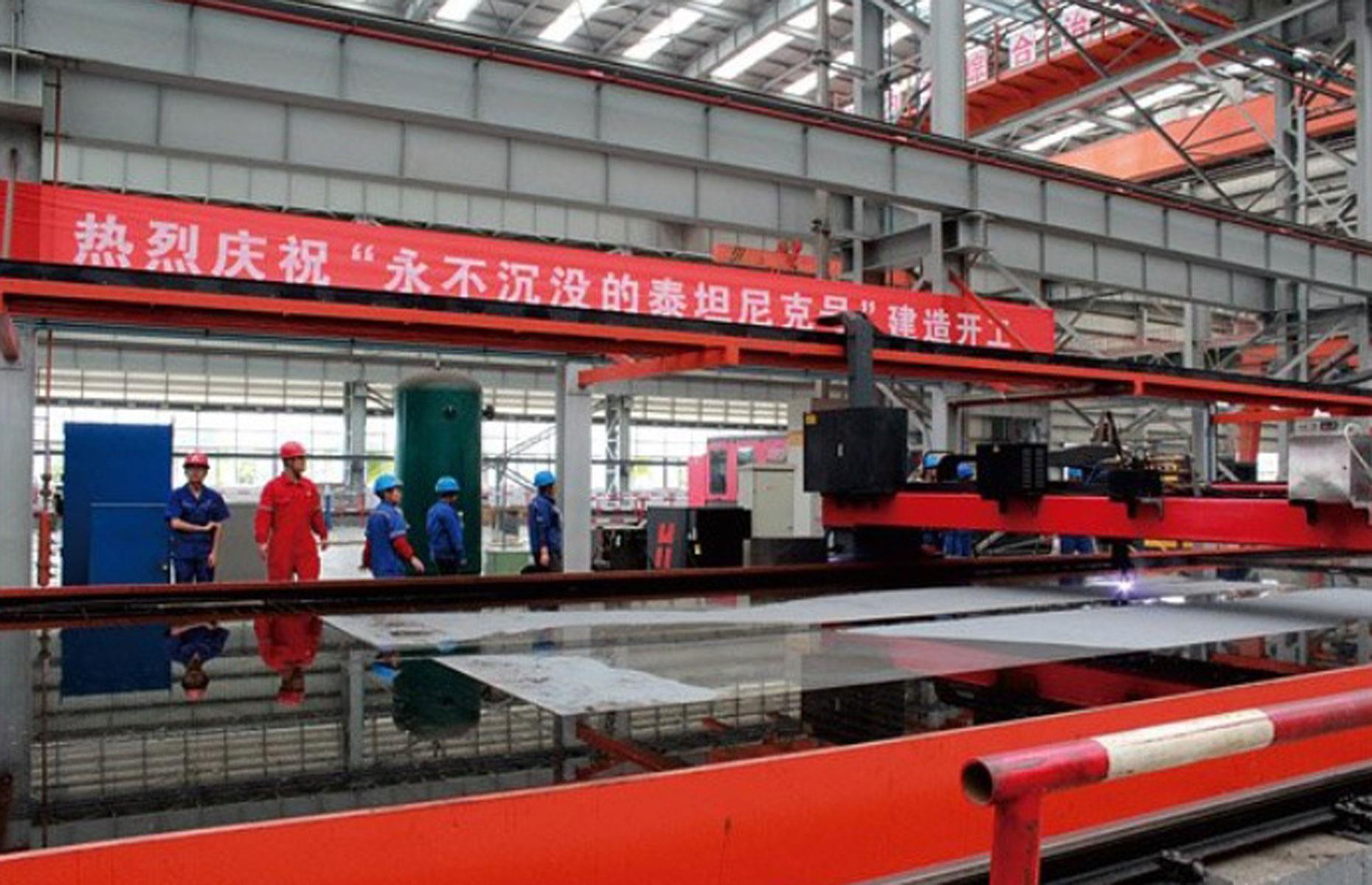 But unlike the Titanic II, at least it has been confirmed that construction definitely started. In fact, the beginning of what was meant to be an 11-month long construction project was marked with a keel-laying ceremony and spectacular fireworks display in November 2016. The copycat liner is being built by the Wuchang Shipbuilding Industry Group at its shipyard in Wuhan.
Features 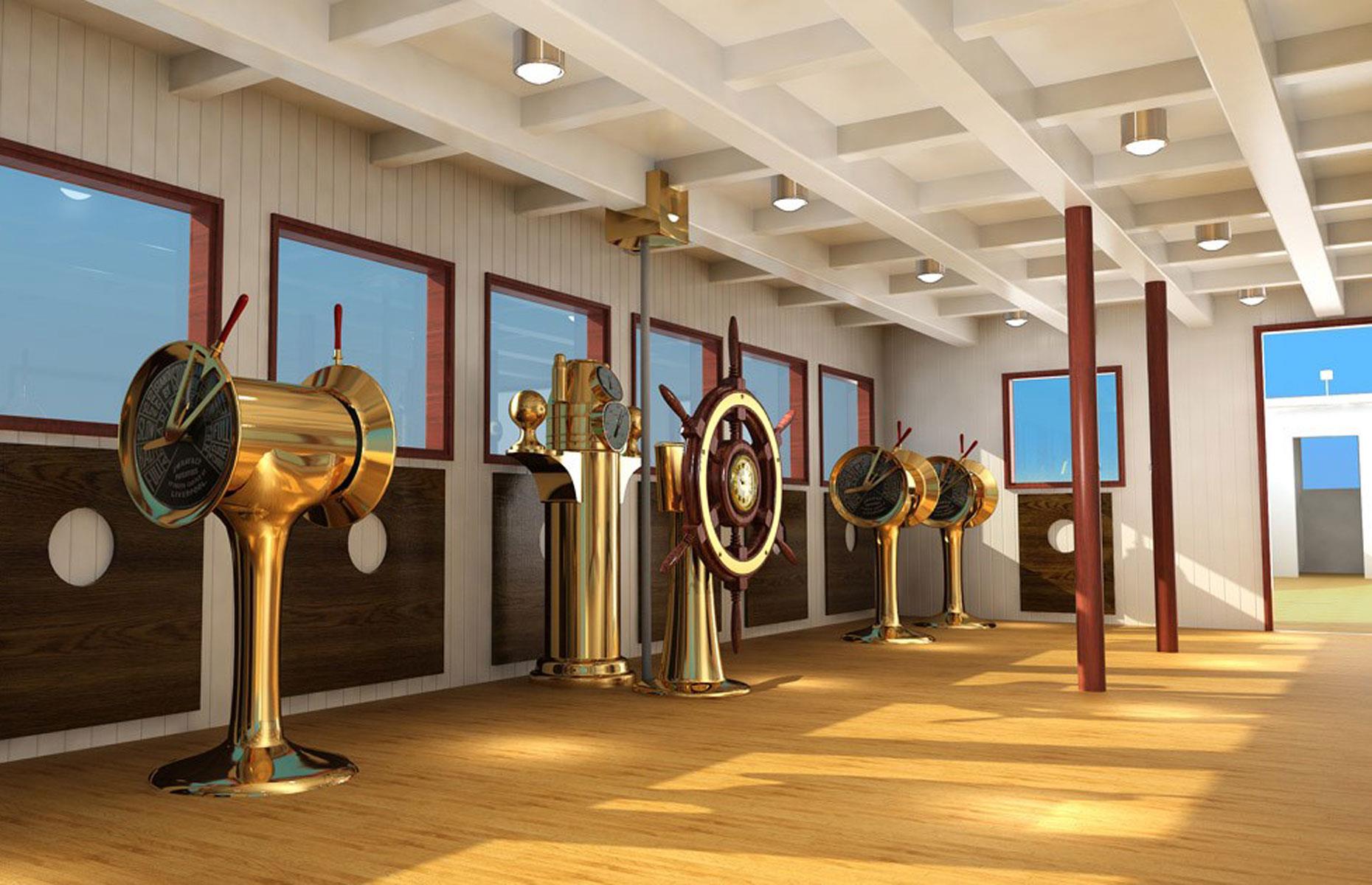 While not a 100% exact replica, Schnell and his team are aiming to get as close to the original as possible. “We are not building every room in the ship, by any means,” he says, “but the shell of the ship and the exteriors will be quite accurate.”
Features 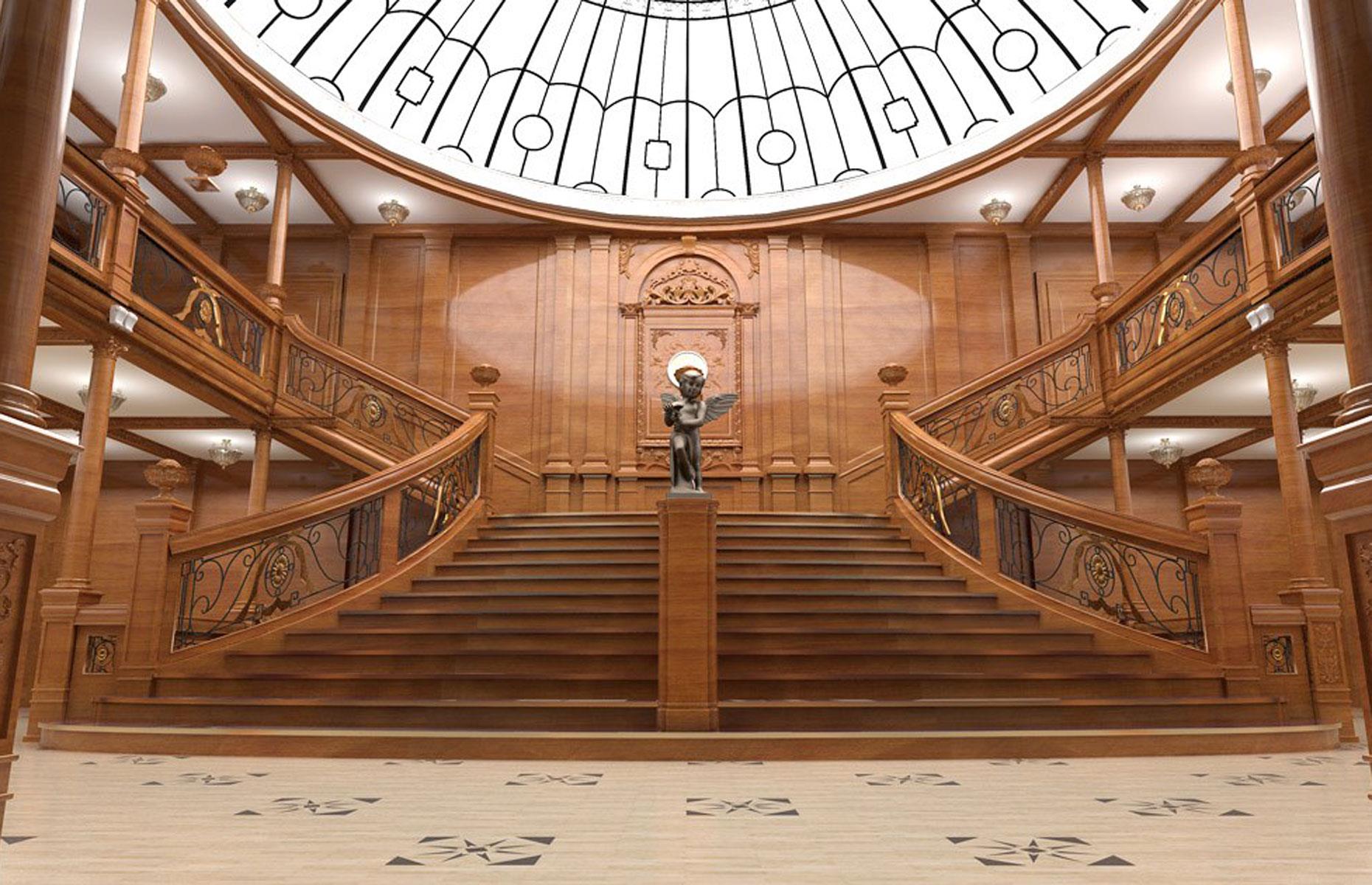 The most recognisable features of the original ship will be faithfully reproduced, including the grand staircase and dining saloons. There will also be a ballroom, which will be the venue for Edwardian-themed dance events.
Features 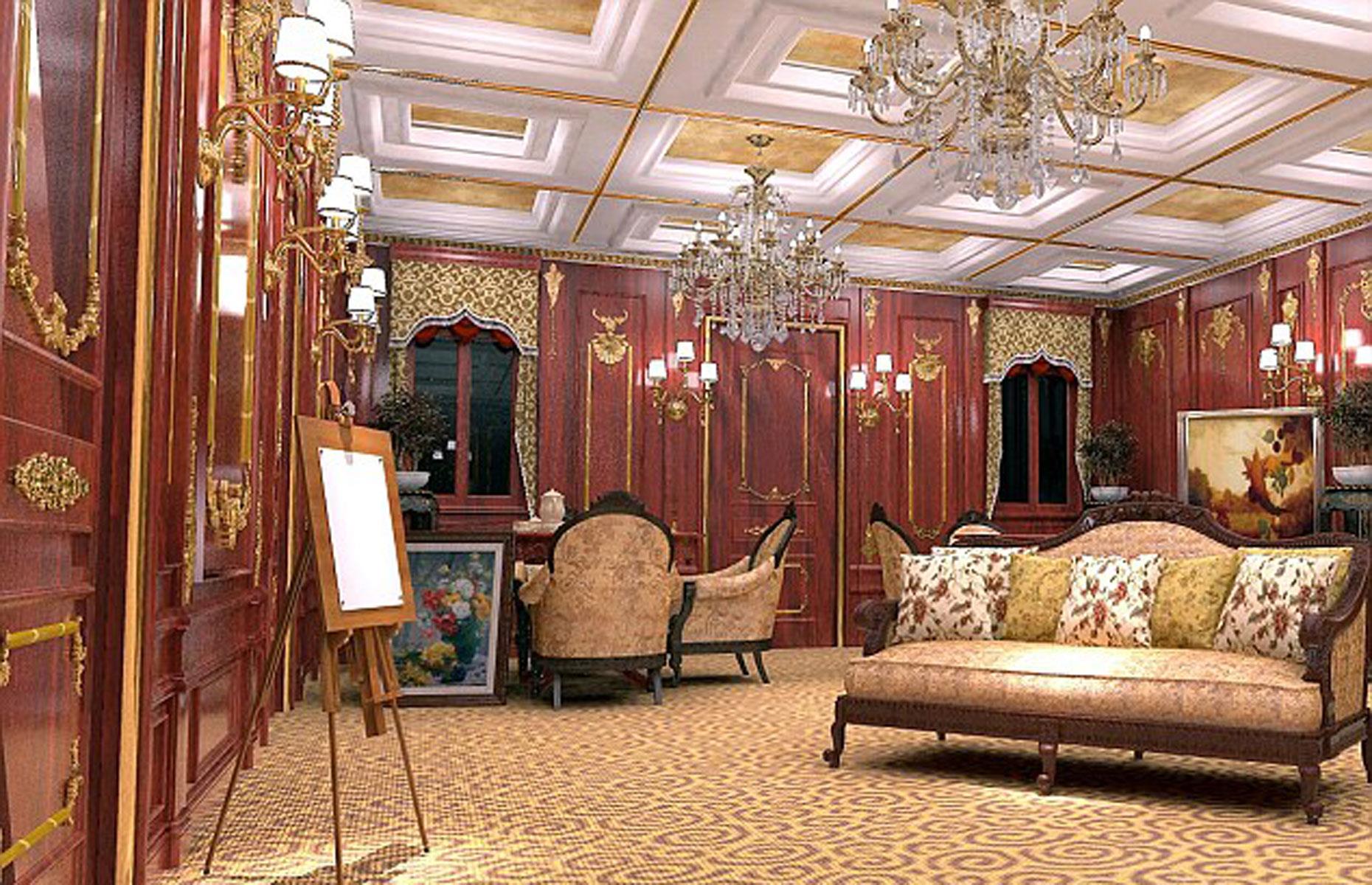 The replica ship is being built very much with the 1997 Hollywood movie in mind – the film was a massive success in China and remains extremely popular in the country. Needless to say, the interior will include the fictional boudoir in which Jack sketches Rose without her clothes on.
Features 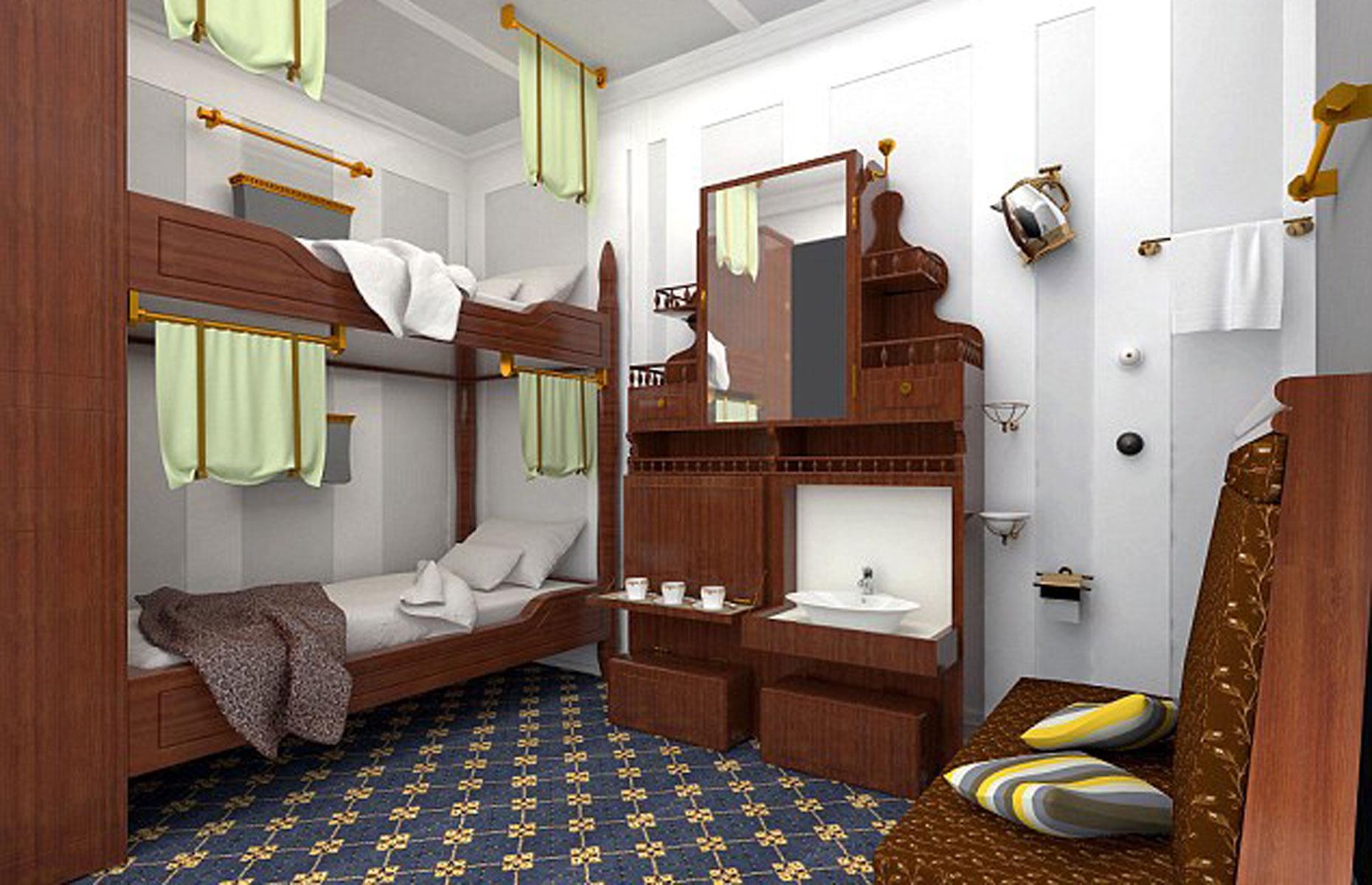 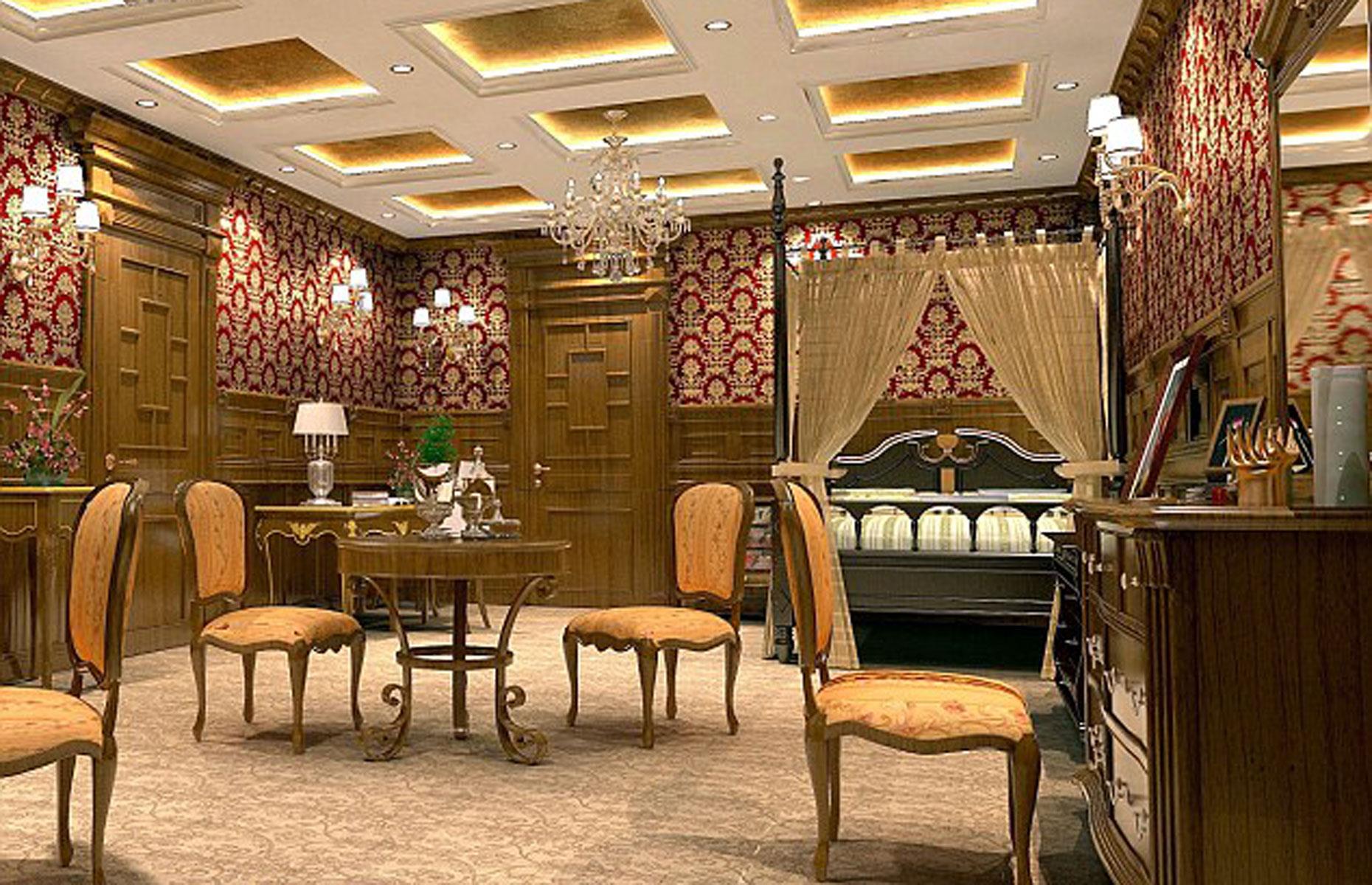 Wealthier guests can opt for a premium ticket, which includes a fabulous first-class suite with antique-style furniture and all mod cons. These high-end packages could cost as much as 10,000 yuan ($1,520/£1,100) per night.
Features 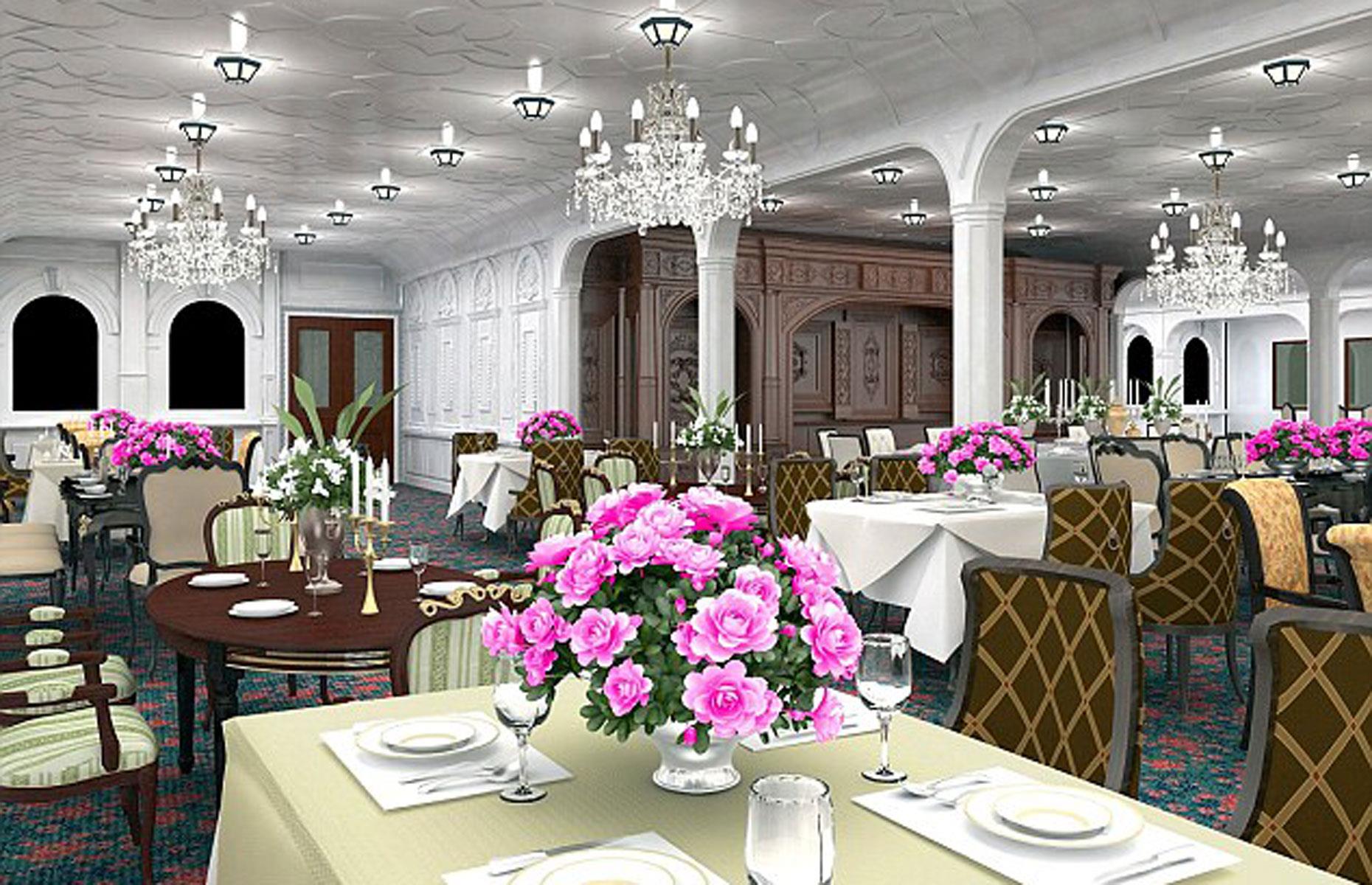 A hub of entertainment, the Unsinkable Titanic will feature Vegas-style amusements, cocktail parties in the replica Titanic swimming pool area, and restaurants that will recreate actual dishes served on the doomed liner's maiden voyage.
Features 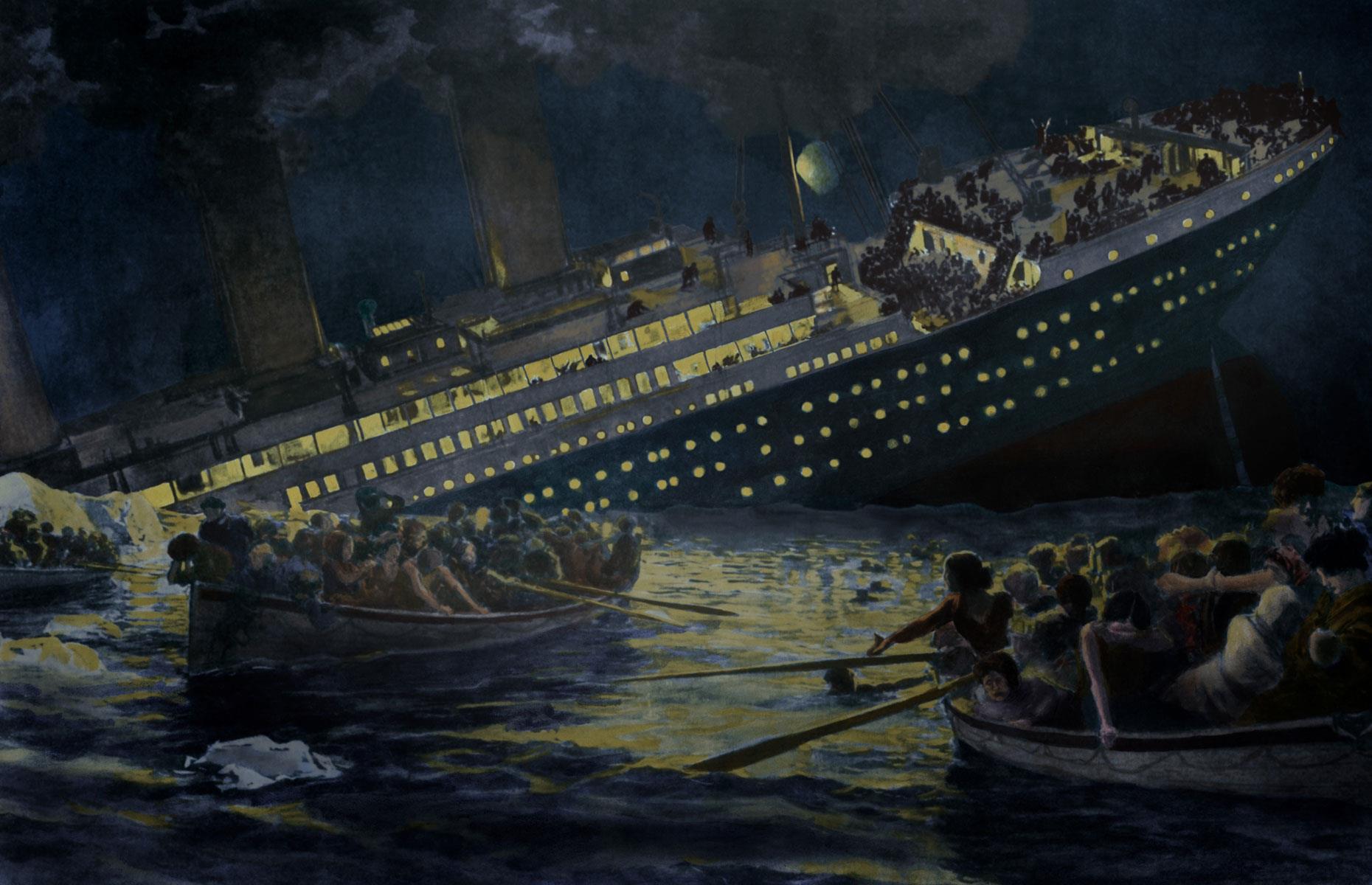 Controversially, the Unsinkable Titanic will feature a sophisticated iceberg simulation, which will recreate conditions on the ship at the moment the original Titanic was struck in the Atlantic Ocean. The simulation will use light and sound to enhance the creepy experience.
Features

But the build missed its 2017 completion date, and in February 2019 it was reported that construction was still underway. The latest update came in April 2021 when the project's Facebook account shared photos and videos of the construction site. But while the project's social media accounts have shown that the ship is being built, the project is far from finished and no revised date has been given for its completion, just lots of rumours.

And construction timelines aren't the only issue. As with Titanic II, the Unsinkable Titanic has attracted a number of critics, who feel the project is tasteless and trivialises the tragedy by exploiting it as an entertainment experience. According to Curtis Schnell, however, the project is being developed in “a very respectful way”. UK newspapers reported in August 2021 that the ship had been adandoned. We've approached Romandisea for an update several times but no one has responded to us.

Don't have the patience to hold out for a full-size replica? You can pay a visit to one of America's half-scale Titanic copies. The Titanic Museum in Branson, Missouri and its sister establishment in Pigeon Forge, Tennessee have impressive half-scale reproductions of the iconic liner.

Now read about the music memorabilia that sold for a fortune