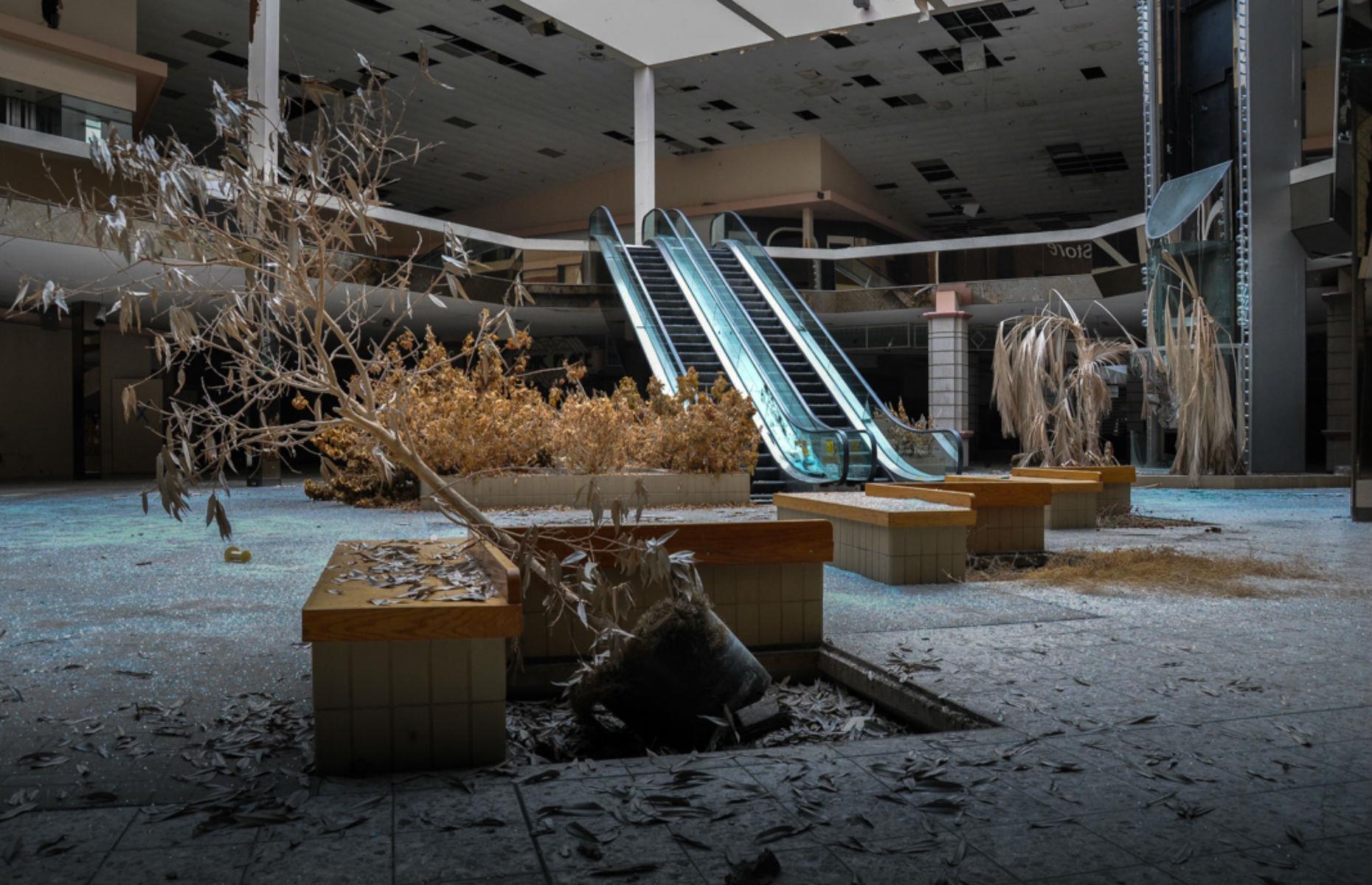 The COVID-19 pandemic accelerated the closure of stores all over the country, but the decline of once-popular shopping malls is nothing new. From unsolved murders to multimillion-dollar bankruptcies, read on to discover the shocking stories behind some of America's "dead malls", as photographers reveal the chilling remains of six abandoned shopping centers.
Features
1 of Seph Lawless
List View Gallery View Full screen

Rolling Acres Mall opened in Akron, Ohio in August 1975. The two-story structure, which was a big deal back then, had fancy glass elevators, glass ceilings, a water fountain and arboretum. It was considered the premier shopping destination in the Akron area.
Features
2 of Seph Lawless
List View Gallery View Full screen

When it first opened its doors there were 21 stores and a Sears. By the end of its first year that number had more than doubled to 50 and JCPenney opened a department store there as well. By the mid-1980s there were more than 140 stores operating along with a three-screen movie theater.
Features
3 of Seph Lawless
List View Gallery View Full screen

For the first 20 years profits rolled in, but by 1998 tenants had begun leaving Rolling Acres. One of the mall's largest financiers, Nomura Assets Securities Corporation, had its credit rating downgraded and fingers began to point at the shopping mall's dwindling sales as part of the firm's problem. 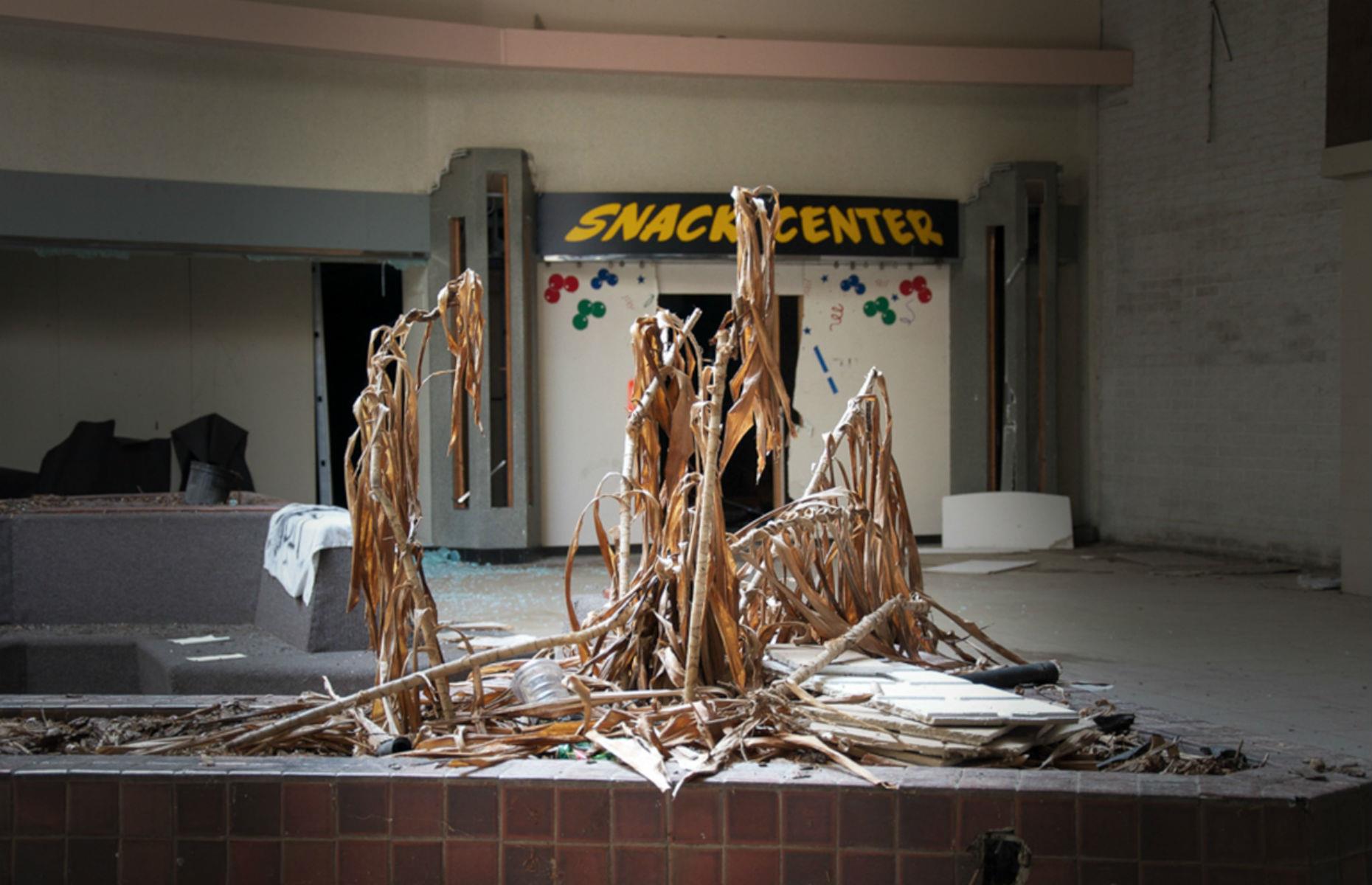 In October 2008 the electricity was abruptly cut off after months of unpaid bills and the mall closed except for the Sears and JCPenney stores. Rolling Acres officially went into foreclosure later that year after the owners failed to pay their taxes. It was eventually bought by a California company in 2010, which also failed to pay taxes on the building and owed around $1.3 million in back taxes. Once again the mall, now empty, went into foreclosure in 2013.
Features
7 of Seph Lawless
List View Gallery View Full screen

Rolling Acres was left vacant for years and looters stripped the once prosperous mall of its former glory. The building was eventually demolished between 2016 and 2019 after the City Council decided it posed a danger to residents: In 2011 a serial killer murdered and buried his victim behind the mall.

Amazon announced in July 2019 it acquired the land where the Rolling Acres Mall had been and by November 2020 the retail giant had opened a new distribution center. With at least 1,500 new jobs at Amazon other businesses have opened nearby, in an area that had become a ghost town as the mall met its demise.

Randall Park Mall was the largest mall in America when it opened in 1976. Located in North Randall, Ohio, the town had a population of just 1,500. Despite the small local population around 5,000 staff worked at the shopping center.
Features
10 of Seph Lawless
List View Gallery View Full screen

The original mall had two levels with more than 200 stores spread across 1.6 million square feet of space. It reportedly cost around $40 million to build, the equivalent of almost $198 million in 2022. At its grand opening Randall Park Mall had five department stores.

The death of then-owner Edward DeBartolo in late 1994 is said to have marked the beginning of the end for the mall. Various management companies attempted, but ultimately failed, to revive the once-popular shopping destination.

In 2000 the mall's occupancy rate had climbed to 92% after slipping in the late 1990s. This sparked hope that the site could recover – but by 2001 the future of Randall Park Mall looked much bleaker as JCPenney became the latest department store to close up shop due to falling sales.

In 2002 then-owner Simon Property Group allowed a mortgage company to take over the property rights in lieu of foreclosure. In the same year tragedy struck the mall when a Dillard’s security guard killed a shoplifter and was sentenced to three years in prison. Dillard's closed its store in 2003 citing poor sales. However, many reports speculate that a $2.8 million lawsuit filed by the victim's mother was actually responsible for the closure.

By 2004 around 50% of the mall was empty. Locals reportedly kept their distance due to safety concerns over the structure, which was quickly becoming dilapidated. Randall Park Mall was sold to Whichard Real Estate for $6 million that year. Multiple buyers had considered the property. This included a South African developer who planned on purchasing Randall Park and other abandoned malls in the hope of restoring them to their former glory, but all the deals fizzled out.

After the recession drove the mall further into the ground, Randall Park shut its doors for good in 2009. Five years later demolition work began, with just a single store still open for business, a free-standing Burlington Coat Factory that then closed in 2015.

As with Rolling Acres it was Amazon that swooped in to redevelop the site of the Randall Park Mall. In 2017 the company demolished all of the remaining facilities and built an 855,000 square feet fulfillment center with the aim of creating 2,000 jobs for local residents. It reportedly cost $177 million to build.
Features 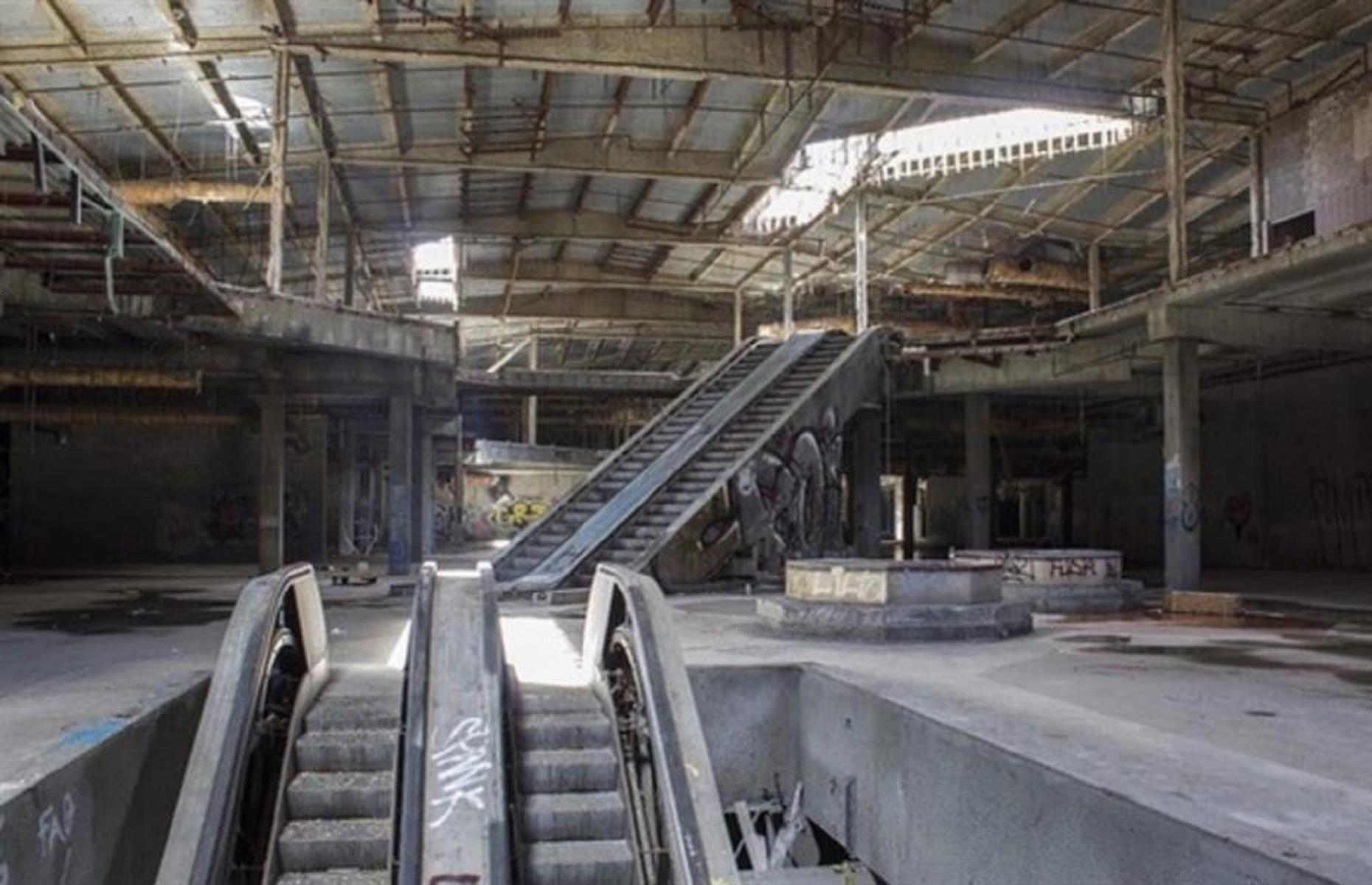 When the Hawthorne Plaza Mall opened in 1977 it was a popular shopping destination for the residents of this Los Angeles suburb. Just 20 years later, however, its tenants had all left. 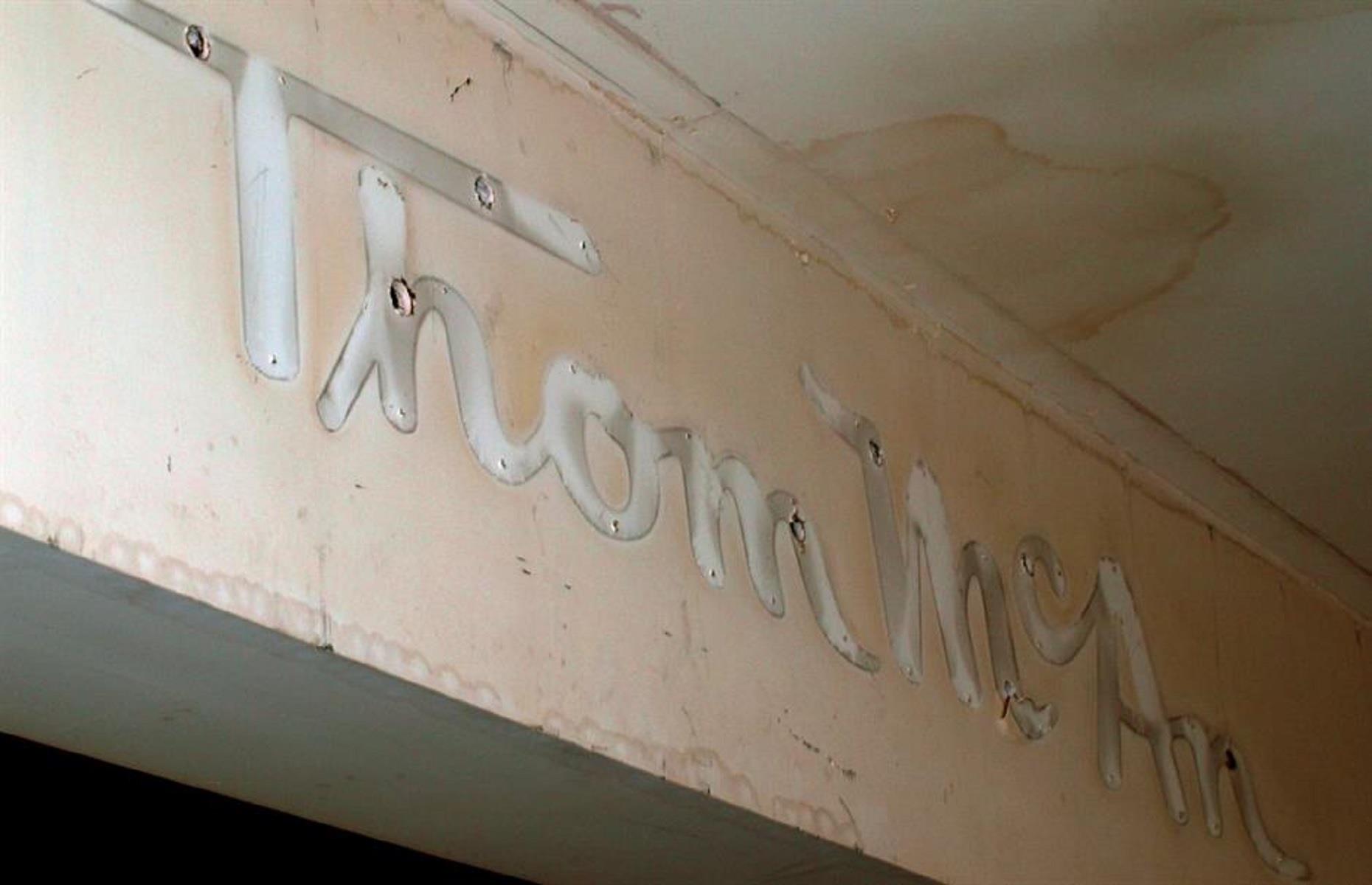 Since the mall closed its doors in 1999 various development plans have been put forward ranging from outlet malls to office complexes. Pictured is the shell of a former Thom McAn shoe store located in the mall. 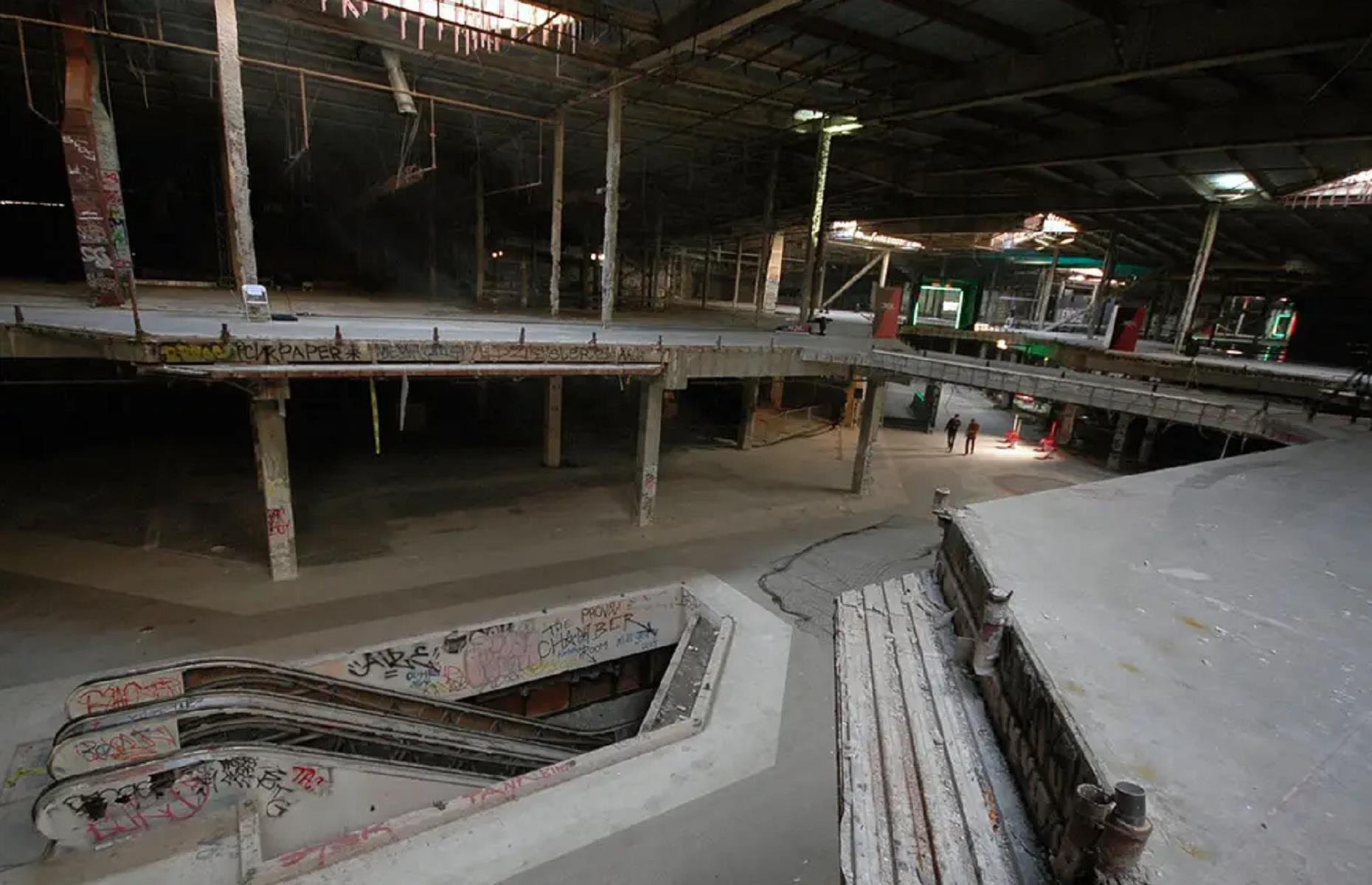 In 2016 the abandoned mall was taken over by the Drone Racing League, which set up a drone racing track around the building for a weekend. That same year authorities approved plans to demolish the mall and build an open-air development in its place. These plans were put on hold indefinitely.
Features 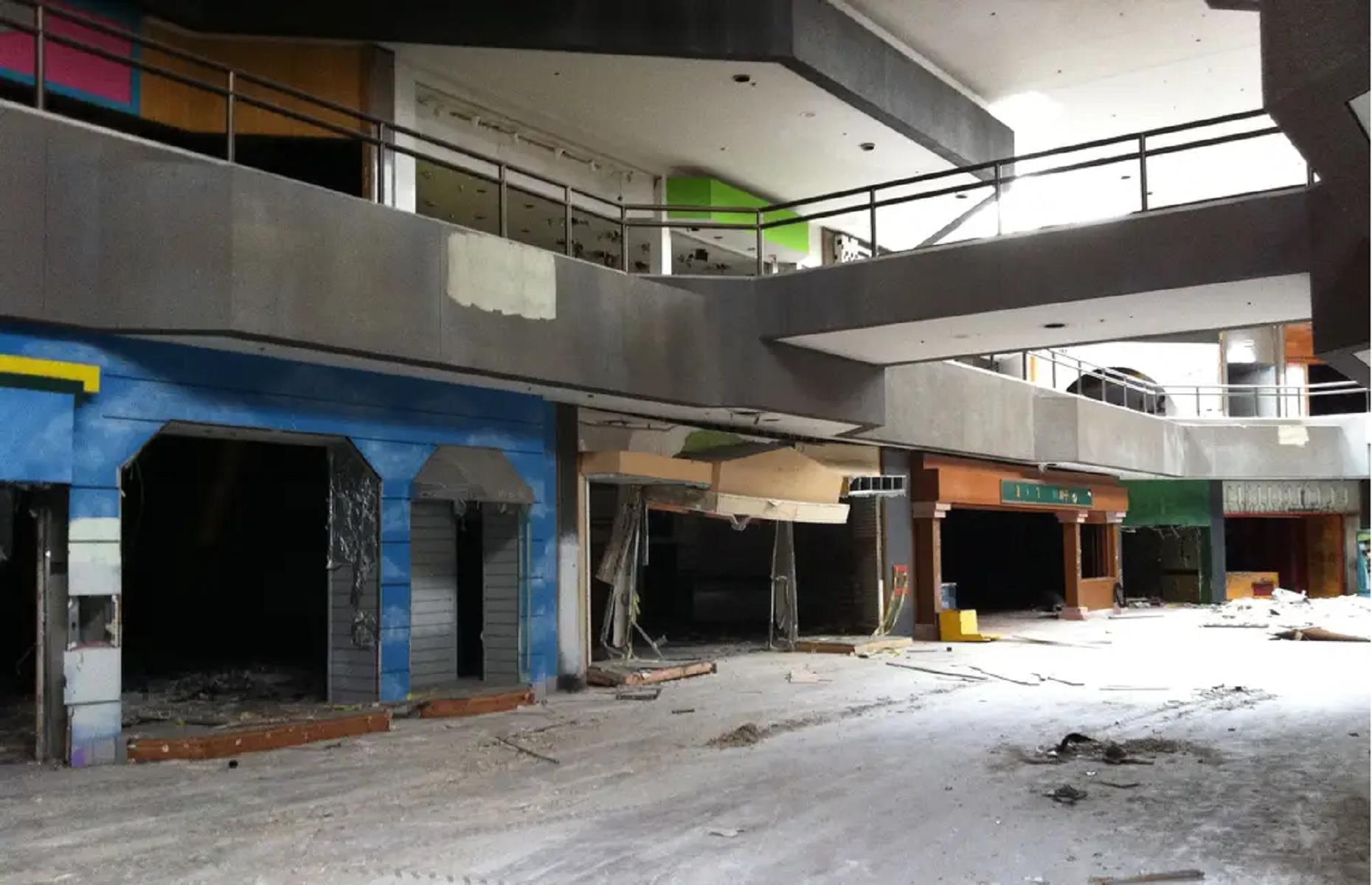 Currently the mall's parking lot is used to store Tesla vehicles. The building has also provided an apocalyptic backdrop in music videos for singers including Beyoncé and Taylor Swift, as well as for films such as Minority Report, The Fast and the Furious: Tokyo Drift, and Gone Girl. 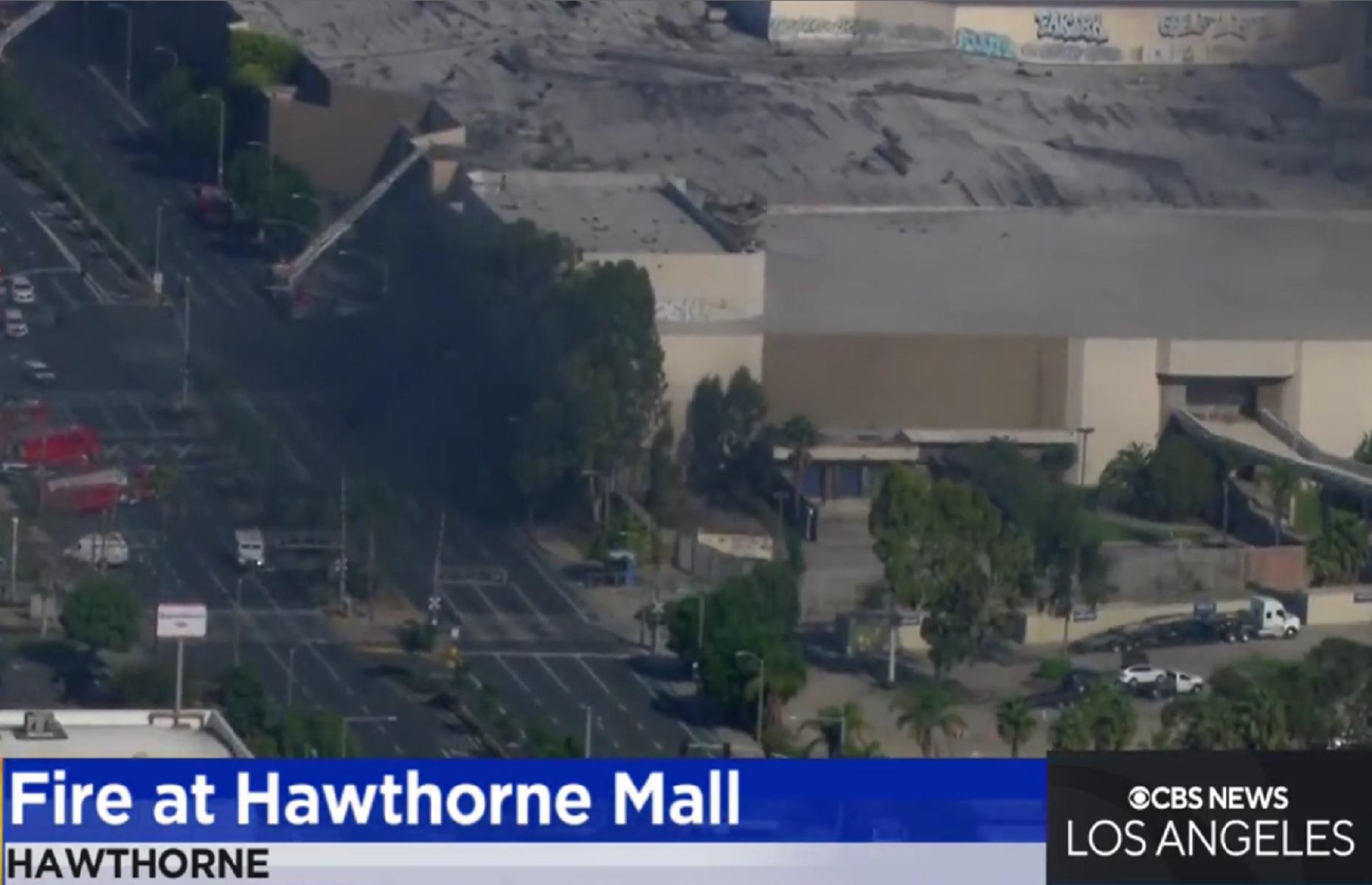 In November 2021 the City of Hawthorne sued the mall's owner, saying the abandoned shopping center is a blight on the community and dangerous. Just two months later a fire broke out, possibly from a pile of garbage in one of the mall's underground parking facilities. But as of 2022, no plans have been put into motion and the redevelopment has been permanently put on hold. 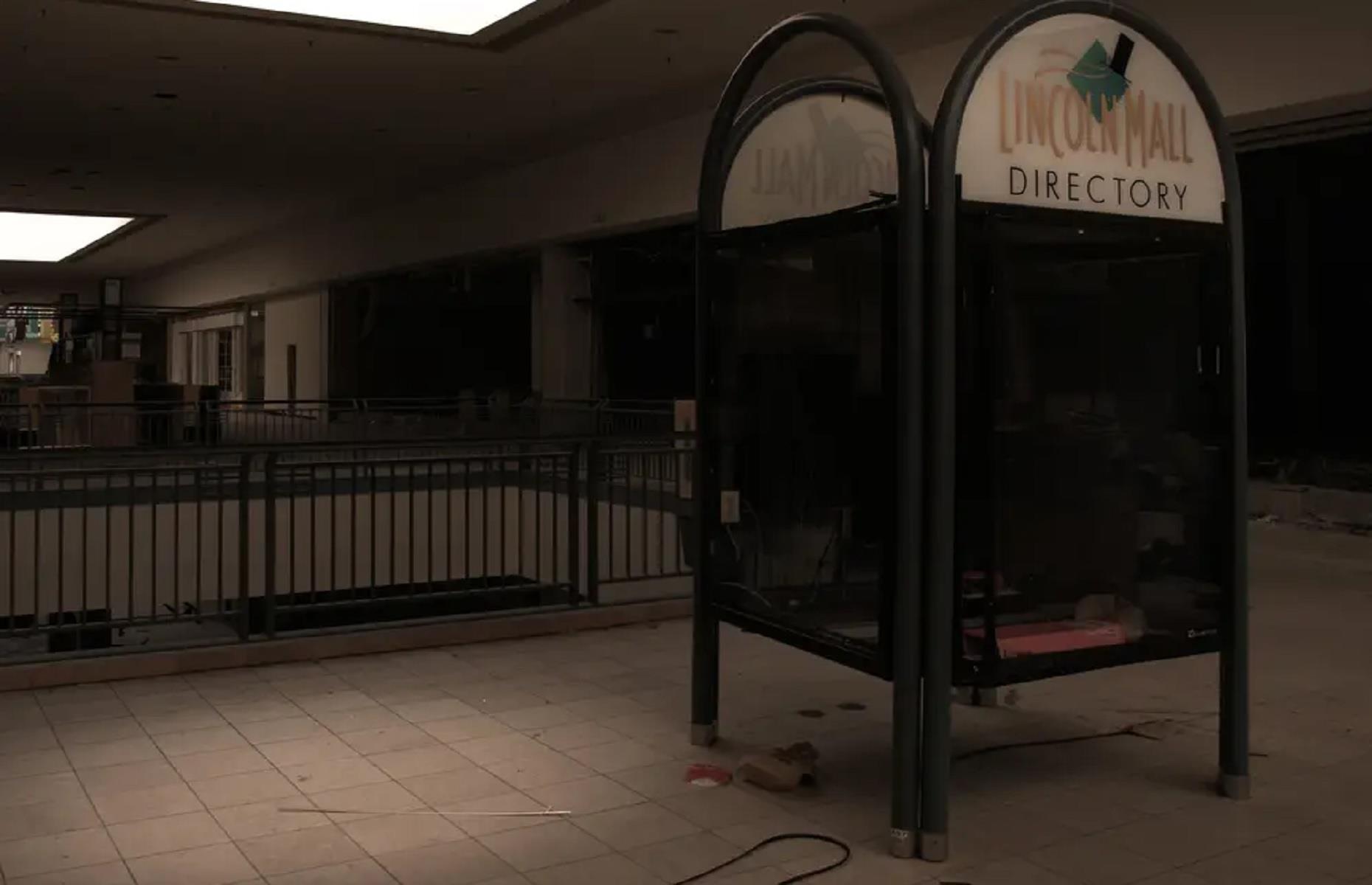 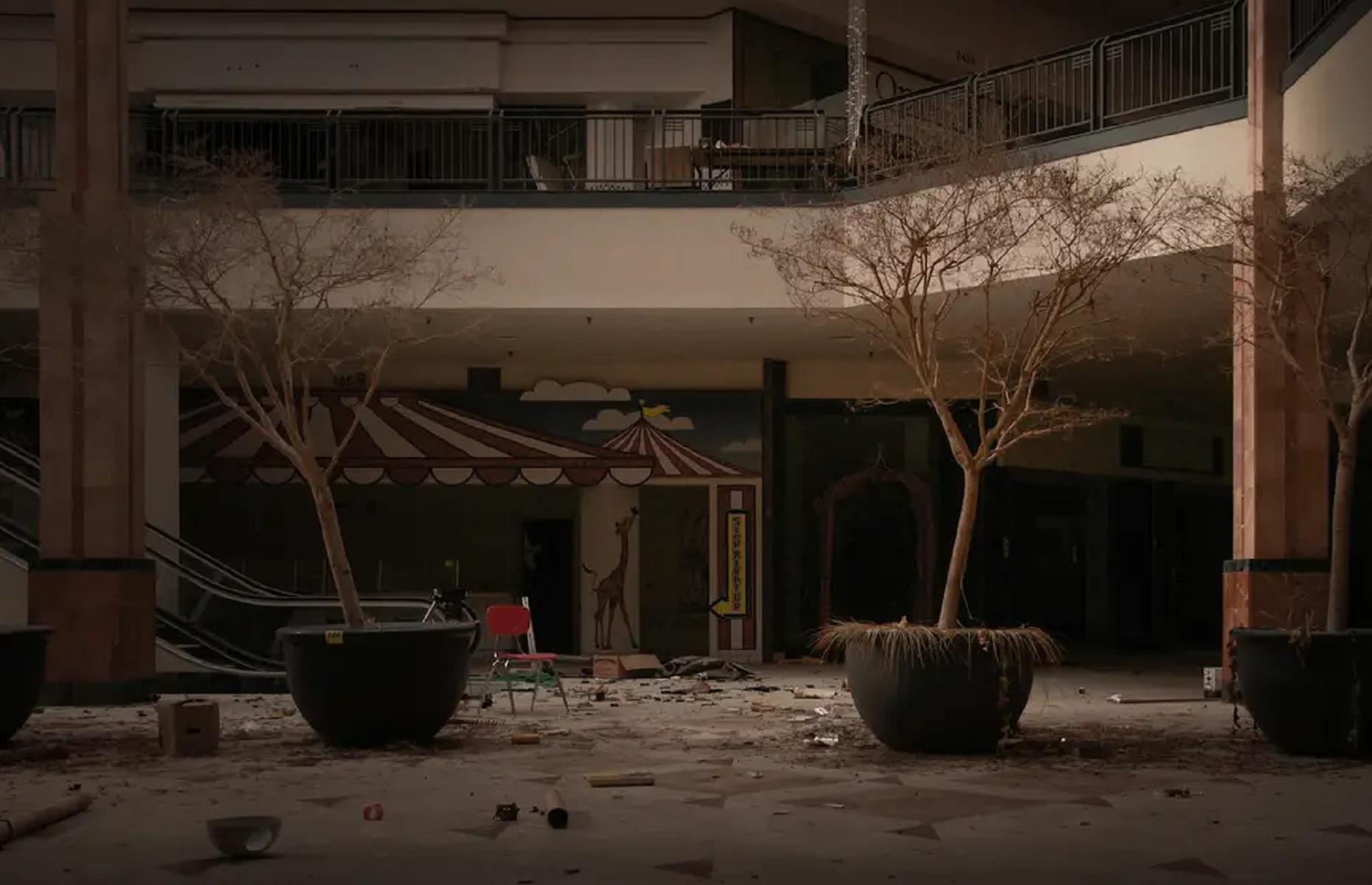 In the late 90s the mall began to struggle and by 2000 three of its four original anchor stores had left, with other tenants making an exit as well. Although Sears moved into the former Wieboldt's store, it wasn't enough to keep Lincoln Mall afloat. 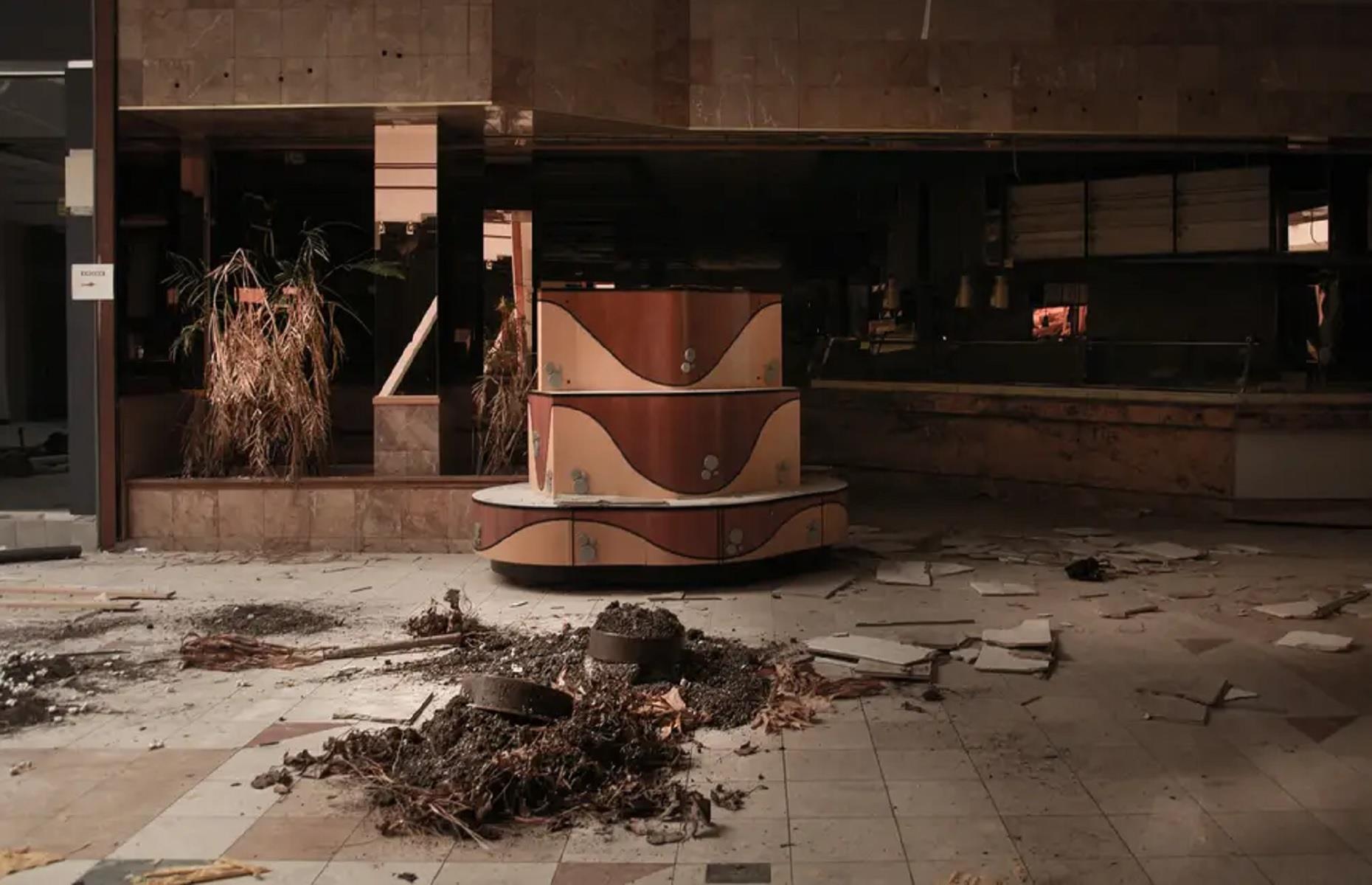 In 2013 the Matteson authorities sued the owner of Lincoln Mall. The lawsuit claimed the site had violated more than 25 fire, safety and building codes, with hazards including faulty fire suppression system pipes, crumbling walls and exposed wiring.
Features 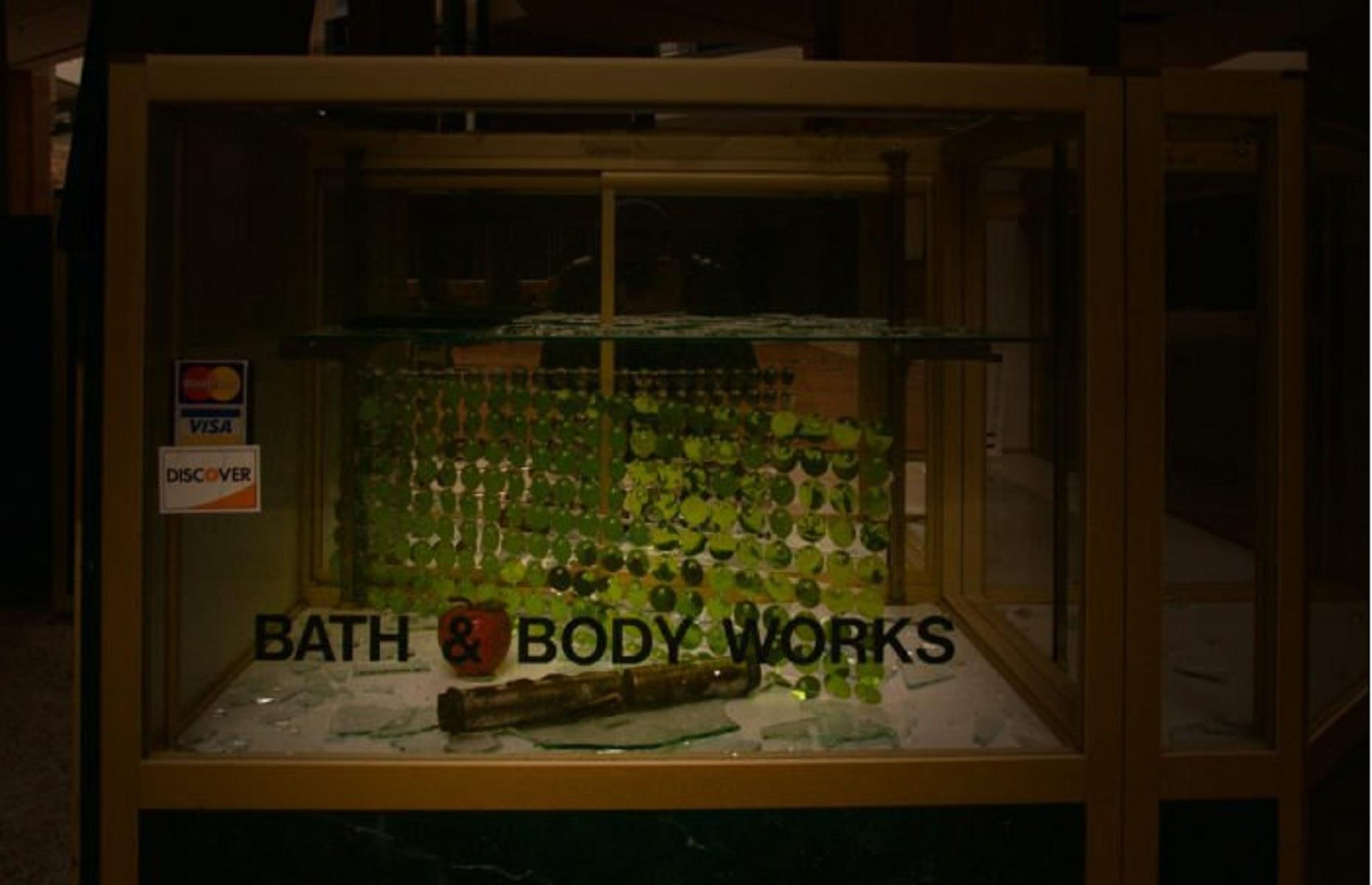 The owner of the mall, New York real estate developer Michael Kohan, told The Chicago Tribune that the business was losing around $2 million every year. Additionally, the safety violations had racked up fines of $9 million and to cover this debt the mall's remaining businesses – which included Bath & Body Works, Carson Pirie Scott, and Foot Locker – were told to pay taxes to cover the cost of necessary repairs. 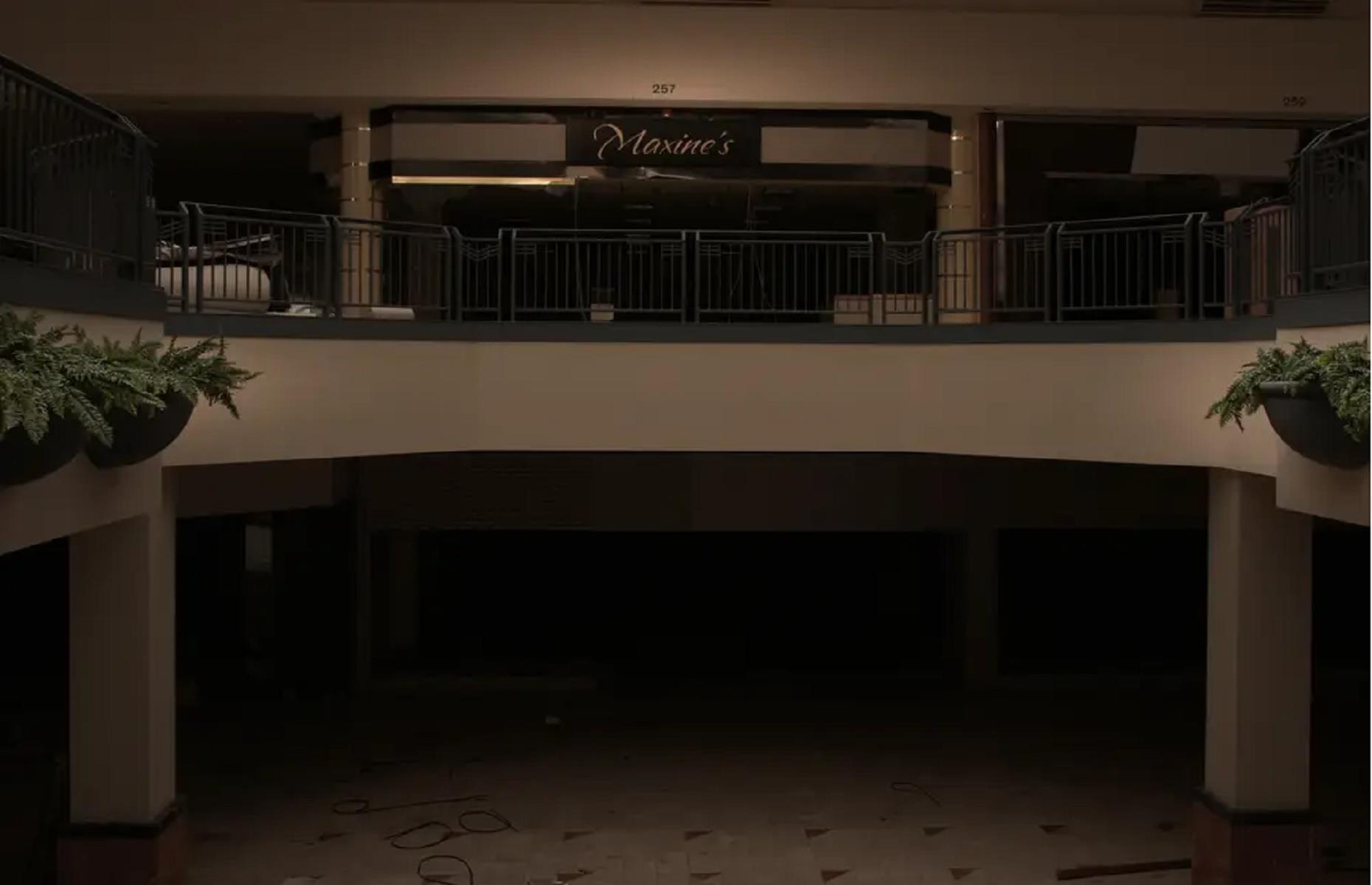 There was just one problem. The 45 businesses that remained on the premises didn't generate enough revenue to pay the fines, which meant the owner couldn't renovate the site. According to Matteson Village Administrator Brian Mitchell, Lincoln Mall was "a disaster waiting the happen. The people working and shopping in the mall [were] in harm's way."
Features By November 2014, Michael Kohan reportedly owed more than $10 million in unpaid taxes and fines. With little sign that the businesses would become profitable, a Cook County judge ruled that Lincoln Mall should close after the Christmas holiday season – and three years later, the remaining structures were demolished.
Features 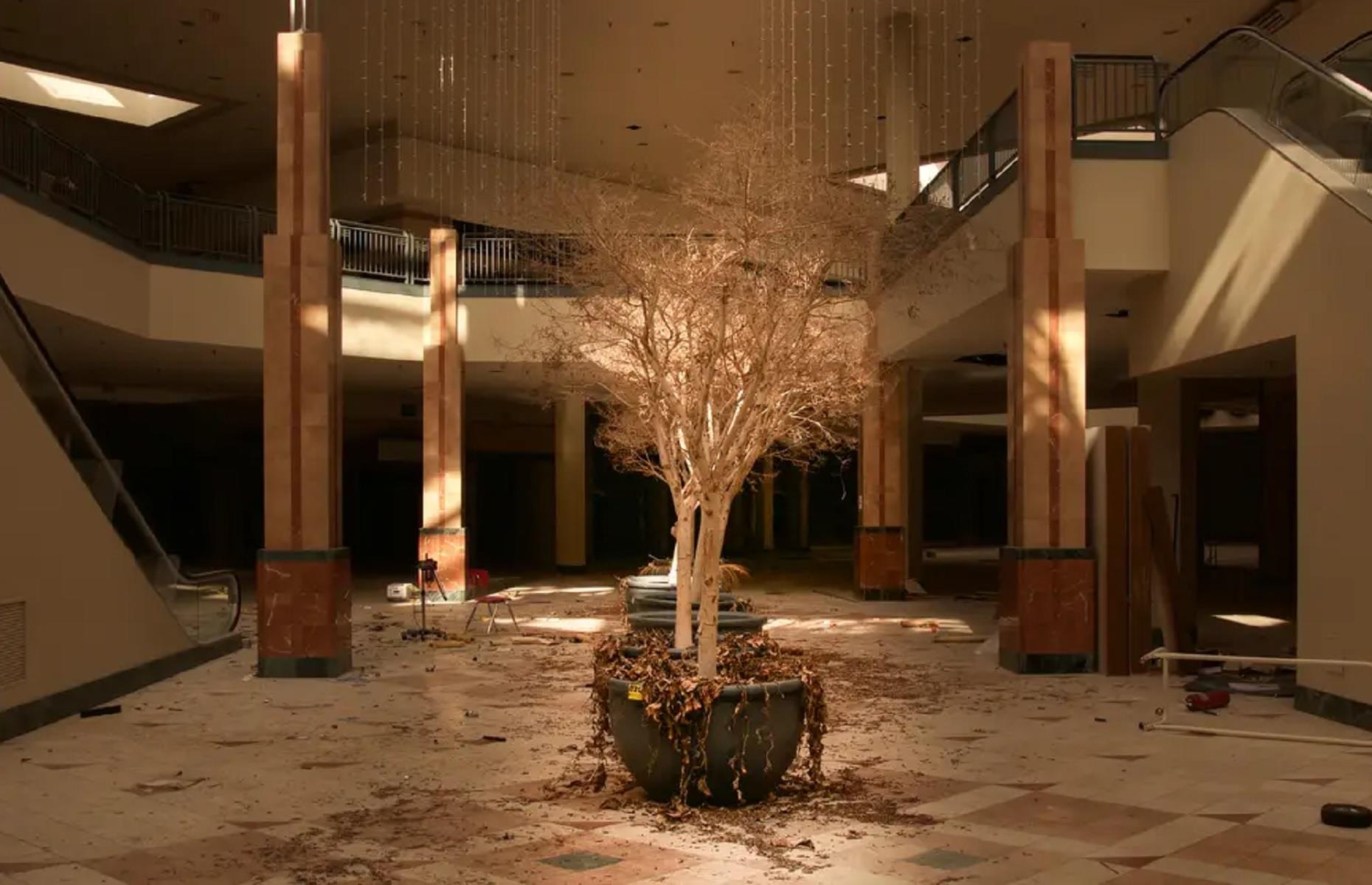 In early 2020 a development group proposed building a $300 million casino on the site of the former Lincoln Mall. The plan had enthusiastic local support and become one of two finalists for a casino license in December 2021. However, the Illinois Gaming Board did not chose Matteson in the end. The site remains vacant. 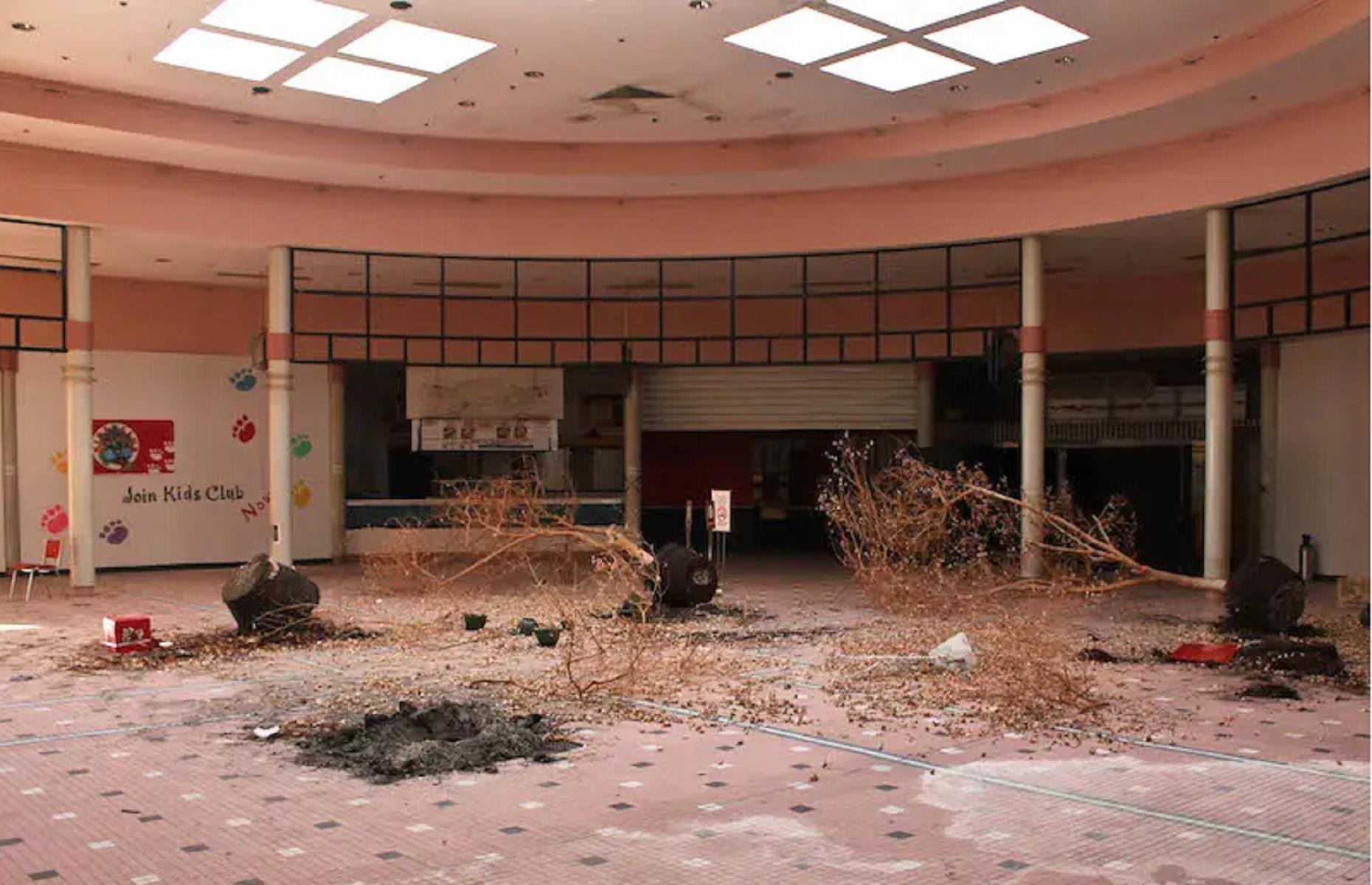 Located in Chesterfield County, Virginia, the Cloverleaf Mall opened in 1972. Like many of the malls on this list, its main anchor store was JCPenney. Around 45 other stores were open for business on the mall's opening weekend, almost half of which were women's clothing stores. Developer Leonard Farber was keen to impress his target market, reportedly "installing carpeting to cushion women's legs so they could shop longer," according to The Chesterfield Observer.

Cloverleaf was the first large-scale regional shopping mall in the area and it thrived during the 70s and 80s. A new movie theater and food court were added, while Thalhimers took over an extra floor. But the mall's heyday was short-lived, and by the early 1990s the mall was gaining a reputation for drawing a dangerous crowd... 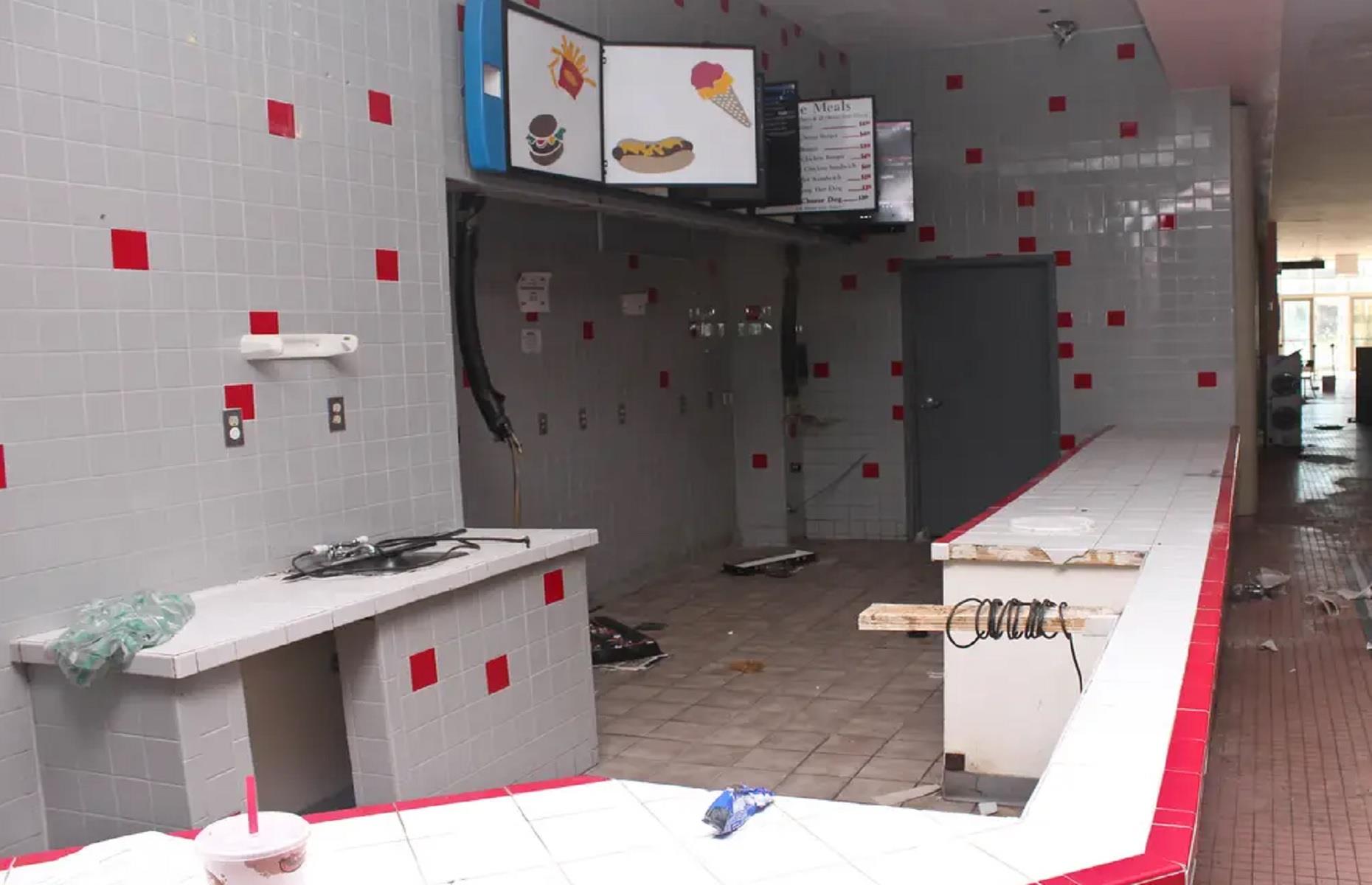 At first local residents were reportedly worried about gangs of youths with "huge baggy pants and chains hanging off their belts." But things took a far more sinister turn on 7 November 1996 when employees at the mall's All for One store were found stabbed to death in a back office. The victims, Cheryl Edwards and Charlita Singleton, were young mothers who had apparently been targeted after a robbery. The murderers responsible have never been caught. 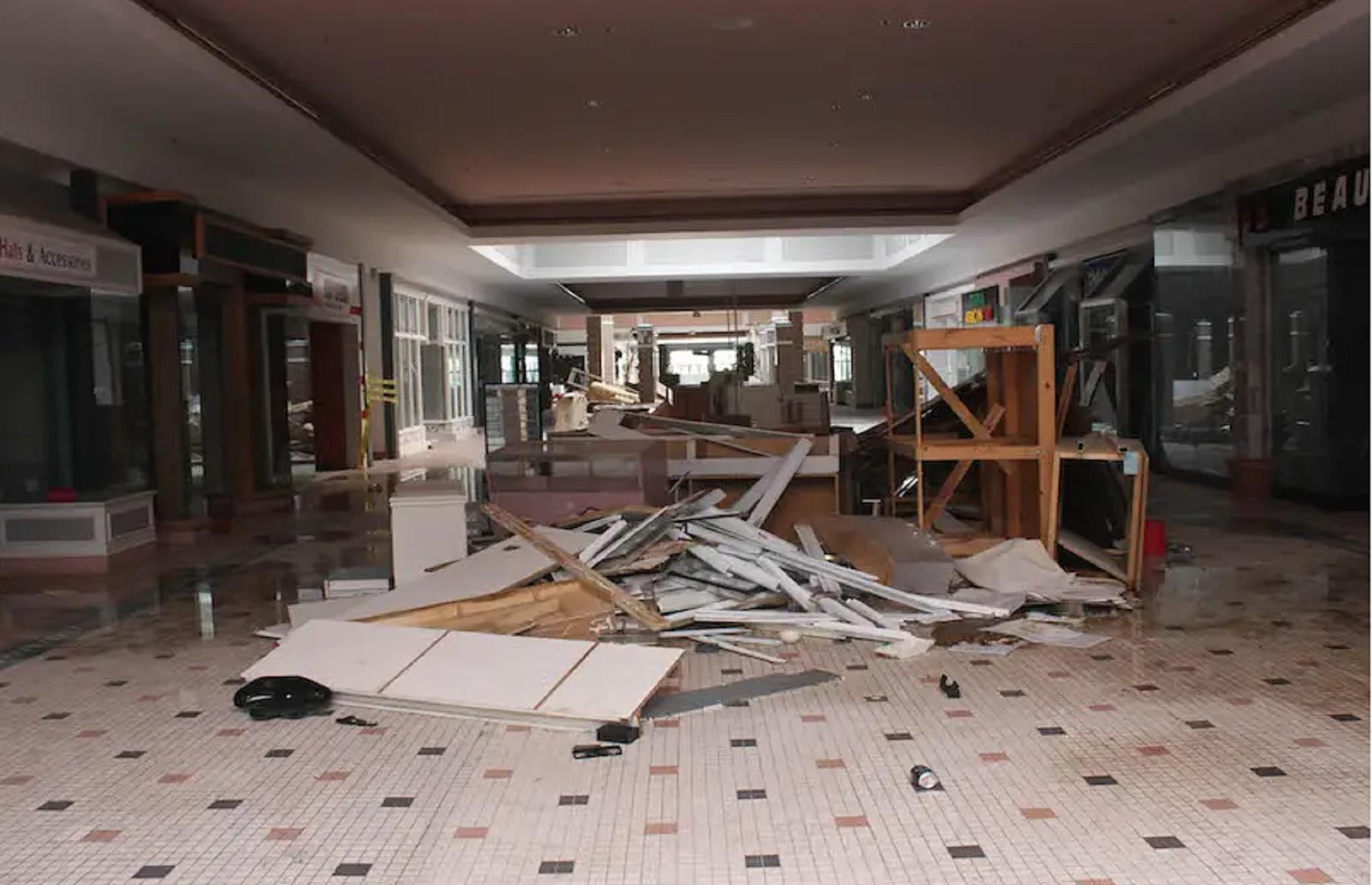 Cloverleaf Mall declined further in the 2000s as its anchor stores decided not to renew their leases. By 2005 various institutions were applying to buy the site. These even included a local church, which according to some sources wanted to turn Cloverleaf into a sanctuary. Chesterfield County eventually swooped in to purchase the mall and closed it for good in 2008. It stood empty for three years until its demolition in 2011. In its place stands Stonebridge Shopping Center, an 8.1-acre retail center that has recently been sold to new developers for $12 million. 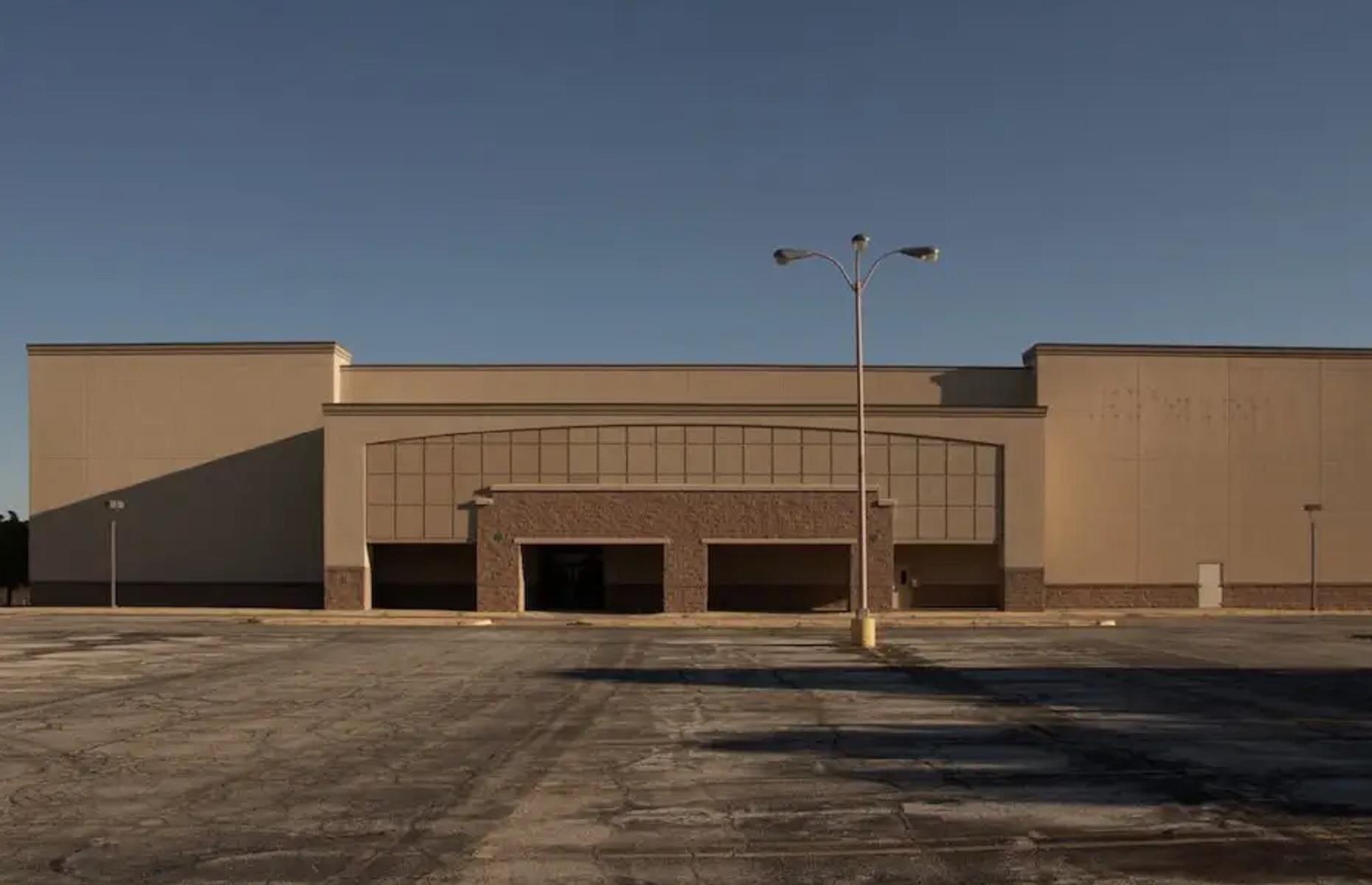 According to photographer Seph Lawless, the Metro North Shopping Center in Kansas City, Missouri was "by far the creepiest mall" he's ever explored. The center opened in 1976 and at its peak it housed more than 150 retailers across 1.3 million square feet.
Features 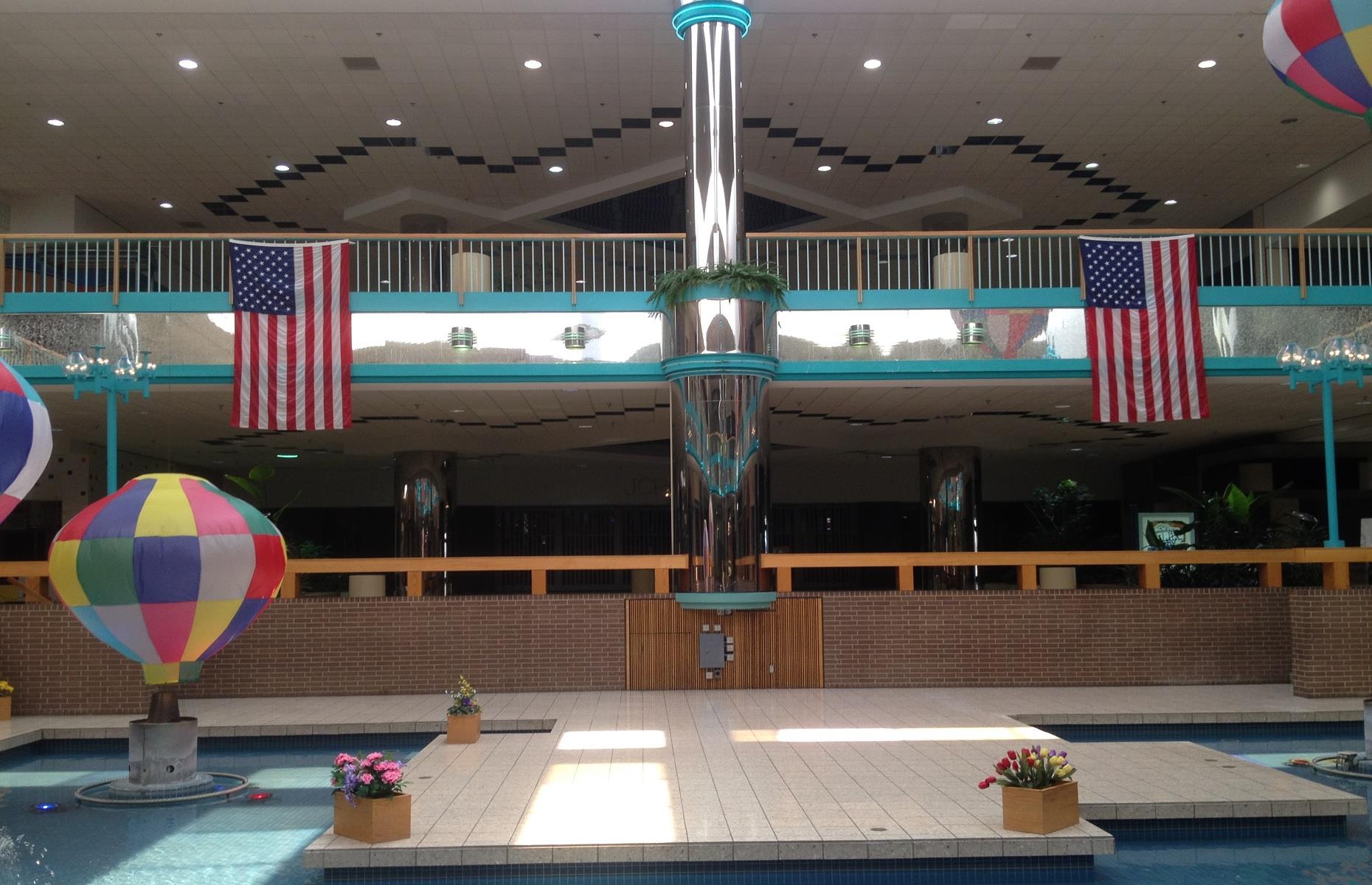 Metro North was initially the area's go-to shopping destination, featuring a center court complete with a decorative pool. There were even four colorful hot air balloons that floated up and down from the ceiling. Pictured is the mall's pool area in 2012, two years before the site closed its doors for the final time.
Features 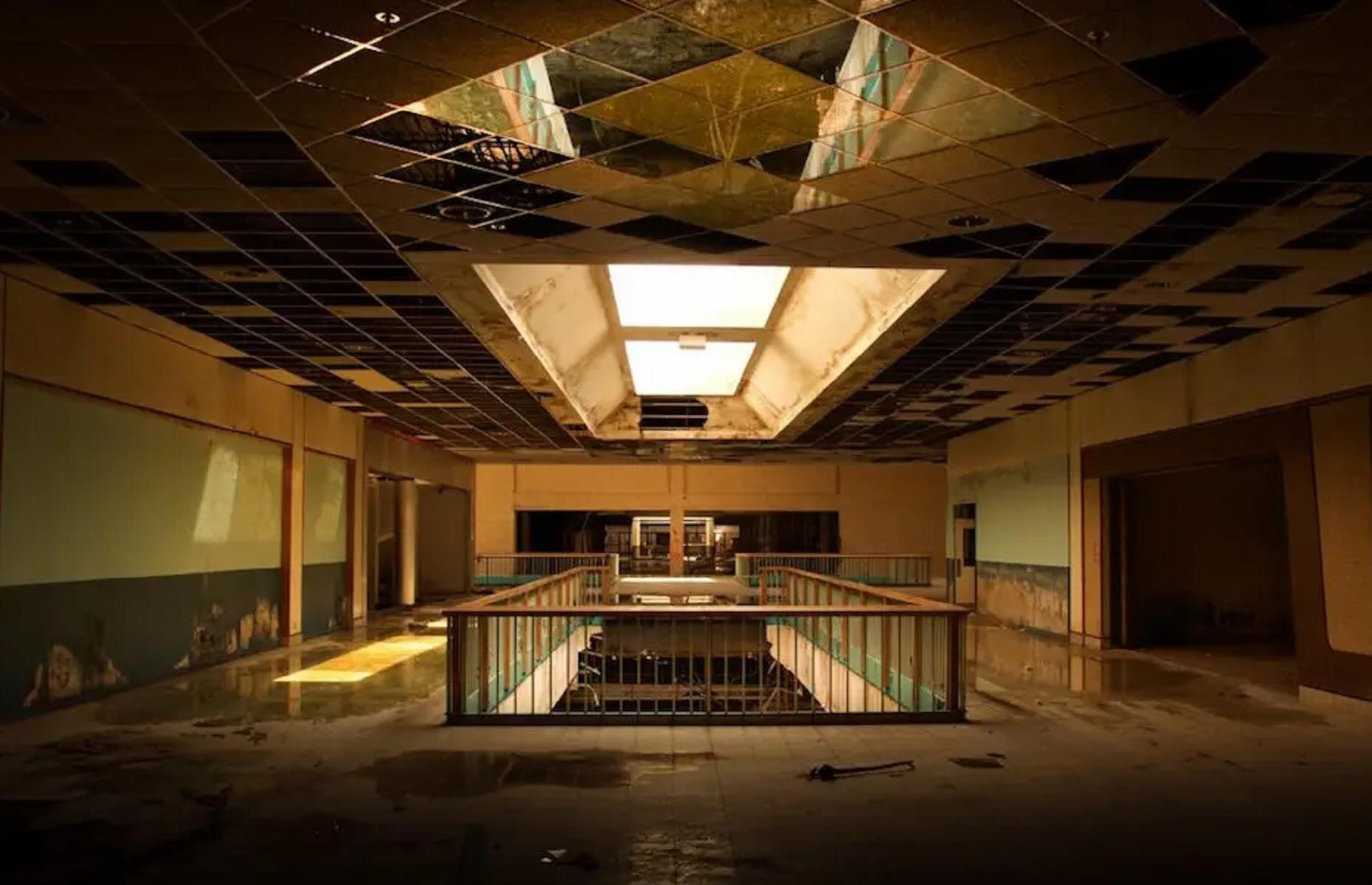 A shadow of its former self, the Metro North Shopping Center fell on hard times in the 2000s. Its ailing anchor stores moved out of the premises and by 2007 developers were debating how to save the once-bustling mall.
Features 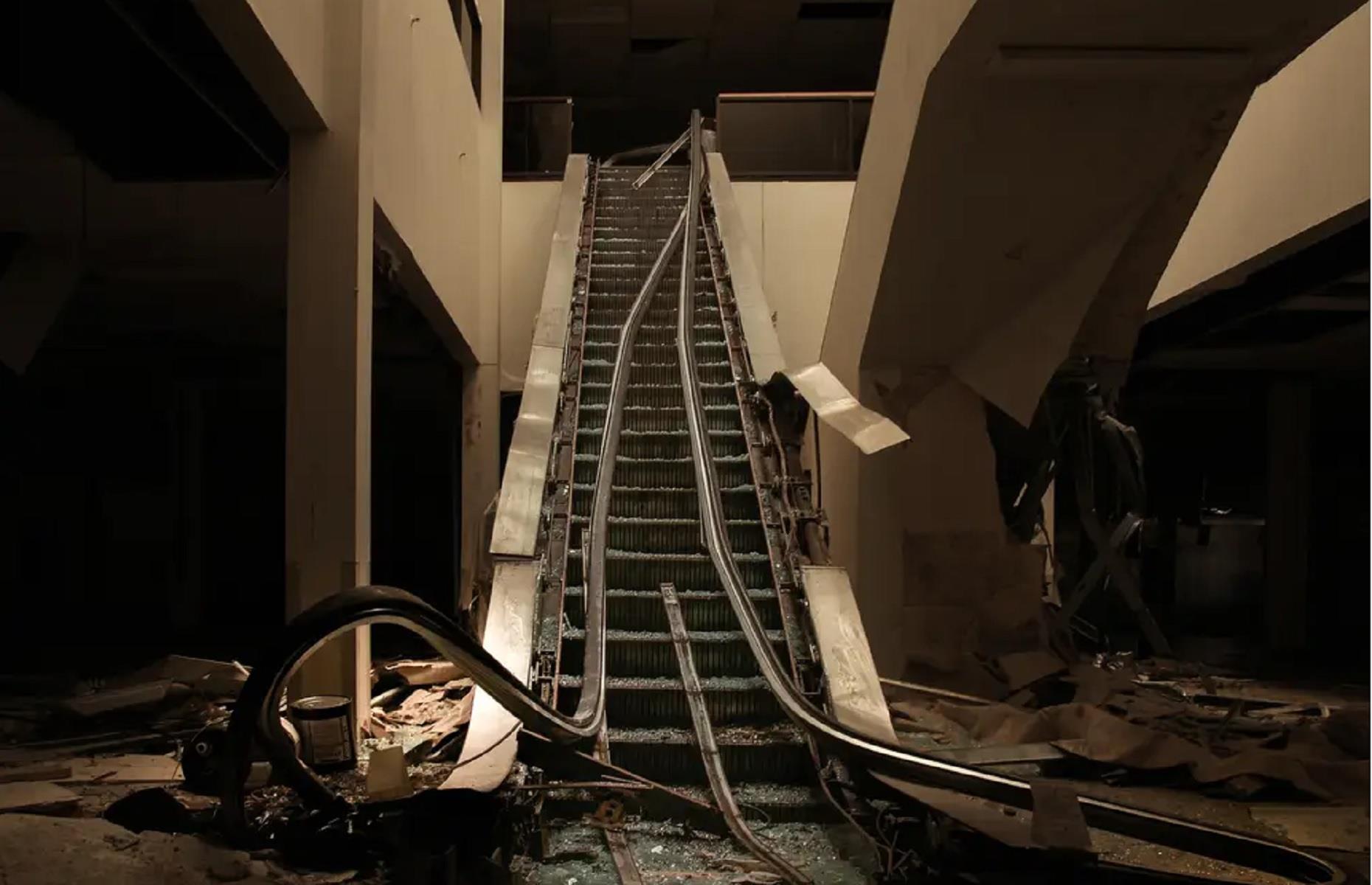 After various last-ditch attempts to reinvigorate the mall failed, the Metro North Shopping Center was closed for good in 2014. At the time developers planned to launch a $200 million renovation plan that would turn the site into an open-air retail hub. However, this plan was eventually abandoned. The mall was finally demolished in 2017 and a golf and entertainment complex has now been built in its place.

You can see more of photographer Seph Lawless's abandoned places photography and buy his books at sephlawless.com.