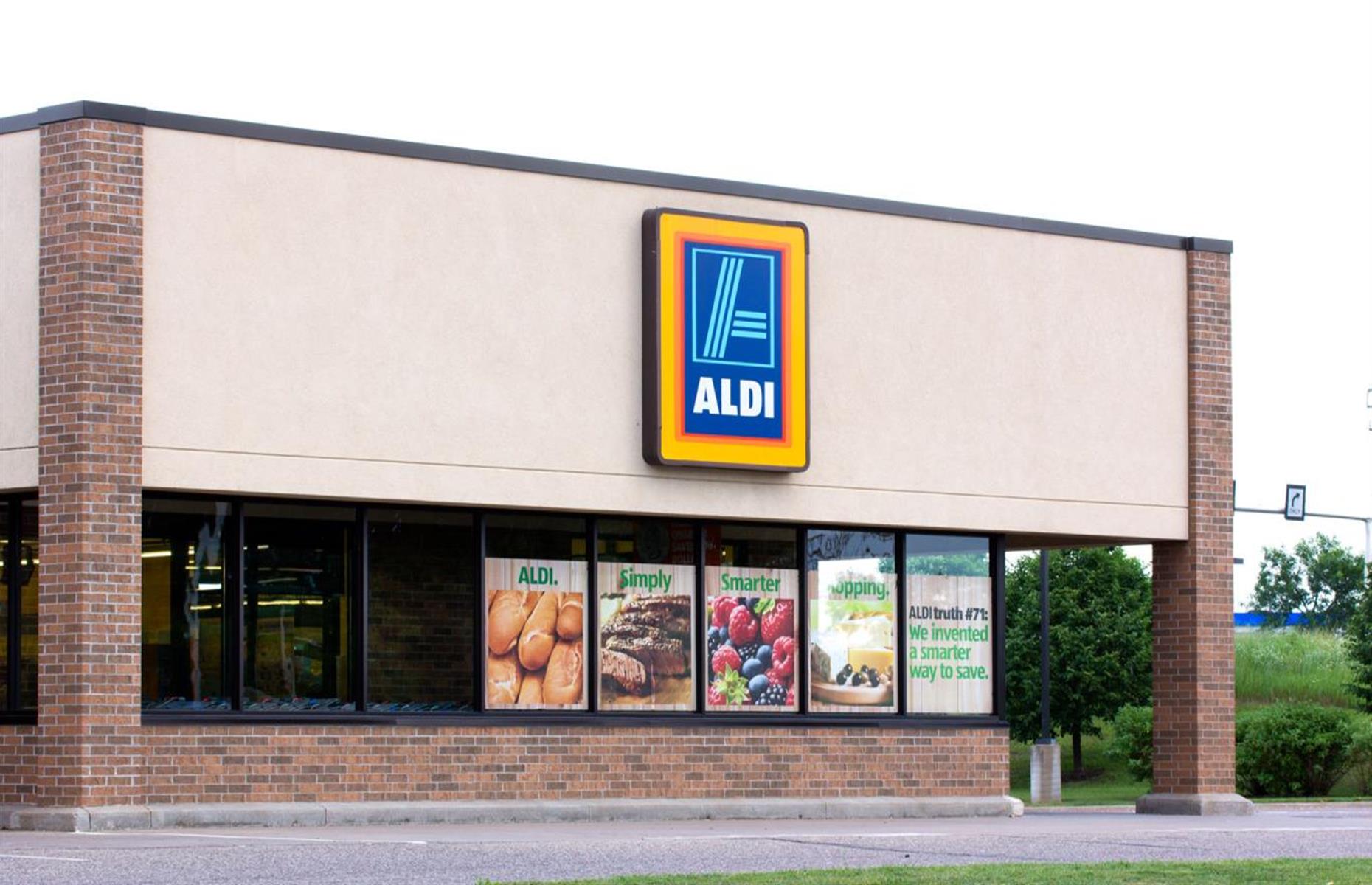 From a single store in a German city to over 2,000 stores in the US alone today, Aldi has been on a mission to take over the world recently. Click or scroll though to find out how the discount store got so big.
Features 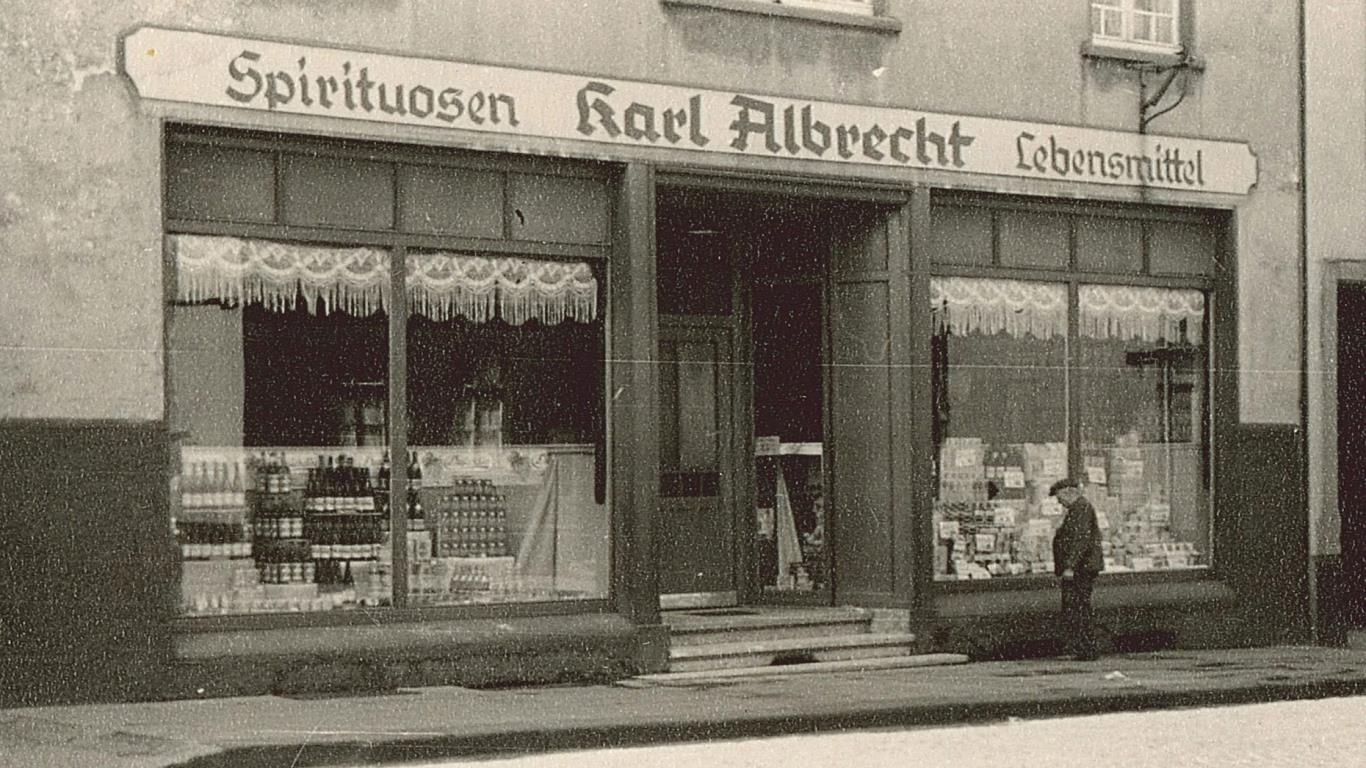 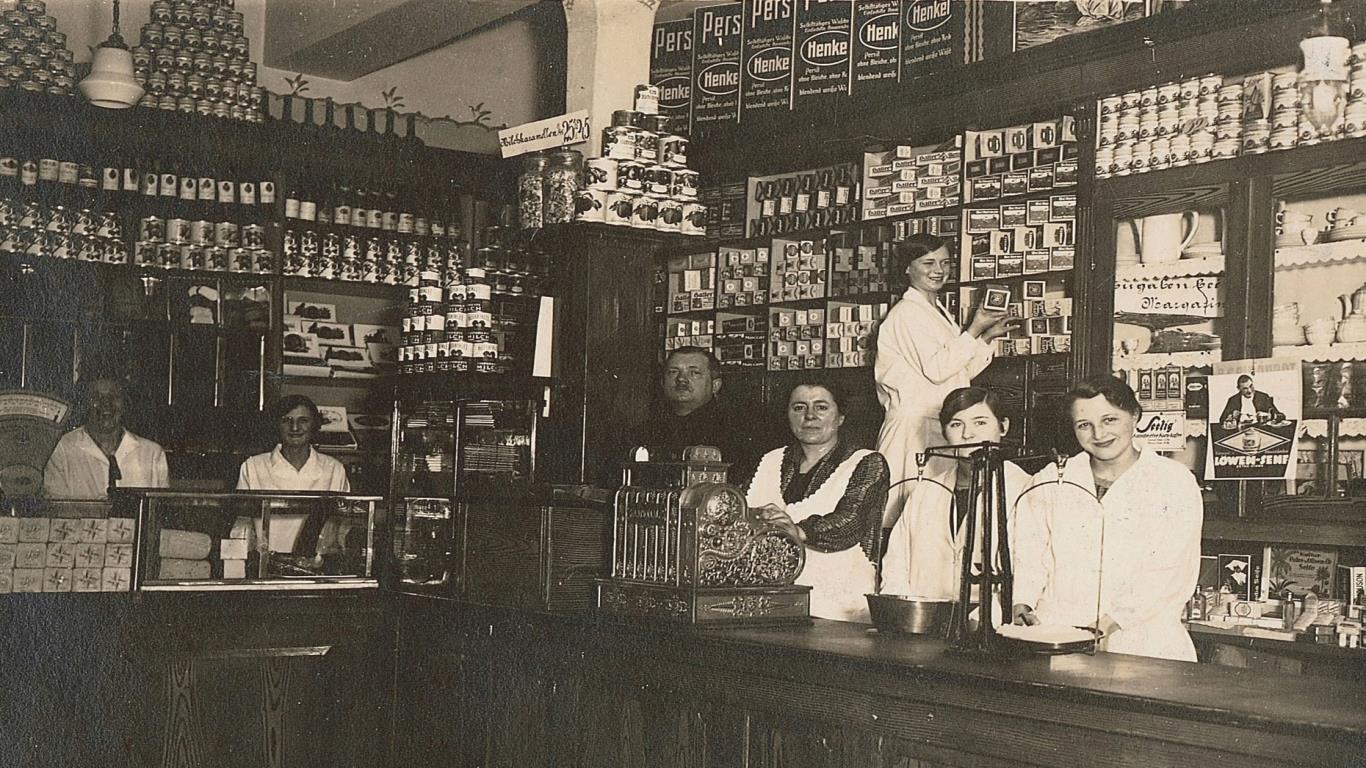 Not long after the end of World War II, Anna's sons Karl and Theo took over their mother's business and transformed it into 'the first discount store in the world'.
Features 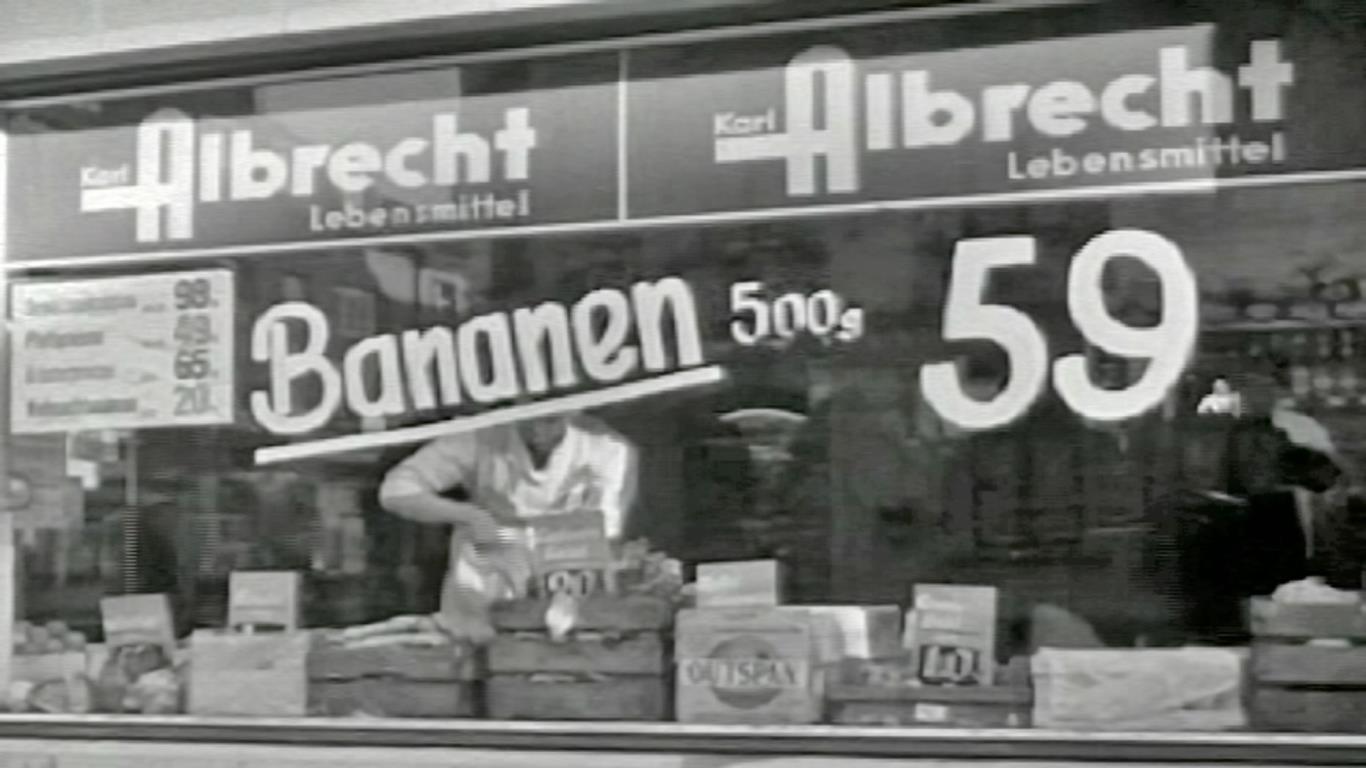 The brothers founded Albrecht KG in 1948, opening four stores in the local area not long after.
Features 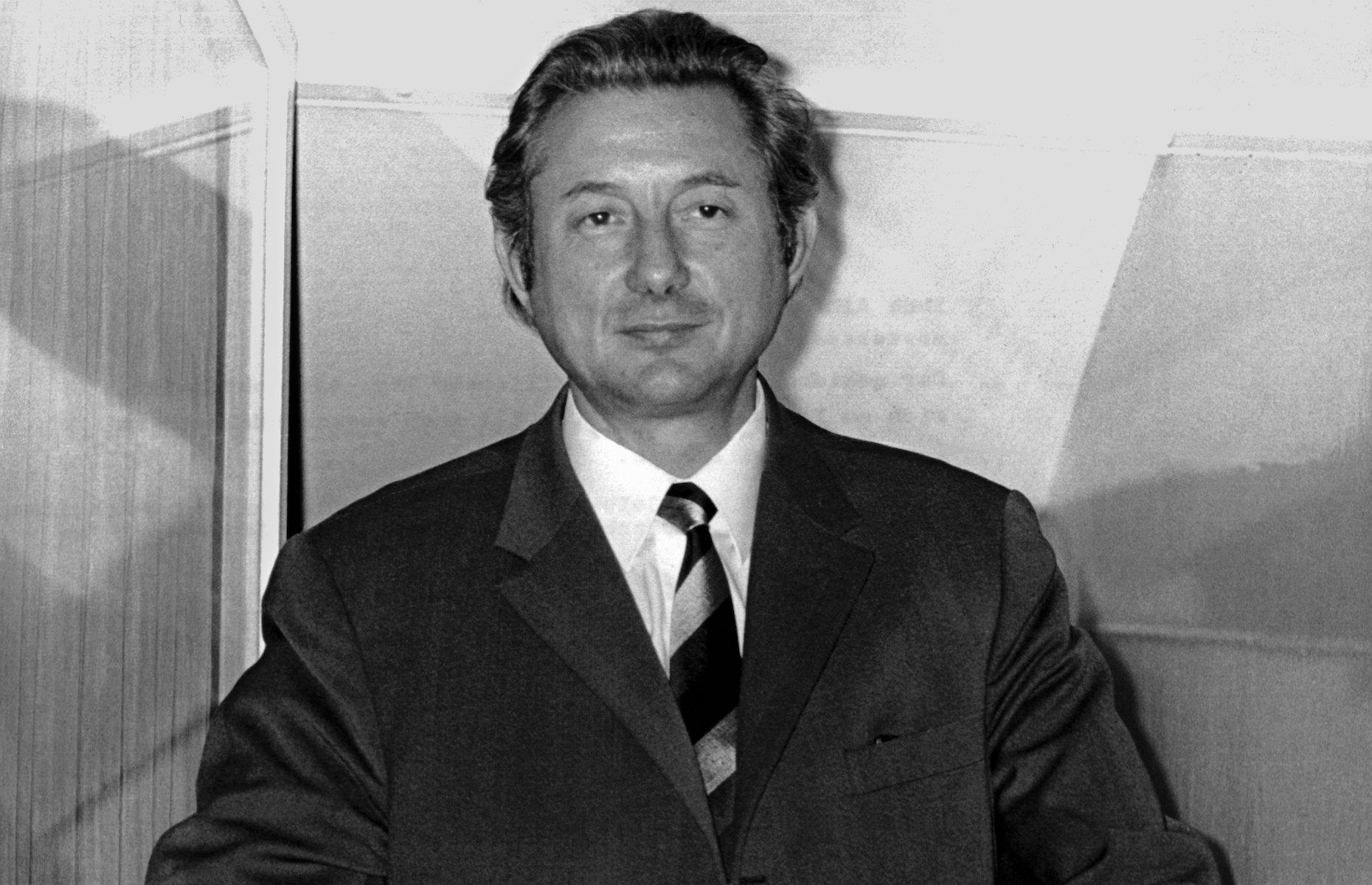 The family as a whole were noted for their thrifty ways. Obsessed with saving money, Theo (pictured) was said to recycle used pencil stubs, wear old, worn suits and eschew any form of luxury even after he had made his fortune. However, the thrift-conscious brothers devised a simple yet super-successful business plan: they kept prices rock-bottom by only stocking non-perishable items and quickly removing slow-sellers from the shelves.

Now read about the stingiest rich people of all time 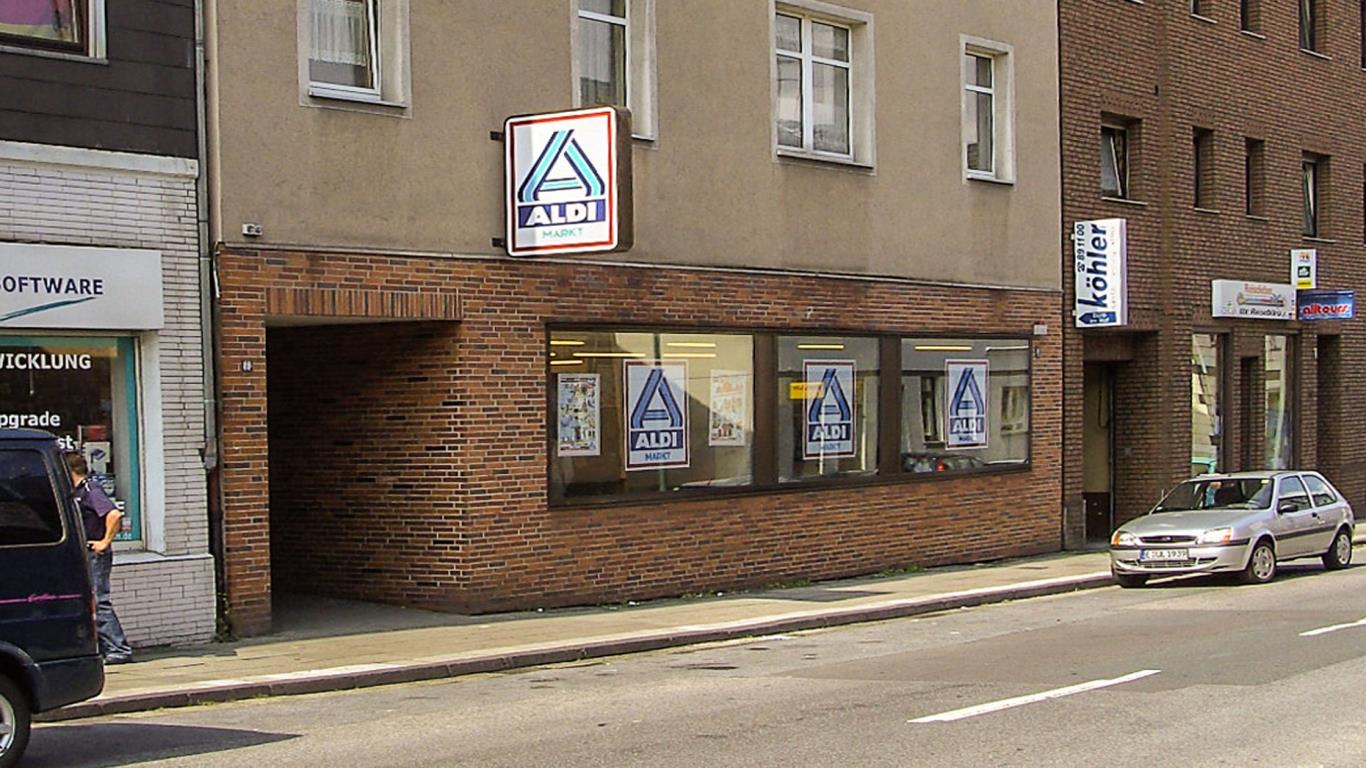 To avoid paying expensive overheads and to build their business slowly but surely, Theo and Karl Albrecht decided to concentrate on developing a chain of small supermarkets. The compact stores' popularity spread through word of mouth – the Albrechts kept costs down by refusing to pay for advertising. By 1950, they owned 13 stores in Germany's Ruhr Valley.
Features 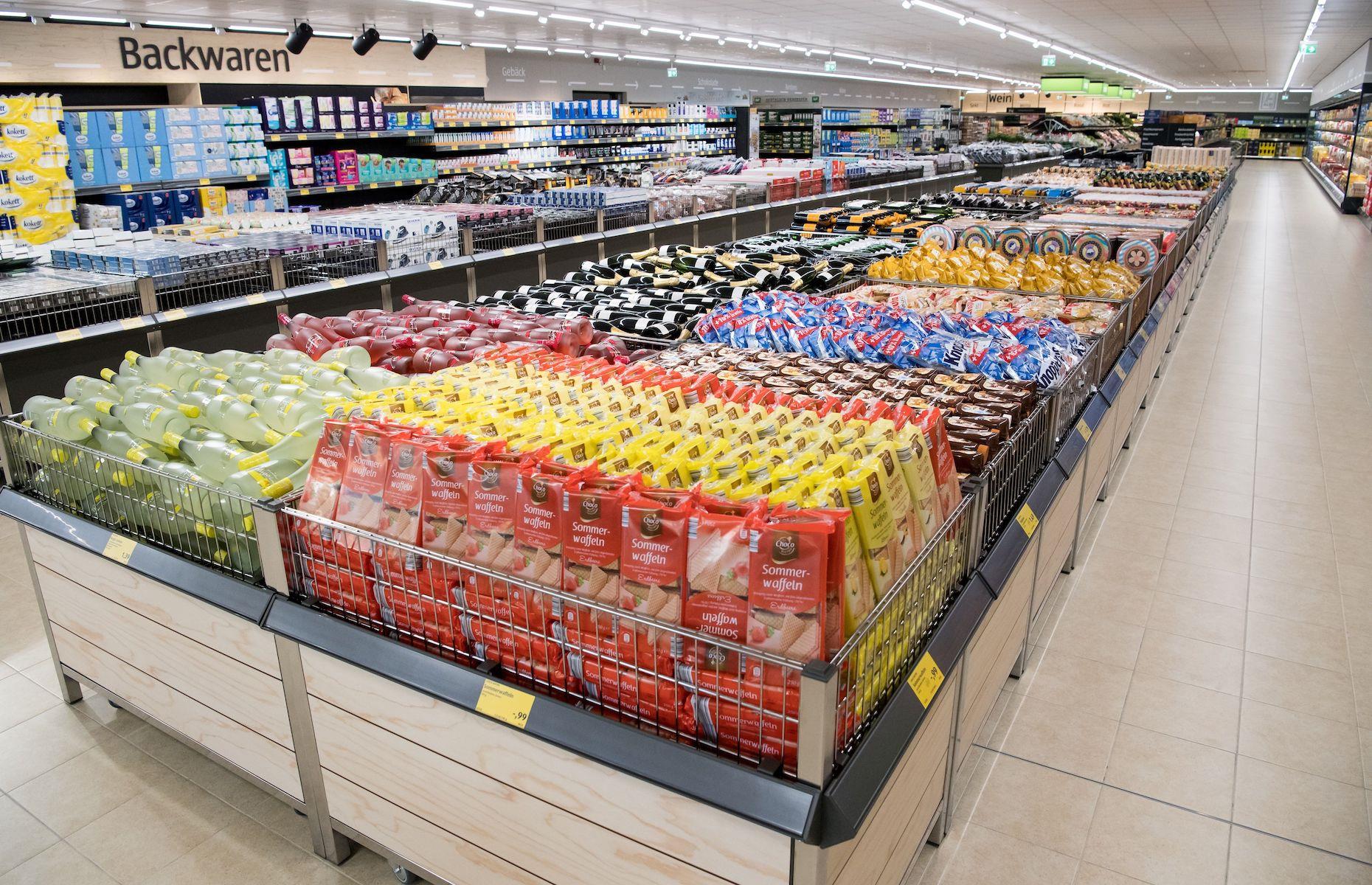 That same year, the brothers split the chain into two separate groups after falling out over whether they should sell tobacco products. Theo headed Albrecht-Diskont Nord, which sold them, while Karl became the CEO of Albrecht-Diskont Süd, which did not.
Features 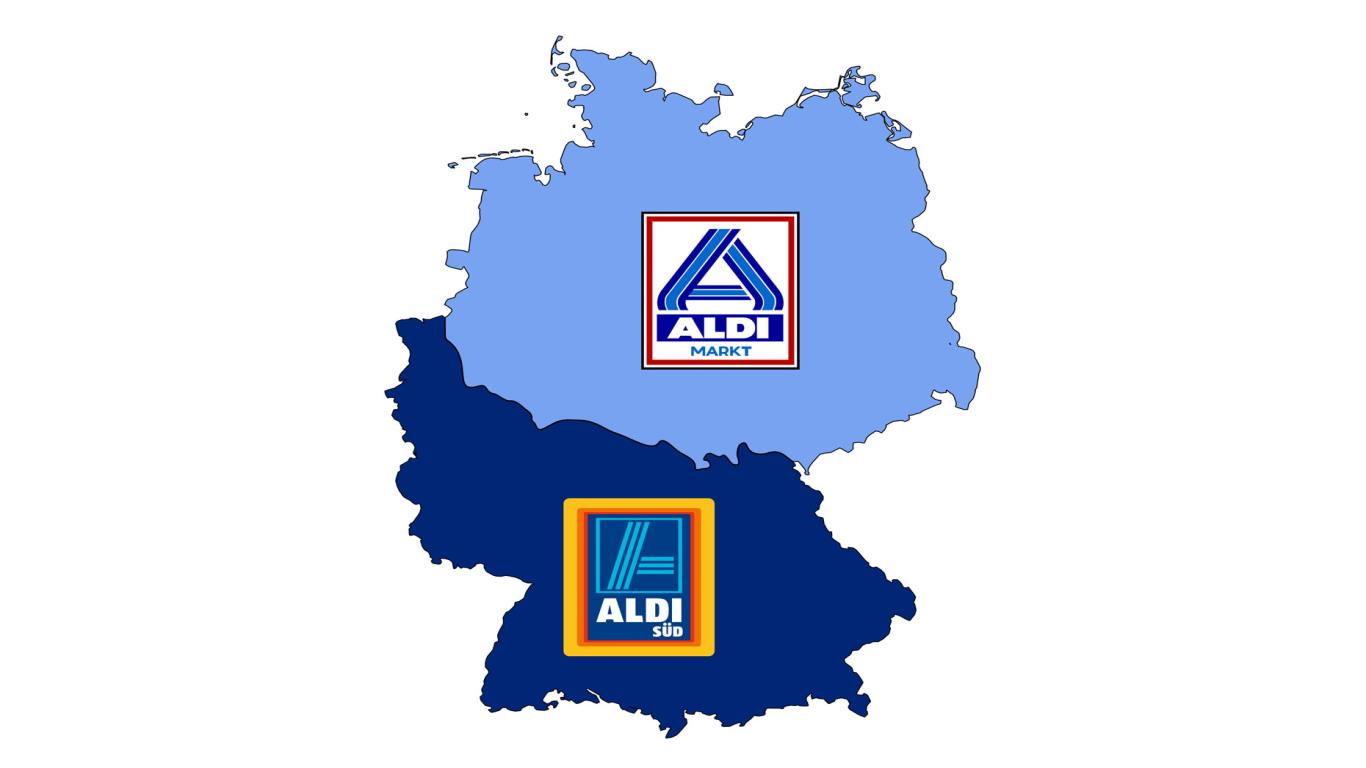 In 1962, the brothers, who were still working together despite their disagreement, decided to name the groups Aldi Nord and Aldi Süd, taken from the first two letters of Albrecht and Diskont. Aldi Nord took over stores in the north of Germany while Aldi Süd became responsible for stores in the south. The border between the two became known as the 'Aldi Equator'. The two businesses became financially and legally separate in 1966. By this time, there were 200 Aldi Süd stores in Germany.
Features 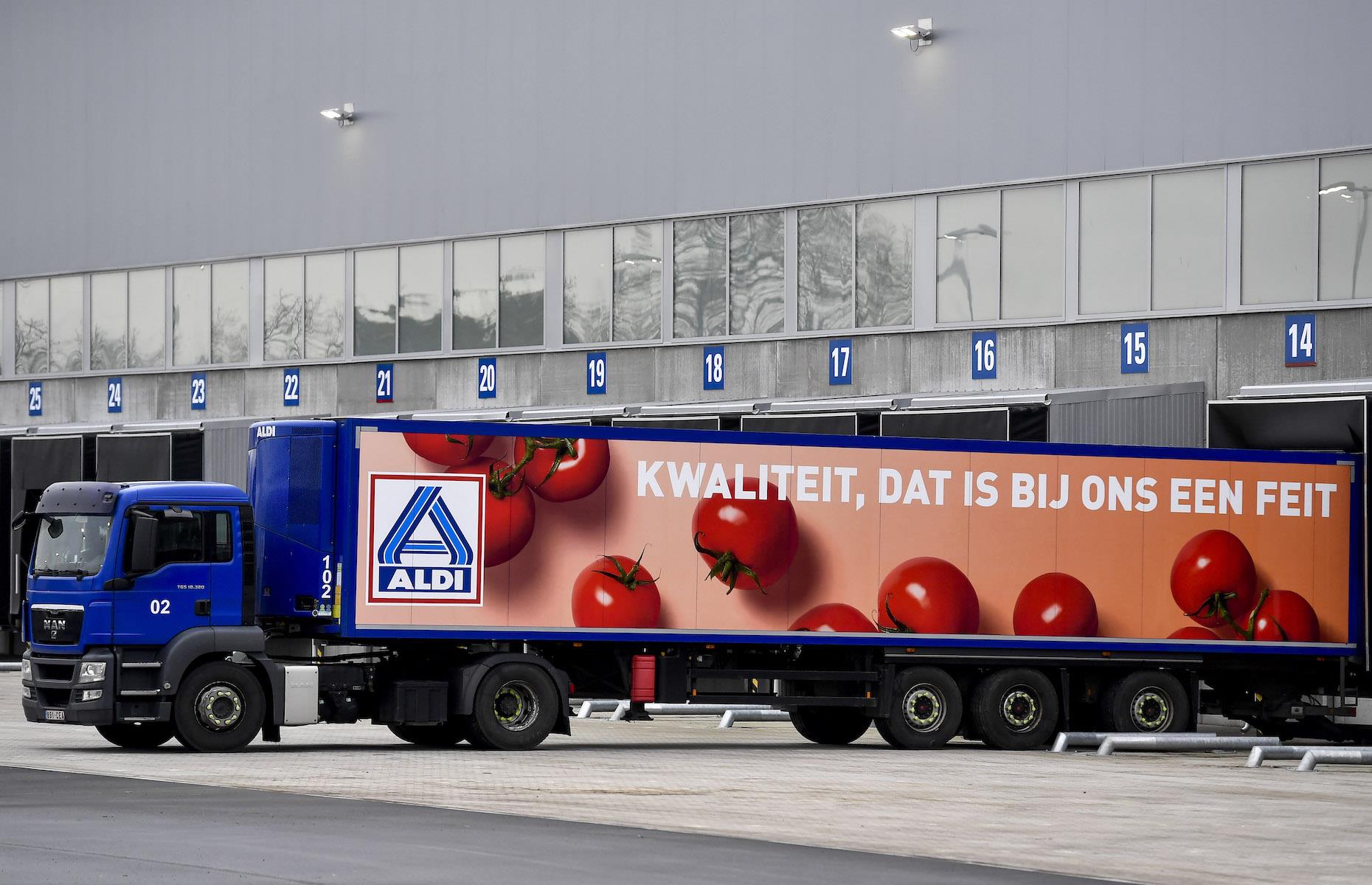 The Aldi group made its first forays into the international market in 1967 when Aldi Süd took over Hofer, an Austrian grocery chain. Aldi Nord joined in when it expanded to Belgium in 1973.
Features 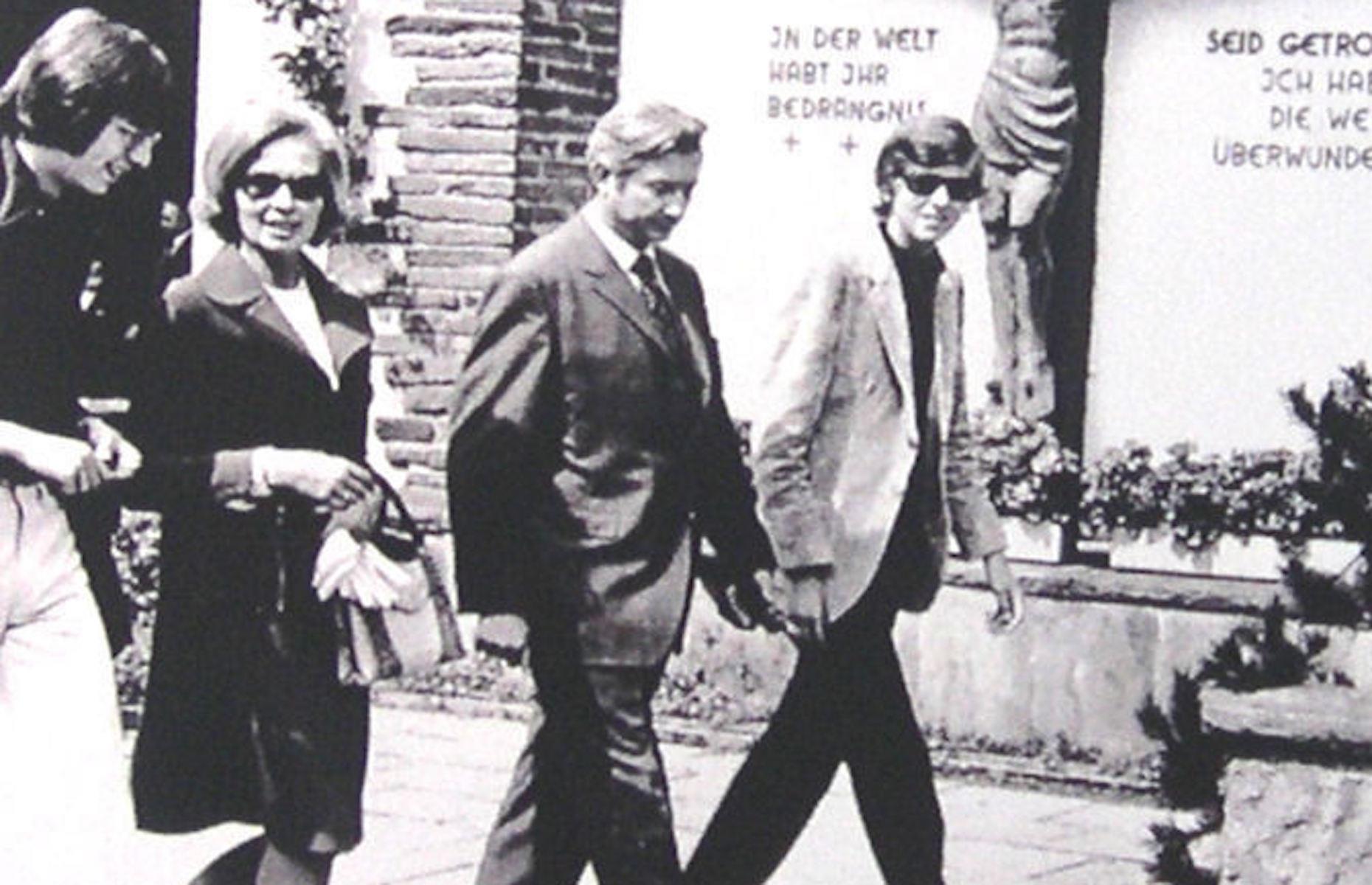 In 1971, Theo Albrecht (second from right, pictured with his family) was kidnapped by a disgruntled lawyer called Heinz-Joachim Ollenburg and his accomplice Paul Kro, and held at gunpoint. A ransom of DM7 million, which was £1.4 million at the time, the equivalent of £19.9 million ($25.4m) in today's money, was paid and Albrecht was released after 17 days in captivity. As money-conscious as ever, he later tried to claim the ransom as a tax-deductible expense.

Possibly as a consequence of the kidnap, the Albrechts became notorious for being extremely secretive about their private lives and Forbes dubbed Theo "more reclusive than a yeti". The last photo published of limelight-shunning Theo Albrecht alone dates way back to 1971, a day after he was released by his kidnappers, and the last picture of the brothers together was published in 1987. The brothers' relationship was captured by actors Arnd Klawitter (Theo Albrecht) and Christoph Bach (Karl Albrecht) in the docu-drama movie Die Aldi-Brüder in 2018 (pictured). 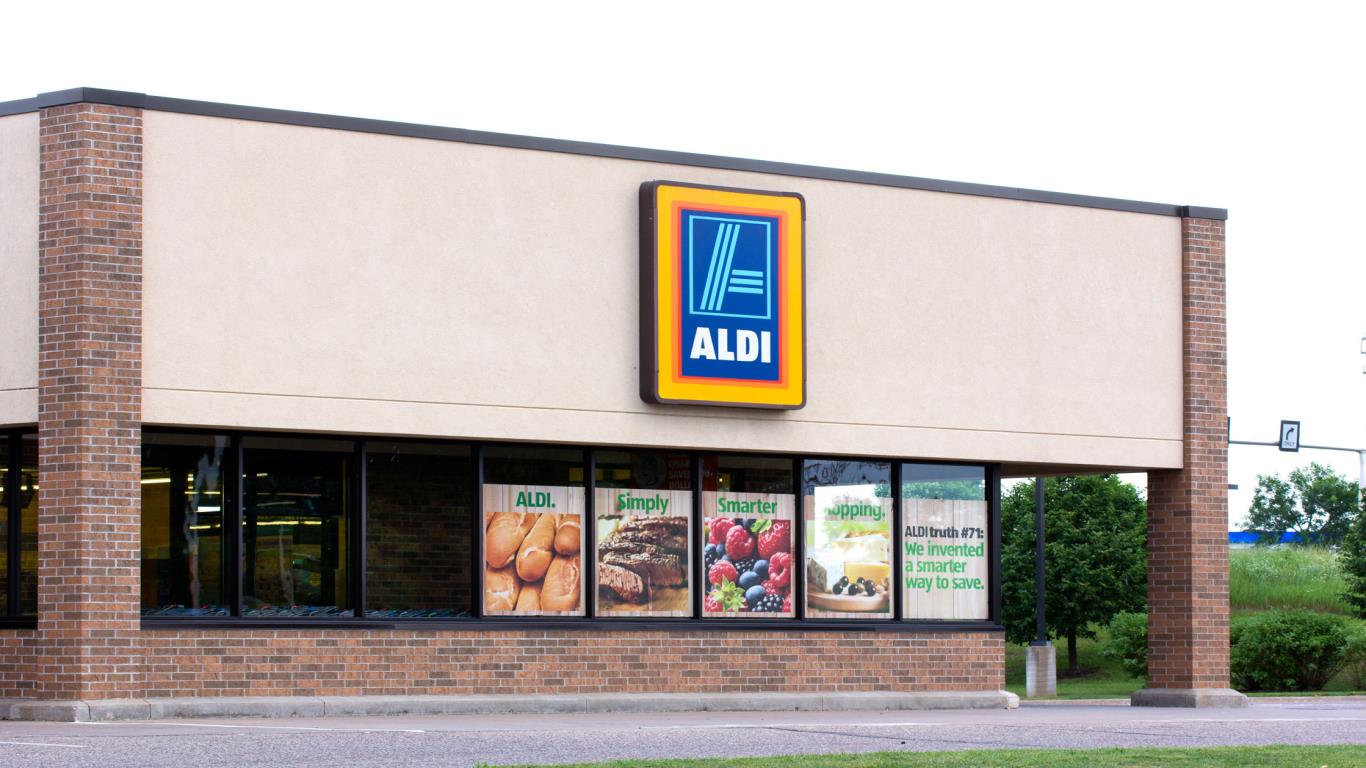 Aldi expanded to the US in 1976, opening its first store on American soil in Iowa. Headquartered in Batavia, Illinois, the company has nearly doubled in size in America over the past decade, reaching the 2,000-store mark in June with the opening of two new stores in California. This is all part of the grocer's $5 billion (£3.9bn) five-year expansion strategy in the US, initiated in 2017, which will see it grow to 2,500 stores nationwide by the end of 2022. It hopes to be the third largest store in the US, behind Walmart and Kroger, by this time too.

However, it's not just Aldi Süd that has a presence in the States. In 1979, a trust headed by Aldi Nord's Theo Albrecht bought trendy discount chain Trader Joe's, which now operates 475 stores in the US.

After the Iron Curtain fell, the Aldi group enjoyed a massive fast-paced expansion in the reunified Germany. Aldi Nord now operates 2,249 stores in the northern part of the country, while Aldi Süd has more than 1,900 stores across the south of Germany.

The group expanded to the UK in 1990, opening its first location in Birmingham. Aldi is now one of the fastest-growing supermarket chains in the nation, having recently opened its 890th store with plans to reach 1,200 stores by 2025. It was voted favourite supermarket retailer by readers of Good Housekeeping magazine for 2020, as well as winning the title of favourite wine retailer in the same awards. 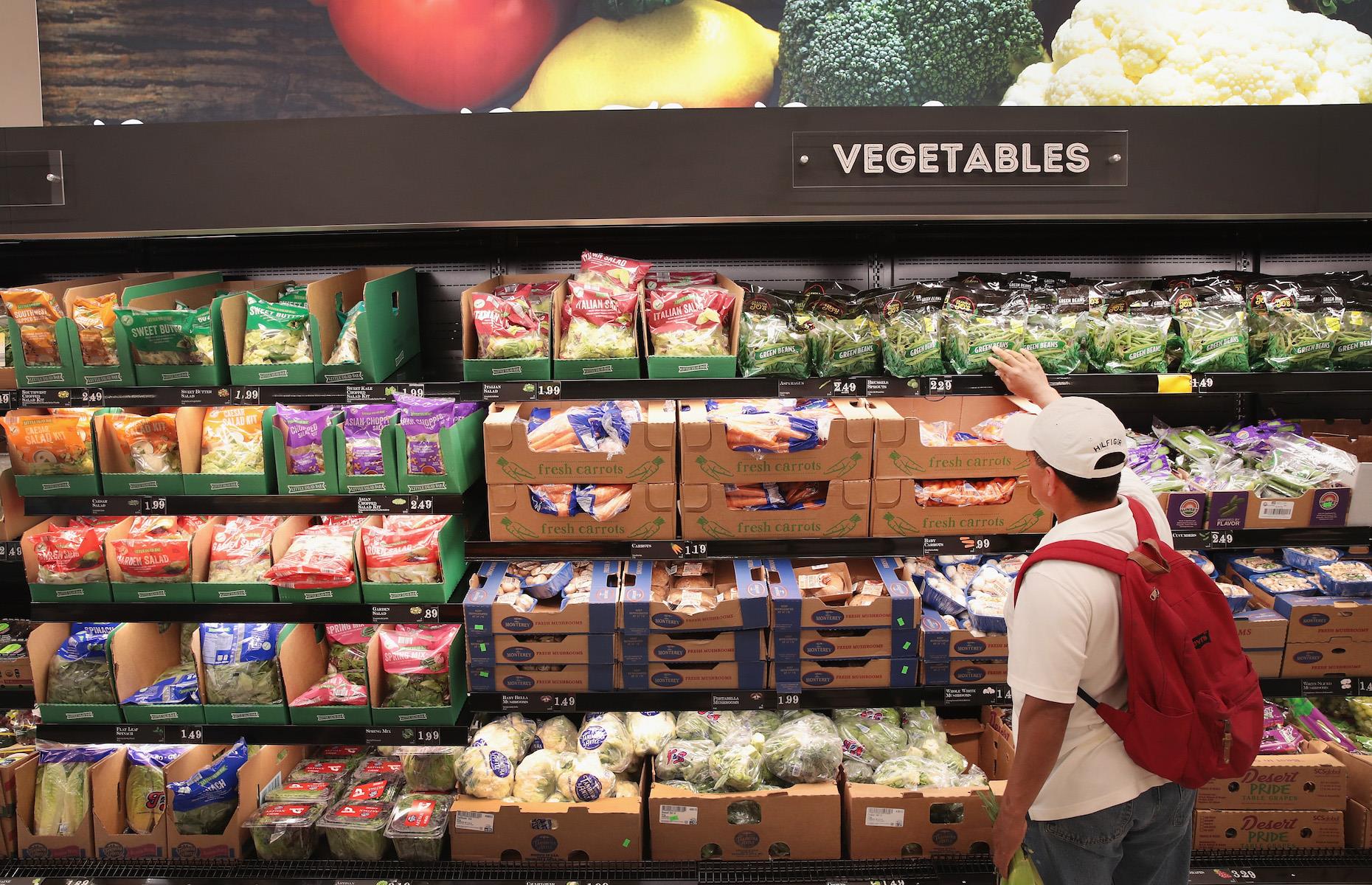 By 1991, the Aldi group was operating stores in eight European countries and the US. Over the next three decades the group expanded to Ireland, Australia, Spain, Slovenia, Switzerland, Portugal, Hungary and Poland.
Features 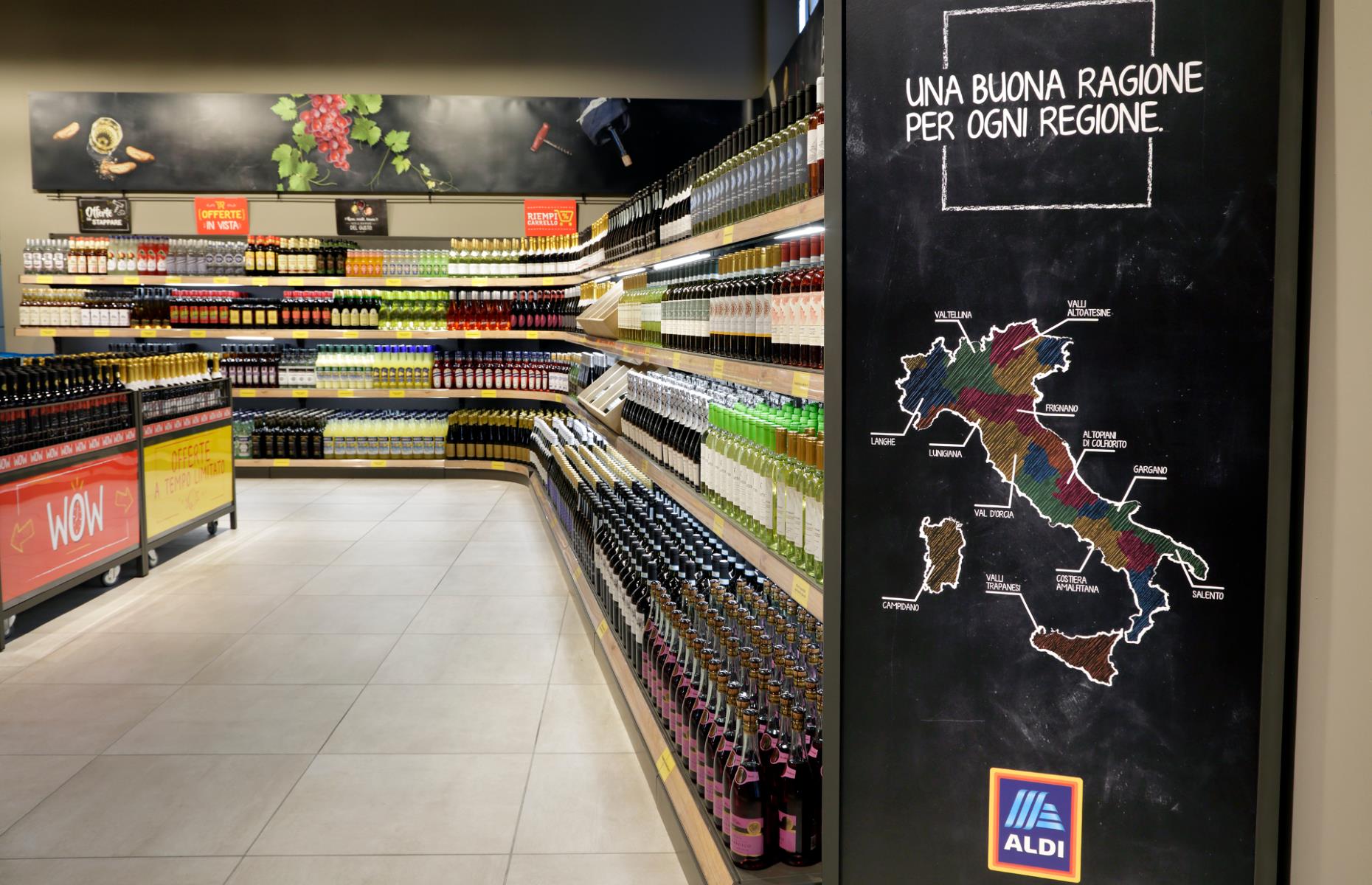 In March 2018, Aldi opened its first 10 locations in northern Italy and throughout the year about 40 more followed. Three-quarters of the products are locally sourced, including regional specialties. Unlike in other countries, each store also has an all-Italian wine cellar. By pure coincidence, Aldi is a fairly common surname in Italy, so to celebrate the launch the company sought out Italians bearing the namesake to star in promotional videos in which they cooked Italian food using Aldi products.

So how exactly does Aldi keep its prices so low all over the world? One of the tricks is to keep a much smaller selection of items on the shelves, offering just 900 core products, which means the company has smaller stores and warehouses, keeping rent prices super-low. Plus, the store doesn't stock many big brand names, making more room on the shelves for its cut-price own-brand items. 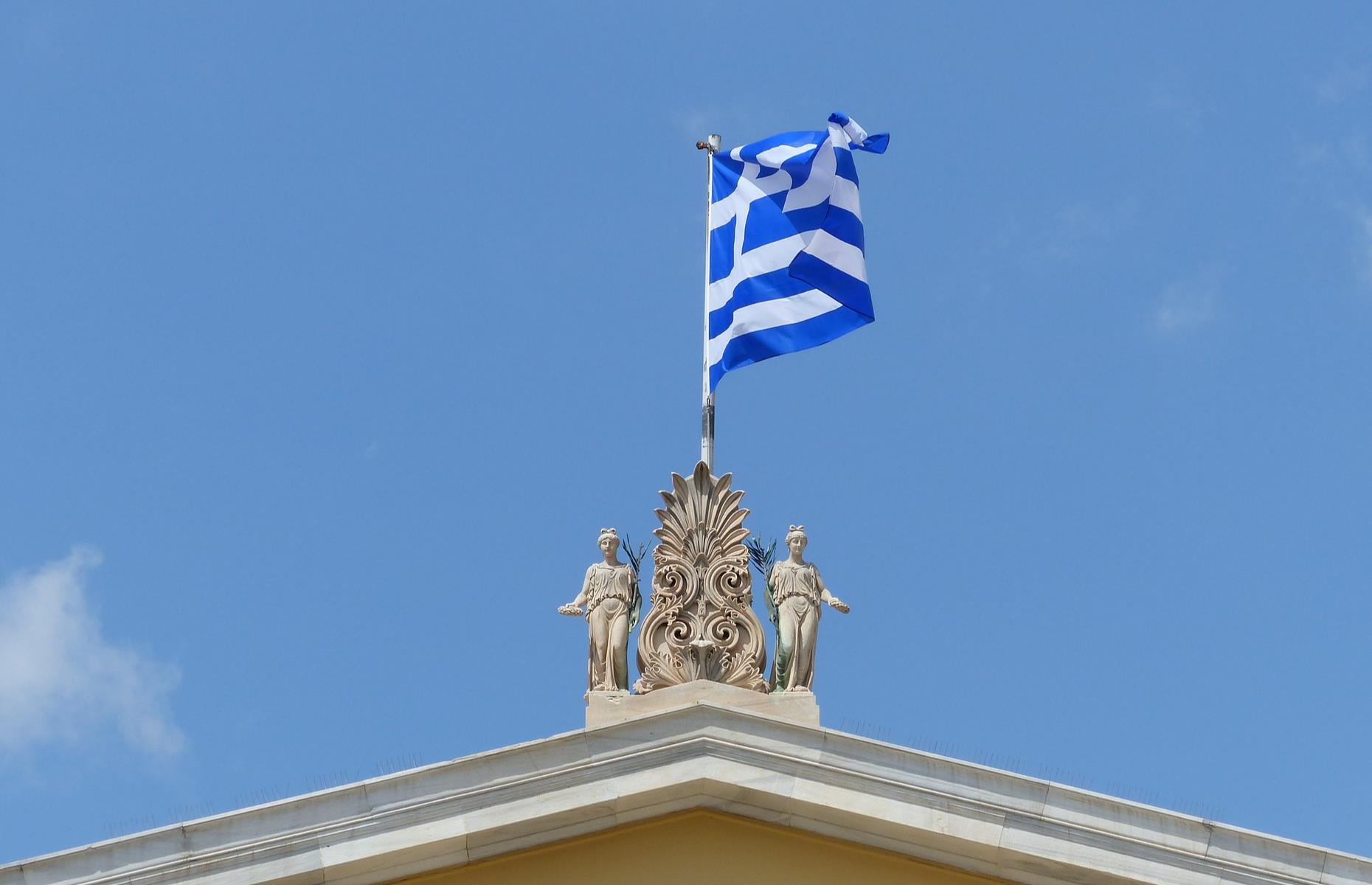 It's not all been plain sailing for the Aldi Group, though In 2010, Aldi Süd pulled out of Greece after just two years having invested an estimated €800 million, equivalent to €914.5 million ($1.1bn/£837m) in today's money. Reports from Greek media suggested that the retailer could not compete with fellow German budget chain Lidl, which had an established presence in the country.
Features

One of Aldi's most recent achievements is the expansion to the Far East. In June 2019, the chain opened its first stores in China. The two Shanghai supermarkets not only look different to its European counterparts, with a more upmarket aesthetic, but also offer a large fresh fish counter in addition to the usual Aldi products, which have been imported from Europe. This is to attract the Chinese middle class to shop there. Today Aldi has seven stores in China, and has plans to increase that number to 50 to 100 further outlets in the coming years. 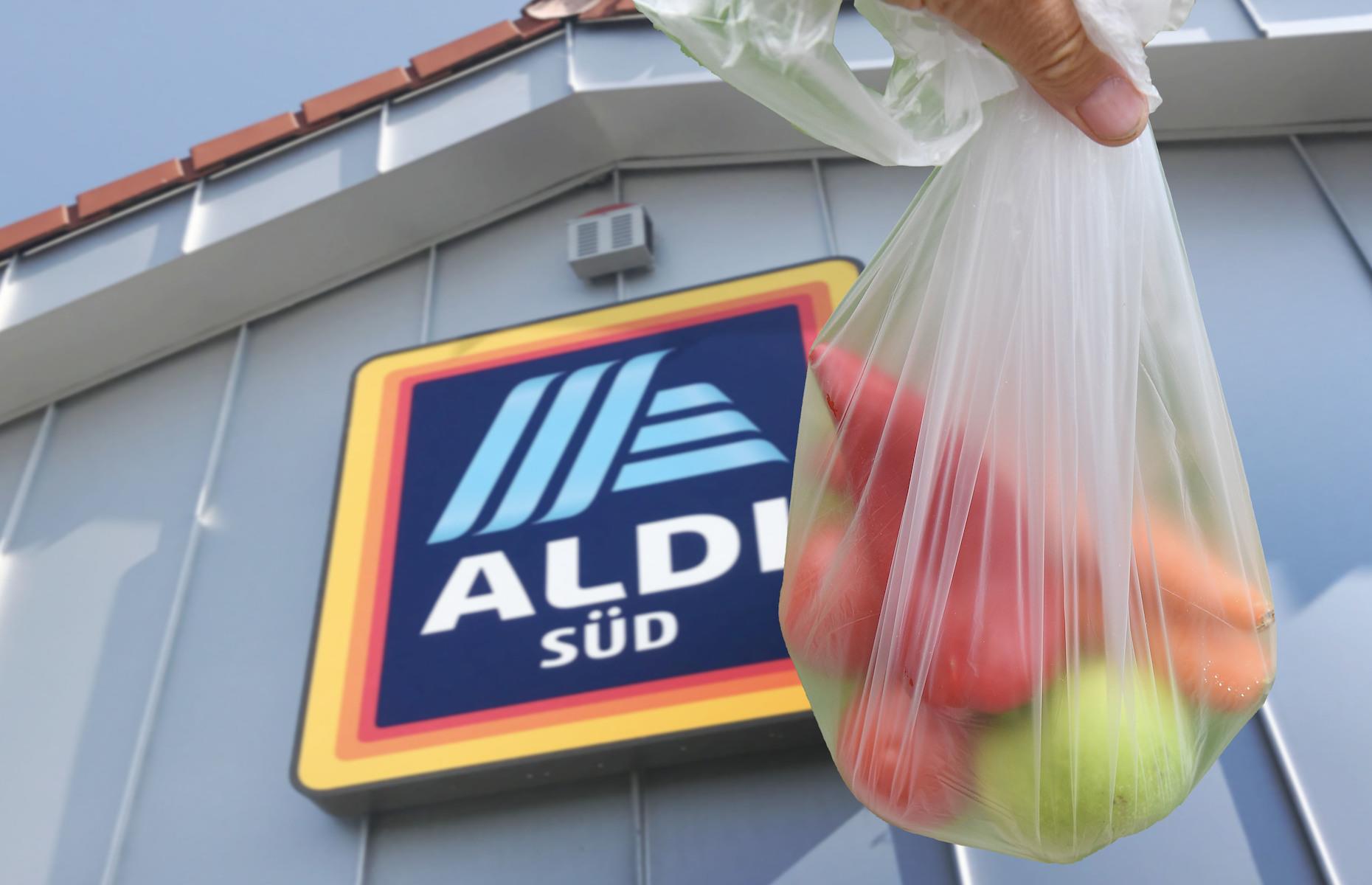 In summer 2019, a new Aldi environmental campaign aimed to tackle plastic usage. In Germany, the retailer began to charge customers a "symbolic" fee of one cent for each disposable fruit and veg bag used, aiming to cut down on the average plastic bag usage of 24 per person. The company has also started offering reusable nets for fruit and veg as an alternative.

The companies trying to rid the world of plastic waste 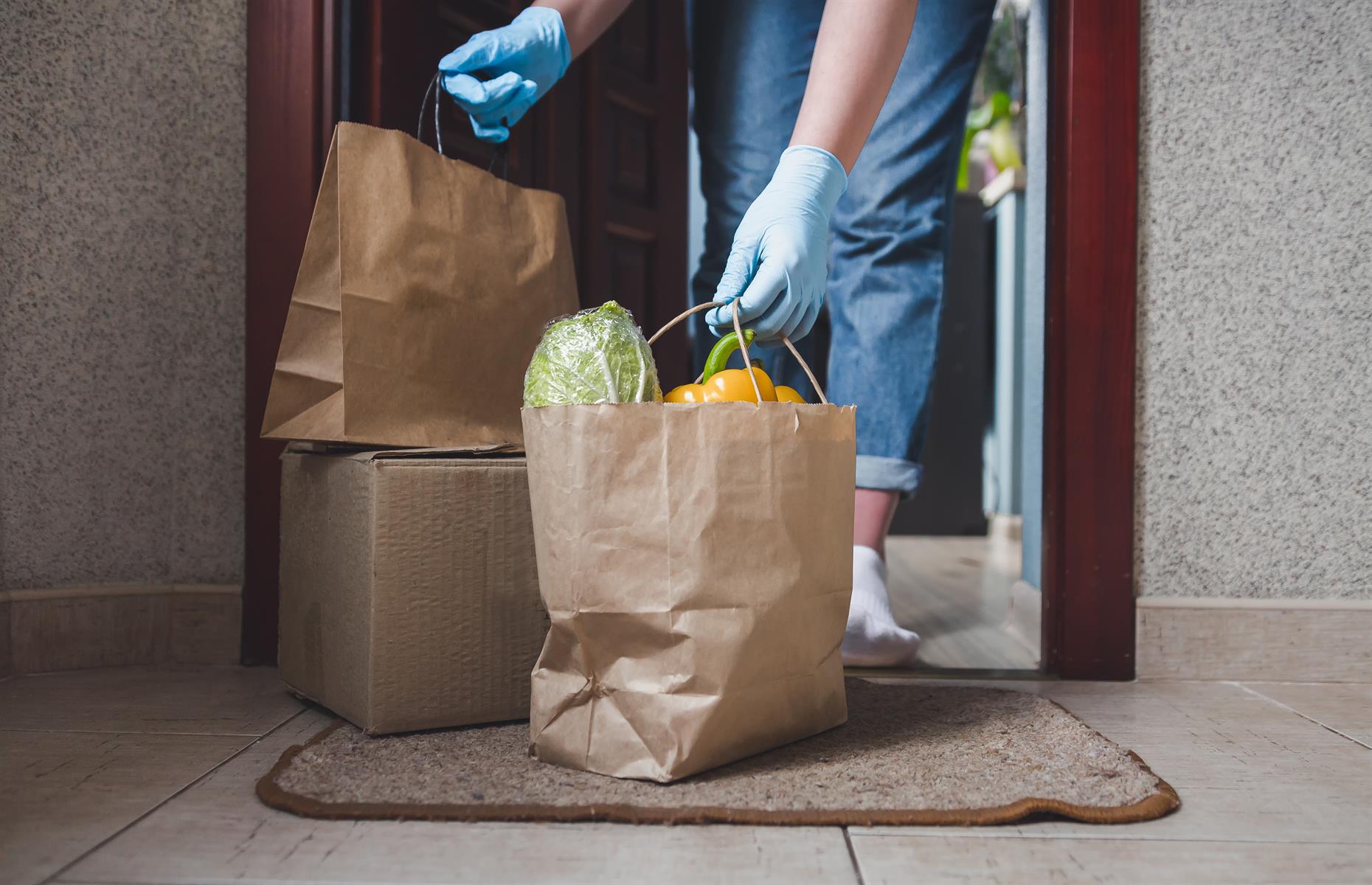 Aldi previously hasn't had much of an online presence, due to the idea that the high cost of delivering fresh food would be incompatible with the budget business model. However, the pandemic and increased demand for delivery services has forced it to change its stance. In the UK, Aldi is currently trialling home delivery with Deliveroo, while in September it launched its first click and collect service. Meanwhile, in the US it offers home delivery through Instacart and has increased the number of stores offering kerbside pick-up to 600. 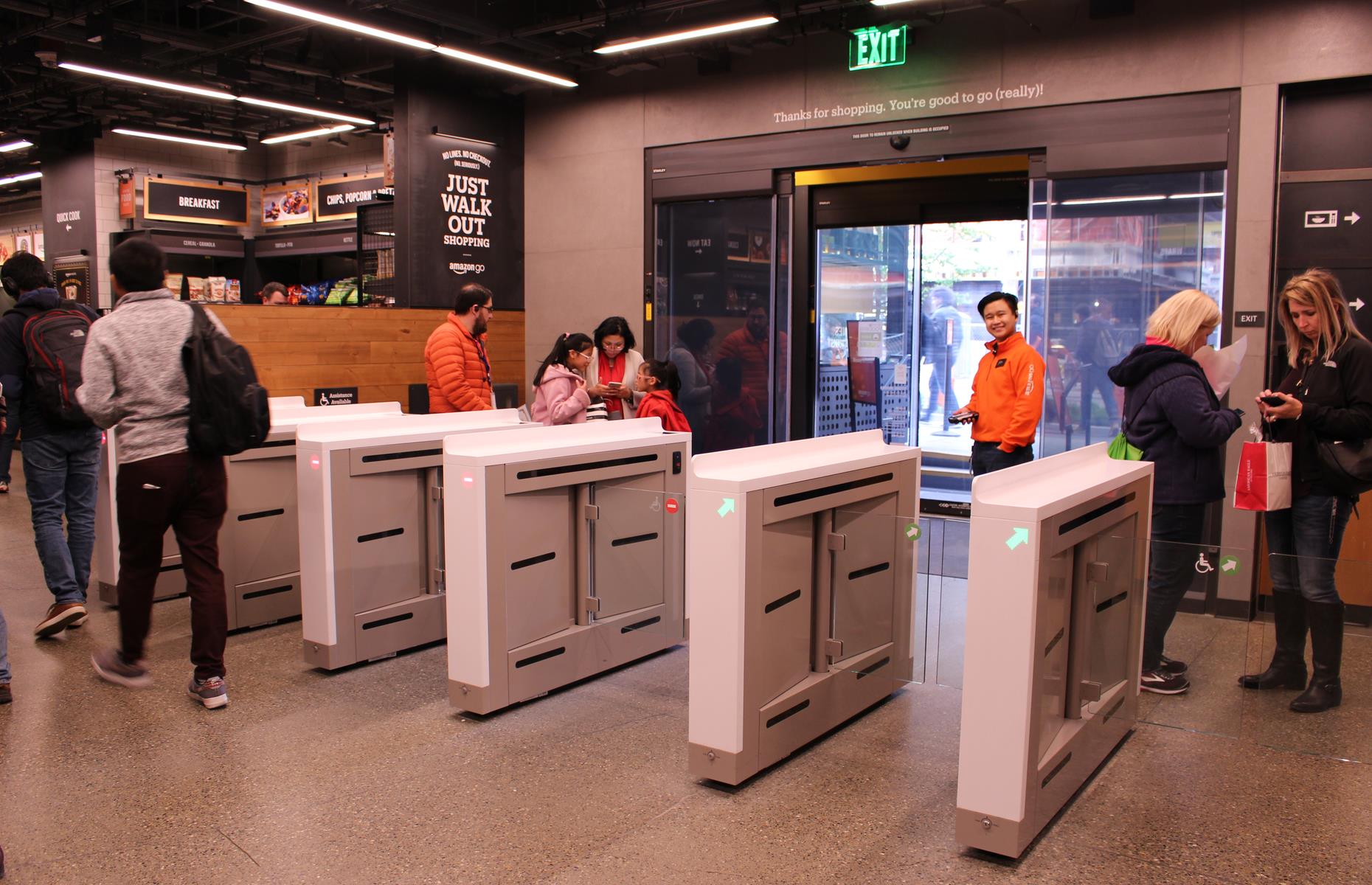 Aldi is allegedly developing a checkout-free experience for shoppers, similar to rival Amazon Go (pictured), according to Charged Retail, which reports that Aldi Süd has put out an international call for tech developers and AI experts to work on the venture. However, this has not yet been confirmed by the elusive company.

Founders pass on the reins

In 2010, Theo Albrecht died a very wealthy man aged 88 – the former Aldi Nord CEO was ranked by Forbes as the 31st richest person in the world that year, with a net worth of $16.7 billion, equivalent to $19.9 billion (£15.6bn) in today's money. The co-founder and his brother had already retired as CEOs in 1993 and private family foundations now control the supermarket empire. When Karl Albrecht (pictured) died in 2014 at the age of 94, the former Aldi Süd CEO was the richest man in Germany with a personal wealth of $25 billion (£19.6bn).

The shocking will of the Aldi 'grande dame'

But behind the scenes of the Aldi empire not everything is so rosy. The will of Theo Albrecht's widow caused a family outcry when she died in November 2018 . The so-called Aldi 'grande dame' Cäcilie Albrecht settled a score with the five children of her late son and his widow Babette (pictured), accusing them of lavish spending out of line with the company's frugal philosophy. Cäcilie therefore excluded her son's offspring and her daughter-in-law from any future roles in the firm. Babette and her children deny any wrongdoing. 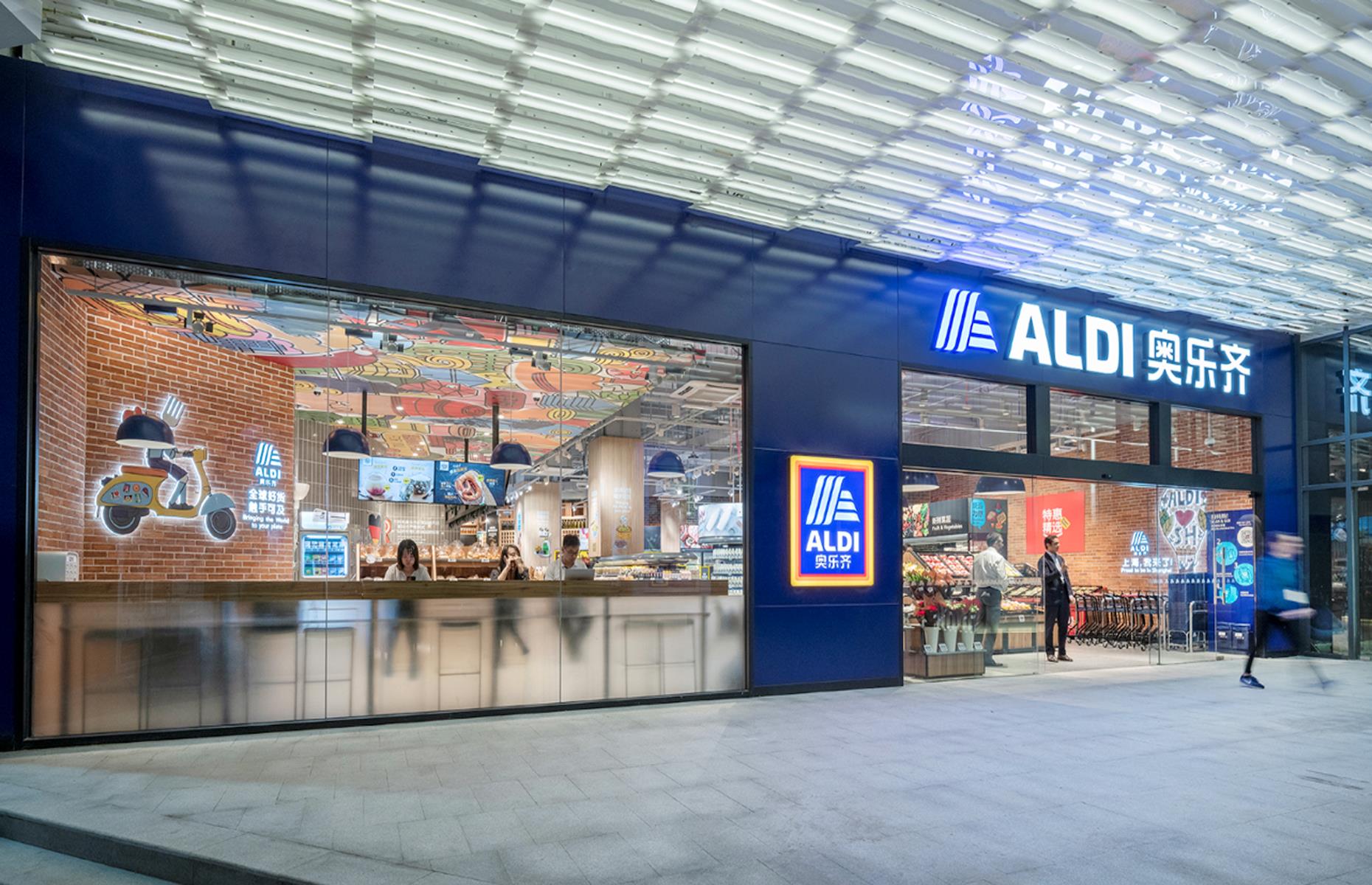 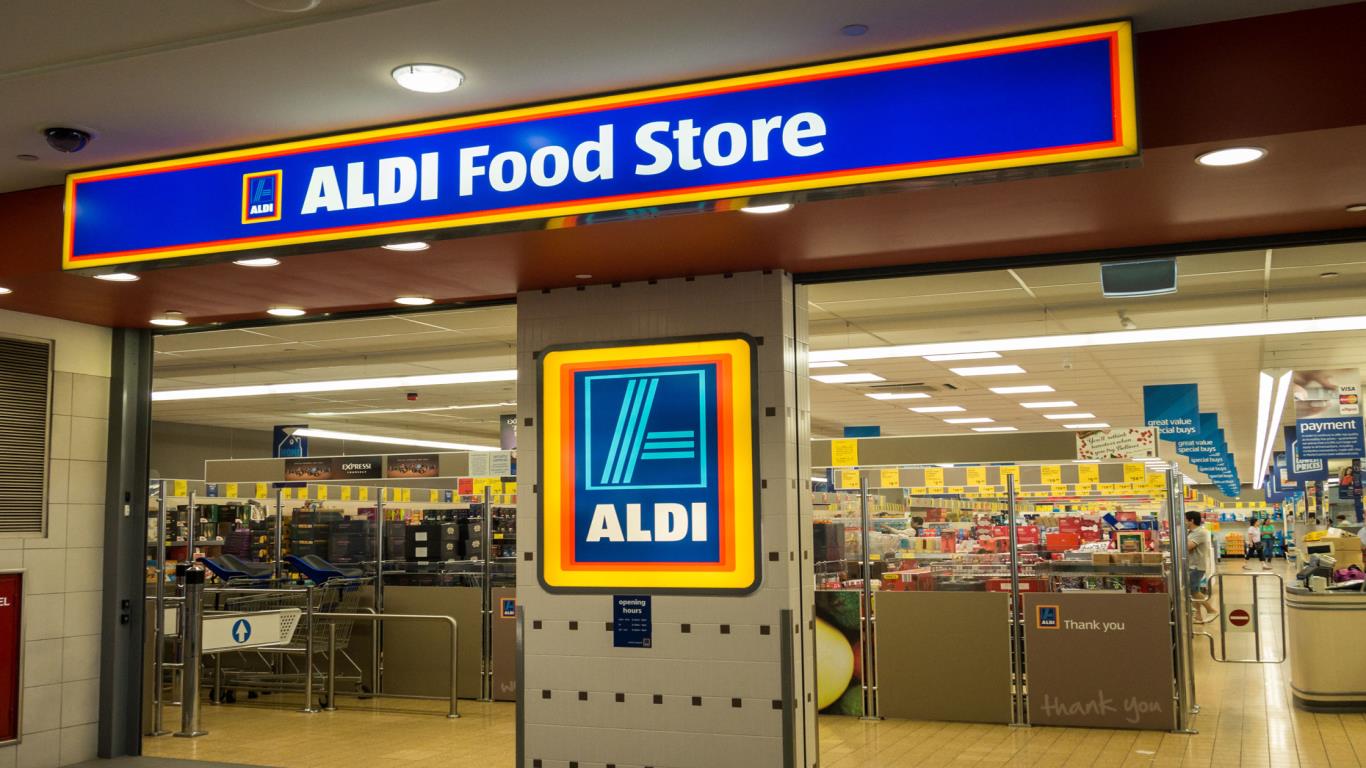 In addition to operating the stores in China, Aldi Süd is now responsible for the Aldi stores in Southern Germany, the UK, Ireland, Australia, Switzerland, Hungary and the US, as well as the Hofer chain in Austria and Slovenia. 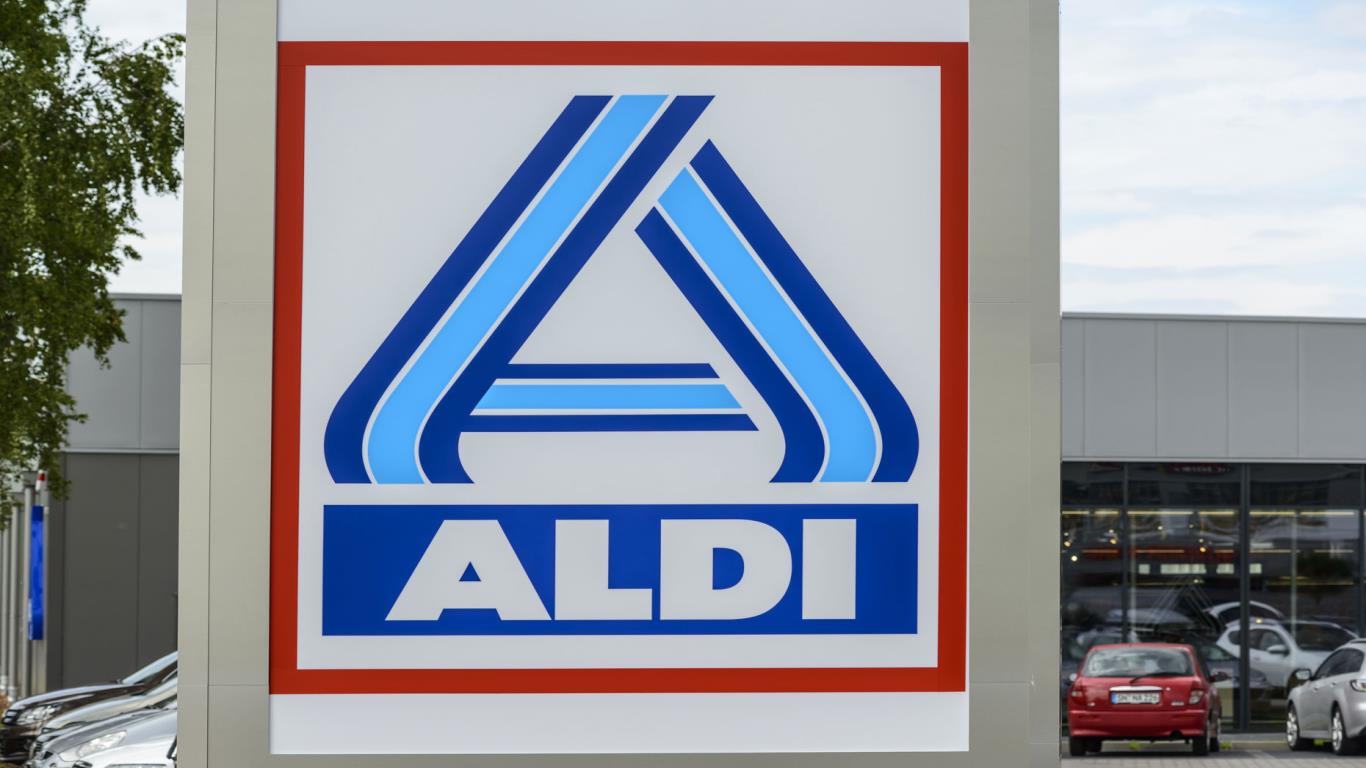 Aldi Nord looks after Aldi stores in Northern Germany, the Netherlands, France, Spain, Denmark, Poland, Portugal, Belgium and Luxembourg, as well as operating Trader Joe's in the US. 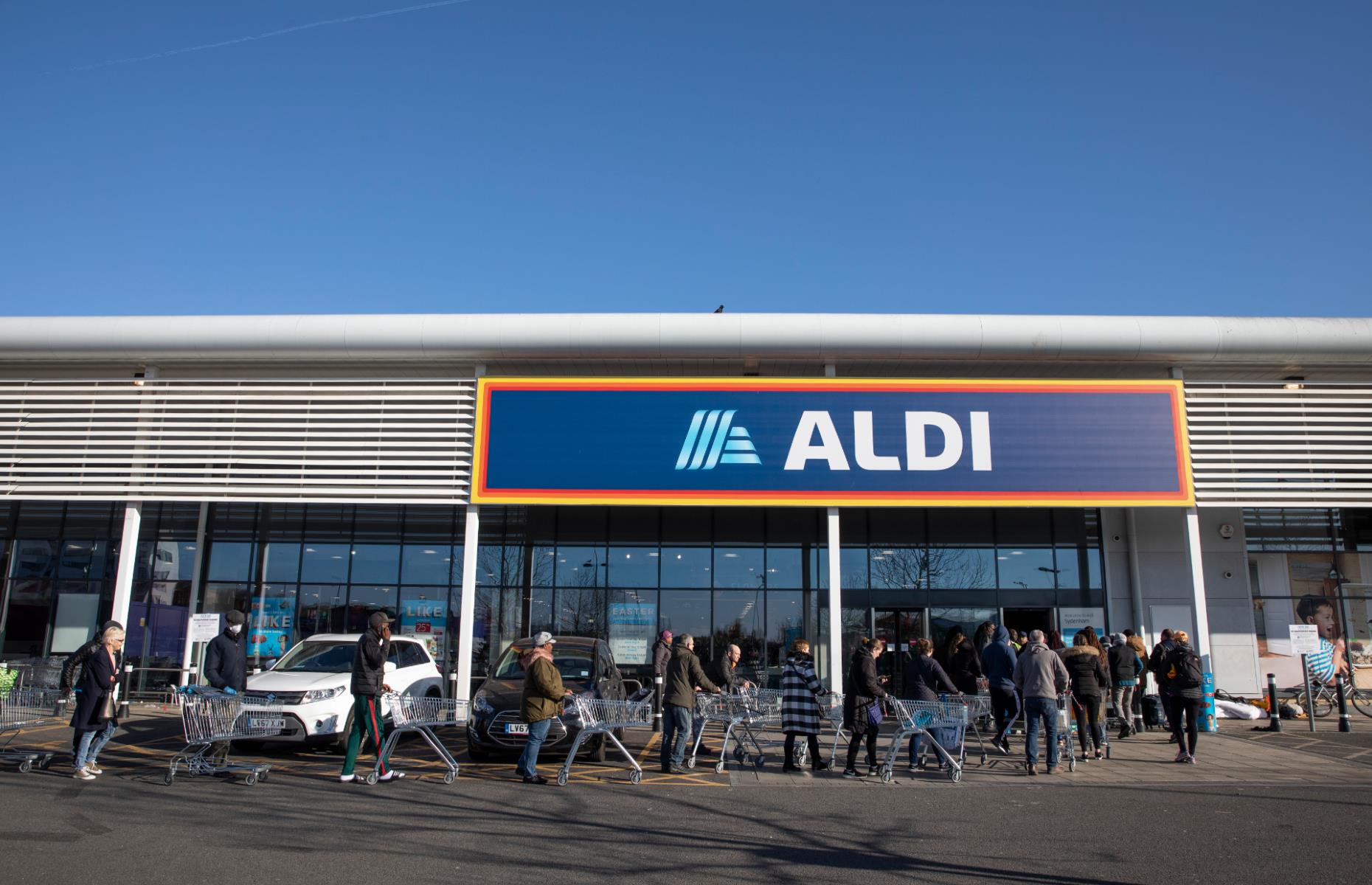 The pandemic has brought mixed impacts for the business. In the UK, rival retailers Tesco and Sainsbury's increased sales at a faster rate than Aldi for the first time in a decade, with online shopping aiding the larger chains' boost. Meanwhile in the US Aldi seems to have bucked the trend of companies closing stores, as it's on track to have completed 70 store openings by the end of this year. The company doesn't share its financial data but analysts suggest its low-cost model will allow it to weather the twin storms of the pandemic and recession.

Now discover the 50 companies that rule the world today